Wednesday was our final day in the interior on this tour. How could we follow up double marten action from the day before? Well, we did our best to come up with something good. You decide how we did.

We were expecting cold and sunny skies on Wednesday. We got the cold, but it was overcast with flurries as we entered the park. Yellowstone: where weather forecasts go to die.

The landscape reset I always talk about following fresh snow is a boon, but yesterday’s dearth of activity on the Madison worked in our favor on this day, giving us a second chance to spot fresh tracks. There were no additional bobcat tracks near the spot we found them on Tuesday, so we only made one pass before continuing eastward. Our allotted time was a bit shorter with a long drive around to Gardiner scheduled at the end of the afternoon, so we didn’t want to linger too long.

On our way down the river valley, I noticed some odd tracks heading into the trees. Bigger than the canid and cat tracks we’d been seeing, but not matching the messy ungulate tracks we’d found either. We cruised quickly by though, and by the time I gave it more thought, we were well past. I made a mental note to check on those later when we passed back through (spoiler alert: the note accidentally got flushed).

Since we had not yet had the opportunity to get closer to the southern geyser basins, we chose that route for our final morning in the interior. Our quick commute to Madison Junction meant we were the first coach heading south. You don’t necessarily expect to see a ton of wildlife along this route, but it’s sometimes there… and the scenery in winter can be quite dramatic.

We made several stops, and found a few surprises along the way. Frosty bison dotted the landscape. When combined with thermal steam, there was potential for some very cool photos. The only problem was the sun, which struggled to break through the cloud cover and provide a bit more contrast in the billowing clouds of vapor. 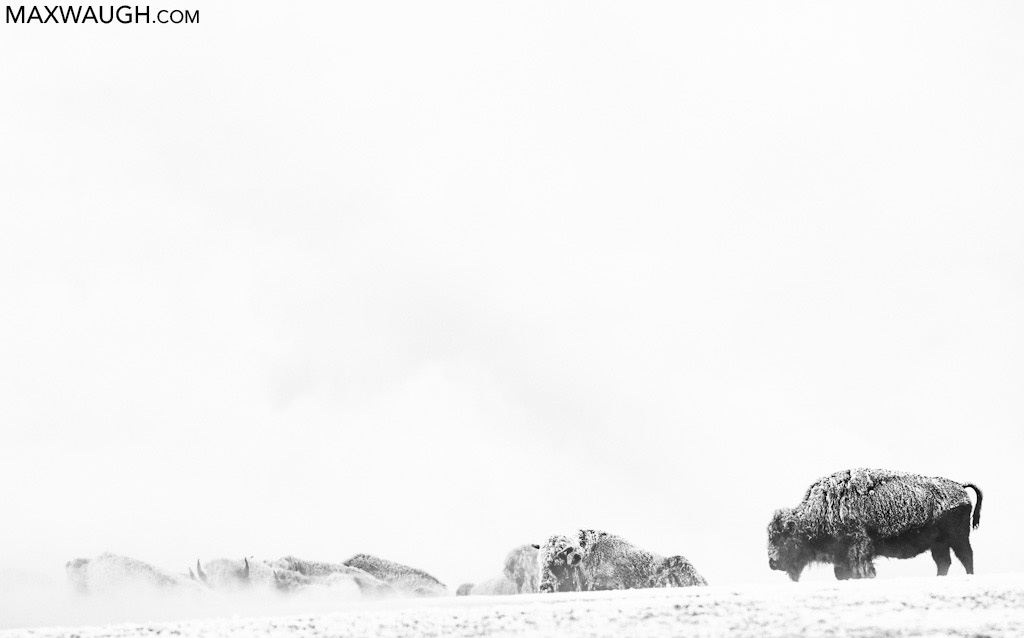 At the famed Bobbysocks trees, we discovered an odd set of tracks emerging from the tiny creek that runs through the trees. Slide marks went downhill on the opposite side of the road. An otter? Here? Wild.

Out near Fountain Flats, a distant red fox patrolled a distant meadow.

We continued to stop for the frosty scenery and the equally frosty bison. So much good stuff. 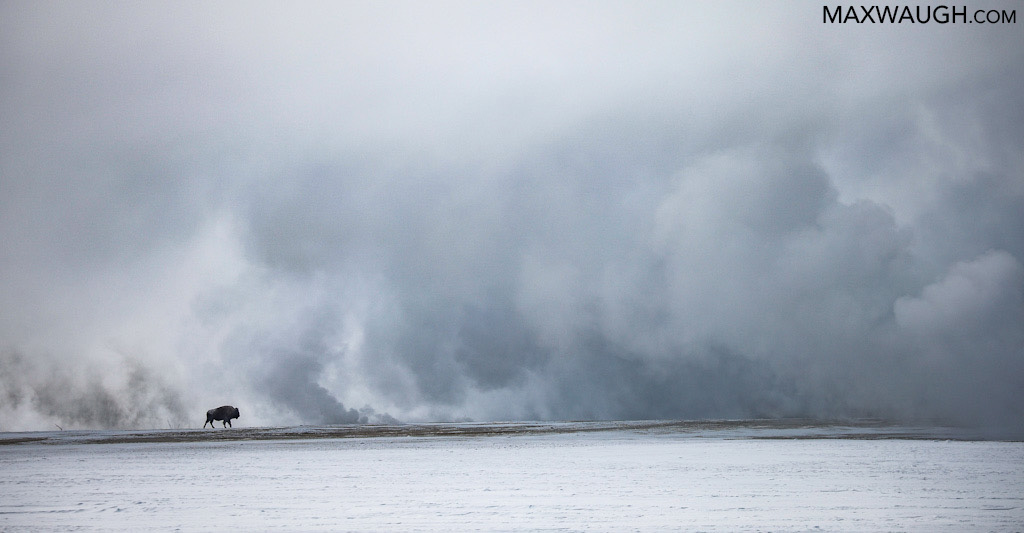 On our way back near Fountain Flats, we discovered fresh tracks coming to the road from the open prairie, crossing and heading toward the nearest creek. An otter?? HERE???? That is one confused mustelid. 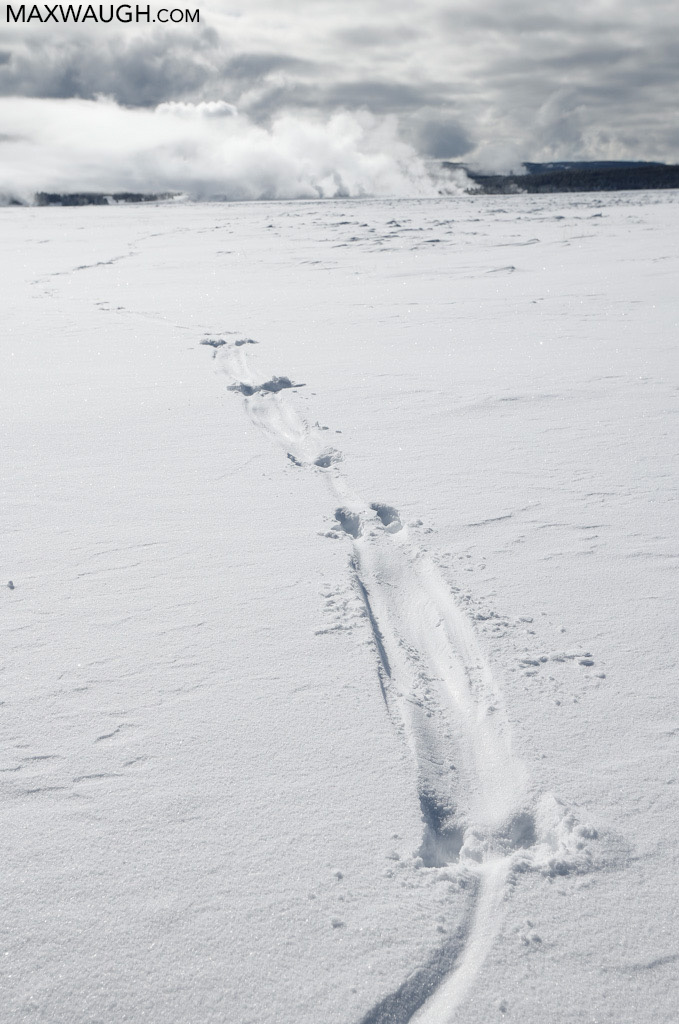 The fox was still active, but distant. It pounced numerous times in one particular spot before finally coming up with breakfast. Just a bit too far for photos, unfortunately.

It was still relatively early, and once again it was decision time. We could either hustle north and east for one final foray into Hayden Valley, or concentrate on the west side in our remaining hours. Perhaps a cat (or something else) would appear once the morning coach and snowmobile traffic had passed through…

We decided to check the Madison one more time. A lunchtime stakeout at a potential cat hot spot seemed like a good idea. Alas, it took us a while to get there.

As we cruised along the river, we noticed fresh weasel tracks close to the place we’d seen them (and the animal itself on Monday!) the last two days. We paused, determining which way the tracks were headed, and ended up backtracking a bit to follow them. And then I spied it through a window. Time for action!

Unlike the encounter two days prior, we scored this time. The weasel dove into the snow right in front of the coach, believe it or not, giving us a chance to set up for photos. 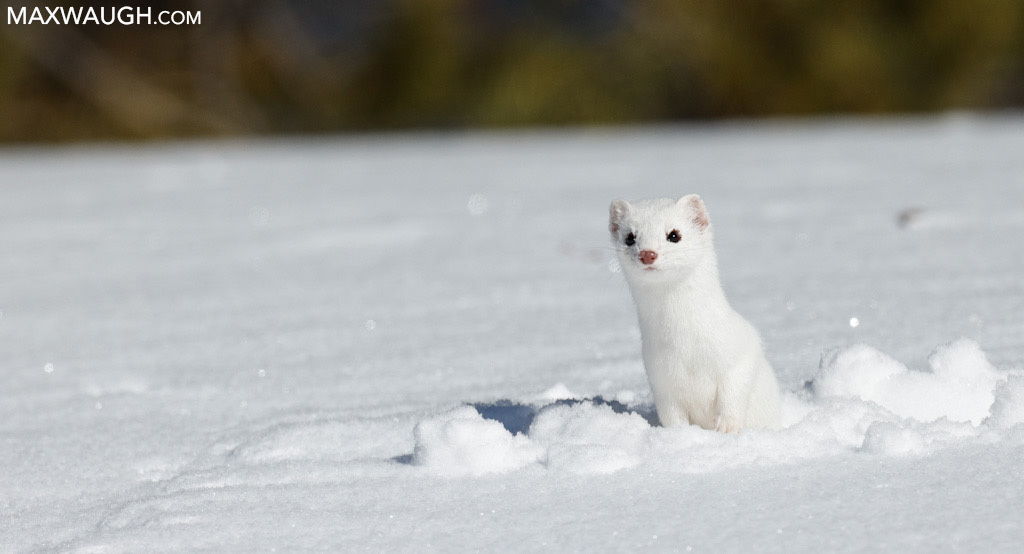 The subsequent ten minutes or so went by in fits and starts. The ermine would dive into snow, reemerge, pause, assess, scamper away, disappear into the trees, and then appear again out of nowhere. 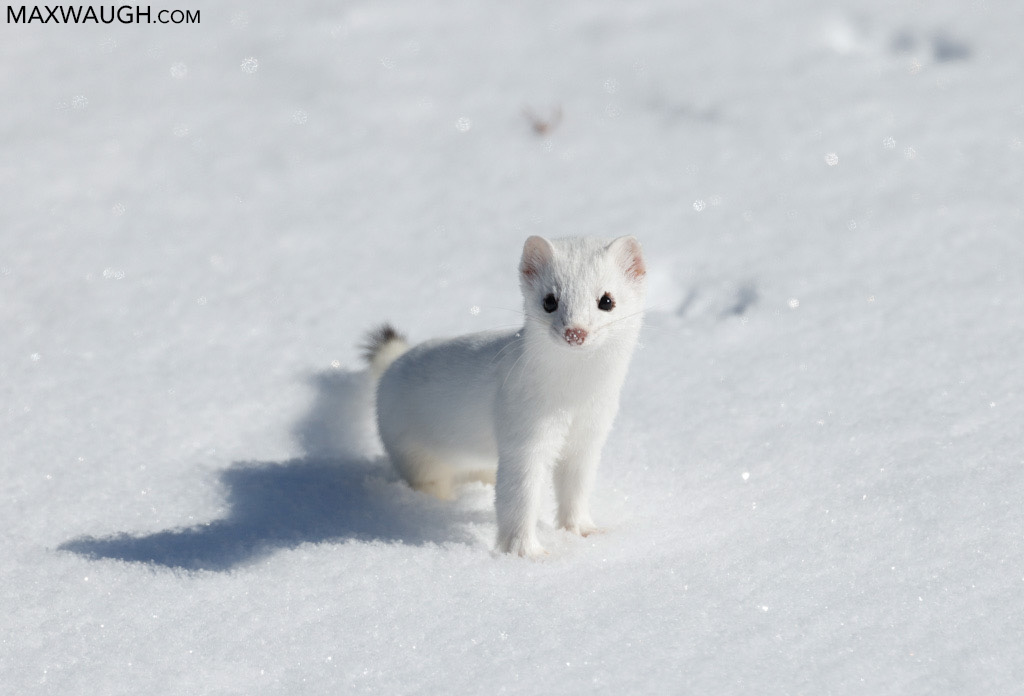 It was an incredibly satisfying encounter. My clients were delighted, and obviously we felt pretty fortunate to have such great mustelid sightings on back-to-back days.

What happened next may not have been as memorable or satisfying, but it could quite possibly be the most unique thing to happen to us on this trip. Remember those odd-shaped tracks I spotted in the morning and promptly forgot? Adam, spied them passing through this time, so we stopped to examine them properly. 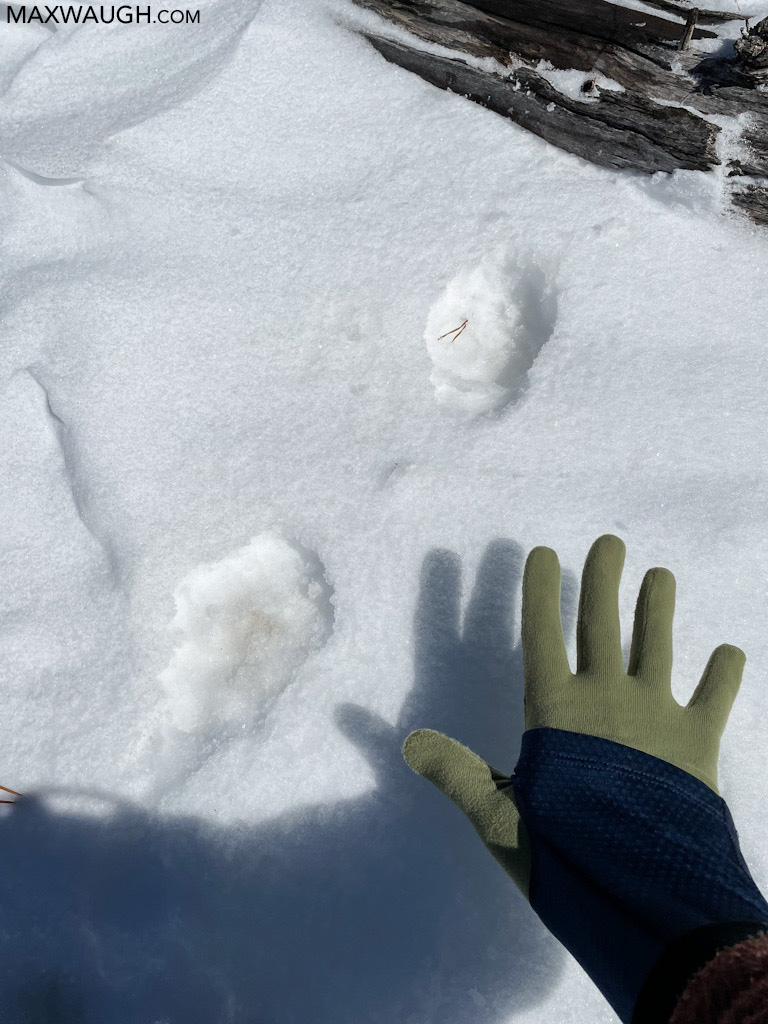 Sadly, the snow was too soft for distinct pug marks, so it was difficult deciphering what we were seeing. However, the size of the tracks and distance between them reminded me a lot of lynx tracks I’ve seen.

We split up to follow them on both sides of the road, trying to get a sense of where the animal may have gone. I traced the southern set to the river, where the animal appeared to have crossed.

We snapped a lot of photos and sent them off to some contacts with tracking experience once we had cell coverage. One response indicated lynx as a possibility, but also wolverine. Indeed, some photos of wolverine tracks we found resembled the spacing and general shape of what we were seeing.

Due to the shallow depth and closer spacing of the prints, I was ruling out wolf. I also didn’t see any sign of tail drag in the snow, so I doubted it was even a small cougar. Lynx and/or wolverine—both extreme rarities in this ecosystem—seemed highly probable.

Our second expert wrote back Wednesday night ruling out lynx, and also suspecting mustelid. Otter or “small wolverine” appeared to be the most likely options, he told us. But with no indication of tail drags or slide marks, even while passing through dense, small pines, an otter seemed less likely to us. Is there a wolverine roaming the Madison????

Did you enjoy this episode of Yellowstone CSI? Well, there were a couple more sightings before we wrapped things up (some of which required additional forensic work).

Our lunch at Seven Mile Bridge was interrupted by a cooperative Brown Creeper, a Hairy Woodpecker, and a coyote dashing down the steep hillside above the river. Afterward, we made one final pass along the river before heading for the exit. But we weren’t done.

A lonely bison calf that we’d been seeing the last couple days (separated from its herd) finally succumbed to the elements… or perhaps to the coyote that was feasting on its remains. It was quite a scene, with ravens and Bald Eagles (and a second coyote) waiting patiently nearby. 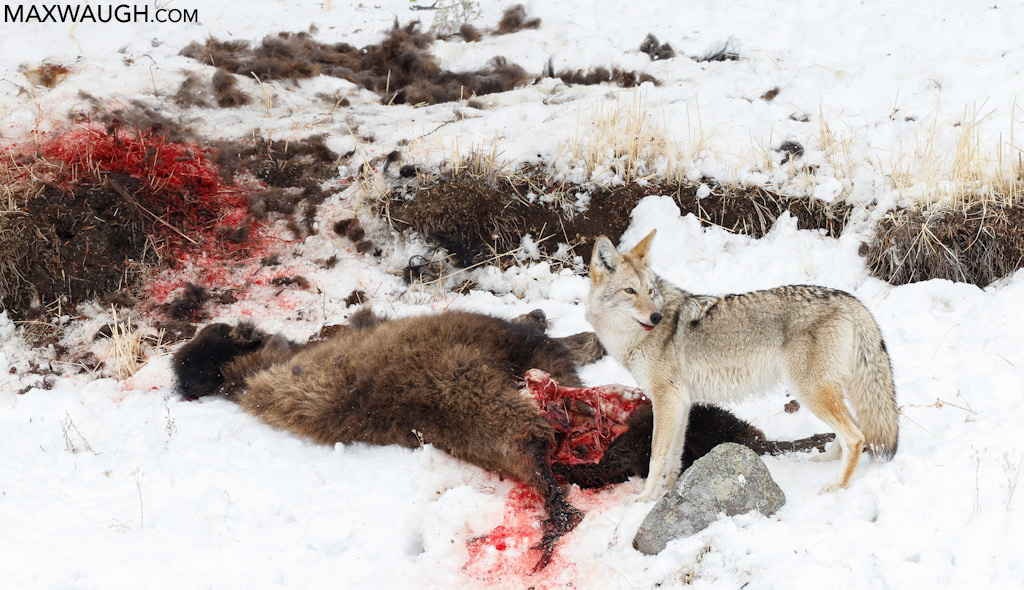 That was it for our time in the interior. We still had a long drive ahead of us, so we returned to West Yellowstone to prep for the next stage of our adventure. We made it to Gardiner in good time, ready to tackle the northern range for the remainder of the week.

What would the northern range offer up today? Whatever it was, it was going to have to wait. We agreed on a 7am start, which worked fine a month ago for getting to the eastern hot spots at first light. A month later, it was starting to brighten significantly by the time we rolled to the gate. Which was fine. I figured we’d take the first morning slowly and see if we’d luck into any sightings in the northwest corner.

We entered the park after I presented all of the necessary documents to the ranger at the gate. As we started driving, I tried rolling my window up… and it refused. Great. I had dealt with this as a passenger on a cold October day last year. It wasn’t pleasant. I looked at the temperature gauge: 3 degrees F. I didn’t realize it was that cold. I guess the window had, because it protested as I tried to convince it to close.

In order to avoid chilling my guests, I parked at the first pullout. It took a good five to ten minutes for the window to finally seal, and we were on our way.

Now, my clients (past guests of mine on other trips) insist they bring an element of good luck to all of their adventures. If that’s true, then they’re more than pulling their weight on this one. We rounded the first bend heading into Gardiner Canyon, and there was a black wolf, right above the road.

It was joined by a gray, and they both turned and slowly walked up and over the hill out of sight. My client was able to snap a couple shots of the black out the window, silhouetted against the sky, before they vanished.

So my good luck charms worked. Or at least, they had sabotaged the car window properly to get the timing right.

We cruised back and forth to see if we could spot the wolves from another angle, but they had disappeared. Onward and eastward.

The morning started cold, and only got colder. The temperature gauge in the car was bouncing all over the place, so we weren’t sure what to believe, but we got to a low of -18F, and later heard someone else reached -24 earlier in the morning.

That’s my kind of weather, but oddly enough it appears to have frozen all the animals to the ground. We saw very little in the first half of the day. Making the occasional stop for winter scenery, we patiently waited for the action to pick up.

During a second pass over the Lamar River, I spied fresh otter slide that wasn’t there before, but we never found who left it. It’s been pointed out to me that I’m doing a great job of finding otter slide on these trips. The animals who left them? Not so much.

In the afternoon we had a very distant view of wolves surrounding a herd of bison, and later in the Lamar we found both a roadside coyote and a distant red fox on the valley floor. Three Dog Day!

We went pretty far into the northeast, where it was starting to snow and blow, so we got out of there. On the way back, the fox was still out on the valley floor, barely close enough for some minimalist compositions. 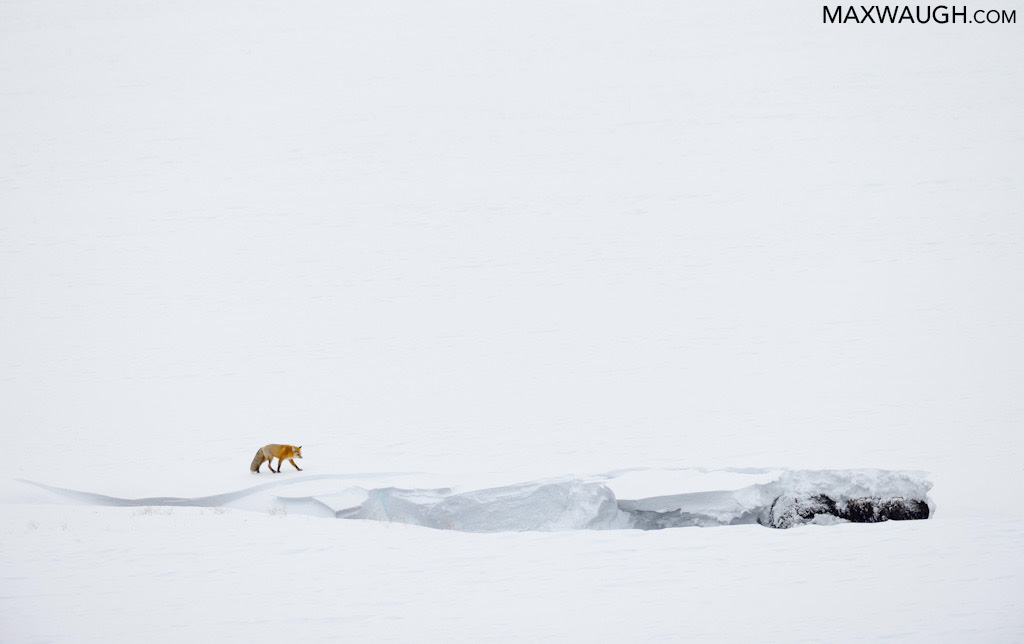 Ultimately, the northern range proved to be quieter than the interior on Day One, but that wolf sighting to kick things off made it a pretty special day nonetheless.