We were sure to start a bit earlier on Friday, wanting to make a quick check for wolves before heading east at first light. No canids present initially, but we’d make up for that later.

Our trip along the northern road was fairly uneventful. There was little traffic, and fewer excuses to stop. In fact, it wasn’t until we arrived at Elk Creek that we found something that made us pause. A moose was quickly disappearing into the thicket.

Much later at the Confluence, a red fox was out hunting near the willows. Finally, something to photograph.

Parking down the road, we began to walk back a bit to get closer. The fox had other ideas, however, turning tail and trotting off at a heightened pace. We were still some distance away at this point (300+ yards?), and while I’ve seen skittish foxes, this caught me off-guard. We piled back in the car.

Driving down the road, we quickly learned that we weren’t the ones that had spooked the fox. There was a coyote emerging from the willows and walking in the fox’s direction.

Just as we entered the next pullout, we spied the fox, curled up behind another stand of willows. It sure looked like it was hiding (though the strong winds today didn’t exactly make the conditions pleasant, so it had a good excuse to curl up anyway!). With thoughts of last month’s wild coyote/fox predation fresh in my mind, I wondered what might occur if the two species met this time.

The fox sat still. The coyote approached. Orange ears perked up as the fox peeked at its larger cousin. 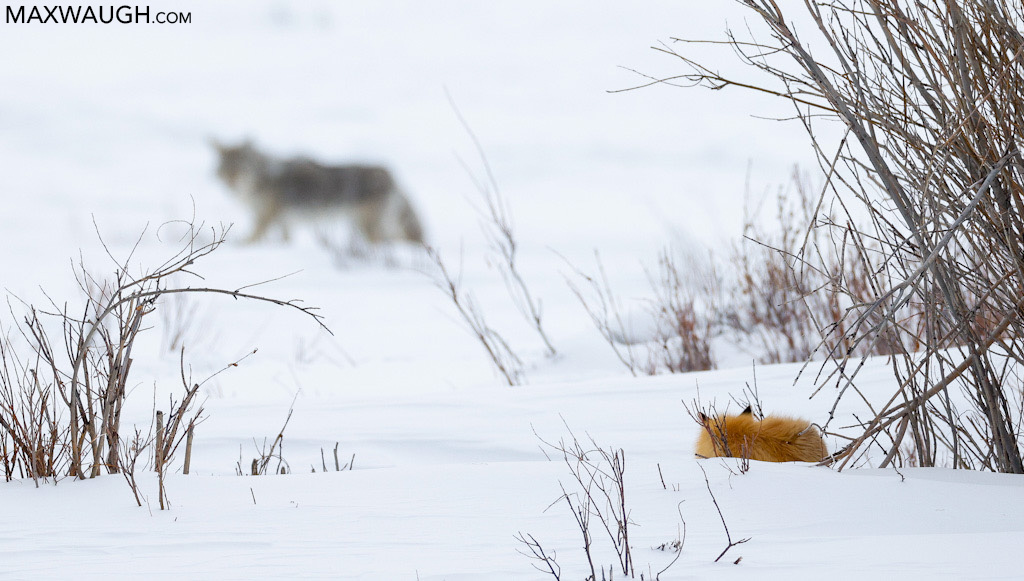 The coyote simply walked by, uninterested. Relief for fox lovers everywhere, I suppose.

Once the coyote trotted out of sight, the fox stood up and resumed its exploration, heading off to the southwest. We were delighted to get our closest shots yet of this species, and returned to the car to pack up. That’s when another member of the roadside audience spoke up. 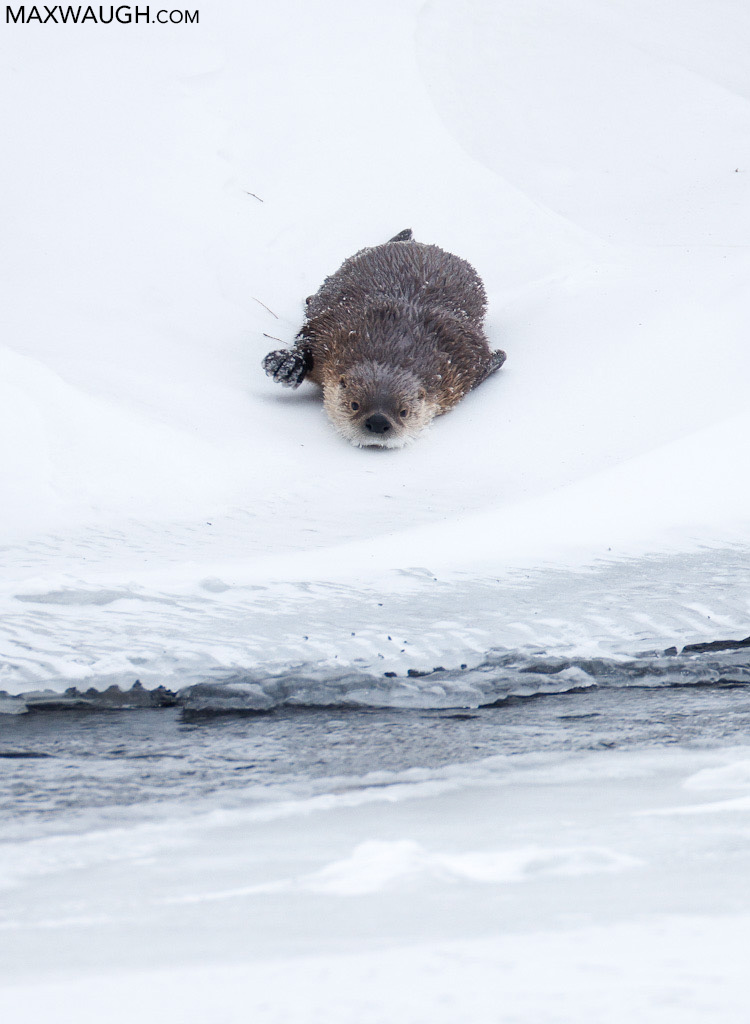 Note that he did not say “otter slide!” Even though you obviously expected that given my track record on this trip. The otter actually stuck around in one thawed expanse of the river for a short while, allowing us to snap a few photos. It disappeared at one point for several minutes, at which point we wondered if the show was over.

Nope! Eventually we spied a brown head peeking back up out of the water. It crawled back out. 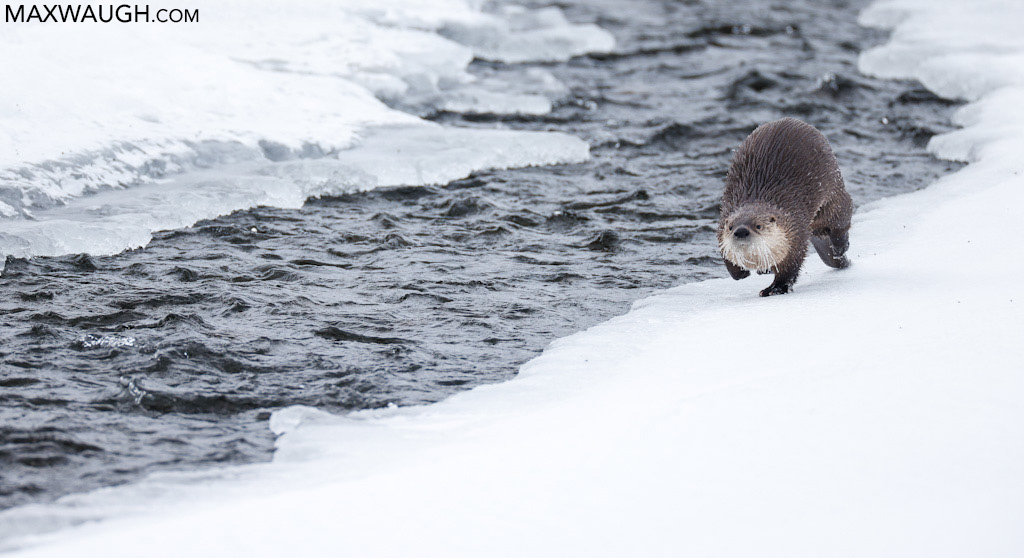 Then down again for a minute or two. The next time it emerged, I first spied a golden flash. Odd color for an otter. Oh wait, the otter had hauled out a sizeable trout!

Rather than snack on its catch right there, it dove back in and vanished. Private dining this morning.

We were thrilled to get even more mustelid action on an already-weasel-heavy trip. This has definitely been my best mustelid trip to date!

Satisfied, we continued on to check around Round Prairie and Pebble Creek. After all, we’d gladly accept another fox encounter there. The expanse was empty, however (aside from distant bison), so we started to backtrack. Approaching the Confluence, I spied… the fox! Again! It had circled all the way around to start another circuit, apparently. Maybe this time we’d get better close-ups.

So we parked, set up, and waited. Indeed we were afforded better opportunities. 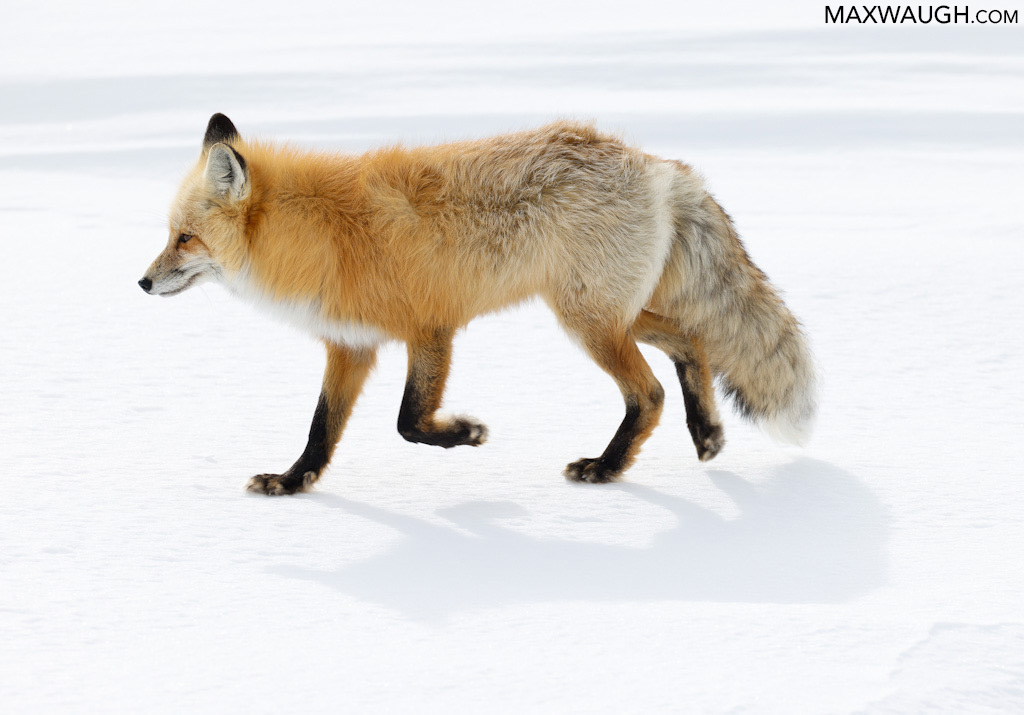 The fox did mouse one time, but we were only offered a backside view. It then trotted along the frozen creek bed before climbing the hill above the road and heading out of sight.

As we packed up to go, a distant moose strode through the snow toward the willows. A short time later, we learned that we had just missed the central Lamar fox we’d seen on Thursday. The fox action was seemingly non-stop. As proven by the fact that we saw another one out in Little America.

Two coyotes trotted off together a mile or so to the west. Back on Blacktail, we saw yet another coyote enduring the blustery wind and snow.

Our afternoon was a bit more low key, but we did see the Lamar fox out in the flats again when we drove through. Friday was definitely a day for the dogs, even without a wolf sighting (we won’t tell them that the otter was probably the highlight!).

What would our final day of the tour (and my final day of this second winter trip!) have in store? For starters, snow. There was a surprising layer of it on our vehicle when I stepped out this morning. It also did a nice job covering the new ice that had formed on the walkway. Fortunately, nobody was awake to see me slip and land on my elbows walking back to me room.

Much like yesterday, the drive to the northeast passed with little fanfare. Before we got to the Confluence (the site of yesterday’s primary action), we did stop in the Lamar to photograph a herd of semi-snowy bison above the road. 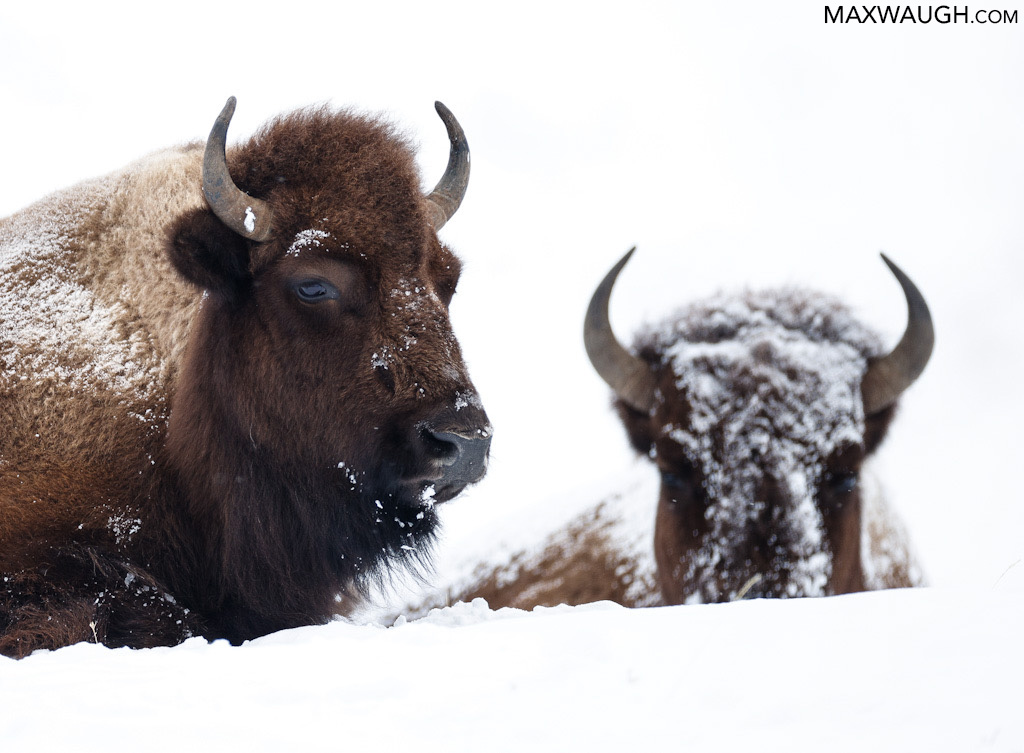 At the Confluence, we pulled over not for fox or otter, but for some bighorn sheep, which had descended to a favorite cliff above the road. Since we’d yet to photograph rams on this tour, we stopped. I hung back from the other photographers to keep an eye on the creek and the willows behind us, in case someone popped out.

You know, like that otter that emerged about 30 yards away.

Unlike yesterday, it didn’t stick around, so there were no photos this time. But soon we did have a red fox again. 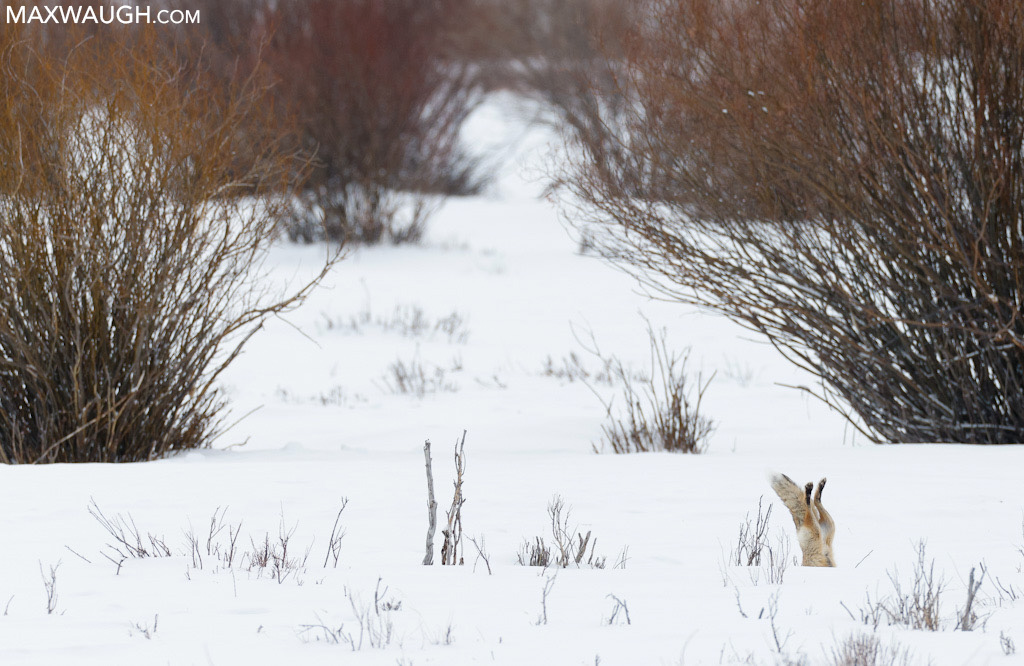 In fact, we eventually learned that there were two foxes, as one vanished to the south and magically “reappeared” farther north. That may have explained yesterday’s fox sightings, when it seemed the fox had oddly done a full circuit around the willows.

After completing our usual first trip to the northeast (turning back at Pebble), we came back through for our second pass. People were scattered everywhere. Sheep or foxes occupied their attention. The otter had not reappeared.

Rounding the bend past the Confluence, we saw that people had poured cocaine on their Saturday morning Cheerios and were, perhaps, a little out of control. 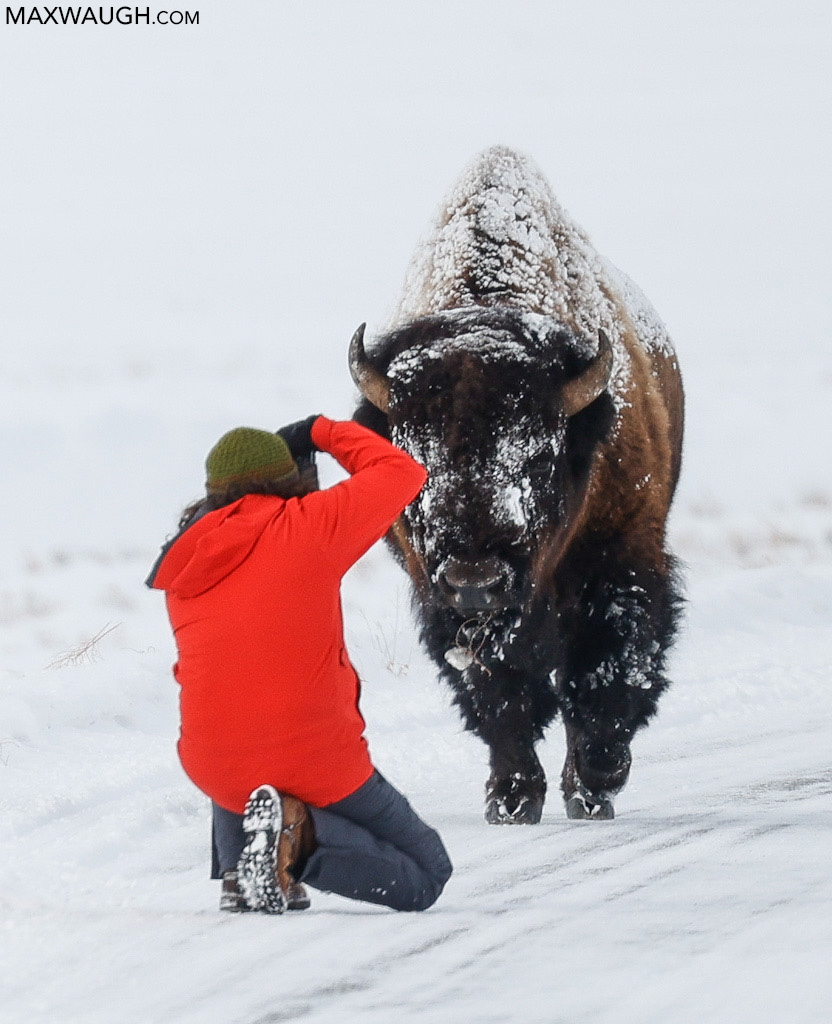 “It seems a fine line between being a matador and being a rodeo clown.” – Jase Robertson

Update (March 2, 2021): After sharing the above photo on social media, I actually had people accusing me of a) faking this photo (“looks PhotoShopped!”), or b) being IN the photo. Which begs the question: What would the motivation be for sharing such an image, doctored or not, in that case? Here’s a handy guide to tell whether it’s me doing something this dumb: 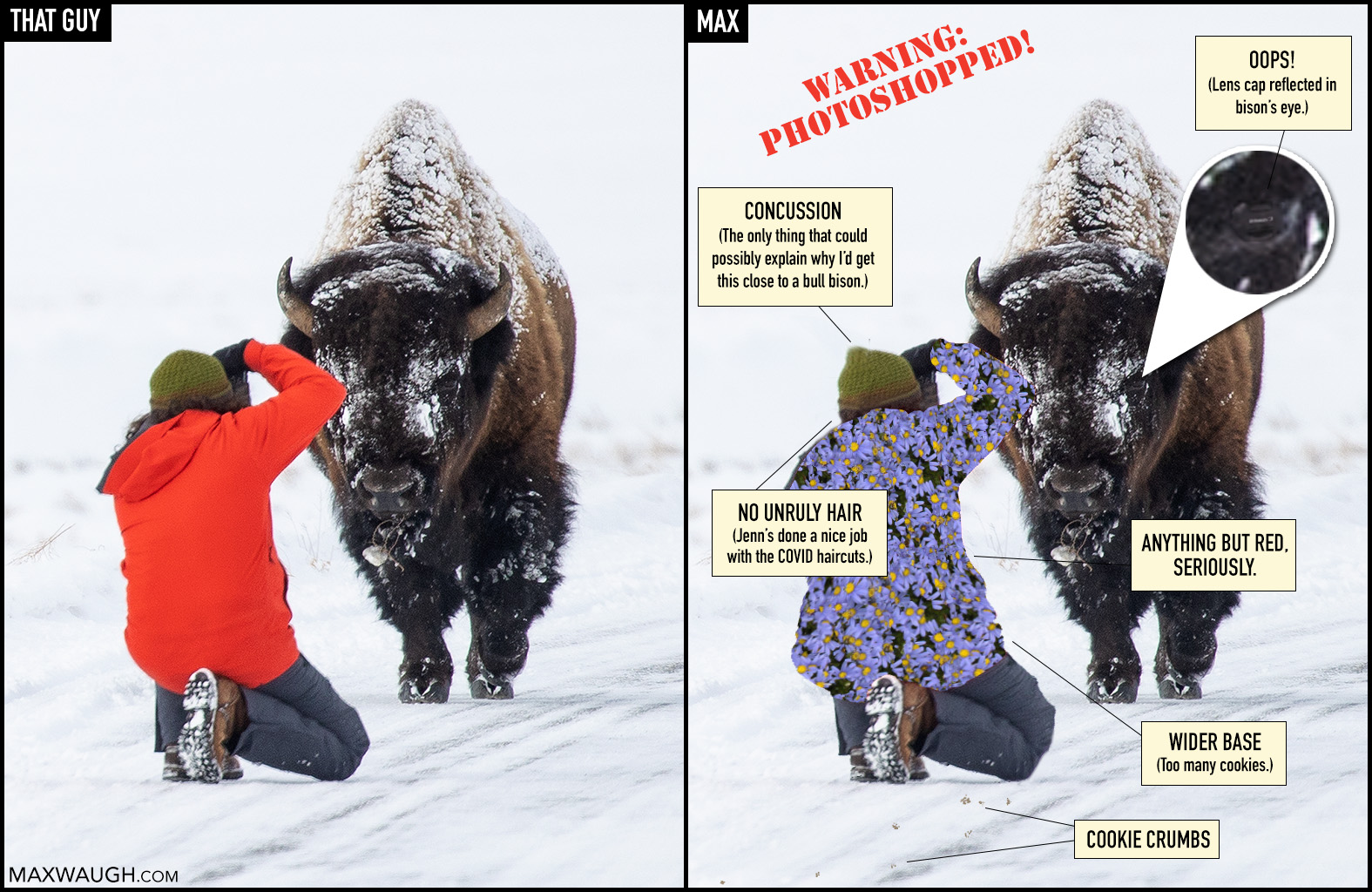 Farther west, we saw two people standing roadside with their cameras out. I scanned the field to the north, searching for the object of their attention. How silly of me to think I should look out that far, when I should’ve looked a mere ten feet in front of them, where a fox chowed down on a meal. We didn’t leave the car, and were able to snap a couple quick photos under more reasonable circumstances. 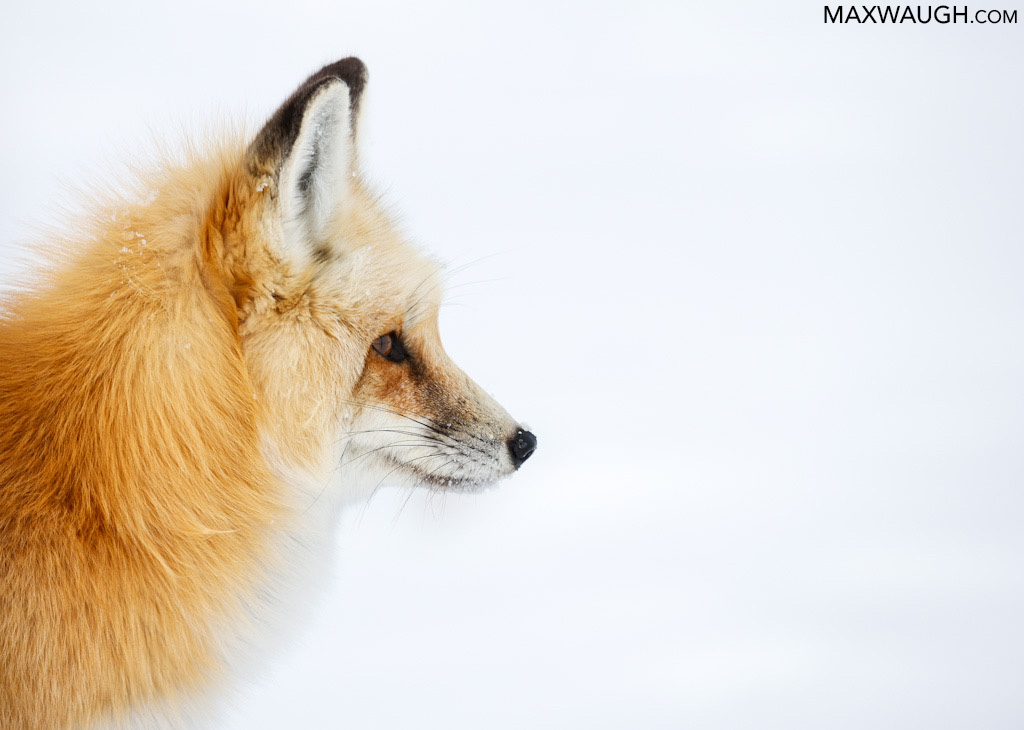 Ironically, the same people who would walk right up to a fox were then too afraid to pass a small herd of bison that had vacated an entire lane for them to go by in their vehicle, thus snarling traffic for several minutes. The bison were eventually gracious enough to make a little extra space when they saw their hint was not being registered.

We had to get up to Silver Gate today, so we made one more eastward run. The sun was just coming out and several coyotes were out and about. One crested a hillside above the road just as we passed. 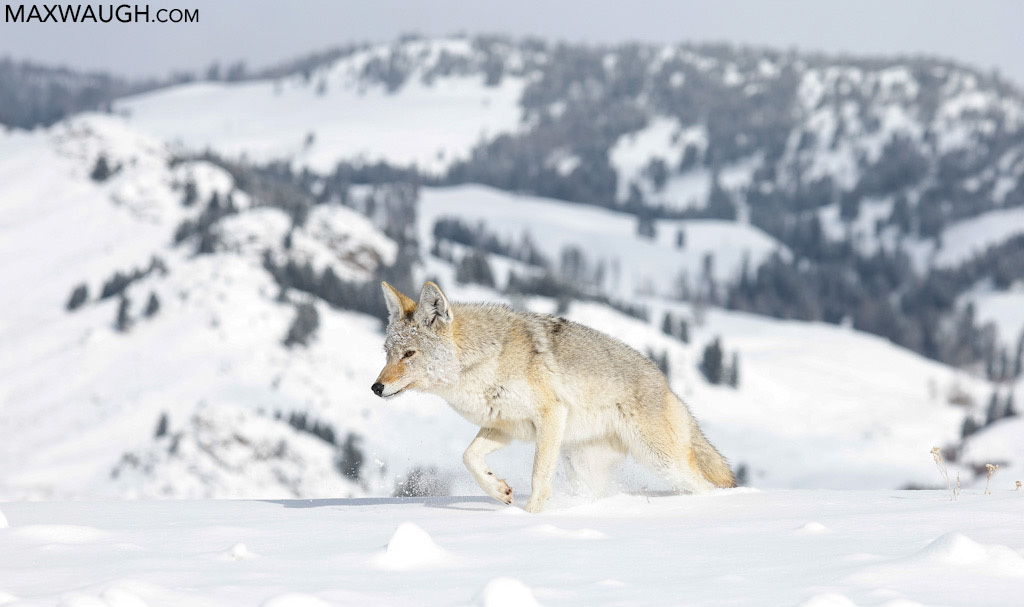 I took care of things in Silver Gate (a Hairy Woodpecker tapped away at a tree above us all through lunch), and then we returned for the final journey through the park. We saw both eastern Lamar foxes on the way back through… the first was napping in the distance, but the second was down by the creek staring intently into the water. Could this be a chance to photograph a fox fishing???

Not this time, as it quickly lost interest and trotted away. Darn. That would’ve been something.

At Lava Creek, a moose was attracting attention. While a few people were standing at roadside and pulled over to take a look, a snowmobiler came rumbling down the road in his truck and sped up as he approached the crowd. He weaved around people, flipping the bird at photographers, before speeding on. Those Cheerios, Man.

We drove to snowy Mammoth for coffees and hot cocoa. I decided to make a quick run up to the Upper Terrace area just in case something popped out. We did have two bull elk grazing in the snowfall in the central village, but that was it. 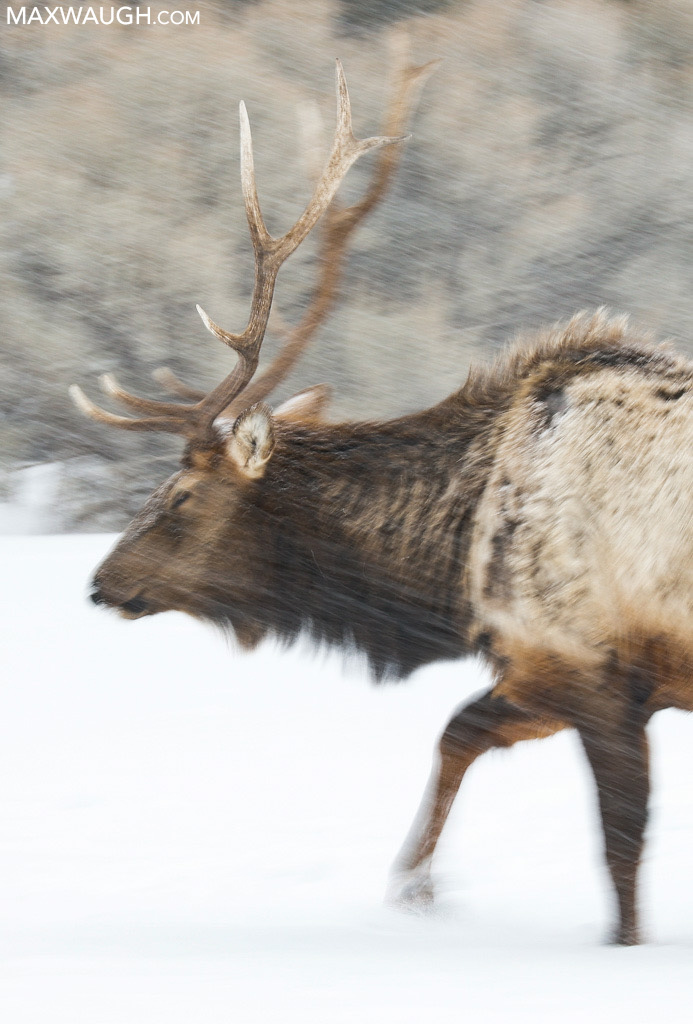 So at least we got to fire off a few more shots to finish up the tour!

That’s it for this one. What a great visit! Big thanks to my clients Richard and Barbara for entrusting me with their first trip in a year, and for bringing all their good luck with them.

If you would like to join me on a future winter tour or another photography adventure, be sure to check the Workshops and Tours page to see what’s on the schedule.