I have completed my Yellowstone Winter 2021 photo collection. It covers my January and February trips to the park, and if you’d really like to spoil any surprises you can jump to the photo archive immediately to get a sneak peek. Otherwise, I plan on previewing more of the new images in the blog next week.

First, I wanted to share one of the highlights of these trips, and one of the more unique interspecies moments I’ve witnessed in Yellowstone over the years. I detailed this incident in my trip reports, but figured this would be a good excuse to share a few more details (and a lot more photos!).

On January 21st, I had returned to Yellowstone’s northern range with my tour group, following three good days in the park interior. We were cruising through the Lamar Valley when we spied a coyote a short ways below the road. It appeared to be digging at or working on a carcass, which in itself is nothing unusual. Coyotes cache meals all the time. However, what caught my attention was the Black-billed Magpie that had joined it. 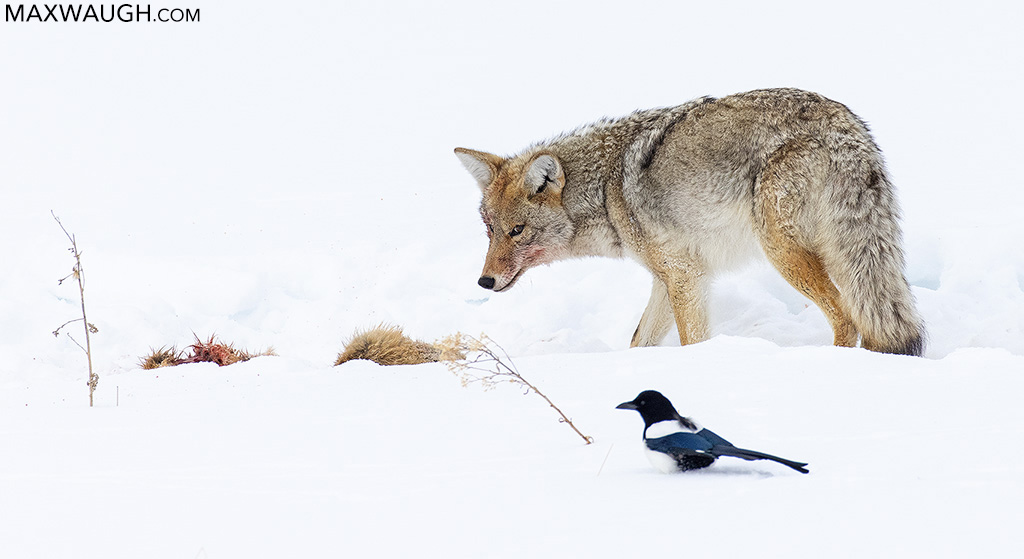 Magpies are handsome birds, but as I’ve detailed in the past I find them to be fairly shy around photographers. This could be an opportunity to not only get closer magpie photos, but more importantly, the bird provided a bold secondary subject to pair with the coyote. It was a good chance to capture a couple of different species together against a fairly clean winter backdrop.

So we pulled over (only after a vehicle miraculously vacated one of the few parking spots at the closest pullout), and walked back up the road. I soon realized we were in for more than just a nice pair of scavengers composed in the same frame. The coyote did not want company. It made multiple attempts to chase the bold magpie away. 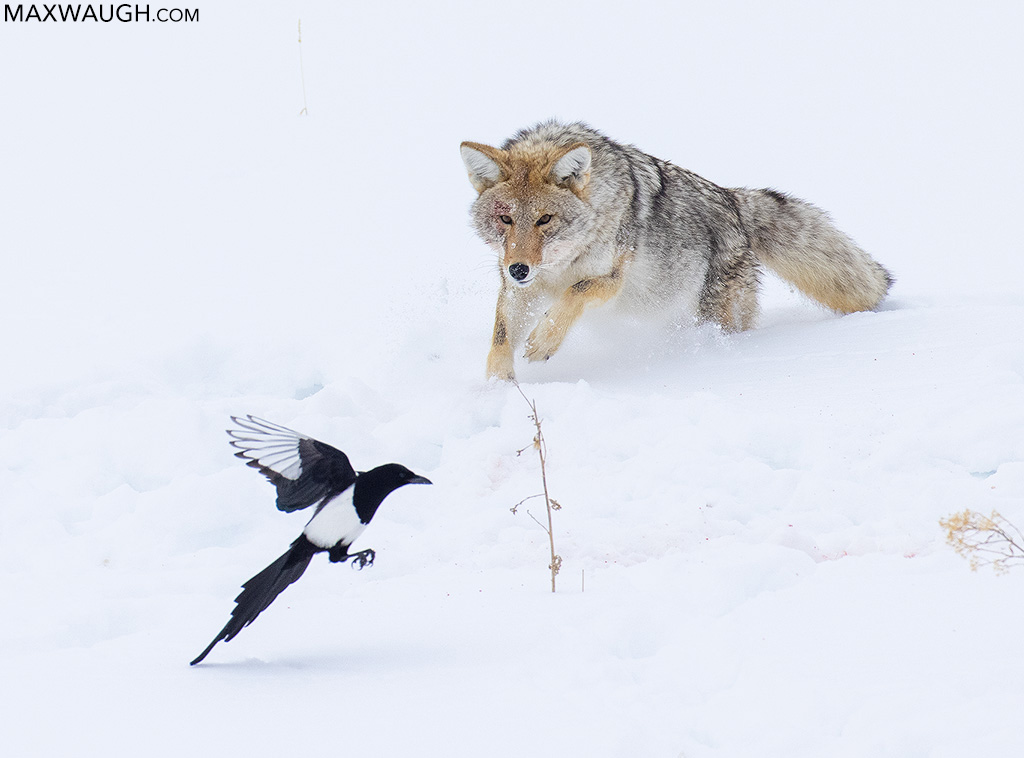 I was really enjoying this cheeky interaction, but as the coyote returned to the carcass and picked and chewed at it, I took note of something a bit odd. The carcass was a unique shade of reddish orange. At first I wasn’t sure if my eyes were playing tricks on me. Perhaps it could be the remains of an elk, the fur of which can posses a rich brown color. There are occasional young bison calves, born out of season, that still sport orange fur in winter. It’s not unheard of for them to succumb to the elements or predation in the harsh conditions.

But this fur had quite a vibrant tone. Which left one possibility: a red fox. That would be something different. Though Yellowstone’s canid species are anything but tolerant of each other—coyotes have to fear wolves, while foxes must be wary of both of their larger cousins—it’s uncommon to witness any sort of interaction and especially predation between the species.

The week prior, we had seen a red fox hanging out in this same area of the valley, so I was pretty sure that’s what we were looking at. My suspicions were soon confirmed. Black ear tips were the main giveaway, and soon the head had been separated from the body and was out in the open for all to see.

The question was: had the coyote scavenged the carcass (perhaps the fox, hanging out so close to the road, had been hit by a car), or had it actually taken down its smaller cousin? Later that evening, someone posted a cell phone video on social media confirming that this had been a hunt and kill right near the road. We probably missed it by no more than a half hour.

The coyote was having issues transporting its meal. First it picked up the body, then put it down and tried the head. Finally, it managed to stuff both in its maw at the same time. It really didn’t want that magpie to sample its prize!

It began to haul the carcass away. 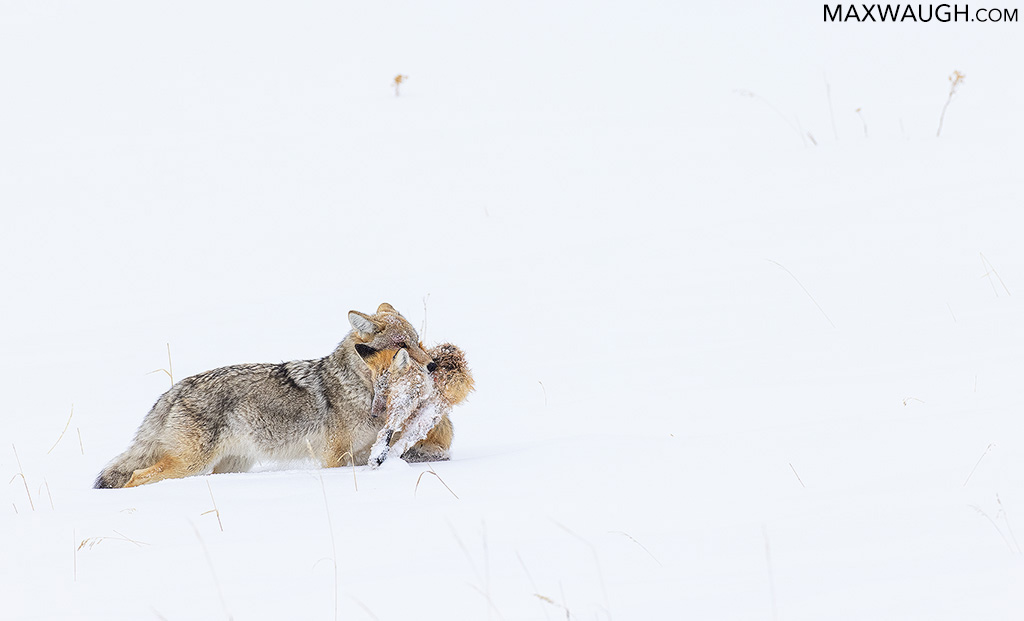 By this point I had managed to flag a few colleagues down to tip them off to the proceedings, so there was a sizable crowd standing along the road watching this rare canid moment. I remained down on the far end of the group, attempting to get a clear view of the coyote, and I really didn’t expect it to move the carcass right at everyone. But that’s exactly what it did. So I mostly had more distant profile views of the transport, while others actually got views of the coyote coming straight toward them. This event was well-documented from many angles! 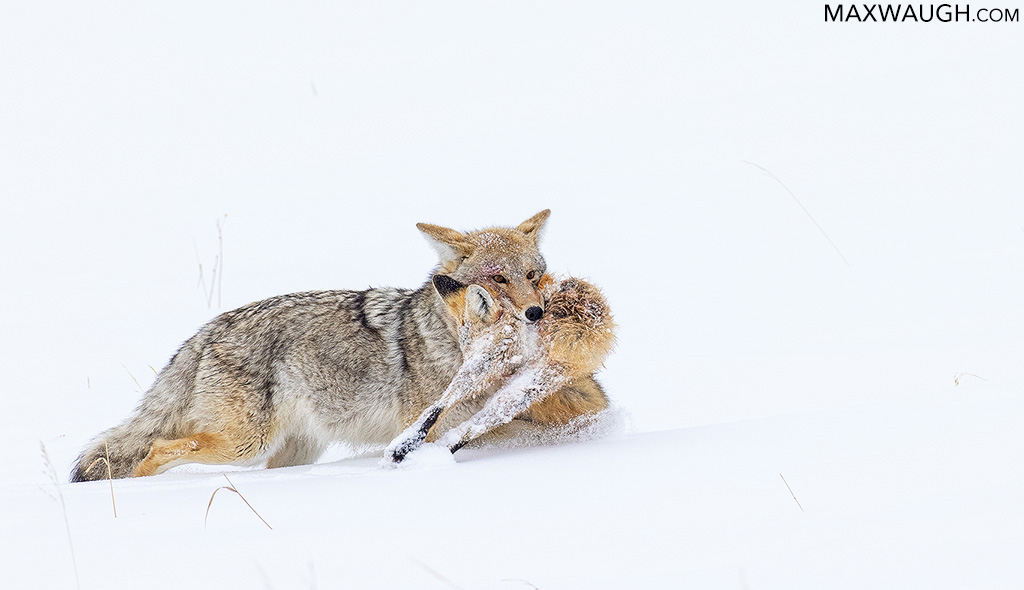 The coyote was looking for a place to cache the carcass, and it didn’t end up going far. Meanwhile, there was continued action back at the kill site. With the big dog away, a Bald Eagle took advantage of the situation and swooped down to steal a scrap of fox. 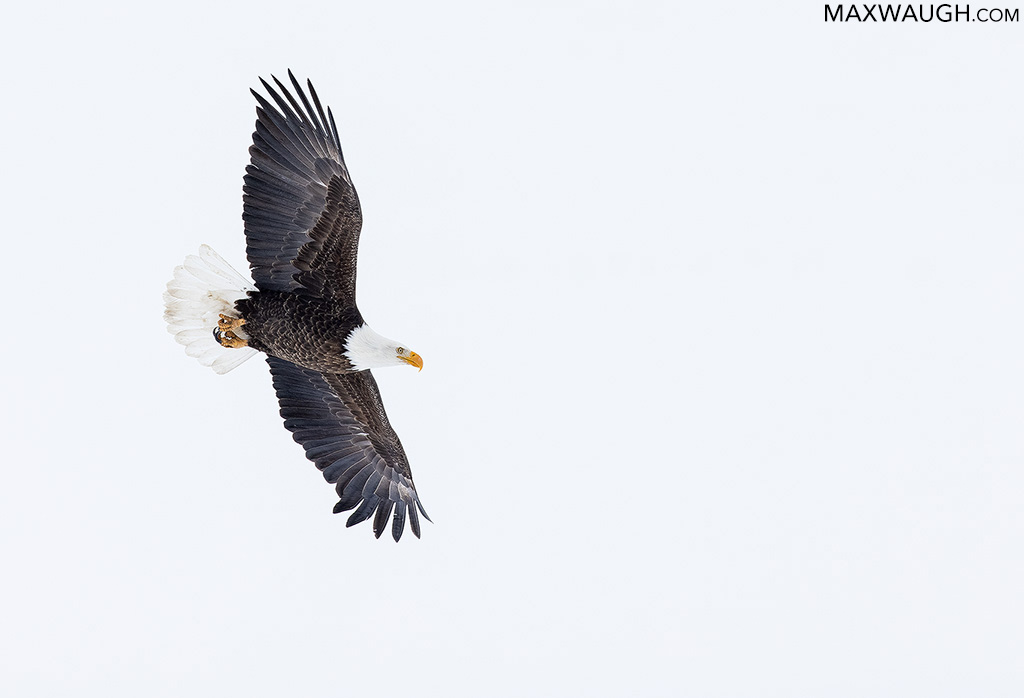 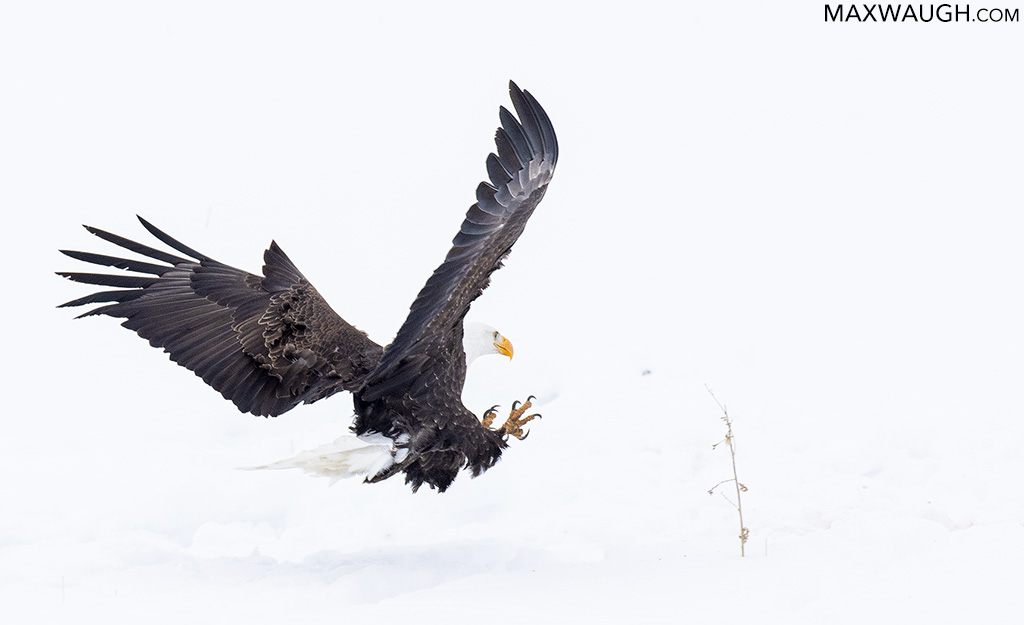 After hiding its cache, the coyote noticed that the annoying magpie was still hanging around, and it had been joined by a couple friends. Which probably meant that there was still food left over. Food which must be guarded! At least, I imagine that’s what the coyote was thinking. So we had a few more opportunities to capture some fun photos of the pursuit. 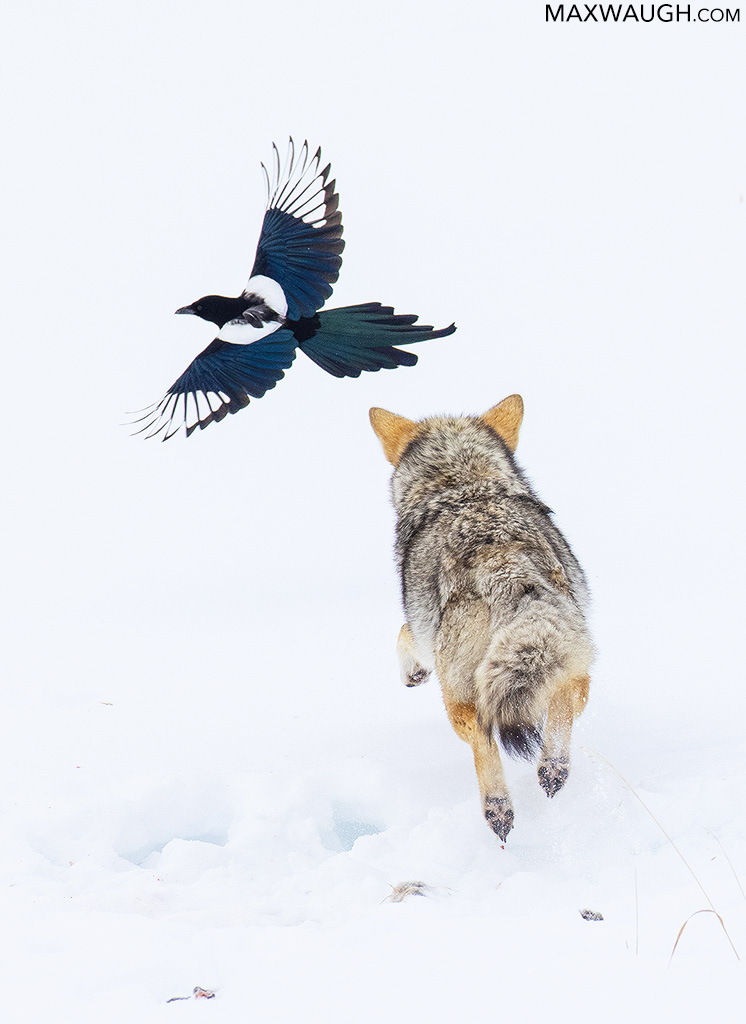 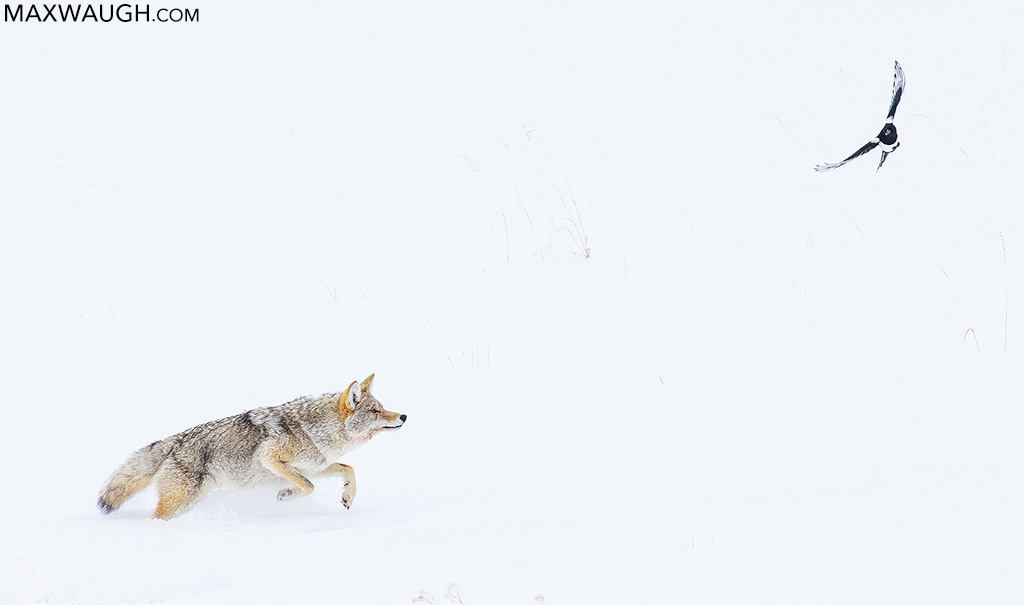 What started with a simple idea of capturing a song dog and a photogenic bird together morphed into a rare and unique interaction involving four different species, including two canid cousins that generally avoid each other. Amazing!

The coyote did leave for a while, but eventually returned after we left. It gave other photographers who had missed the first encounter a chance to capture a few photos, as it dug up the fox head from its cache and moved it to a more secure location. This is one winter moment folks will be talking about for years.

Stay tuned for more photos from my winter 2021 trips, including more coyotes and foxes. Live foxes, even.