Producing Larger Files with the Canon R5 and Gigapixel AI

I was getting ready to share another photo from my recent Yellowstone winter trips. It was one of the images from my best wolf encounter this winter, and I was planning to share some of the technical background behind it. But I kept writing and writing… and soon I realized I may as well turn my ramblings into a short blog post.

I’m not a gearhead and don’t spend a lot of time on the more technical aspects of photography, but lately I’ve been babbling about some photo processing stuff on my social media feeds, and I’m realizing much of my audience doesn’t understand or doesn’t care about that stuff. Many of them are not photographers, after all, and (much like me) their eyes probably start to glaze over if someone spouts a bunch of technical jargon at them. So the blog is probably a safer space for this topic.

I may not have had the awesome wolf luck so many others did this winter, but it was nice to get a couple of decent sessions with wolves at the start of my February trip. This pair of Wapiti Lake Pack members was hanging out together near a bison carcass one afternoon. 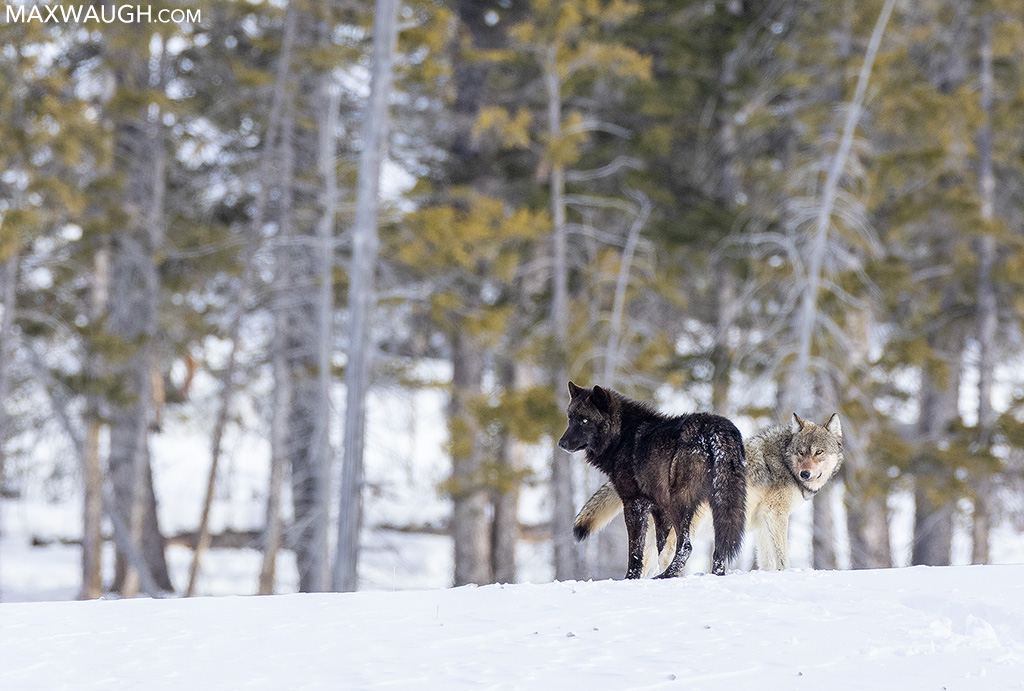 The wolves remained at a medium distance (by park standards) during most of this session… maybe 150-200 yards away. With my older 20 megapixel pro camera bodies, I’d be able to come away with some slightly wider environmental shots, but on this trip I had an added advantage: the Canon R5. This is my first high-megapixel-count body. The R5 clocks in at 45MP. This causes some issues I may address in future articles—additional noise due to all those pixels in a cramped space chief among them—but it does allow for greater leeway when it comes to cropping down while still maintaining some detail.
Which is nice. But even with that, some of the cropped files featuring these wolves weren’t necessarily large enough to create sizable prints. You know, if anyone ever wanted to order one…
Bring in Gigapixel AI from Topaz Labs. I’ve spent a fair bit of time touting the virtues of Topaz’s DeNoise AI software recently in my social media posts. It’s managed to rescue some photos that I had given up on previously. I’ve also used their Sharpen AI program a few times with some success. The third part of the Topaz suite that’s made its way into my repertoire is Gigapixel AI, which allows users to upsize images. A small or heavily-cropped file can be blown up using Topaz’s algorithms to create more usable files… sometimes.
The image above is actually a cropped photo. Here’s the original uncropped version. 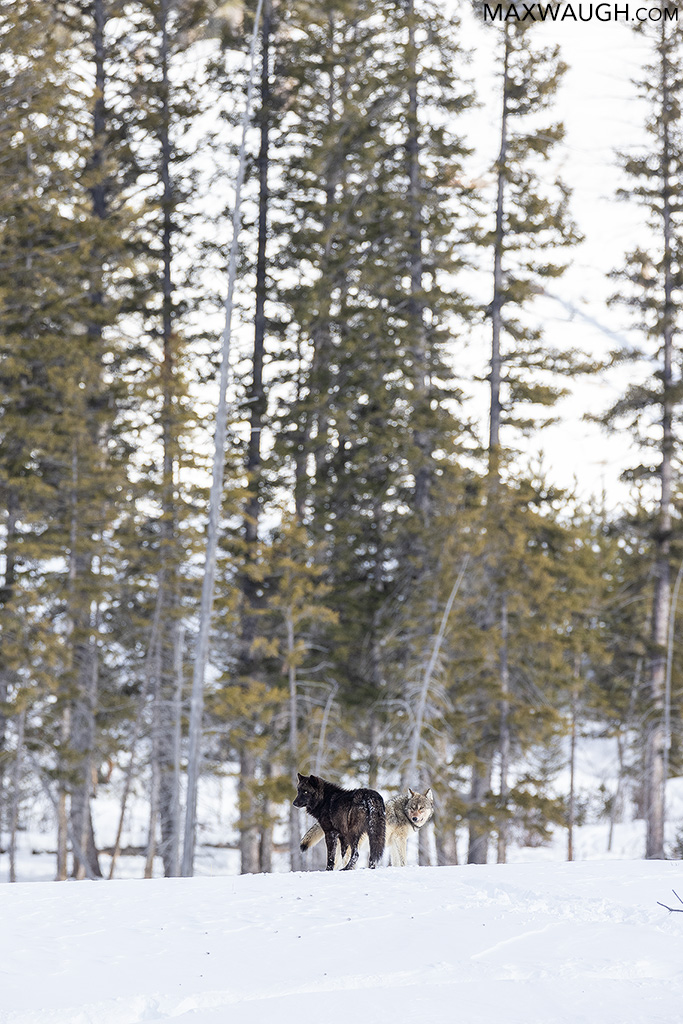 As you can see, I ultimately wasn’t a fan of the vertical composition (in large part due to the scattered trees allowing too much bright background to shine through), so I cropped it a fair amount when converting it to a horizontal layout. After losing so many pixels, I didn’t have much left in terms of a printable file, so I decided to try increasing its size.

The problem with upsizing any image file is that your software has to guess at how to “fill the gaps,” and approximate what will fill all the extra pixels it’s creating. Topaz’s AI does this pretty effectively, but it’s far from perfect. Until now, upsized files often ran into the same pixelation issues one might find in upsized Photoshop files. Here’s one example (note that “2x” refers to doubling the exterior dimensions, which effectively quadruples the available pixels).

It’s important to note that the Topaz edit here was done using Gigapixel’s “Standard” setting, which has preset levels for noise reduction (“Suppress Noise”) and a form of sharpening (“Remove Blur”). If I wanted to, I could increase or reduce those levels, to try and get rid of that noise for example, but I found that even a significant bump in noise suppression produced only patchy results that looked mediocre at best with this image. This type of inconsistency is something that’s occasionally seen in Topaz DeNoise, so it’s not surprising that it’s found in a program that is not specifically made for noise reduction.

Topaz is notorious for updating their software constantly. In my first year owning the Topaz suite, I seemed to be downloading new versions weekly. That actually got kind of annoying, so after my year’s worth of free updates ran out, I didn’t renew and just stuck with what I had. But the software I had was still producing mixed results at times, so I fell back on the hope that it would continue to improve with future versions. I somewhat reluctantly paid the fee to continue receiving software updates… and it’s a good thing I did.

In this case, when I saw I had some heavily cropped files off the R5 that were at least good enough for the web, I began to wonder how they’d look for print with just a little upsizing. So I opened up my refreshed version of Gigapixel AI. There were some new AI modes available. Among them, “Compressed.” I quickly clicked on this to see the preview and… whoa.

This was a much cleaner image. It obviously had some noise reduction built into its default treatment, but the finer details in the preview seemed to hold up quite well too.

About the Compressed Mode, Topaz writes on their website, “we have trained it to remove compression artifacts and overall improve old and/or low quality images.” What I was seeing was an image quadrupled in area that preserved important details while cleaning up a lot of the messy background. I actually prefer not to get too heavy-handed with DeNoise when I do use it for noise reduction (so many photos out there these days look “too clean,” pillowy soft, and glossy), and the nice thing is that Gigapixel allows one to reduce the “Suppress Noise” function as desired before saving out the final file. So I can cut back on the noise reduction if I feel it’s too heavy-handed.

It was right around the time that I made this discovery that a friend mentioned that Adobe recently introduced a feature that competes with Gigapixel AI called “RAW Enhance Super Resolution.” To test and compare this new toy, I used another of the wolf photos from this shoot. Here’s the full frame image: 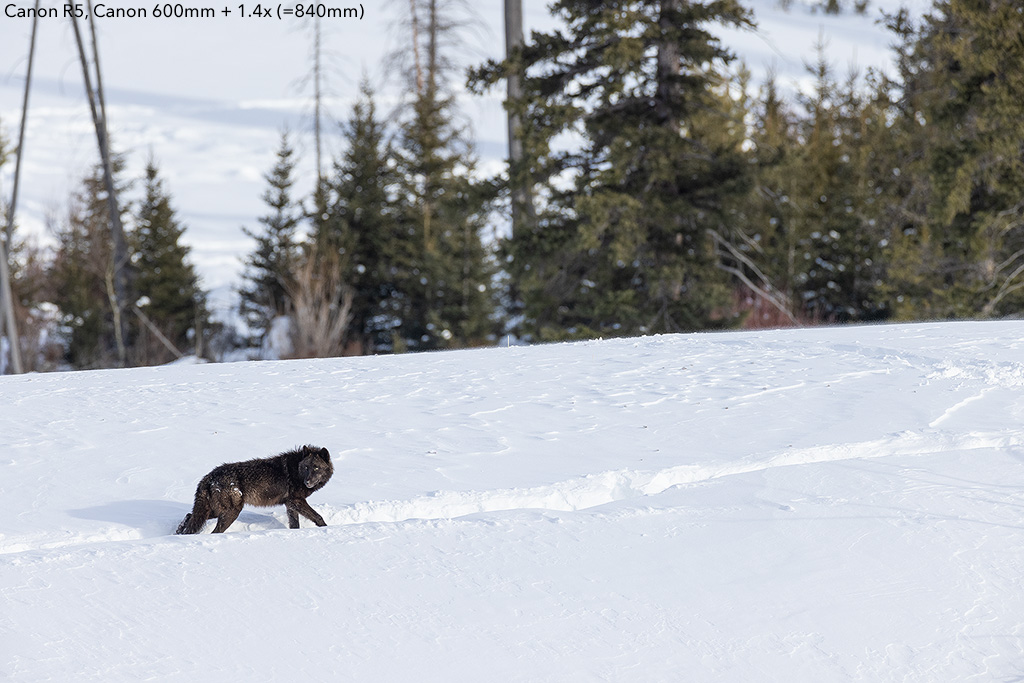 As you can see, even with 840mm, I was still quite distant, so I was composing for the wolf to move along this path. Once it looked back, of course, my lower left orientation didn’t quite work as well. So how could I crop to make this image more effective… and would I even have enough pixels to do so?

The original image boasted 8192 pixels on the long side, and zooming in, the wolf itself looked quite sharp. But after cropping close, I was left with about 3000 pixels on the long side at 300dpi. That’s a ten inch print right out of the camera. Not bad given how much I was chopping off (90% of the pixels were gone!), but could I create a printable image by upsizing? And would Adobe’s “Super Resolution” match Gigapixel AI’s performance?

I tried Adobe’s upsizer first. Instead of having the image open in Photoshop and just increasing the image size (as I did in the previous example), I had to open up the original file in Camera RAW. I then right-clicked the preview thumbnail, selected “Enhance” and then “Super Resolution” (you can also select from the three-dot menu item on the far right of the Camera RAW window). Voila! RAW took about ten seconds to create a new file, twice as wide as the already impressive 8000px wide file I had on hand. It actually saves a new DNG file on your computer as it does this. I opened that in Photoshop and then cropped down.

The results were impressive. Really nice detail in the black wolf’s face and body, even before sharpening. And overall, pretty similar to what Gigapixel already proved it could do. I had to compare side by side to look for subtle differences.

And the differences are subtle, yet noticeable. Check out the snow in the shadows beneath the wolf. Gigapixel did a much nice job cleaning that area up. At the same time, I found that it rendered some of the finer details in the wolf’s fur better. The face is slightly sharper, and the tiny flecks of snow had better definition.

It’s nice to see that Adobe has introduced more powerful upsizing tools to its lineup, something that will certainly help those that don’t own or plan to own the Topaz suite. But at the moment, Topaz seems to be ahead in this particular aspect of the photo rendering process. Obviously, I’ve only used a few examples, so take this assessment with a grain of salt. A proper test would analyze and compare using different styles of photos, varied settings, and different lighting situations (a hard core reviewer would even use different types of cameras). This is just what happened when I tried out some of the images from this particular trip.

Honestly, it amazed me that I could produce something big-print-worthy with only ten percent of the original frame. It’s a testament to the power of high resolution sensors (something all major camera brand owners can enjoy these days), and the magic of the ever-evolving Topaz suite. I’m looking forward to seeing what sort of magic the Gigapixel Compressed function can perform on more of my older files!

Interested in ordering Topaz Gigapixel AI, or better yet, the entire Topaz Suite? Use this link! Purchases via this link do help my business.

View the full Yellowstone Winter 2021 gallery in the archive.