The morning I began writing this, I awoke early. Not Explore the Park Early, but I wasn’t intending on going anywhere and sleeping in would have been preferable. We were out at the cabin, and the rest of my family was blessed to remain in dreamland.

A subtle glow lit up the blinds as I tip-toed downstairs. I flipped on the kitchen light.

I raised the blinds in front of the dining table.

Then I sat down and quietly got to work. Despite being out at our Silver Gate property a week-and-a-half already, I still had a load of photo prints that needed to be matted and prepped for sale at the nearby Stop the Car Trading Post. I had some catching up to do.

The cabin remained still, aside from the tired photographer hunched over, cutting hanging tape—Snip—lining up prints with mats, and pressing everything down (Ffffft). Occasionally, I’d look up and out the window. Scan the creek. Glance at the willows.

I’d stare at the opposing mountainside, towering over everything. The gray remnants of the 1988 fires dominate the slope, interspersed with young green pines here and there. The splotchy regrowth here is a far cry from the thick needly walls flanking the road to Norris Geyser Basin.

My eyes floated higher, to the snow-patched upper slopes and the peak. We’ve had a place here for more than a decade and I still don’t know this mountain’s name. Or if it has one.

No wildlife at the moment. Sometimes we look out and catch a moose in the willows. Bison or deer may stalk by the window. More often we catch the quick flash of a red squirrel (while hoping it is a rare marten). Harlequin Ducks floated past while I was working on matting a few days earlier. And I think the only reason I always check the top of the mountain when I look out the window is in hopes of catching a wolverine ambling across. Could happen.

This is Silver Gate, sandwiched between Yellowstone’s northeast entrance a mile away and the bustling outpost of Cooke City—home to fewer than 100 permanent residents, yet still 7-8 times more people and noise than Silver Gate—three miles in the opposite direction. Whenever I step outside the cabin early in a trip, I wheeze in the fresh mountain air (elevation 7388 feet), and adjust to the quiet. Soda Butte Creek burbles nearby. The occasional bird song filters through. A neighbor’s dog sometimes barks half a kilometer away. Otherwise, little penetrates this pocket of wilderness. Winter brings an extra layer of insulation, and things become even more muffled. 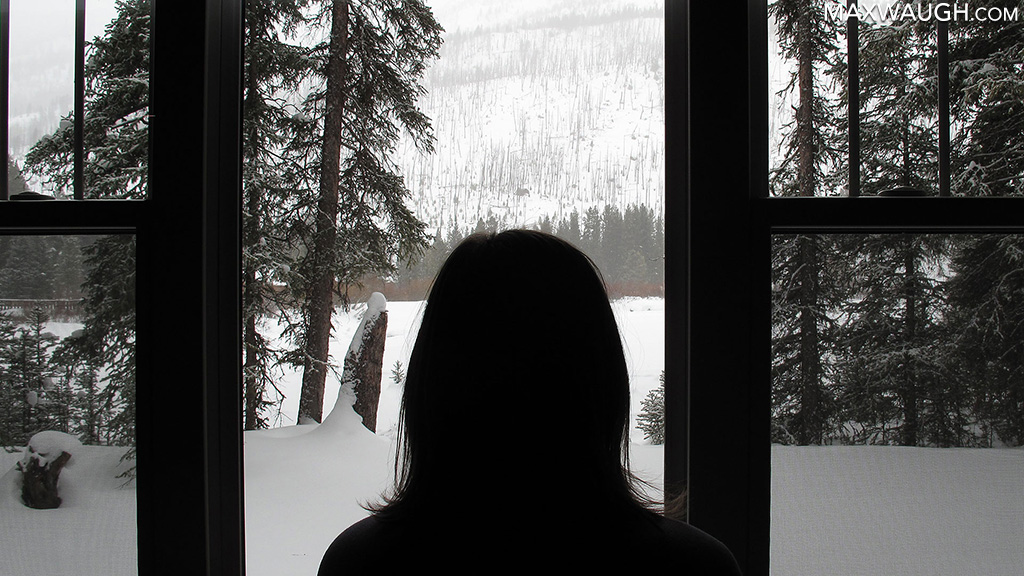 At the cabin, I spend half my time indoors peeking outdoors. During a recent online parent meeting, I kept looking over my shoulder in case a moose decided to stroll by the window and join in on the Zoom call.

Any time I go outside, I feel like I’ve been deposited in a quiet little vale straight out of fantasy. As though, back in 1932, some mustachioed gentleman flew overhead in his biplane/hot air balloon/dirigible and spied this valley. He then held out his hand and sprinkled some magic seeds that sprouted into rustic, charming buildings and peaceful days. 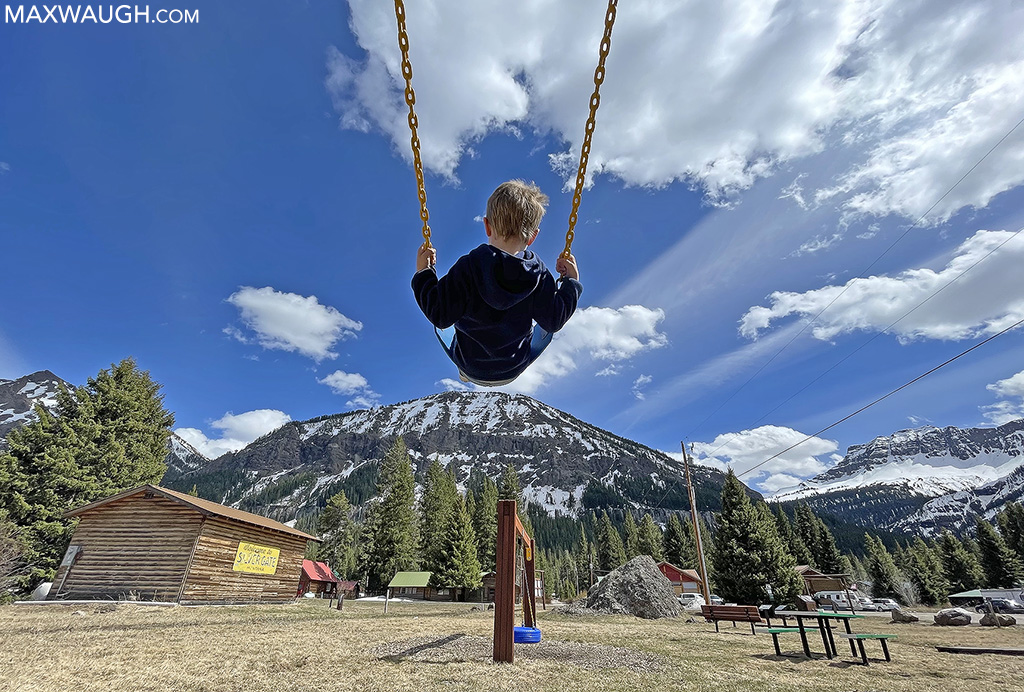 One of the better views from a swingset.

As I walk with my son to the quaint playground in the middle of town, the imposing wall of Amphitheater Mountain comes into view, keeping the outside world at bay. Whenever I drive into the park first thing in the morning, the far end of Barronette Peak quickly appears above the trees, etched in monochrome against the deep blue-gray sky.

I used to feel far differently about the northeast corner of Yellowstone. It was… boring. So many trees meant there was nothing to see! It was one of my least favorite drives in the park. Old Faithful to West Thumb and Norris to Canyon were the others, and they seemed to share something in common: Few open spaces. No sight lines. No wildlife sightings. 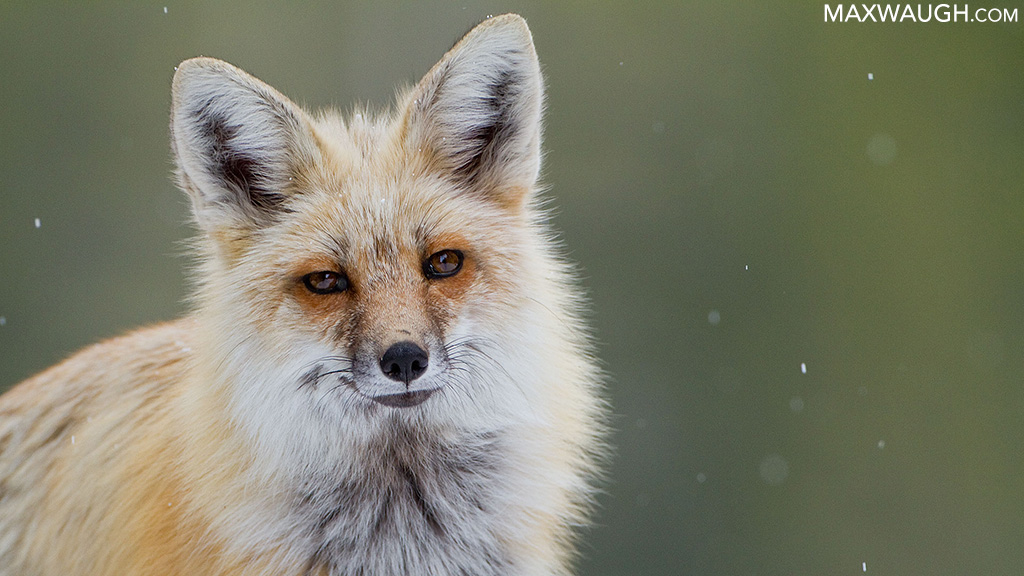 Sometimes we catch the neighbors as they come to visit. Mostly, they slip away unnoticed. It’s easy to blend in around here.

To this day, I see cars reach the northeast gate after driving from the Lamar Valley. They quickly turn around, fleeing back toward the open spaces and easier viewing in the park. I chuckle, because they’re missing out on more potential gems beyond the gate… but I also sympathize. That used to be me. 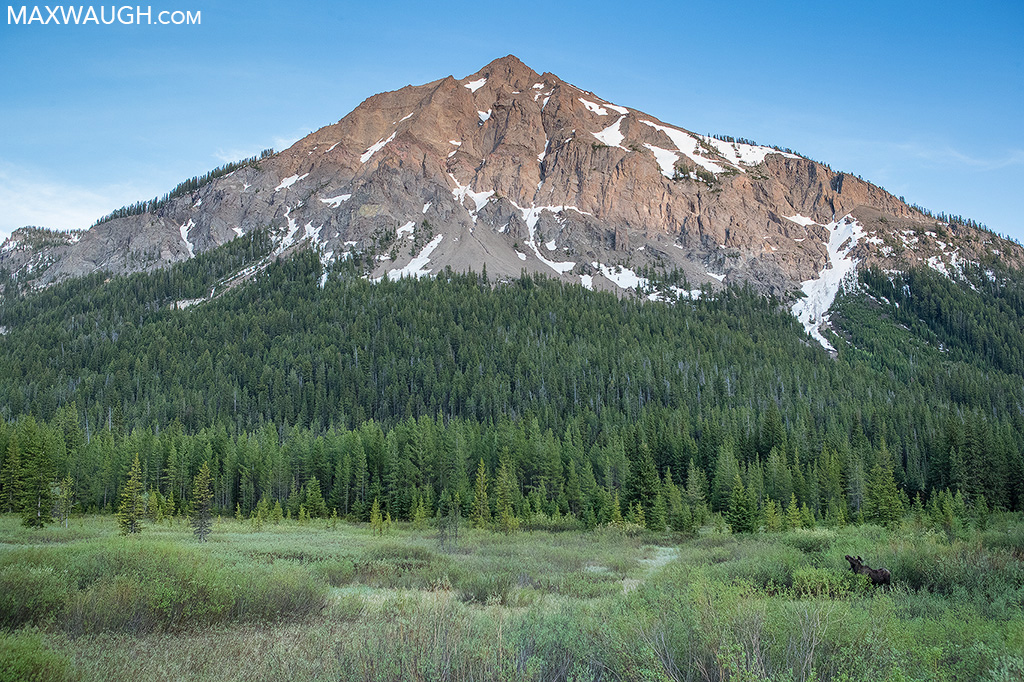 Visitors who turn around at the northeast gate risk missing out on more wildlife and some spectacular scenery. This bull moose was grazing in front of Mt. Republic between Silver Gate and Cooke City.

Ironically, when the idea of purchasing land closer to the park began percolating, this area was the clear top choice. It had trees. Few open spaces. Not always best for exploration, but ideal for more languid moments. Yellowstone’s northeast, embedded in undulating greenery and shadowed by mountains on all sides, felt much more like home (to a native Pacific Northwesterner) than the brown sage-covered hills beyond the Roosevelt Arch, or the flatter, homogeneous forests outside the west gate.

Imagine how one’s perspective changes after spending more time in a place, being forced to find the slight openings in the walls of trees, glimpse brief movements on the edges of meadows, and slam on the brakes when a weasel, fox, or moose suddenly darts out into the road. 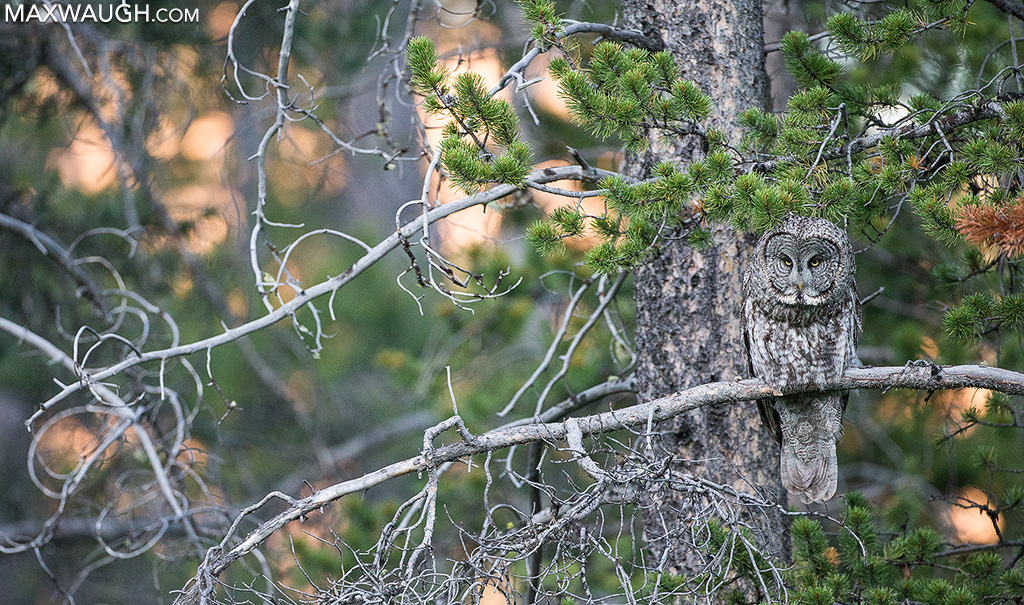 Sometimes you have to look hard to find the northeast corner’s bountiful wildlife.

Subsequent years of driving this stretch of road in spring, fall, and winter have taught me that it’s still not easy to find animals here, but often when I do, the encounters can be more special. Great Gray Owls, wolves… I even saw a bobcat in the morning darkness as I left to drive back to Washington one spring. If anything, being tucked away up here means you’re more likely to get a private show when you see an animal, compared to the louder group experience that becomes more and more common as one penetrates the park. 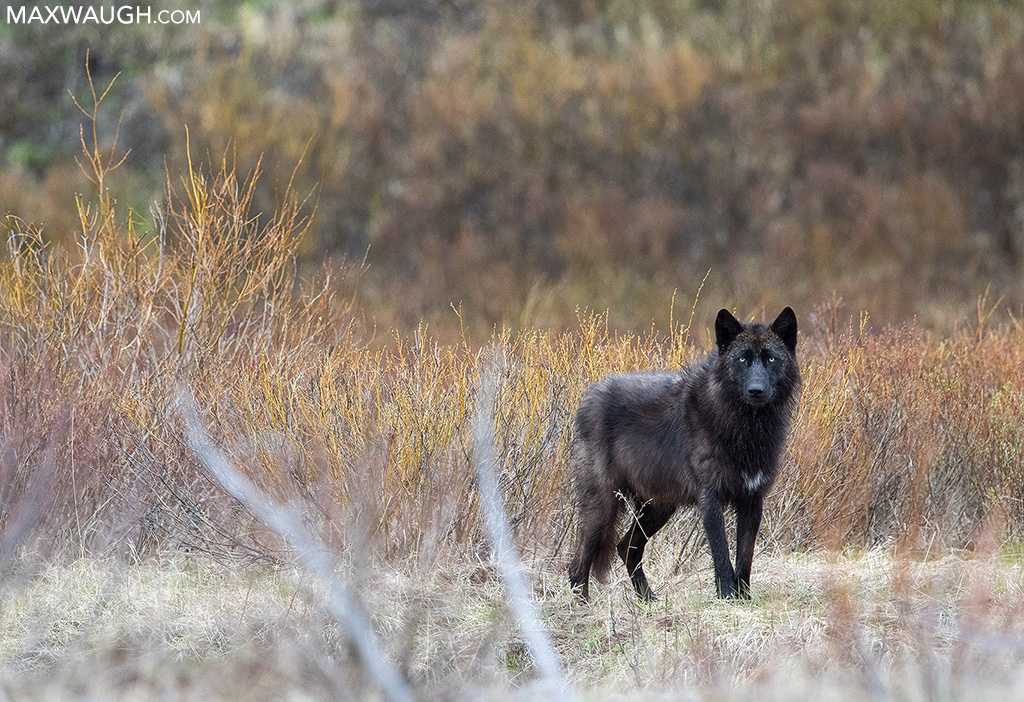 A lone wolf, photographed on my own, in Yellowstone’s northeast corner.

Quiet, slow mornings are common and inevitable when I enter the park. But I feel differently about that quiet now: the emptiness that used to bother me during hurried Yellowstone visits is almost a comfort during my morning commute these days. Some mornings I’ll drive well into the Lamar Valley before seeing another soul, human or animal. And in these instances it simply feels like the peace and solitude of Silver Gate has extended its reach a few extra miles beyond the park boundary. It follows me.

As I came back to this piece and continued writing a few days later, I looked up and found a moose in front of the window. She went to munch on willows. The calf was off somewhere to the right in the trees. 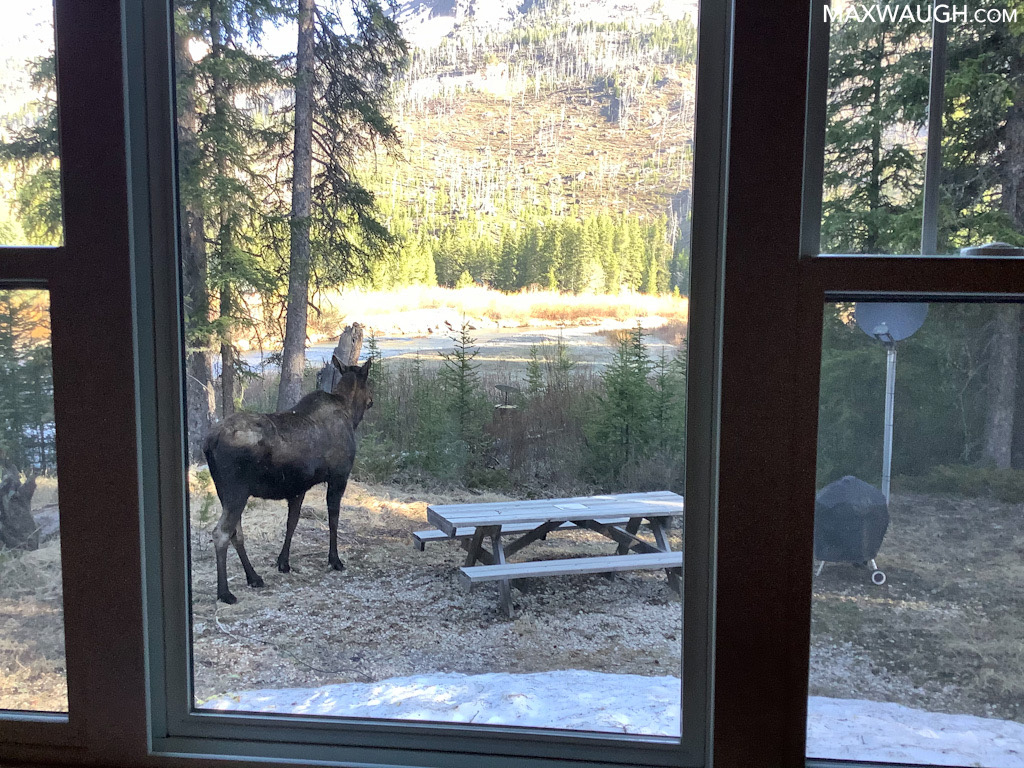 A cow moose walks into view on our property. Photographed from the dining room window with an iPad.

Robins chased each other and gathering nesting materials for their expanding families. My own family was still asleep (at 8:30… how do they do it?!). A bison lumbered by the same window a couple hours later.

It was the final morning of our stay. No plans. Just the view out the window, maybe one last walk by the creek (once the moose and bison had left), and perhaps one final jaunt at the playground. Okay, and some Stop the Car ice cream.

Some day perhaps, we’ll be planning these visits across months rather than mere days and weeks, and these comforts may begin to feel more like a part of everyday life. Maybe the calm of Silver Gate will eventually follow me all the way home to the city. But for now, it will all remain unique enough to alert my senses and heighten my awareness during my visits, constantly reminding me how lucky I am to start and end each day in the twelve miles of wilderness between here and the Lamar Valley.