This was likely our final super-early morning of the trip, with one final jaunt planned for Hayden Valley. This time, we did have more fog on the valley floor, but it was either too thick initially, or burned off so quickly, that we couldn’t do much with it photographically. Some bison even grazed and wandered near the road, so it was too bad we couldn’t combine them in a better way with the semi-opaque conditions.

At one point four bulls took off in a run, and played and danced down in a creek bed for a few moments before disappearing into the sage. Hopefully the clients managed to snap a few quick photos after I pulled over at the tail end of the action.

Unfortunately, the rest of our time on the east side remained fairly quiet. We checked all the usual spots for wolves (seen in the distance), bears (not seen), and owls (ha!), but nothing gave us reason to pause.

On days like today, it’s good to have a backup plan, and thankfully we timed it right to head over to Yellowstone Falls to shoot the 9:30 rainbow. It was slow getting started, and I worried that this too might prove underwhelming, but eventually the colors kicked into higher gear. 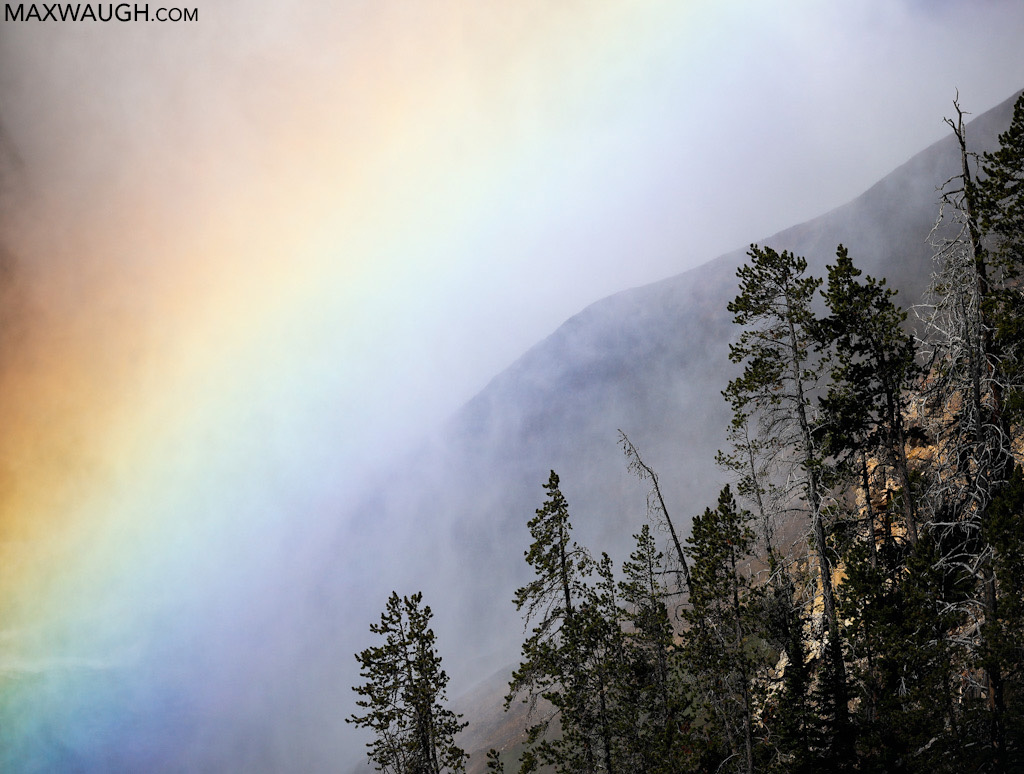 As with our previous Hayden/Lake day, we returned to the north for a midday break. Before doing so, I wanted to squeeze in a quick drive along the Old Yellowstone Trail. I wasn’t expecting photo ops at midday, but thought we might at least see if any animals were hanging out there (including elk with calves, something of which we’ve seen few times in the Mammoth area).

There were a couple pleasant surprises. A pronghorn and fawn walked up a hill above the road, and a Western Meadowlark perched as close range while clamping down on a couple of wriggling caterpillars in its beak (all while managed to emit the occasional peep out of the side of its mouth). 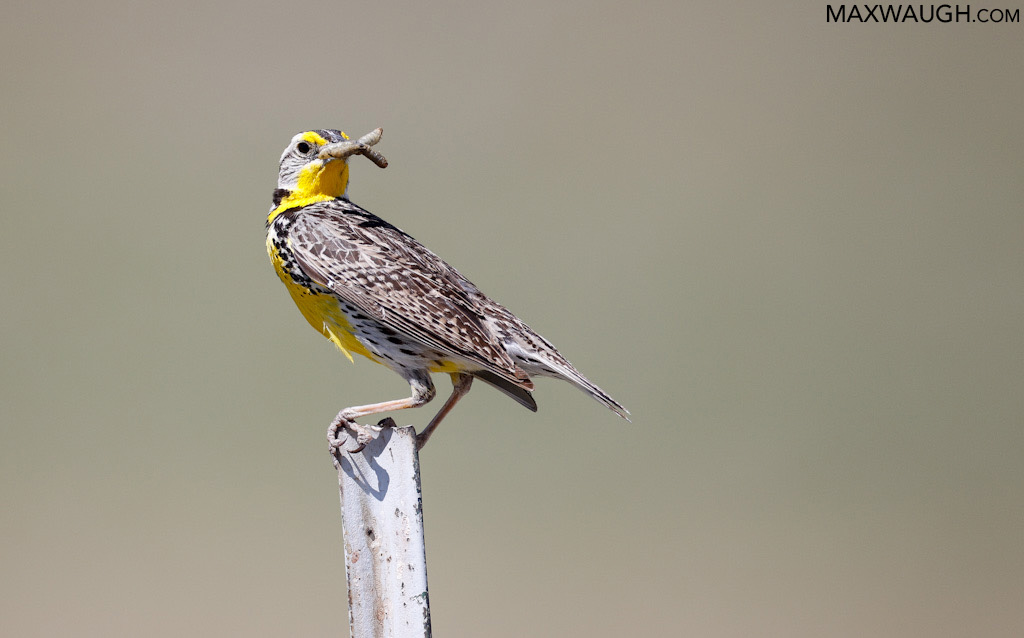 Following our break (including the obligatory, much-needed nap), we were back in the park for our afternoon excursion. In the harsh light at Phantom Lake, a black bear and cub explored the meadow. We managed to pull off the road and join the small ranger-managed group. 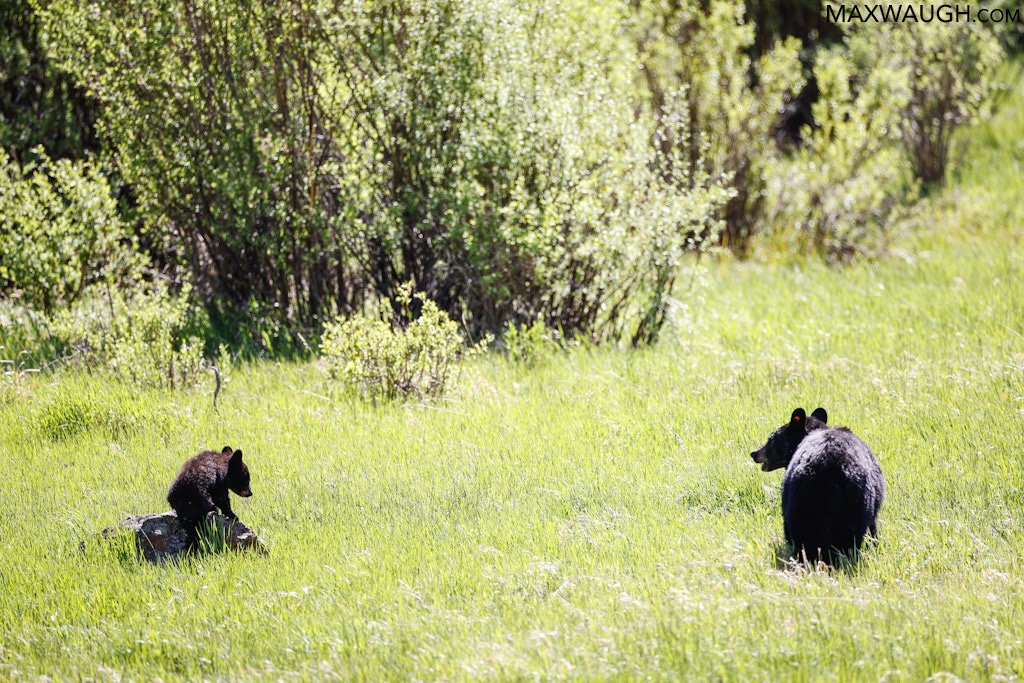 Just up the hill, another young bear grazed at the edge of the road. Near Floating Island Lake, a coyote was intent on ground squirrel dens, but came away empty. 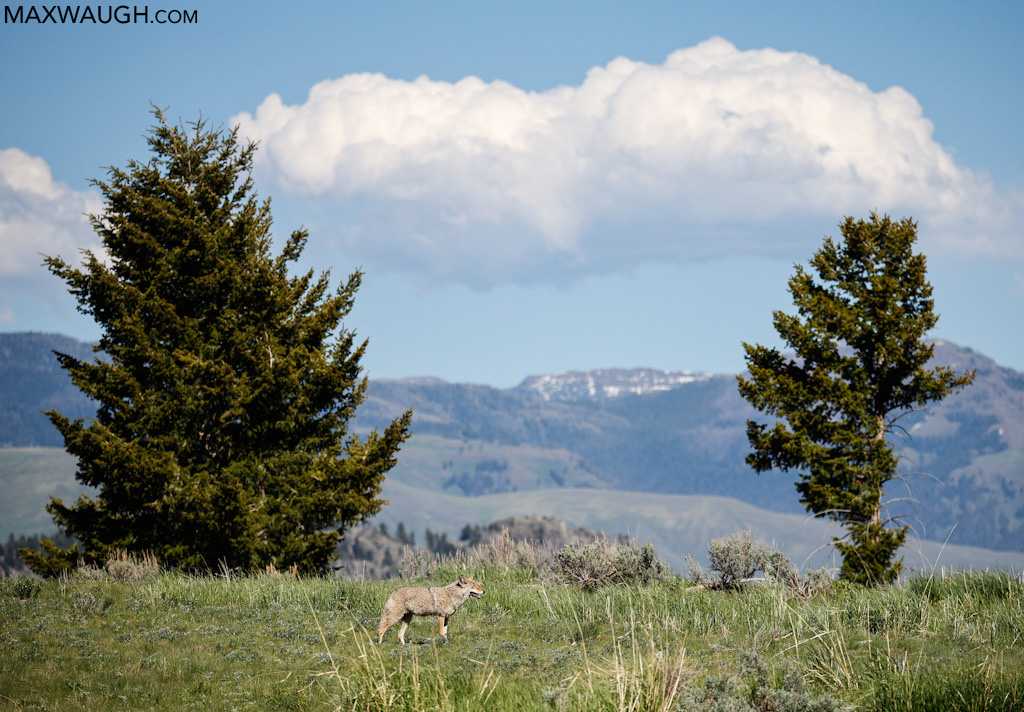 Down the hill, a healthy cinnamon black bear wandered in the distance.

We ended up driving all the way to the northeast corner for a moose/fox check, and then decided to just keep going. There are such animals outside the park border, after all. It was looking like we were going to strike out, however, as we turned back a few miles outside of Cooke City… but on the way back a gorgeous light colored fox disappeared from the road as we approached.

It seemed a bit skittish (perhaps the same, nervous light colored fox I saw in the area this same time last year), but calmed down once it reached the meadow. Until, that is, a large truck approached, and it sprinted away.

Just inside the northeast gate, a bull moose wandered away and out of sight, and then a couple miles in another fox was hunting in a meadow. This was different from Tuesday evening’s fox… it’s been a good trip for them.

On the way back through, a black bear approached a pond in Little America. “Go for a swim!” I suggested. It did.

At Elk Creek, Tuesday’s black sow and two tiny cubs headed toward the ravine far below. The cubs climbed a tree just as we passed. Where was that the previous day???

On Blacktail Plateau, another pronghorn and fawn stood in the sage above the road. We kept going, thankful we had our own great encounter with a pronghorn family the day before.

For the final day of our tour—and perhaps my last Yellowstone day of the year—we opted for the traditional northeast trek. We hoped for more bear cub encounters, additional badger time, and perhaps a lucky, close wolf encounter.

We saw the bears right off the bat. At Phantom Lake, the black sow with cub were in the flats, but it was dark and they were a fair distance away, so we didn’t stay long. Much of the remaining drive to the Lamar was uneventful.

On our second pass through the valley, a call on the radio beckoned us back to the west, where “an animal” had been seen. Sure enough, a black-animal-that-looks-somewhat-doglike-and-far-enough-to-look-dotlike-and-which-often-totes-a-giant-cube-around-its-neck-and-is-stalked-at-a-distance-by-people-with-scopes was working its way up the hill on the other side of the river.

We resumed the drive east. At Hitching Post, the swallows aren’t nesting under the eaves of the bathrooms for some reason, but this time several seemed curious, at least, about their former home. 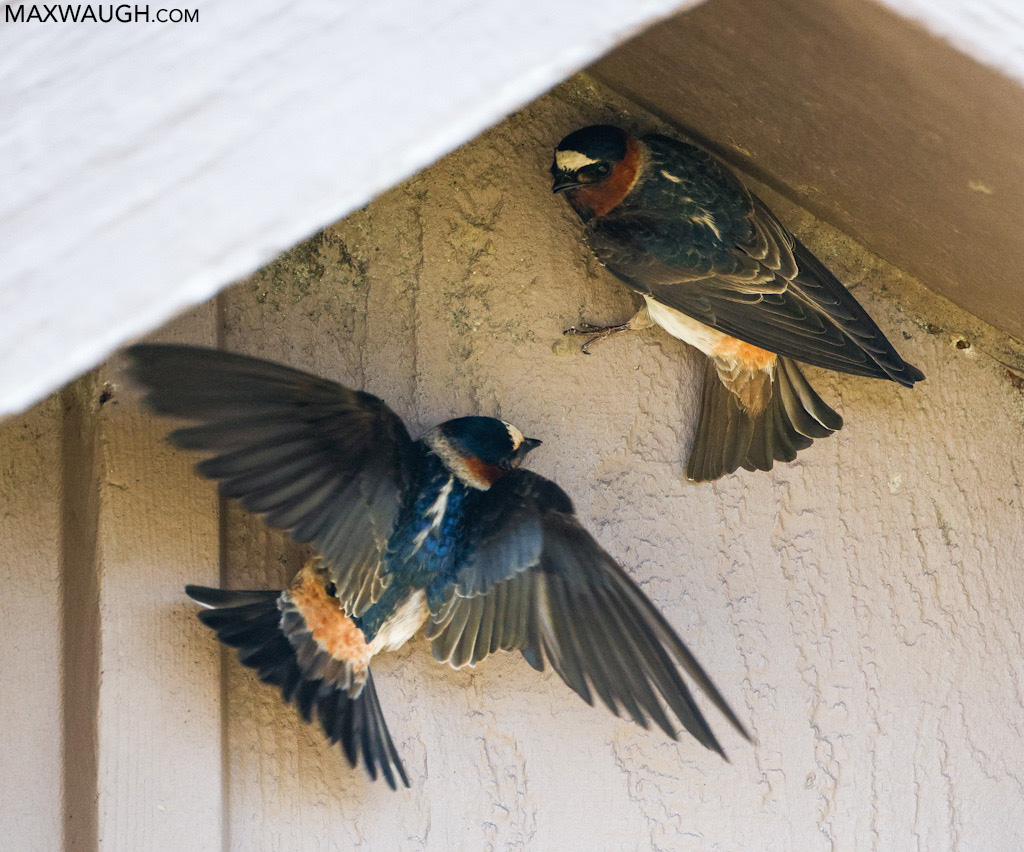 There were a number of cars parked in the lot, yet no people were present. Odd, I thought. Are they in the backcountry? That would be a massive operation for so many people.

Then one lone man stumbled out of the hills, like a survivor of a desert plane crash in the early twentieth century. He reported that wolves were around the corner, investigating bison. Hopefully it wasn’t a mirage.

By the time my clients had walked out, they were only able to catch the last of six wolves heading up a far hillside. The dots were getting bigger. Our only bad luck, really, was that none of the crowd had a radio, or we would have been there soon. Instead, it was a big caravan of teenagers and their chaperones, lucking into their own private wolf sighting. The way things go in Yellowstone sometimes, and the way they should be.

It was time to stake out the badger den. We stood chatting at the site for a while, until I began to notice an uptick in the amount of squirrel chirps. Not full blown alarm calls, but they were getting louder. I went uphill to investigate.

That’s when the badger appeared to the west, crossing the road and bringing a meal to her kits. They didn’t emerge.

She was soon back across the road, however, so we all moved up to get a better view… but the badger was gone. Somehow she’s managed to slip under the sage (or into a hole) without clueing us into her location. The ground squirrels were going nuts, but we still couldn’t pinpoint her.

It wasn’t until a half hour later that I spotted her way up the hill, digging a hole. We went up to get closer to eye level, setting up about 70 yards away as she traveled between two holes she had dug. Occasionally, she’d bring out a dead ground squirrel (I suspected they were teenagers). 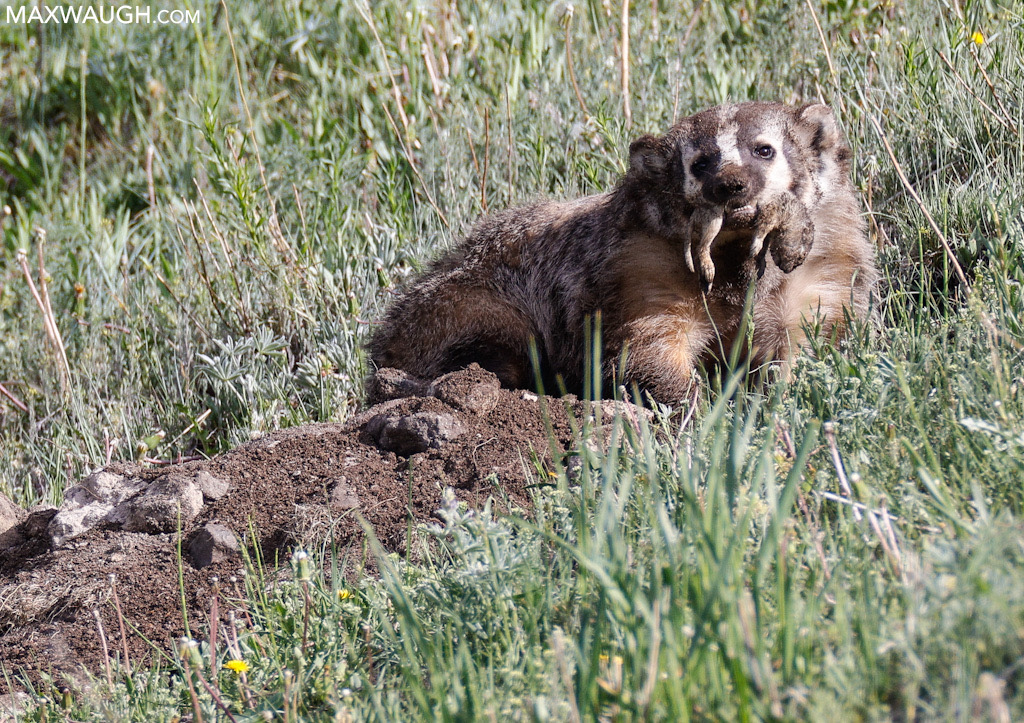 The badger would go between holes, often carrying a squirrel with her. I suspected she was holding onto one prize while digging for another.

A line of big bison bulls marched down the hill at one point, forcing us to back up and out of the way until they descended to the valley floor. Then we were resumed our position. 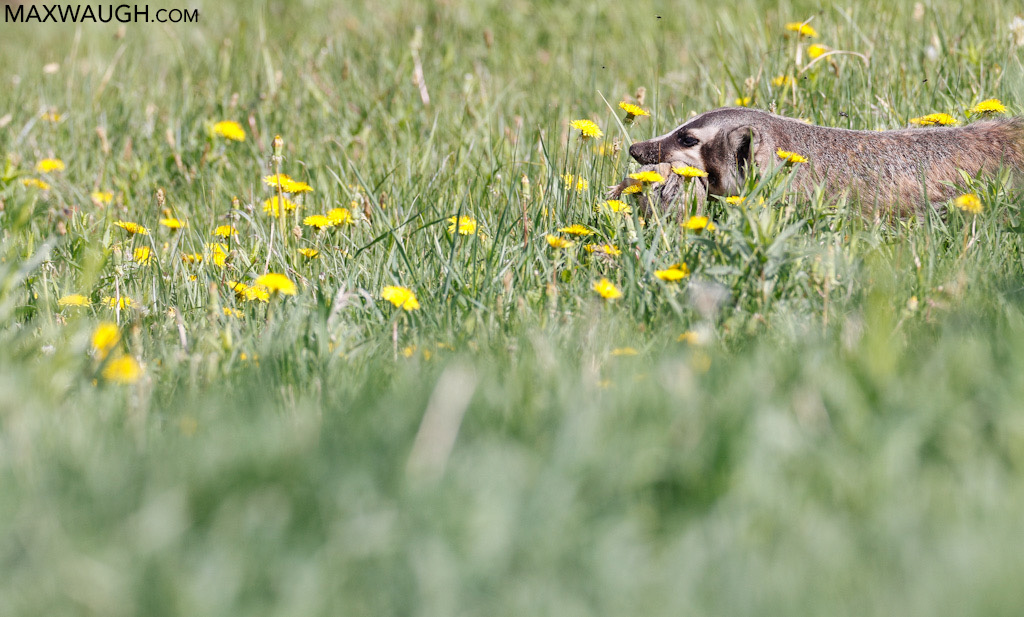 We never did see the kits. They failed to emerge even when the treats were brought in. Satisfied, we packed up and drove to Silver Gate. Time for lunch, unloading some supplies, and, er… treats at Stop the Car.

An odd thing was happening on Thursday. Orange-vested park personnel were everywhere. Construction, road work, scientific surveys… Even in Silver Gate a road crew was hard at work. Maybe the funding finally came in.

I suspected the funnest of these gigs had to be the amphibian survey being conducted in the northern ponds. They were looking for frogs, toads, and salamanders. 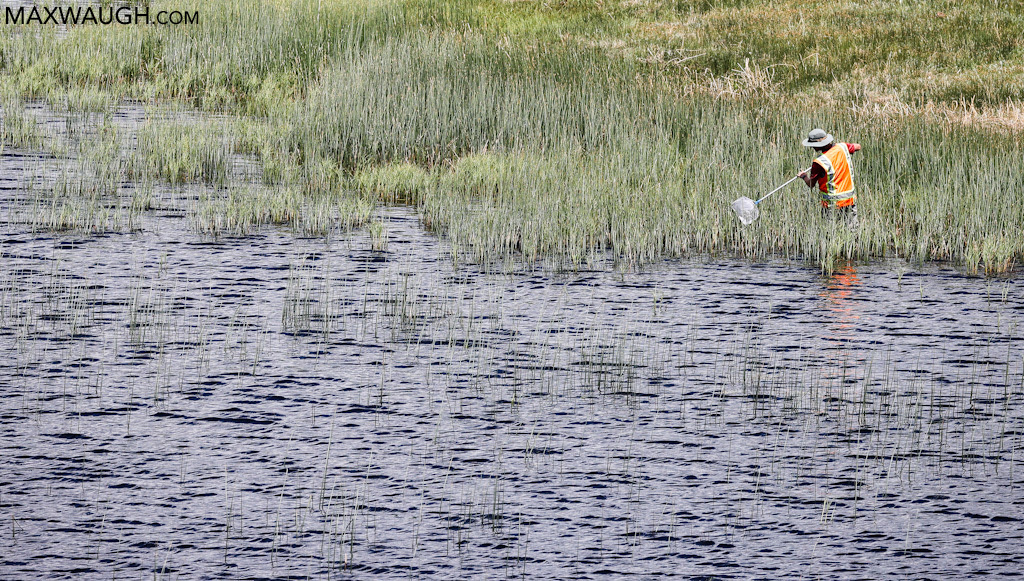 The afternoon session was incredibly quiet. We drove a lot, but failed to find more subjects to photograph. A fox dashed toward and then quickly turned back from the road near Elk Creek. A pronghorn that had been pregnant before lunch was mothering a newborn fawn after.

Late in the day, I made the mistake of venturing a bit too far east… and we ended up sitting behind the road line painting crew on the way back (zooming along at 7mph). During the slow crawl, client Gene quipped, “this is like watching paint dry!” Crickets.

It was a quiet end to a fun week. Big thanks to my clients on this trip! Though wildlife sightings and photo opportunities may very week to week, the people are ultimately what make all the time we spend in the field memorable and special. This group endured larger-than-normal crowds, hotter-than-normal temperatures, and occasionally-worse-than-normal drivers, but made it such a pleasure to share Yellowstone with them this week.

If you’d like to join me on a future Yellowstone tour, a second winter trip has been added for January 23-30, 2022, and has spots remaining. The next spring tour will likely take place in 2023.