I was off in Africa the last two weeks, so I could pretend the Huskies were 0-0 as I returned to Montlake for the first time in two years. I suspect I’m still on Zambia Time, so I opted to take it easy today with a reduced kit. My body always struggles to adjust to the rigors of shooting football (it’s terrible on the back and knees), and with a day game I was able to leave the big lens behind.

Plus, it’s a good test for my all-mirrorless kit, which will be put to use photographing sports for the first time. The following photos were taken with the Canon R5 and R6, 100-500mm RF lens, and 24-70mm 2.8 EF (with adapter). Next week the 600mm will be back, assuming I’m not still jetlagged.

The weather actually didn’t look bad initially, despite a wet forecast. Well, that changed. The proceedings eventually reminded me of a wet night at Husky Stadium back in the Dark Years, when Stanford came in and rolled to a 31-0 lead at halftime. I didn’t stick around that day, with gear soaking wet and not much happening on the field. I felt the same way today, though the news was much better with the Dawgs up 28-0. I moved to the press box at halftime to quickly process the following shots and head home early. Time to catch up on sleep! 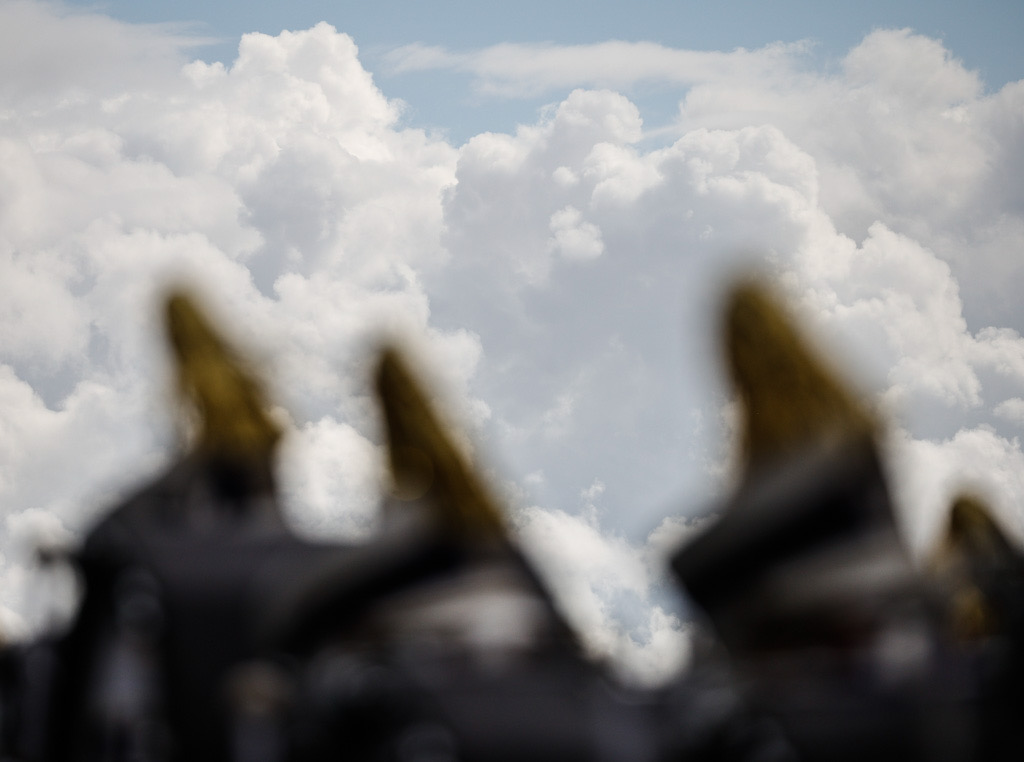 The afternoon started with dry skies at least. 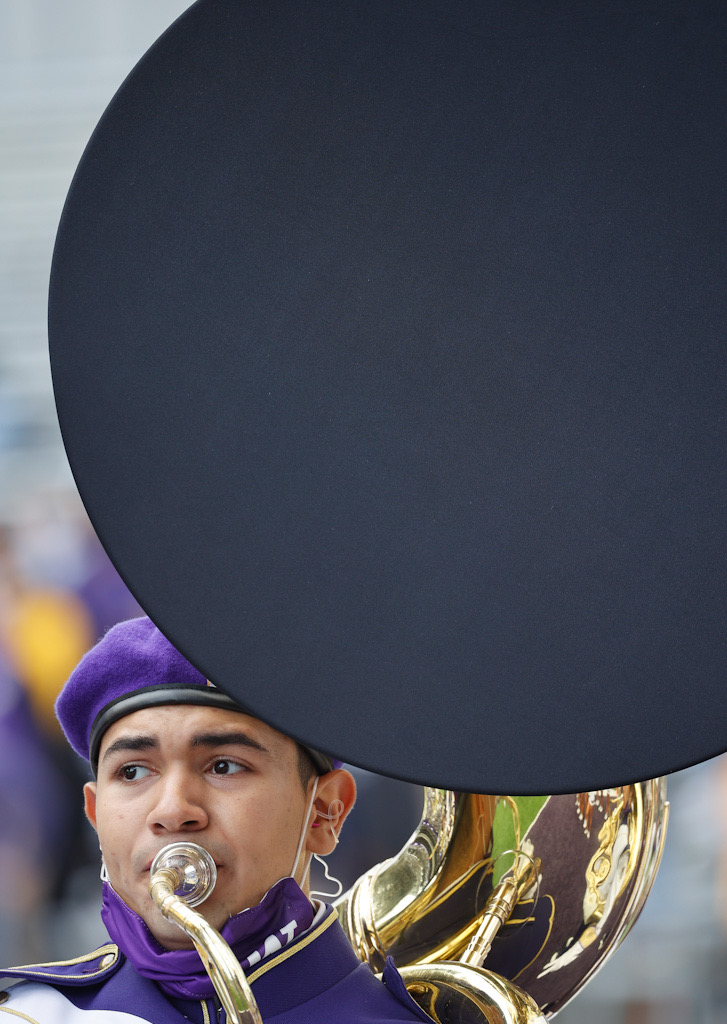 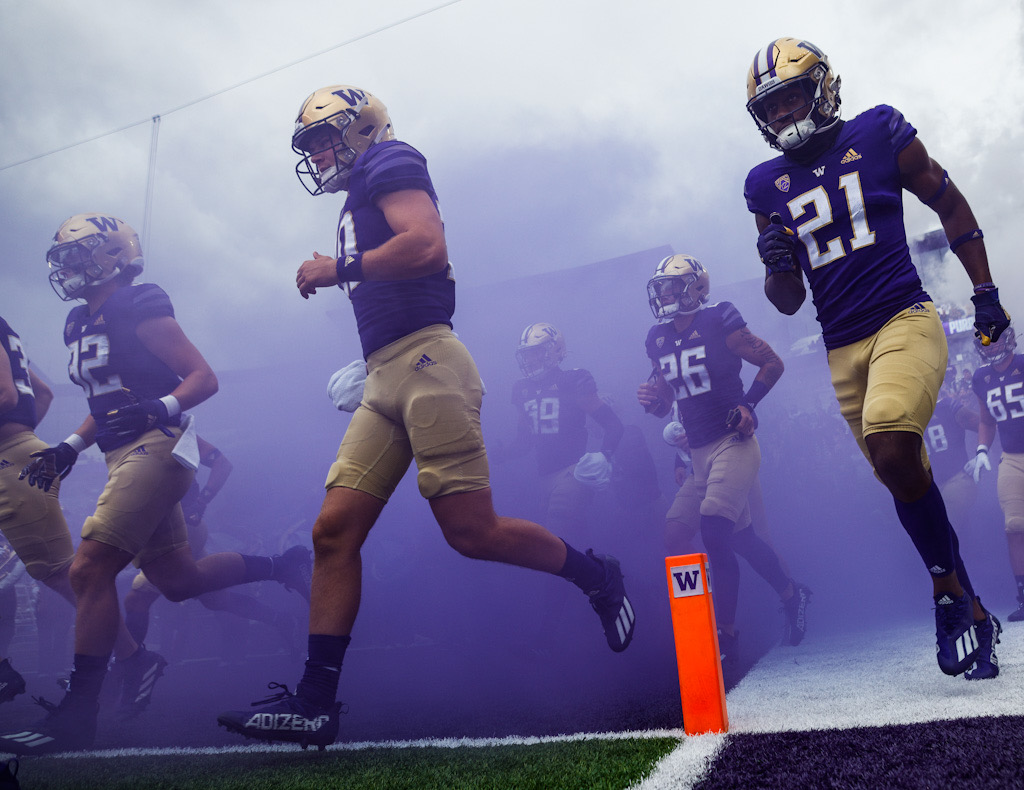 The Huskies enter the field. There was enough haze today. They probably didn’t even need the purple smoke. 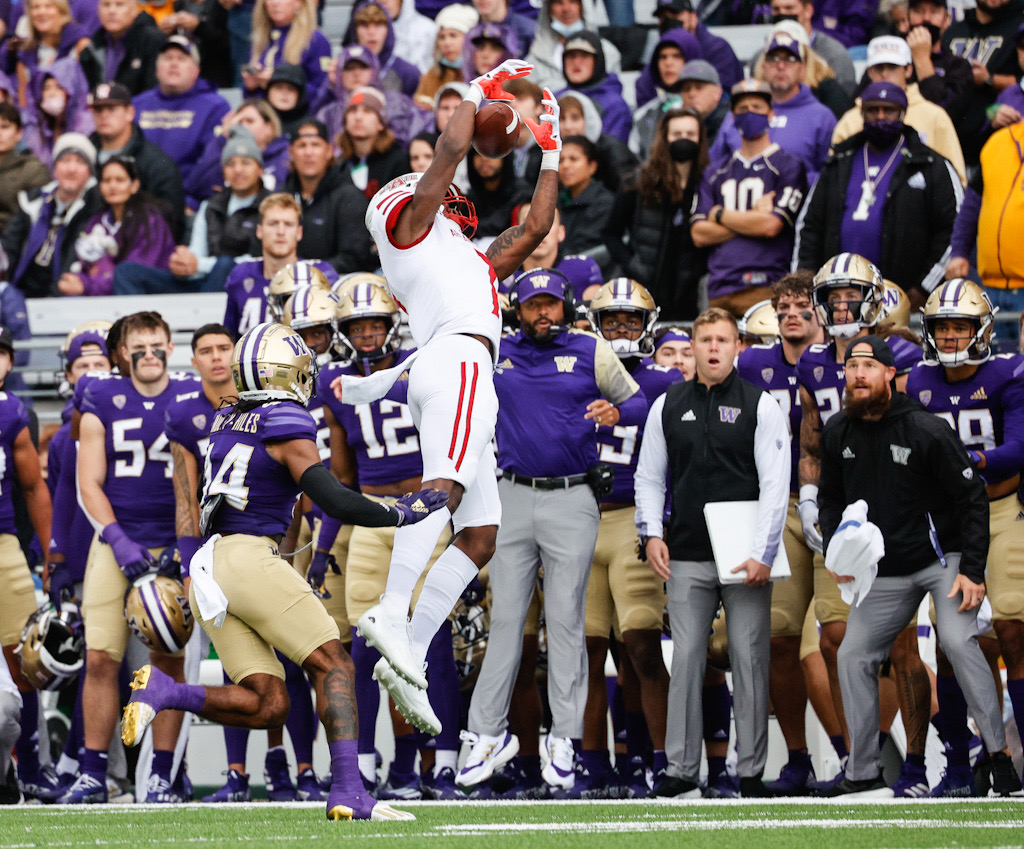 The ball slips through the receiver’s fingers as the Husky bench looks on. 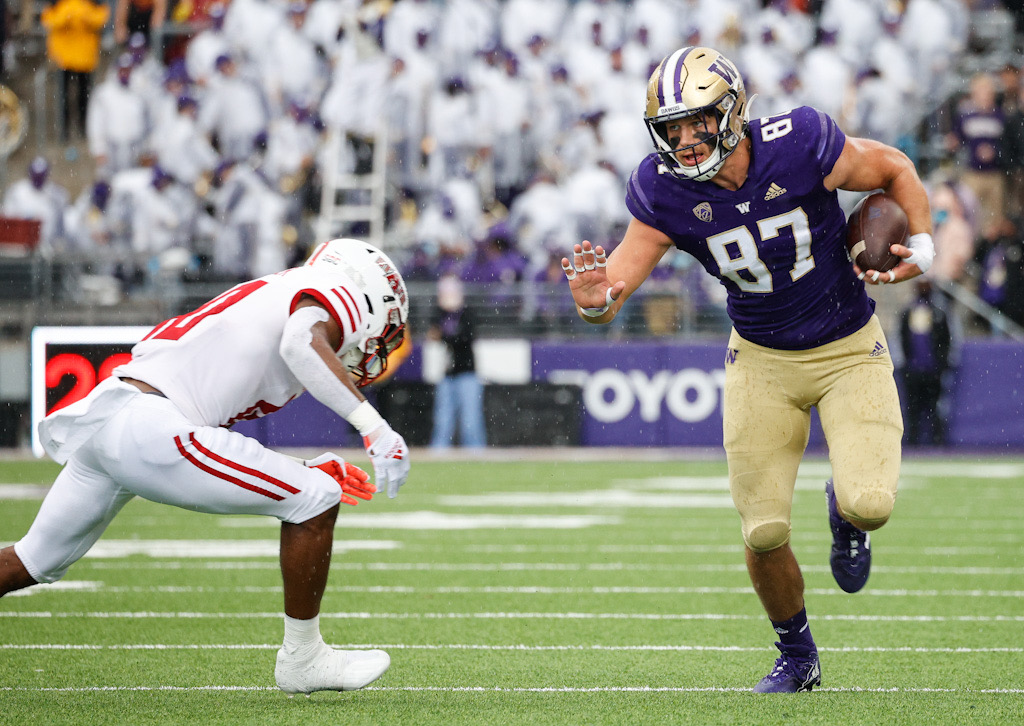 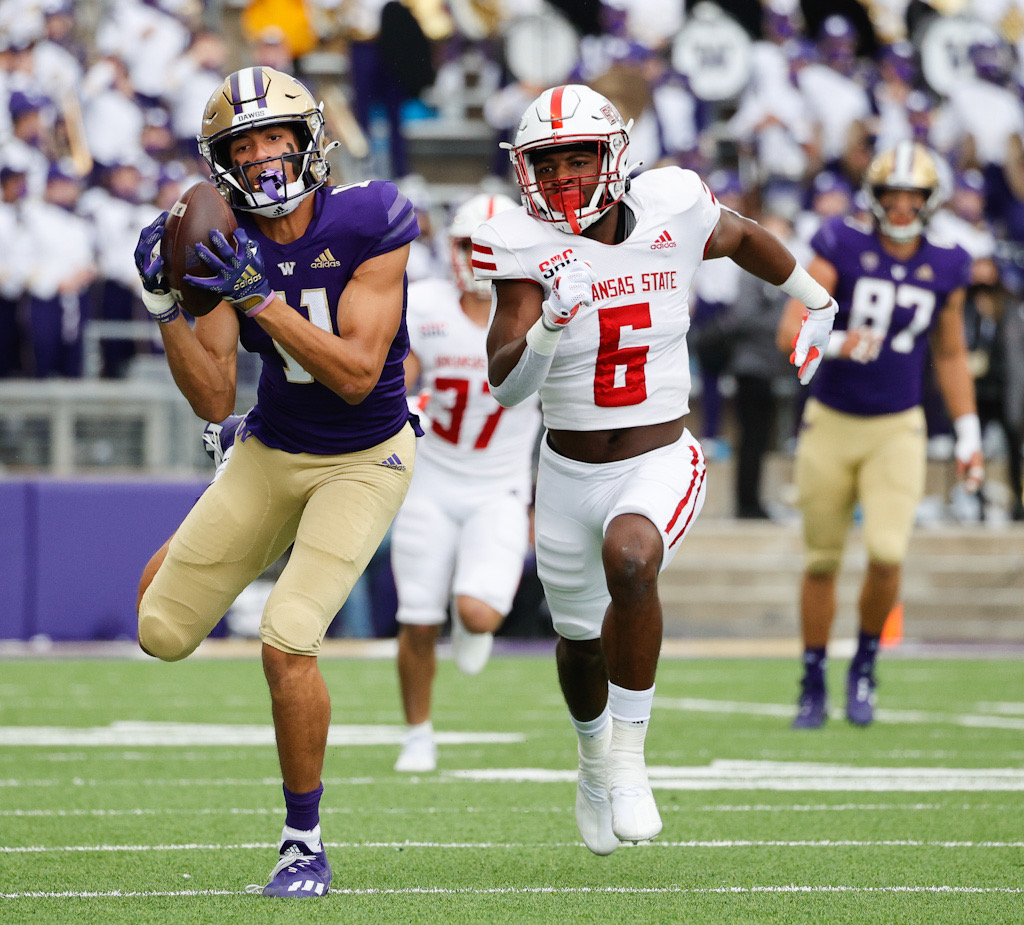 Jalen McMillan had himself a half, becoming the first PAC-12 player with 150+ yards receiving in a half since UW’s John Ross in 2016. 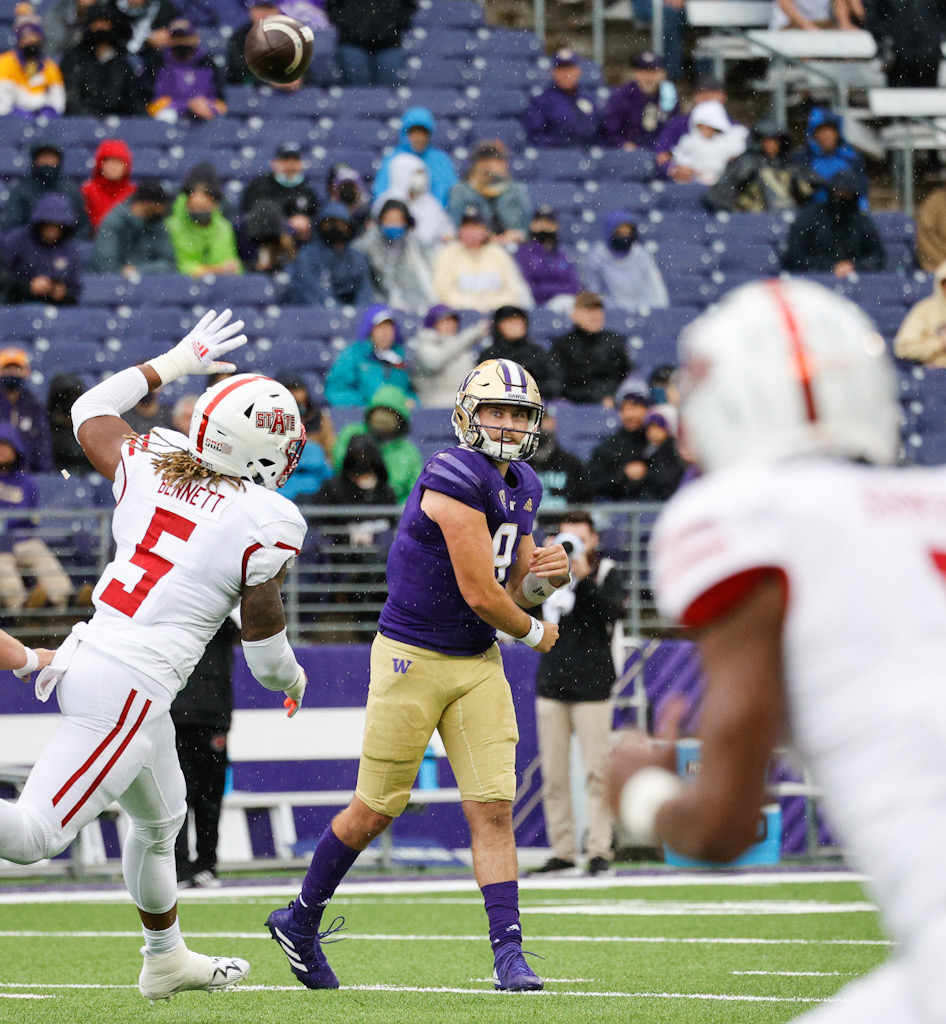 Dylan Morris threads the needle, finding Taj Davis (not pictured) for a completion. 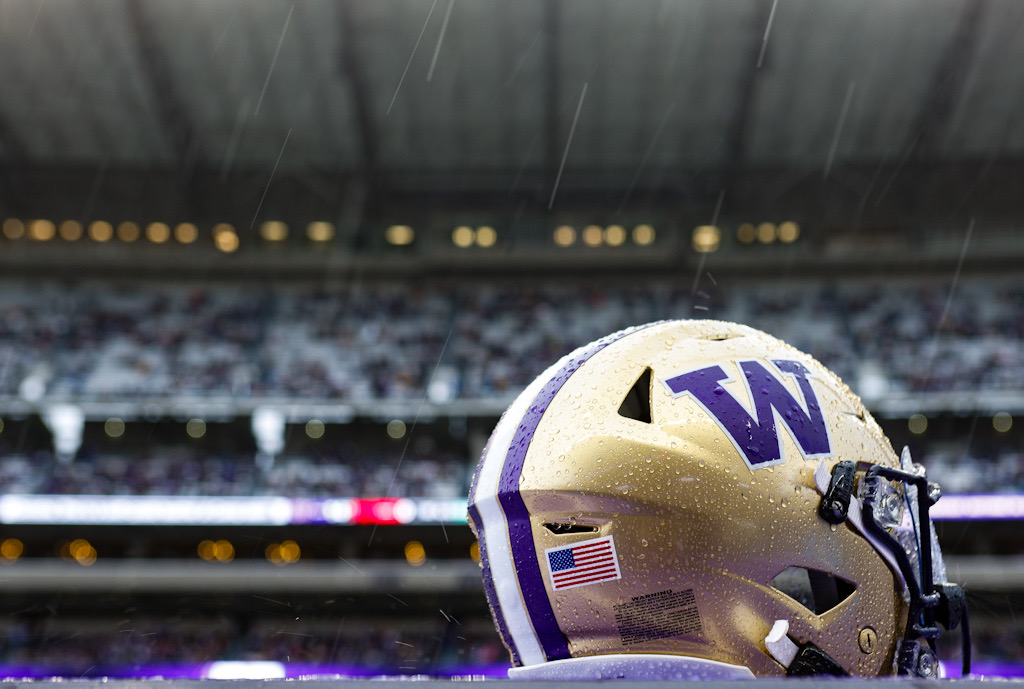 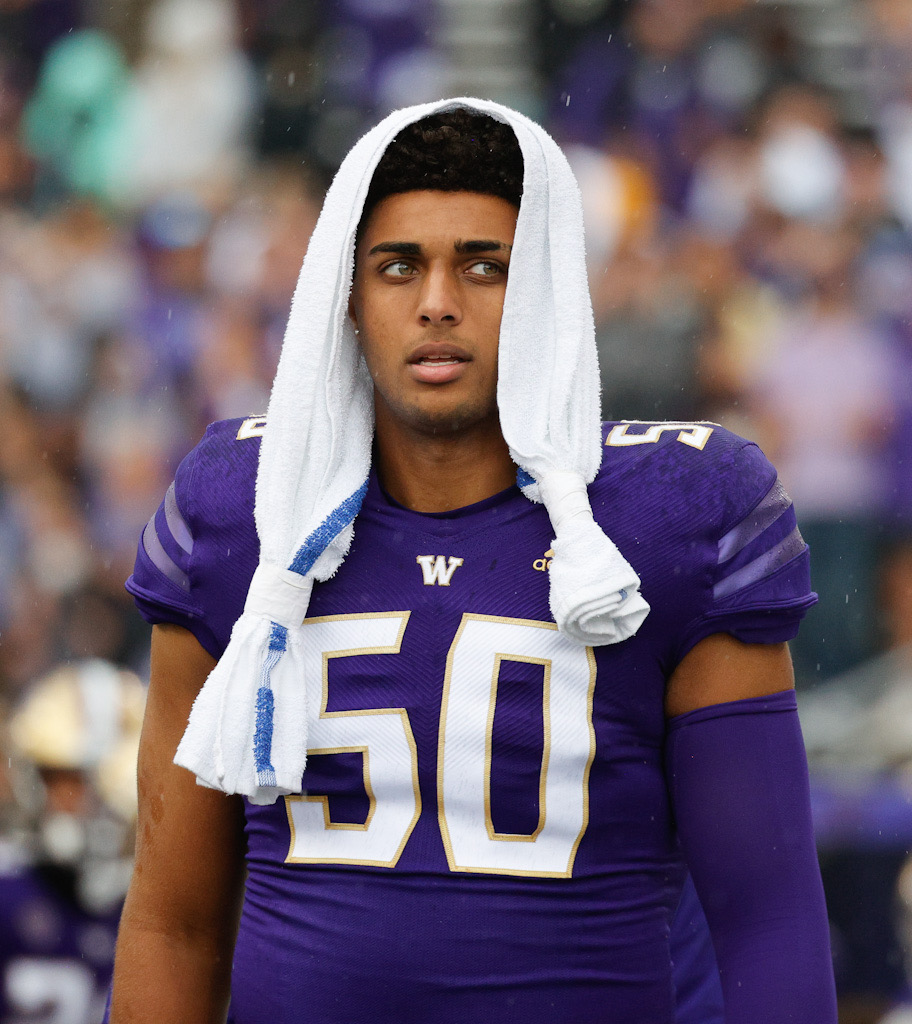 I should have asked to borrow Jahleel Heath’s towel. 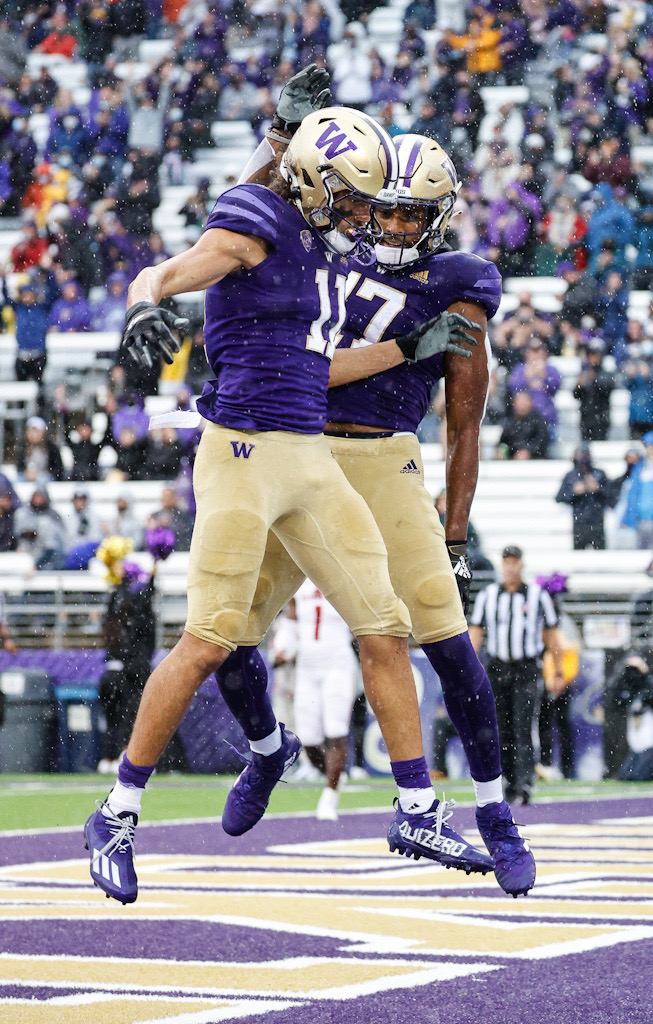 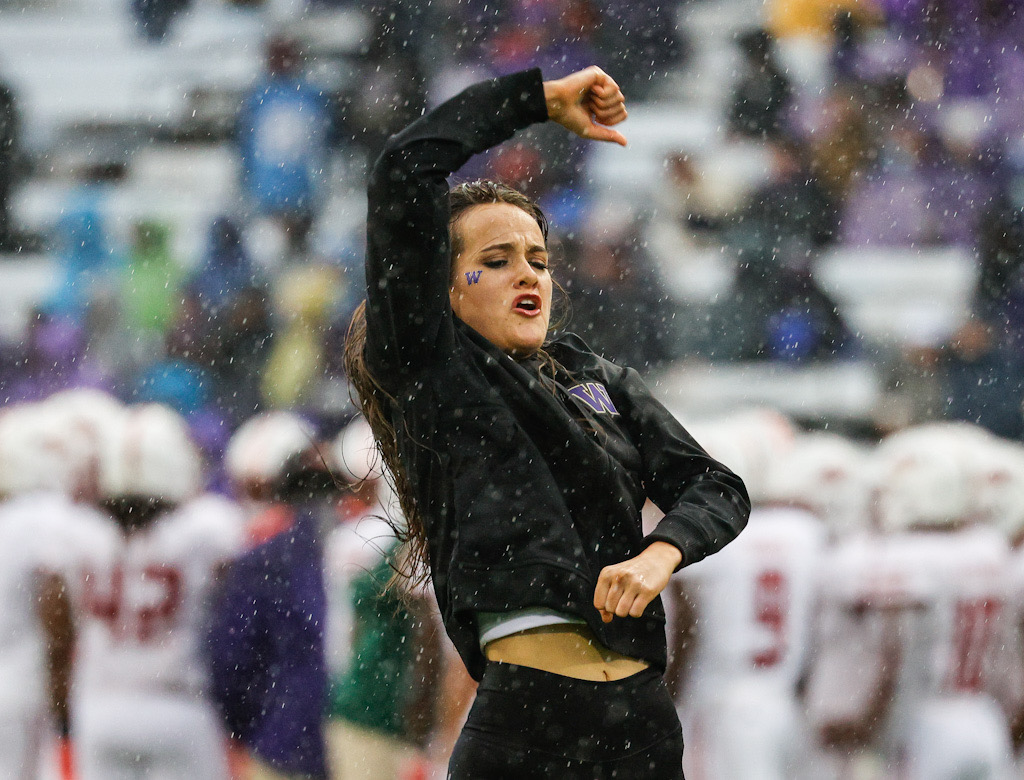 The UW dance team puts on a show, rain or shine. 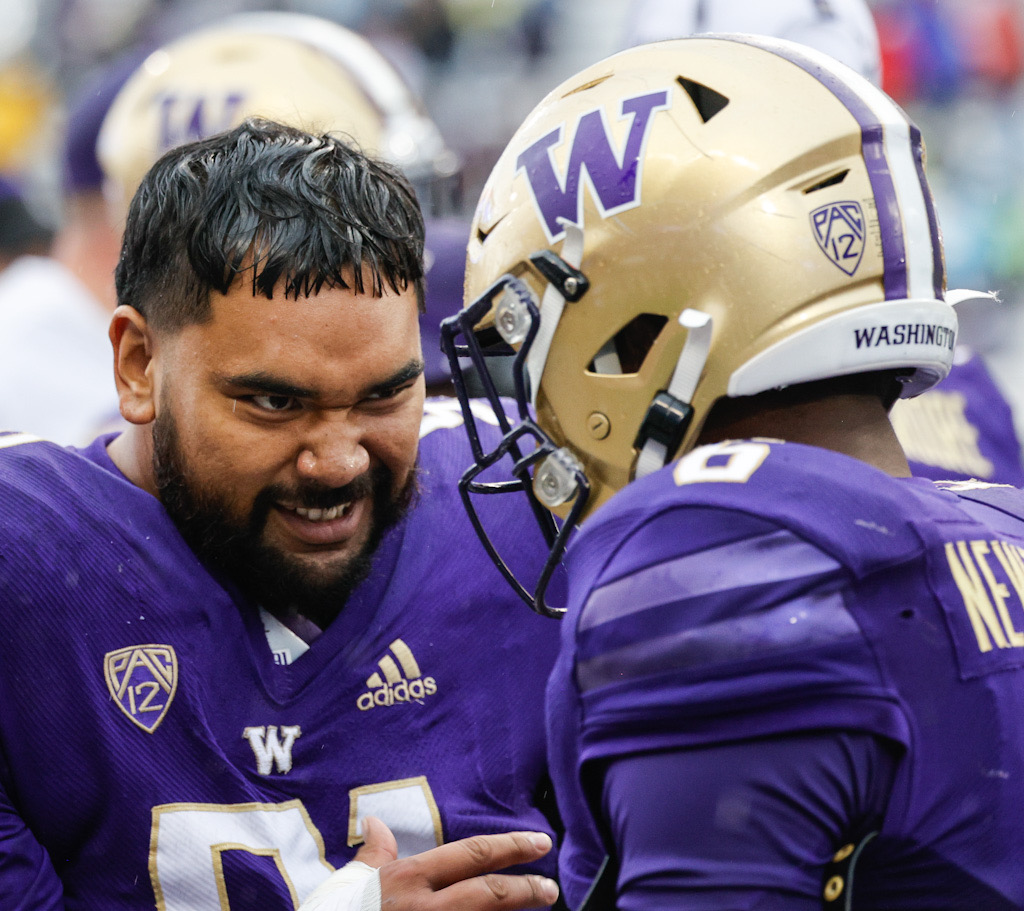 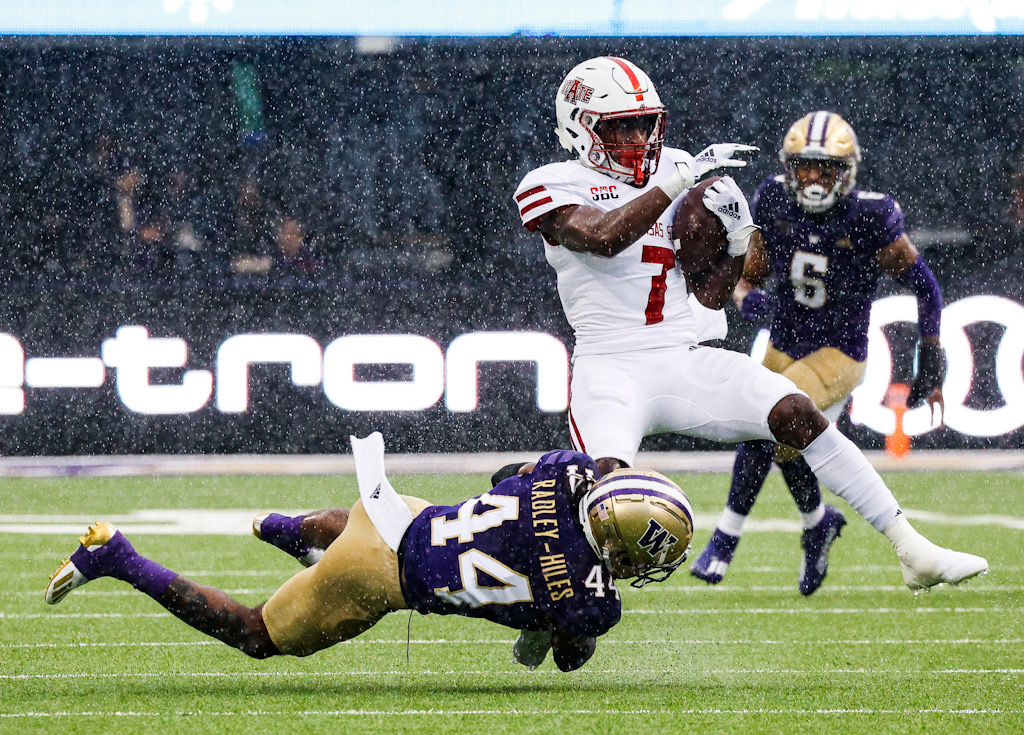 Brendan Ridley-Hiles Wraps up the Arkansas State receiver as the rain really starts to come down. 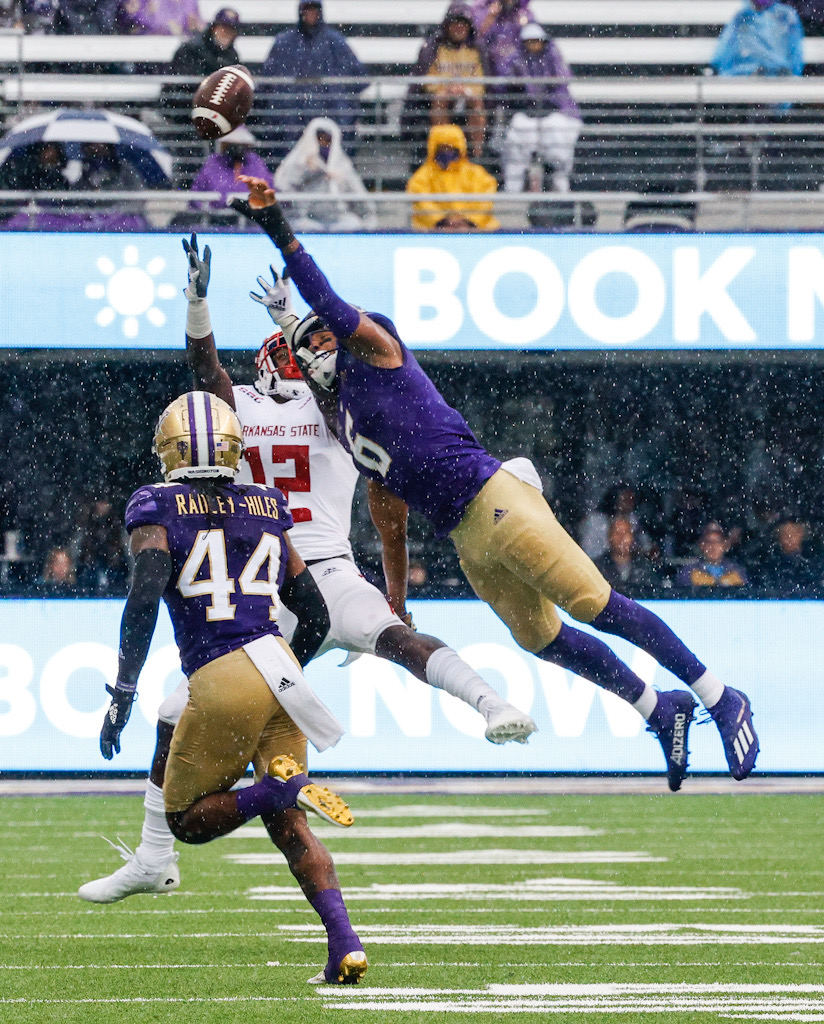 Cameron Williams flies in to break up a pass. 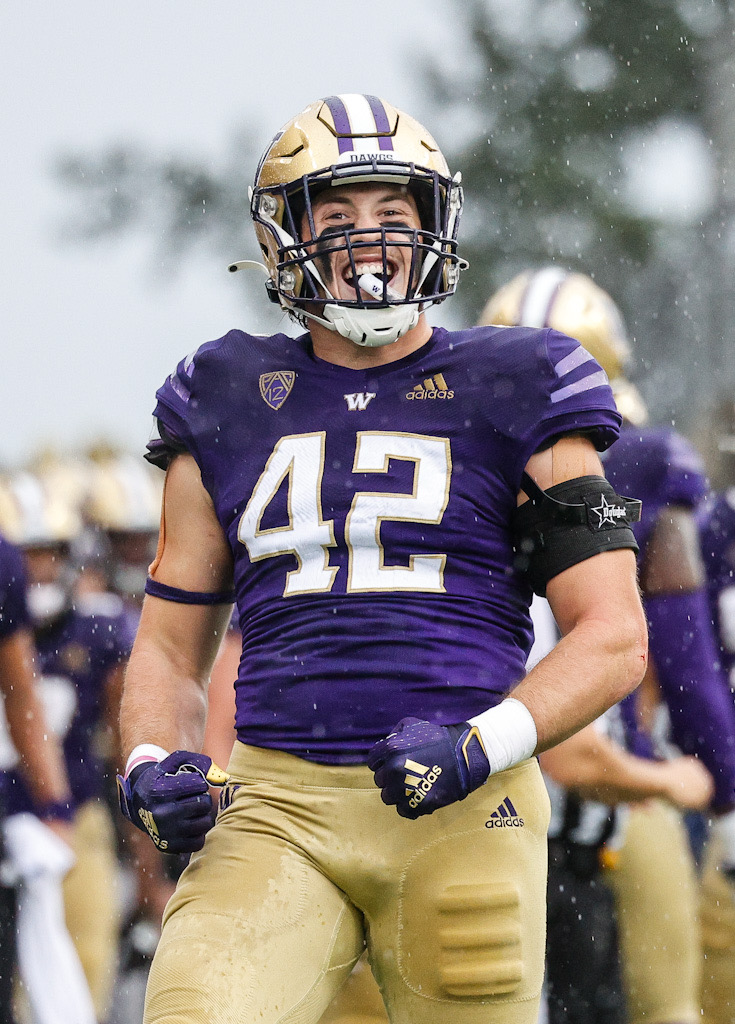 Carson Breuer celebrates after thinking he caused a fumble. The refs ruled the runner down.

I will be back in the stadium next week for the full proceedings!