I began writing up my latest post on Facebook, and as with my recent Pangolin Quest article, the words kept flowing… so I’m back in the blog to babble a bit longer about one of the highlights from our recent South Africa trip.

During our visit to South Africa in July and August, we recorded several highlights. Between the pangolin, all the owls, some great lion cub sightings and so much more, it was a fun and memorable trip. One of our best moments was not only a rare amazing thing to witness, but one with a bit of a personal backstory for myself and Jenn.
Back in 2010, we made our first visit to South Africa. I specifically planned a trip to MalaMala Game Reserve for leopard photography. We had been fortunate to see several leopards in Tanzania a few years before and I was fascinated by these beautiful cats. Fellow photographer Hennie van Heerden had spent quite a bit of time at MalaMala and urged me to go. So we split off from the group of friends with whom we had spent a week in Kruger National Park and headed to the reserve (agreeing to meet them at another private reserve in the Sabi Sands later). When we arrived at MalaMala and began to chat with our ranger, Dean, I mentioned my leopard goal. He said we were in luck, as there was a female leopard with a very young cub that had been seen recently. 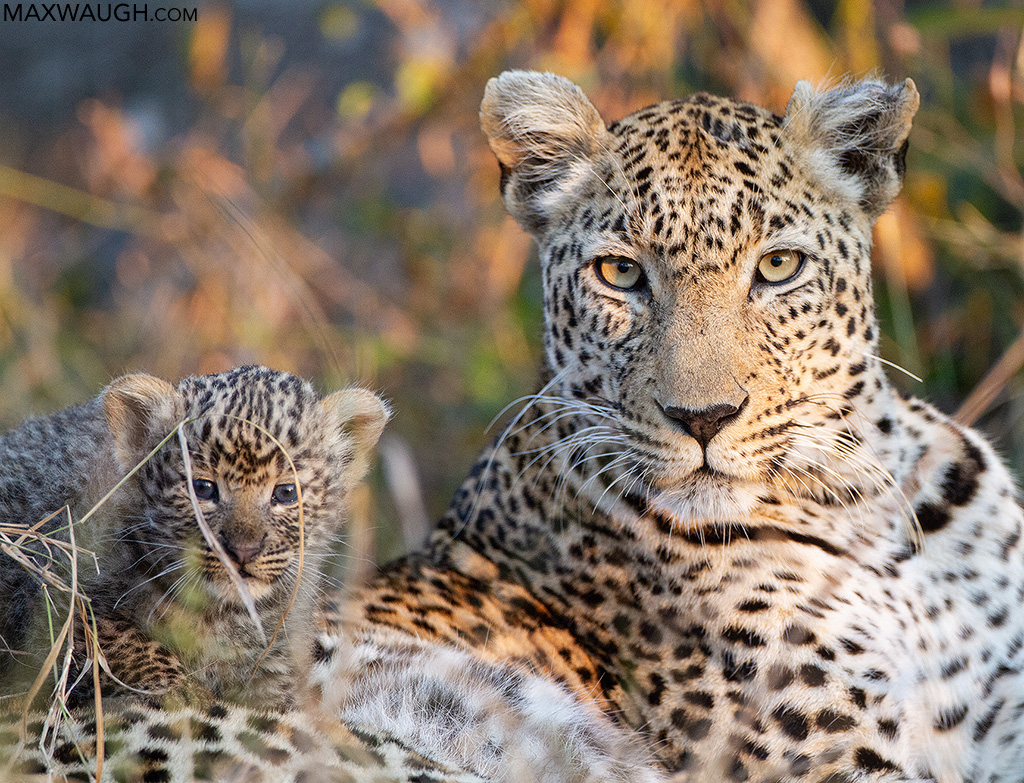 The Jakkalsdraai Female and her five-week-old cub. 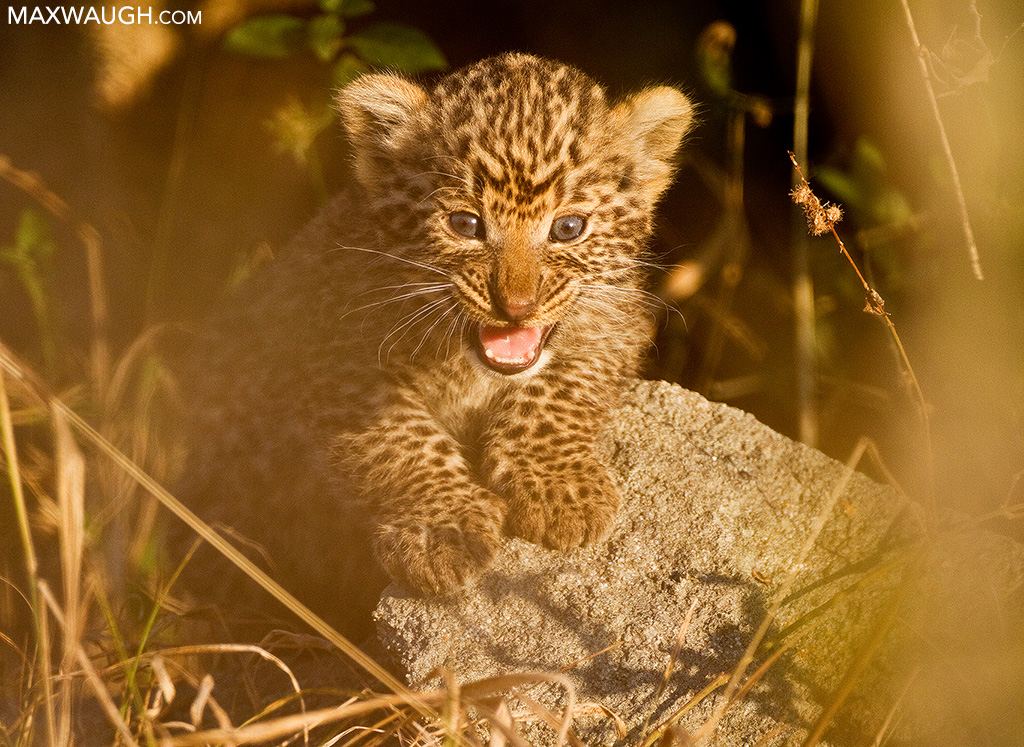 It was our first time seeing a cub this small. It still had blue eyes and was adorable!

We were able to photograph the family every day during our stay, seeing the adorable 5-week-old cub during each visit in what ended up becoming one of my favorite series of wildlife encounters ever. It was also quite productive, as one photo of the cub landed on the cover of Africa Geographic and another won the MalaMala photo contest! 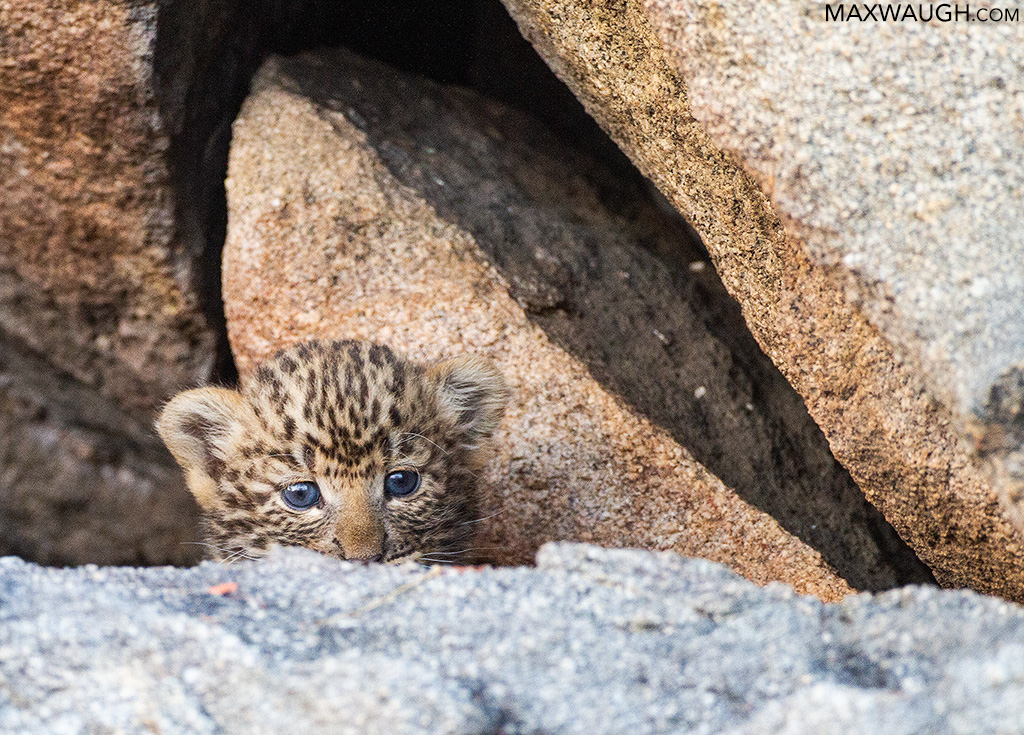 On our second day, Mom wasn’t around, so we were not allowed to linger at the den… but the cub peeked out at us briefly as we pulled away. This shot ended up on the cover of Africa Geographic Magazine, with a feature on the mother and cub inside.

During our final day with them, we got to witness Mom moving her little one to a new den site. Hyenas had been through the area, so she wasn’t taking any chances. She picked up the cub in her jaws and headed straight for us. I wasn’t ready. I snapped a couple shots with my 500mm lens… too much lens! 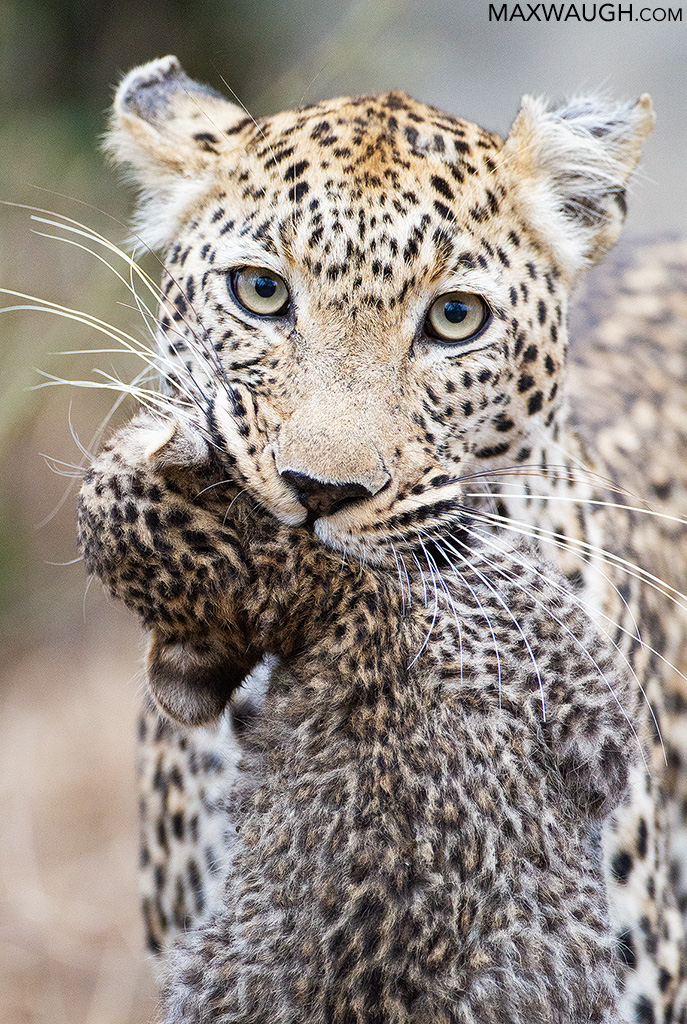 Jenn was armed with a medium range zoom and did better in capturing the full scene, barely fitting the cats in the frame. 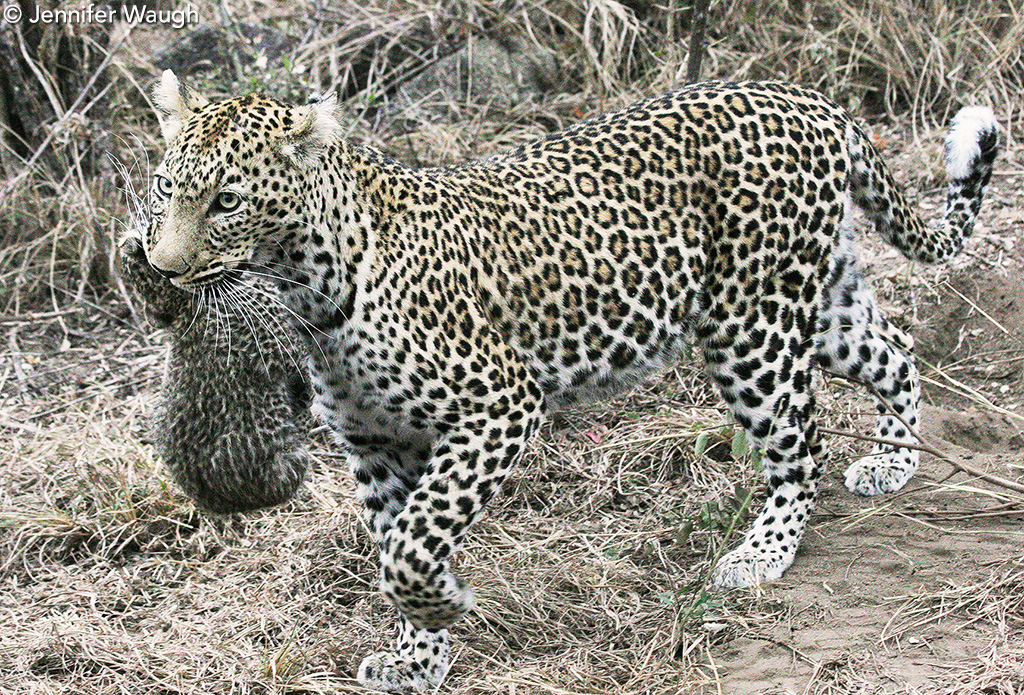 That day stuck with me… for eleven years! I vowed that if we were ever blessed with a similar opportunity, I’d be prepared with a more versatile lens. Africa trips came and went, and we never had it happen again. It was rare enough to see cubs that young. On a subsequent trip we had a very brief glimpse of a young cub peeking out of a den, but that family seemed comfortable where it was at. 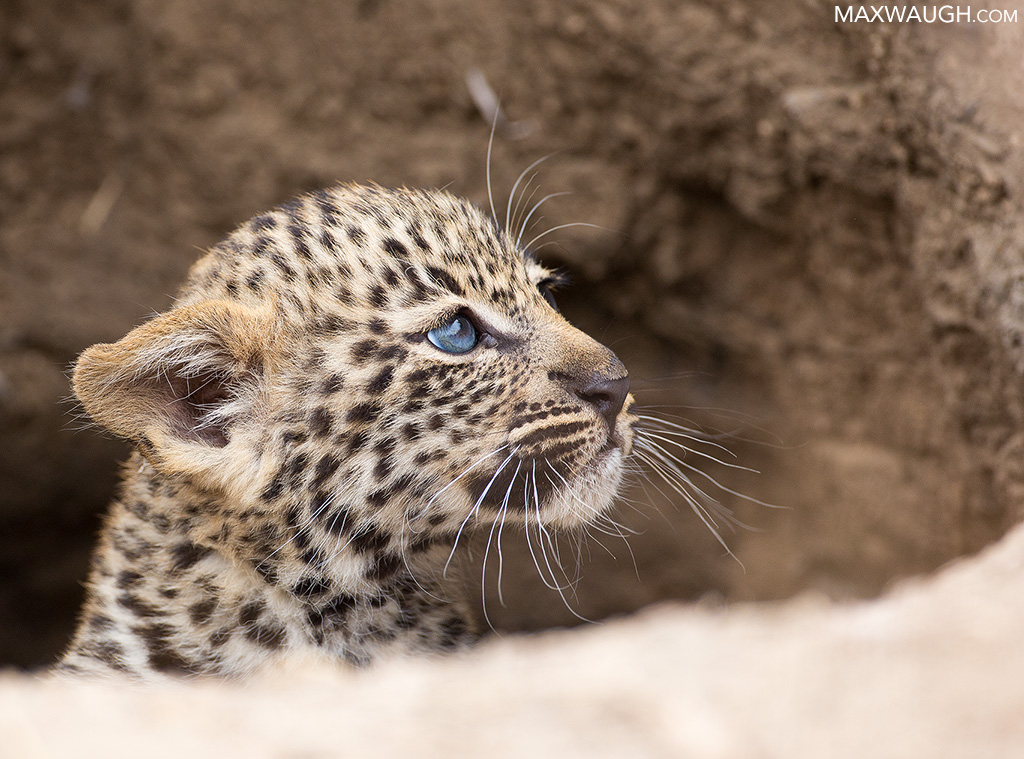 Fast forward to this year. On this particular morning, Jenn and I were split up. Given the size of our group, I was bouncing back and forth between vehicles in order to get a chance to spend time with all of our guests. I happened to be in the vehicle without a working radio headset, which meant we could listen in on all of the conversations MalaMala’s rangers were having. We were stationed a leopard sighting—a mother with two ~5-6 month old cubs that had put on a nice show in the preceding days—when a report came through on the radio of another leopard carrying a cub.
“How old?” Another ranger put forth the question.
“Very, very small.”
Wow. I was already having flashbacks. Of course, when stuff like this happens, it may be some distance away in the reserve, so even if you know what’s going on, there’s no guarantee you can get to a sighting in time. And, in such a case with extremely young cubs, MalaMala limits the vehicle presence at a sighting. So all we could do is sit there and listen while keeping an eye on our own mom and cub in the tree above us.
Eventually, we heard Ranger Dan, who was driving Jenn’s vehicle, chime in. He asked if he could join the sighting. For Dan, this was also a personal story. He had been on hand when the adult female, now moving her own cubs, was moved by her mother as a cub. Seeing her going through the same ritual with her first set of cubs would be quite a moment for him. They were allowed in.
I felt stuck, and a bit bummed that we’d miss out, but was relieved that Jenn would get a chance. She’d been taking better and better photos throughout this trip, so hopefully she could come through for us. “They’d better make the most of it!” I exclaimed (exclaimed, yes…. I don’t think I muttered jealously).
She did. 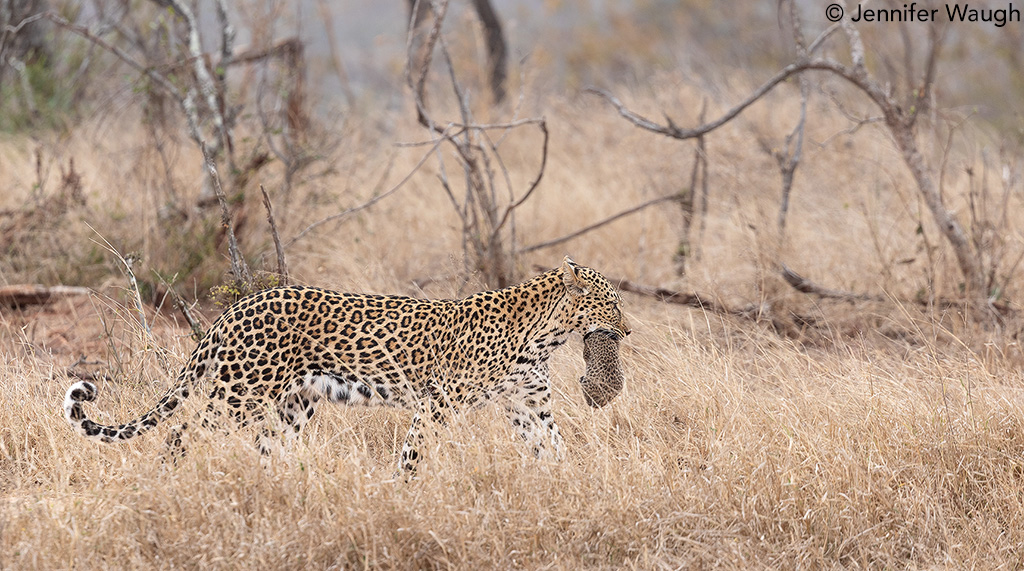 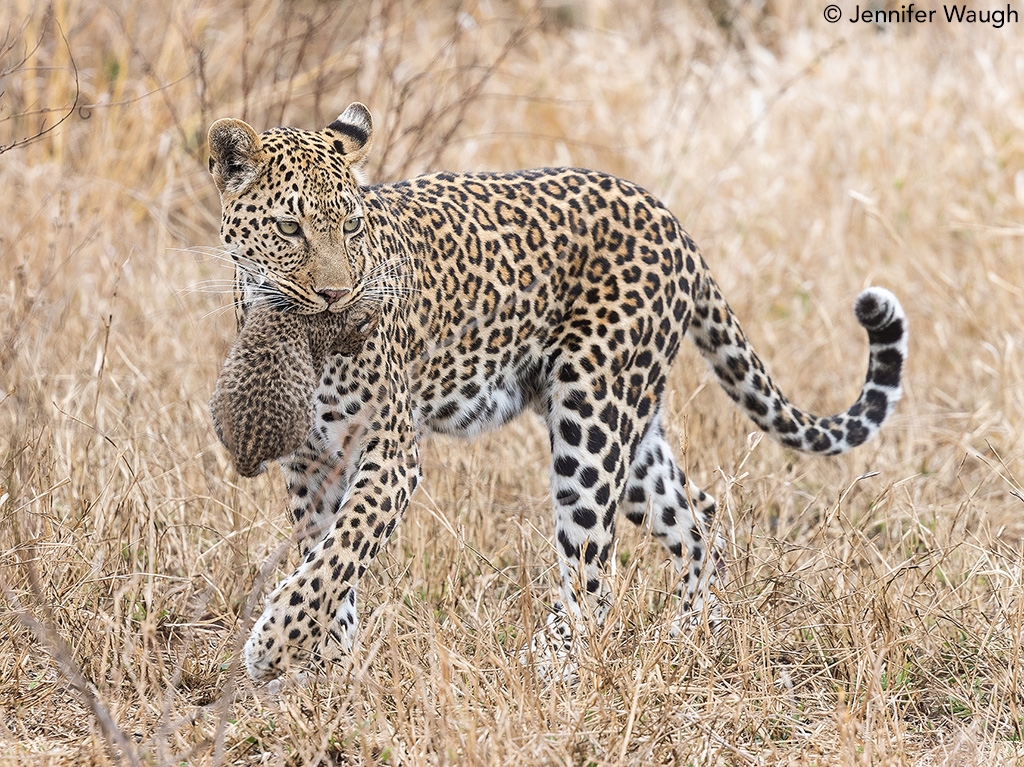 Jenn was in the vehicle that got to stick with Mom for a while. 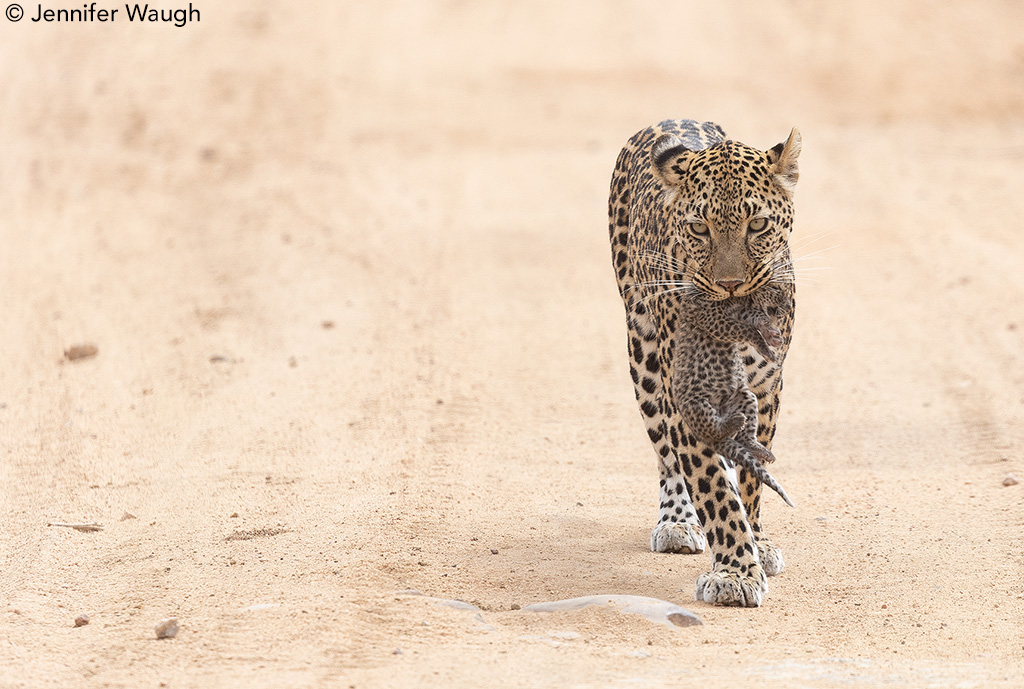 They had a chance to watch her retrieve a second cub and bring it back down the road.

We continued to listen to the play-by-play. The leopardess had deposited one cub and was heading back. So there was at least one more. It was getting close to the time for us to return to the lodge, so our ranger Piet requested a quick look at the drama as we drove through the area. Request granted, and we were on our way. We’d get one shot as she passed by. This time, I made sure to grab the zoom lens when she got close. 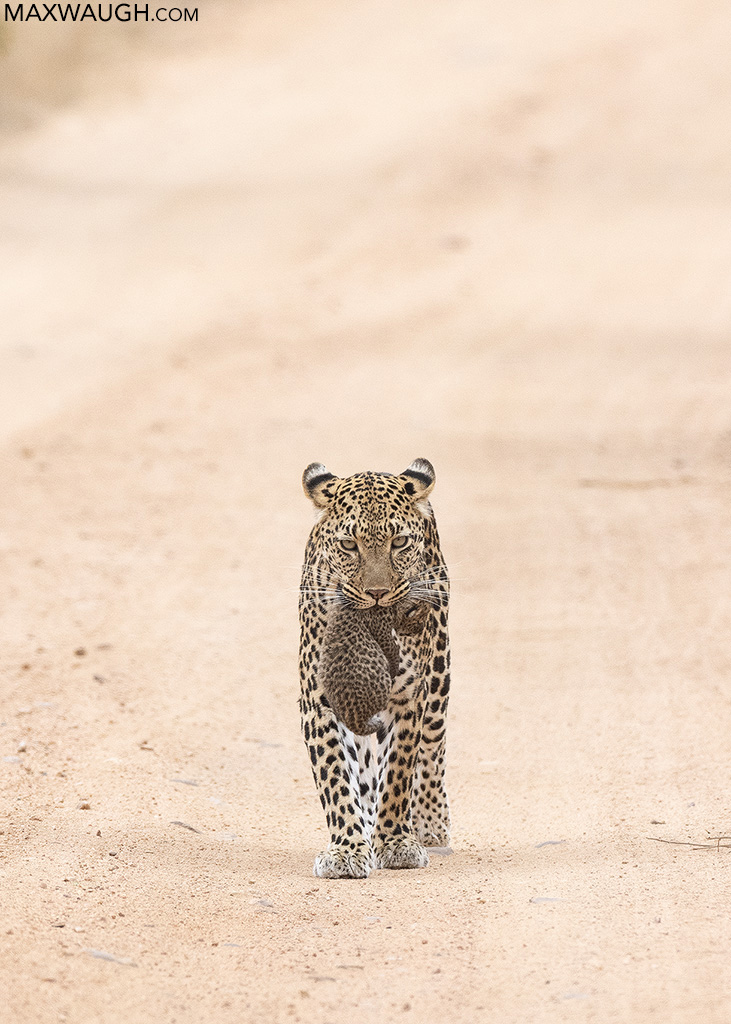 This was my one chance to photograph her. I made sure to keep her full body in the frame most of the time! 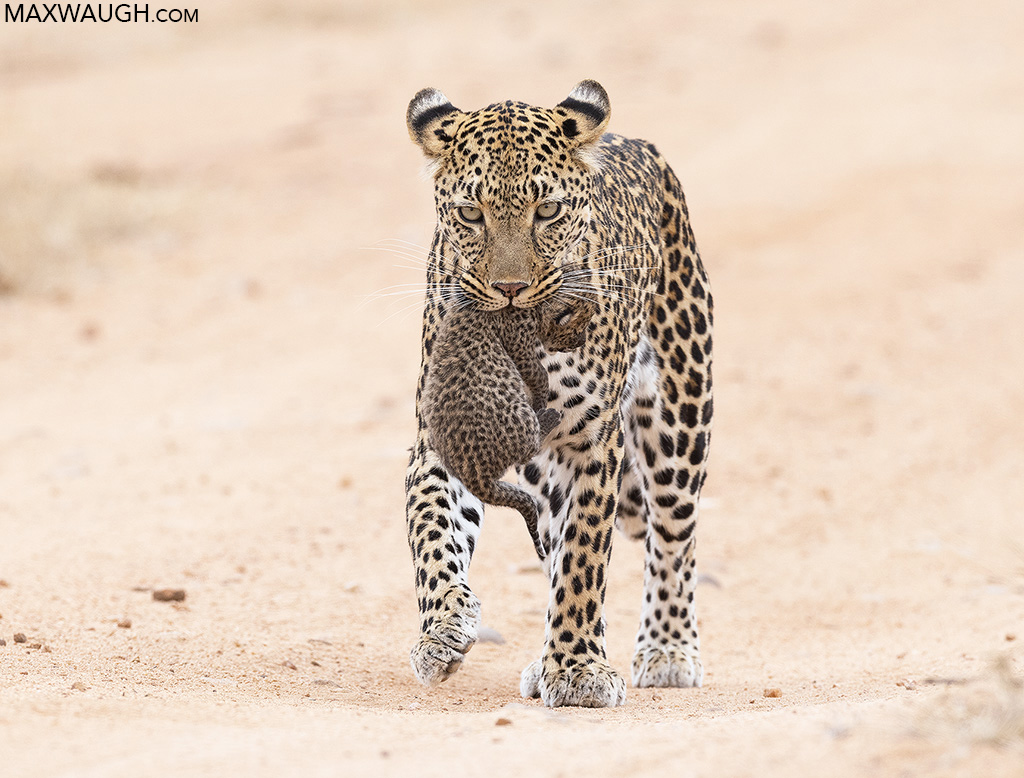 This cub was way smaller than the one Jenn and I had seen all those years ago. The rangers estimated the cubs to be only 1-2 weeks old. Wow. Surely the youngest leopard cubs I’ll likely ever see! 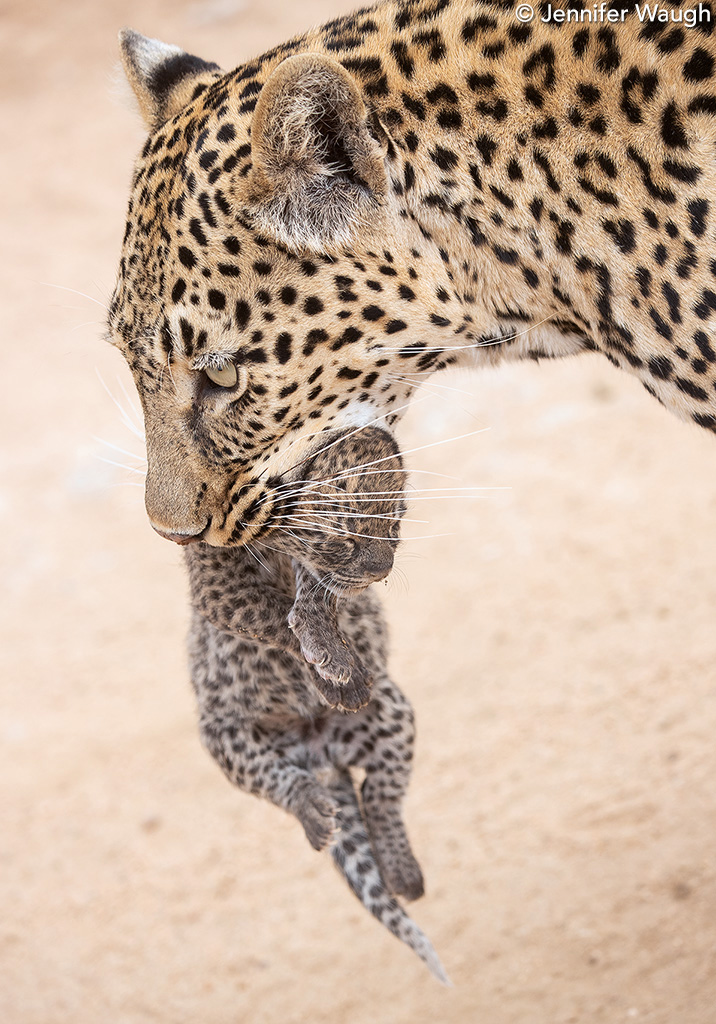 The cubs were estimated to be only 1-2 weeks old.

It really was a special experience, and between Jenn’s prolonged sighting and my brief glimpse, we captured the moment quite well. Jenn’s wider black and white shot (shared in a previous blog post) is one of the best photos she’s ever taken, and will end up in our year-end list of favorites for sure. Perhaps it’s even a candidate for another MalaMala photo contest win. Fingers crossed!
To see more photos of this encounter, as well as our other big cat highlights, check out the South Africa 2021 Big Cats gallery in the archive.
Posted byMax
Tags:2021, big cats, cub, leopard, MalaMala Game Reserve, South Africa
0
0
Share: