I’m back in the park for one final adventure this year. I flew over from Seattle, joining a couple of friends for the next week or so. The big news this week is the weather. Snow storms have forced daily road and gate closures as the park scrambles to deal with serious winter conditions half-way through the autumn season.

You never know what to expect at this time of year (except, perhaps, for unpredictable weather). Last year, my later trip in October ended up being better than expected in terms of wildlife. Who knows what this year’s fall visit will bring.

We arrived in the afternoon, making a detour along the Old Gardiner Road on our way toward Roosevelt Arch. We saw white-tailed and mule deer, and several pronghorn. Following a quick lunch in Gardiner, we finally drove through the (new) north gate.

Our first stop didn’t take place until we crossed the Lamar River Bridge. A very dark raptor perched on a tree above the river. I had to peer through my lens to confirm that it was a young dark-morph Red-tailed Hawk. At least, the speckled, chocolatey brown feathers gave that impression. I’ve only seen one or two dark morph Red-tails before. A cool “first” sighting for this visit. 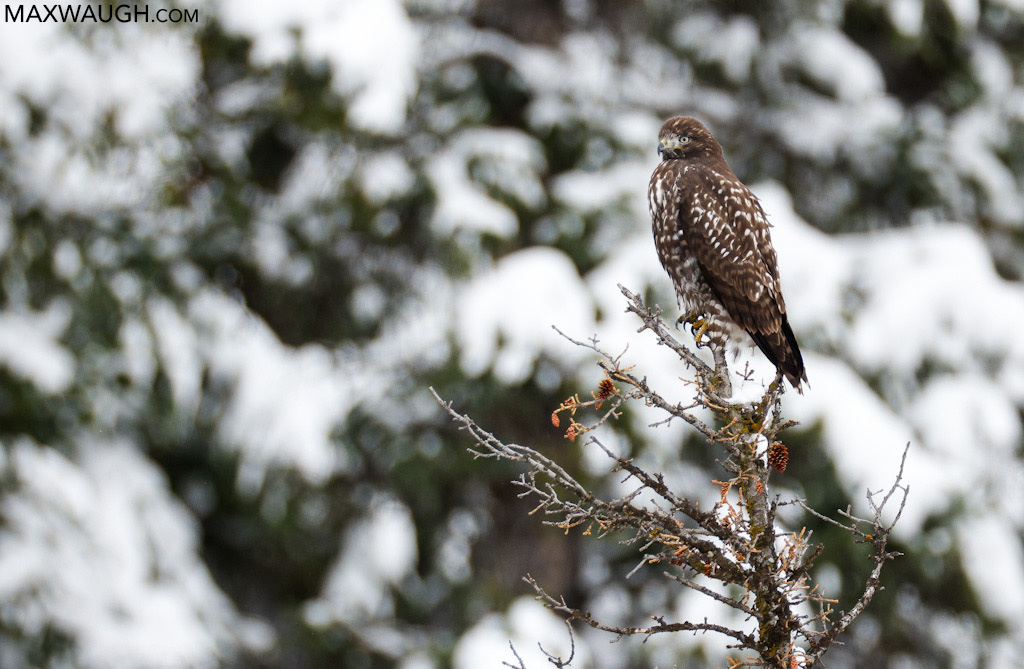 In the Lamar Valley, numerous bison were crowding the road in the east. We pulled over to await their approach. Meanwhile, a small group of bison walked from the cottonwoods near the river and waded across to the southwest.

The larger herd kept plugging traffic on the road. A long line of buffs threaded their way next to road in our direction, passing in front of some still-gold trees in the background. The combination of fall colors with winter white is pretty awesome. 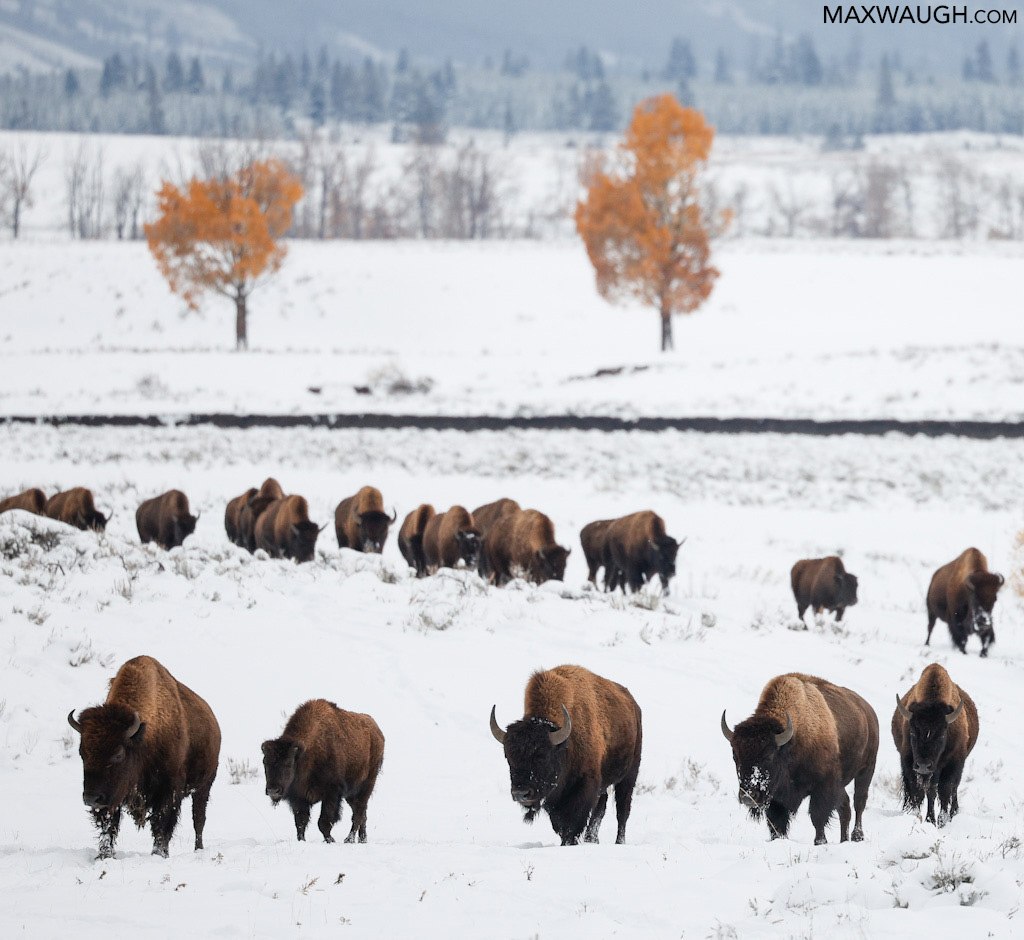 Our remaining drive was low key, and we arrived in Silver Gate as darkness fell. It’s good to be back.

There wasn’t much desire to hit the road super early, especially with many stretches of park road still closed this morning. It was starting to lighten up as we entered Yellowstone. Unsurprisingly, one of our first sightings this morning was a red fox along the road. This was a common sight this spring, and dating back to last fall.

The fox eventually disappeared into the trees. We headed to the Lamar. Stopping at Hitching Post, we walked out along the trail to check the creek. A pair of coyotes walked in the flats. Around the corner, we caught sight of a Golden Eagle, perched quite low. 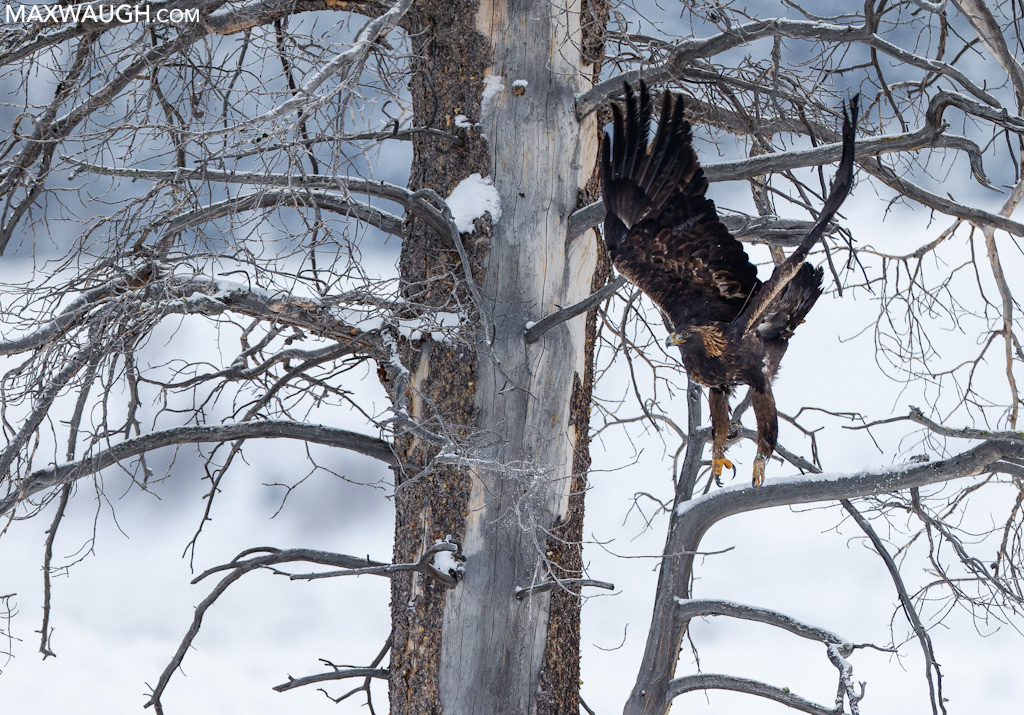 Bison were on the road in places, again. We drove through the rest of the Lamar and entered Little America, which was blanketed in low-hanging fog. As we neared Petrified Tree, we checked on the black bear family that’s been hiding below the road. With a scope, a barely-visible bear butt could be seen emerging from the shadows.

We were going to continue to the west, but were, um… rebuffed by a herd of bison that had just entered the road and was heading that direction. Not wanting to deal with that headache, we turned back. The bear was slightly more visible, but I was distracted more by the cooperative raven perching in the sunlight. It wouldn’t be a proper start to a Yellowstone trip if I weren’t photographing a raven. The wind would blow in occasionally and muss the bird’s finely-coifed plumage. 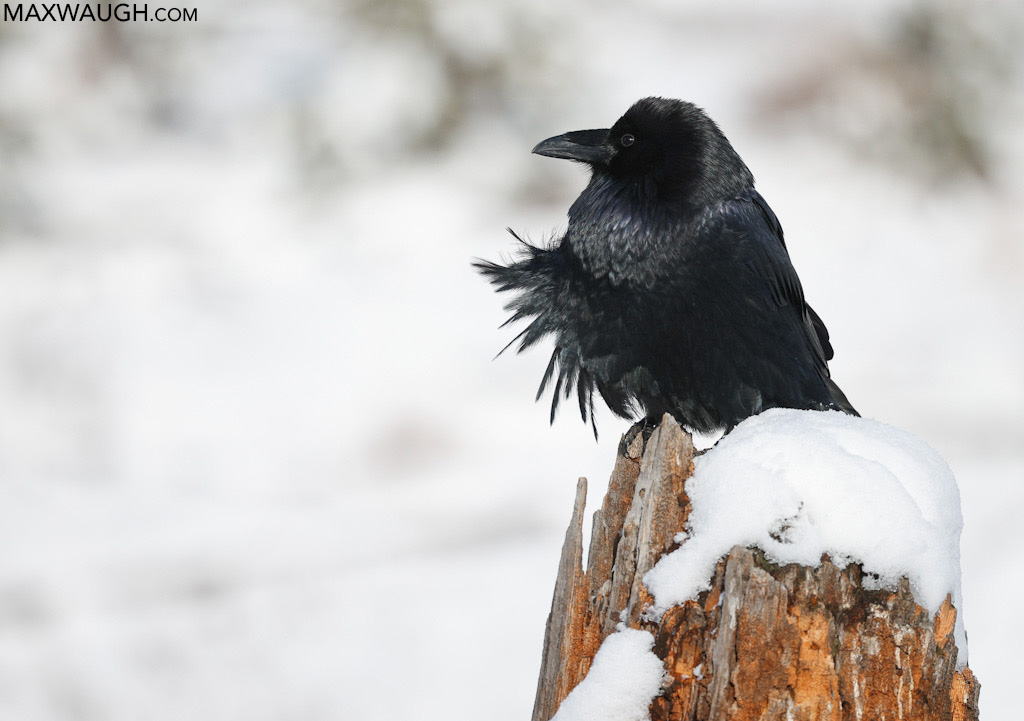 The fog had lifted in Little America, and we ventured down the Slough Creek Road for the first time. A distant Bald Eagle perched in one of the usual places. On our way back, we encountered a bison bull with what is probably the worst case of bed head I’ve ever seen. It was a day for disheveled looks (yes, that includes my unshowered self). 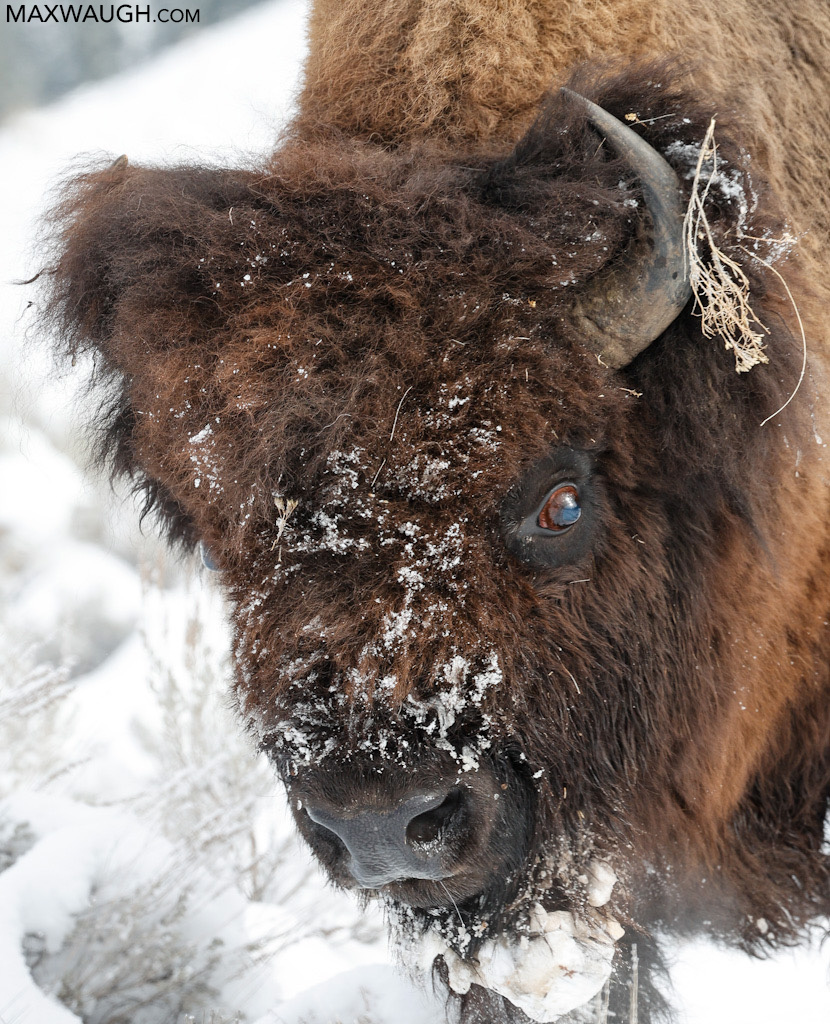 The Bison Hairdo calendar/book/photo project definitely needs to happen at some point.

We decided it was time to head south. The road was open to Canyon at least. Maybe the rest of the roads would open by the time we got there. And hey, that’s exactly what happened, so we were able to make it into Hayden Valley and down to the Lake. I was distracted at times by the sudden appearance of LTE cellular service, a new luxury I’ve never enjoyed in the park. This must be how the Verizon Half lives. That was actually useful, as I was able to reach some contacts who were roaming the area, so we could see what was going on.

On a distant slope in Hayden, we spied a grizzly bear roaming through the snowy sage. Too far for photos. We spent the next couple hours exploring around the edge of the lake (the east road was still closed), seeking owls and other surprises. Snow blew in occasionally, but we didn’t find a Great Gray perched in the photogenic conditions.

On our way back north, a coyote moused at Alum Creek, while a bull elk grazed in the distance. We made it all the way back up to the north without any notable sightings. Following our turn at Roosevelt, we approached the Yellowstone River Bridge, seeing a number of vehicles pulled over. Had to be a bear. Sure enough, a black bear was below the bridge. It swam across the river and went up the opposite slope.

We switched positions and waited at Wrecker. It came up right on cue and walked across the parking lot as we photographed out the window.

At the next bridge, we stopped briefly for a bull elk and his small harem. Darkness was descending, so we hurried home. Conditions remain hazy, with a constant threat of snow. In theory the coming days will be more calm, but with Yellowstone you never know!