Aaaaand we’re back. After three months away, I’m kicking off my 2022 travel slate with a couple of winter Yellowstone tours. Last year’s winter trips were great fun, so I’m hoping for repeat luck.

One problem: the park needs more snow! For about a two-month stretch between October and December, there was virtually no snowfall. I hoped the recent more-wintery conditions had made up for lost time, but as I arrived Wednesday evening, I could tell that wasn’t the case. Sage brush and open patches of dirt dot the northern range, even in parts of the Lamar.

It was dark for most of my drive to the cabin. I had only one notable sighting along the way. A Northeast fox? A moose? Bison stubbornly standing in the road? No, it was an owl! Just out of range of my headlights, it flew off from a snow stake in the eastern Lamar. Likely a Great Horned Owl.

It was hard to believe I managed to get everything ready so that I could get out the door on time Thursday morning, but staying up until 1:30am helped, I suppose.

I had barely left the driveway when I spied two moose bedded in the snow. I looked to the west, and saw two more moose in the willows near the creek. It was still dark, so I didn’t bother with photos. I pulled ahead. A fifth moose appeared back to my right. Pulling onto the highway, I spotted a sixth moose near the creek. It wouldn’t be the last.

In Round Prairie… moose. In the eastern Lamar, two more moose crossed the road. The medium paddles on one of the bulls were the largest I saw all day.

Back in Round Prairie, I snapped photos of bison dots. 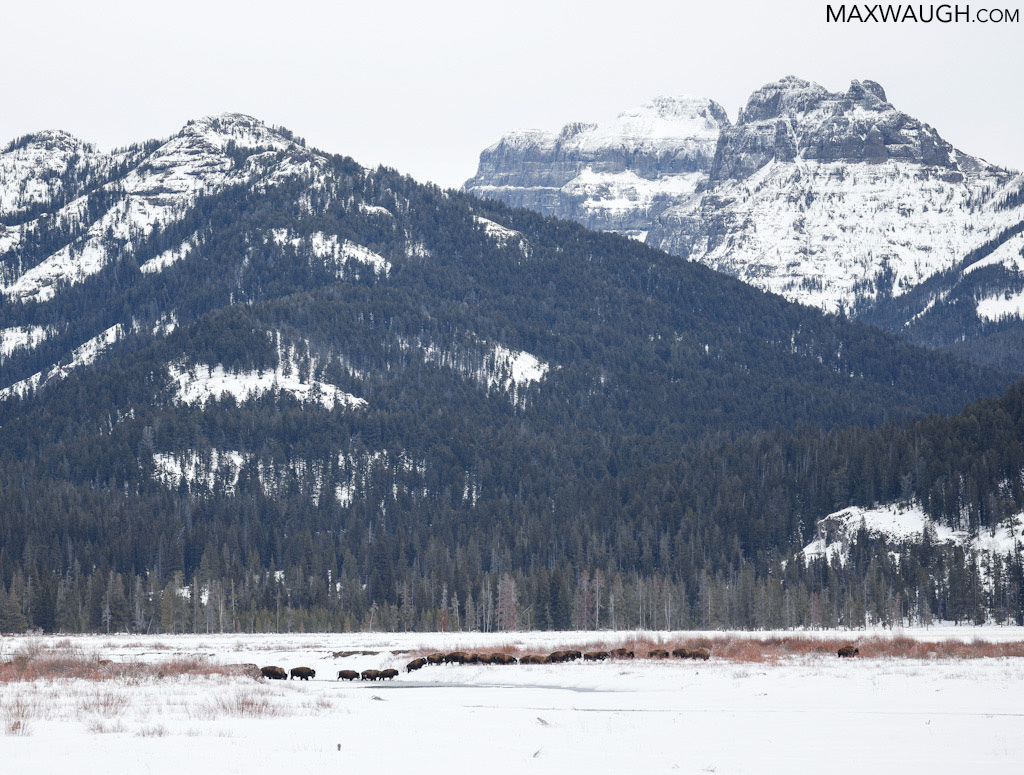 I was eager to find a more dynamic subject, in part because I’m trying out a new camera body on this trip. But moose butts were about it, so I never got much work in. Distant bighorn rams grazed high above the road. I finally snapped my first photos with the new camera… of ravens (there’s a shock). 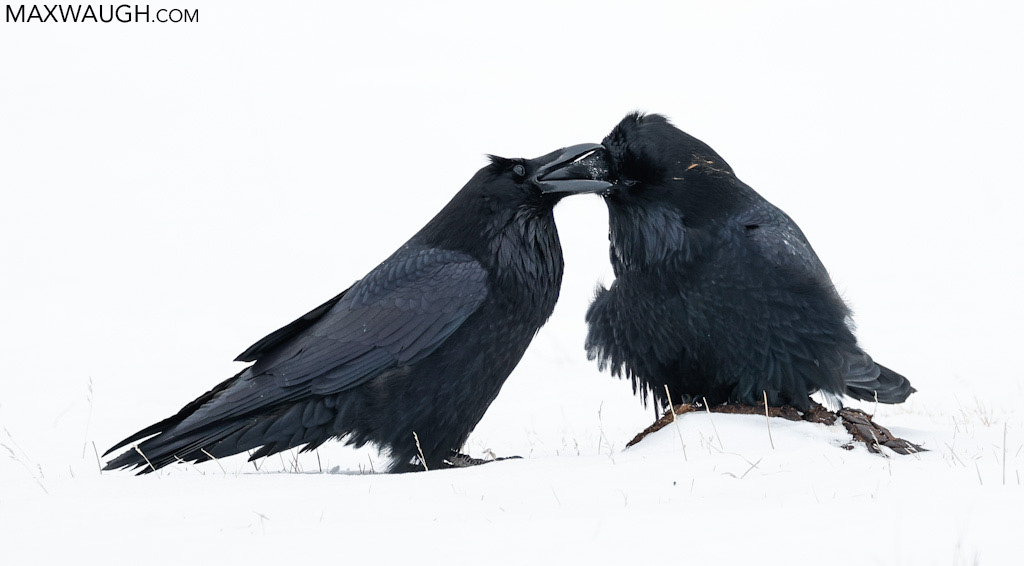 But most of the day was spent aimlessly wandering, and catching up with familiar faces.

It remained overcast most of the day, until the sun finally appeared later in the afternoon. I was on a short walkabout in the woods (fruitless, but peaceful… and the lack of snow certainly made things more navigable) when things cleared up. One final pair of moose, a cow and calf, foraged near Hellroaring. But that was really it. A quiet day to kick things off.

Snow! Maybe about three inches on my car, with more falling as I prepared to head out Friday morning. I didn’t anticipate it would continue in the park, but it was nice to see.

Among the benefits of fresh snow: fresh tracks. Fox tracks stretched for miles from before the northeast gate. The only question was whether they were coming or going. I soon got my answer. Up ahead, a fox was trotting on the road. I passed slowly, hoping to find the next pullout where I could safely get off the slippery pavement.

Unfortunately, this was the longest stretch of road without a pullout in the entire northeast quadrant, so I had to park nearly a mile down the road and wait things out. I didn’t really expect the fox to come all that way, especially after a large truck raced past in its direction, and sure enough, it never appeared.

The sun tried to burn through the low cloud cover in the Lamar, and the snow actually kept falling. I snapped a couple quick photos looking back at the scene… that is falling snow, not the noise from the R6. 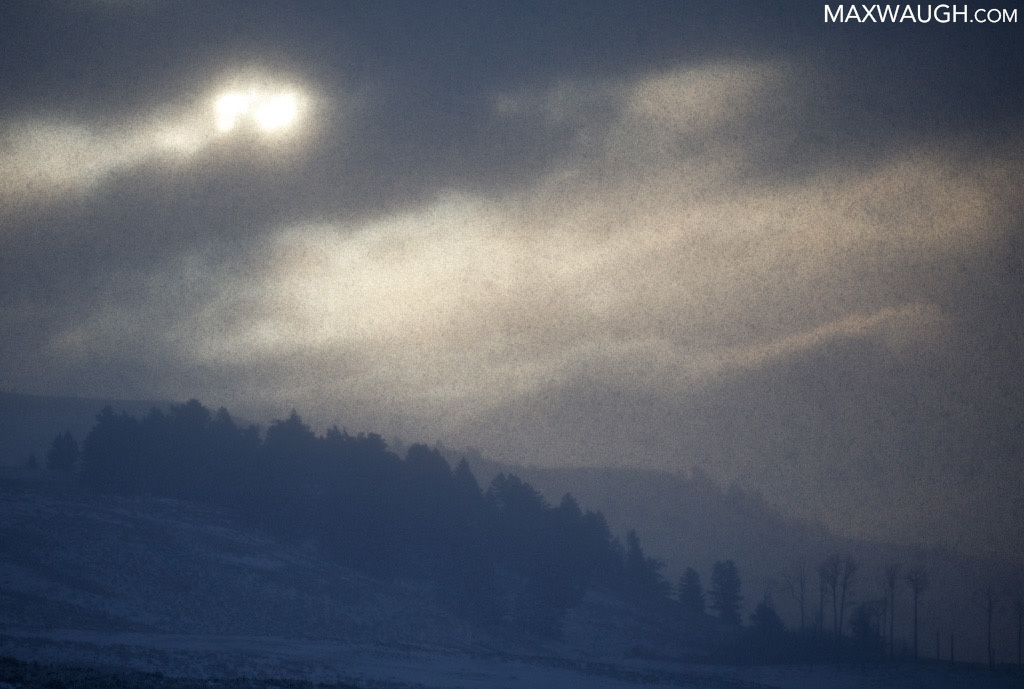 Unfortunately, this was another day in which I rarely touched my cameras. I spent most of the day outside the park, following up on a few leads. Though they may prove to be fruitful, they yielded no sightings today.

It was warm and sunny on the way home, and after checking in with friends, I was pretty confident I didn’t miss much inside the park boundary on Friday either. I did finally see a coyote up close on my way through the Lamar Valley. It took too much interest in my vehicle… hopefully it hasn’t been fed. I snapped a quick shot from the pullout, in part to just test my new R3 body on something. 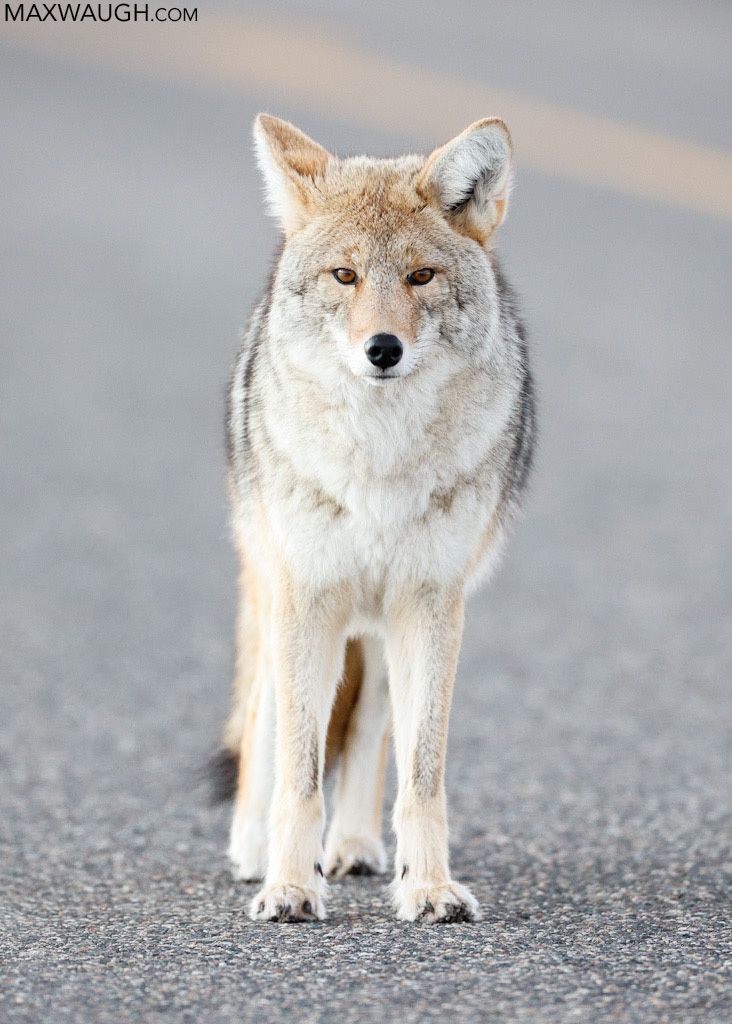 Looking at the detail of this photo, it initially appears that the noise handling is much improved over the R5/R6 I also own… but we’ll see when I get it on the computer at home.

Chilly. The temp had dipped below zero. Which meant we were in for more clear skies, at least. As I stepped out the front door, I was greeted by a young moose, bedded in the snow in our front yard.

Inside the park, it was the same old story on Saturday. A couple of random moose sightings, but little else that drew my attention. I wasn’t sure what to do. I considered heading back out of the park to check on new locations again, but instead I ended up pulling over and walking into the woods. It was cold initially, but I figured a bit of exercise for my bloated, squishy frame would warm things up soon enough.

As is often the case on walkabouts, I put my lack of fitness to the test early on, eschewing well-trodden paths for thick snow, all while hoping to find new meadows or clumps of trees to explore. On the way up, I had company going in the opposite direction. 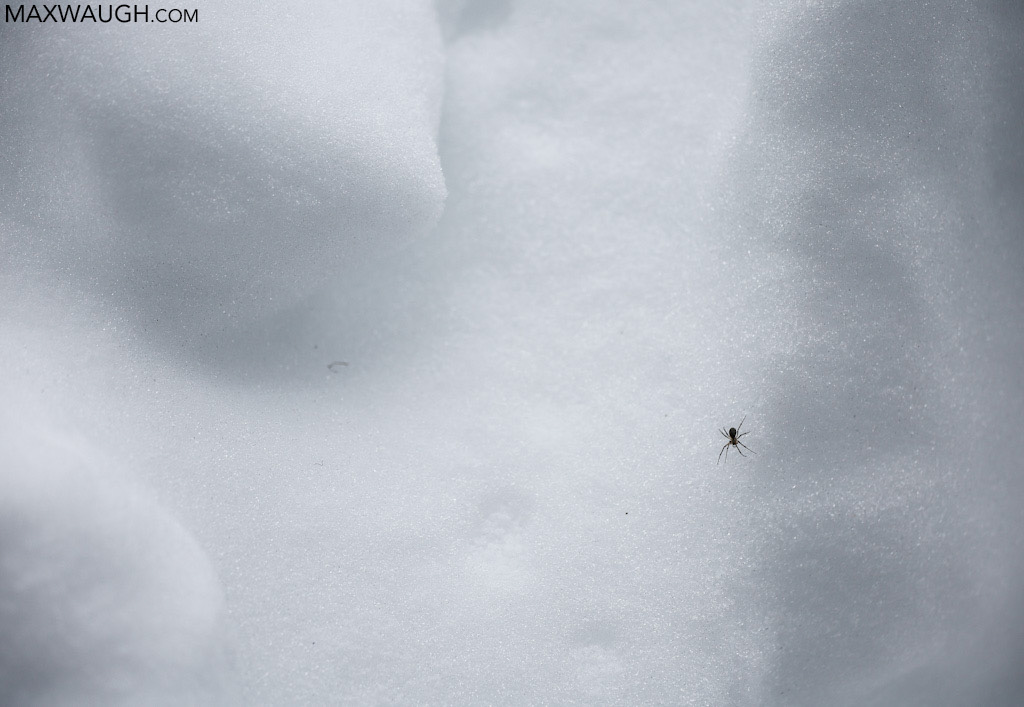 This was literally the most interesting thing I’d photographed in three days. The spider was moving sluggishly, and I couldn’t help but think back to my shoot in the fall of 2020, when I watched birds hunt down spiders crawling over the snow at Gull Point. This one had better pick up the pace, I thought.

I waded through some deep snow, surrounded by ermine tracks. Following a worn game trail, I climbed higher through the trees, cresting the hill and emerging on what was practically bare ground. The lack of snowfall combined with a little wind kept the hilltop clear and made for a much easier commute. From a good 300 yards away, two coyotes spotted me and went scampering over the hills.

As I returned to the car, I paused to study a nearby tree. The bark had been stripped in a familiar pattern, the work of a sapsucker. 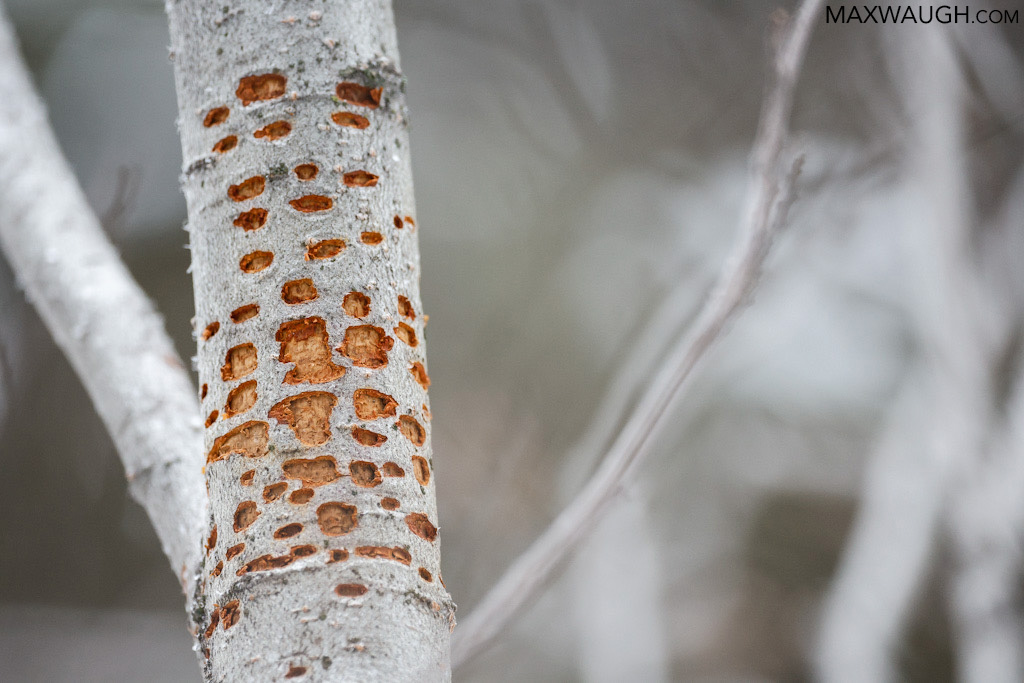 A spider, distant coyotes, and tree bark. The most active 90 minutes of the trip so far!

I ended up in Gardiner, where I’d agreed to meet friends for lunch. Then I had to head for home and start prepping for my first tour. Arriving back in Silver Gate, I checked mail, and while doing so I noticed some vehicles stopped on the highway up ahead. Likely one of the town moose was out.

Three as it turned out: a mom and twin calves (one of which was presumably the one that I saw from our porch in the morning… they were now parallel with our property). 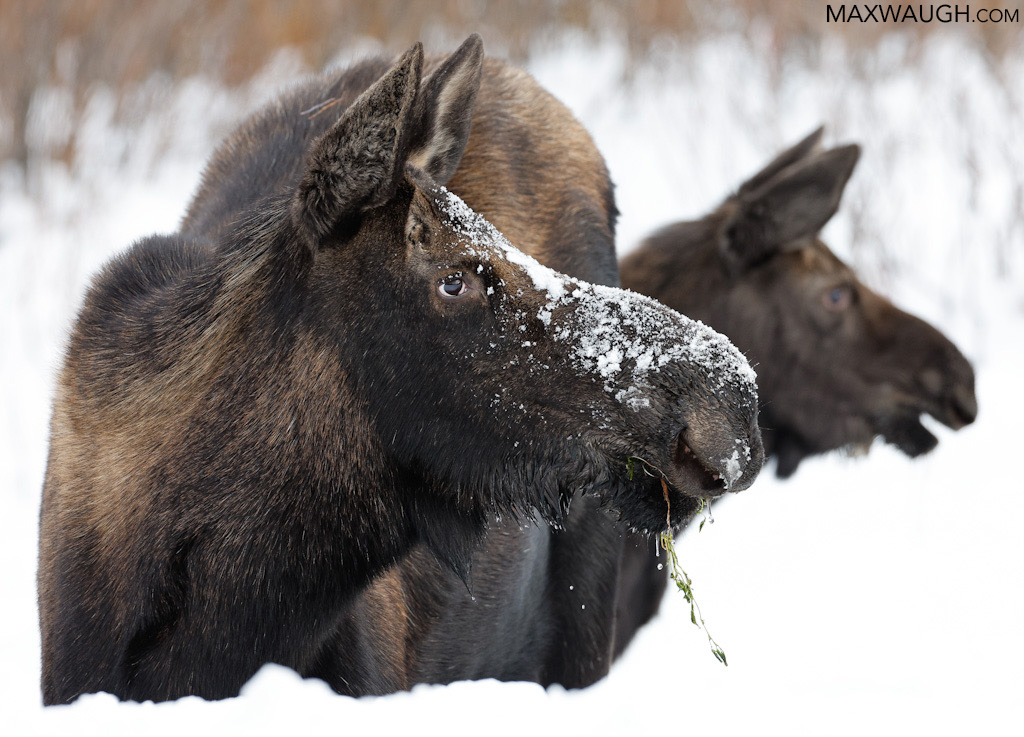 I parked off the road and stayed with my vehicle, choosing not venture too close, despite the fact that my view was often blocked by selfie-takers walking into the road, or a car that idled directly in front of mom, less than ten feet away.

The family eventually wandered away through the willows. Perhaps they’d be back at our place by the time it got dark.

Client Pickup Day is typically uneventful. Of note: a rare coyote on the road in the northeast corner. Typically they avoid that area in winter due to the thick snows, but there hadn’t really been enough winter to dissuade it, I suppose.

The sky was pretty dramatic as I drove away through the Lamar Valley. 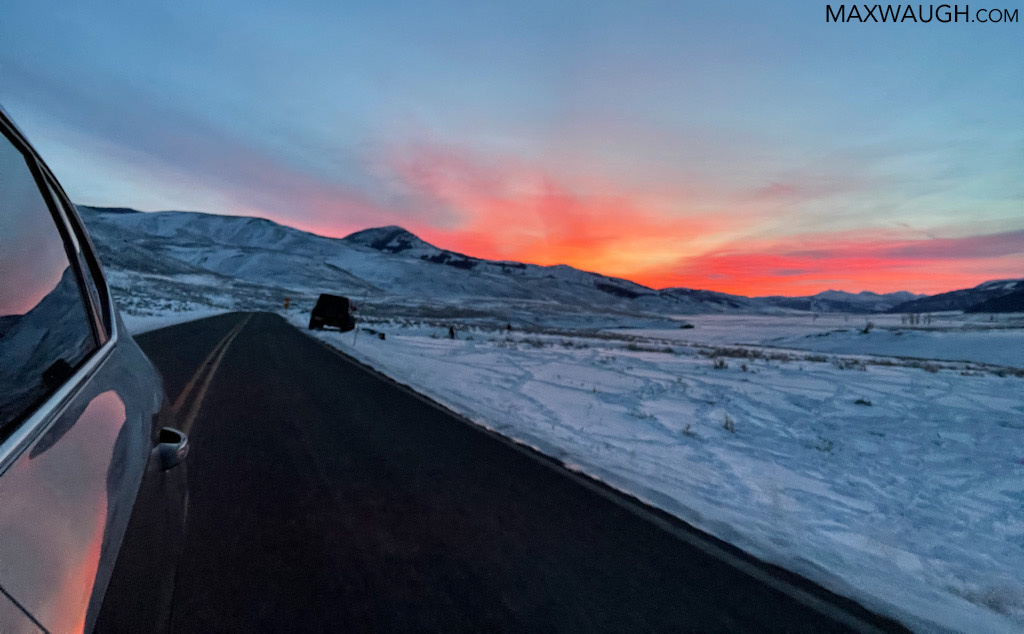 The only other news was that a client’s flight was canceled, and they’re going to try and drive twelve hours today to make it in time for tomorrow’s activities. Dedication! Fingers crossed that they make it in tonight…