She made it! Client April made the 12-hour drive from Seattle following the cancellation of her flight and was with us Monday morning as we kicked off the tour. What a rock star.

I was looking forward to exploring the park interior, which would provide a change of pace in terms of scenery and hopefully wildlife activity from the northern range (though I heard several uncommon sightings occurred up there on Sunday and Monday after I left).

As usual, we tried to get in on the west road first thing in the morning, while it was still dark. We first stopped for moonset, and then for a colorful sunrise, and then some swans in the pre-dawn light. 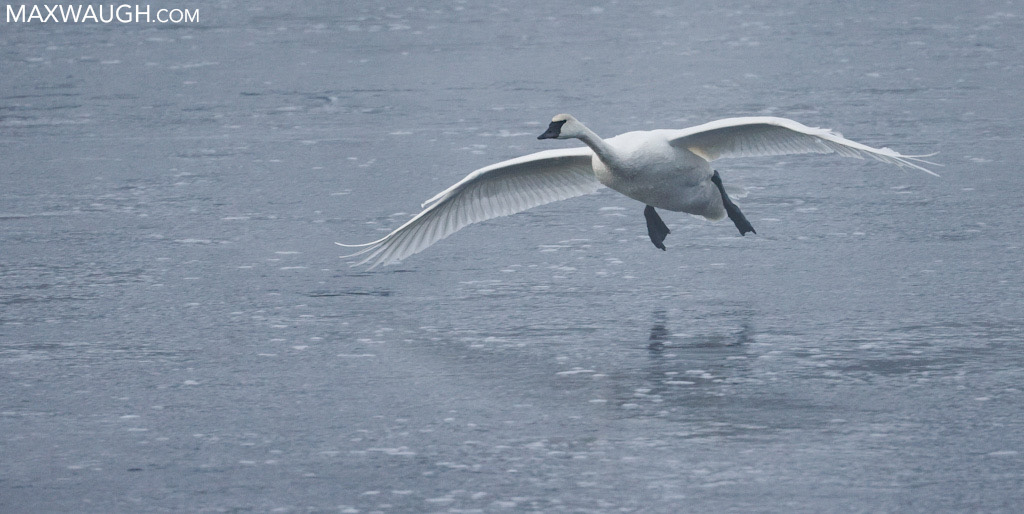 Of course, I was scanning for fresh tracks (especially cat tracks), but with no notable snowfall in recent weeks, that job was a bit tougher.

There were loads of weasel tracks, as well as those left by snowshoe hare, but nothing from the bobcats I have missed down here all these years.

After only one pass along the river, we continued to the Madison warming hut. After that, decisions: north or south. We opted to start with a foray to Hayden Valley. A bisonscape against low fog and sunlit, snowy peaks gave us reason to pause in Gibbon Meadows, but otherwise we made decent time to the east side.

We arrived and went to check the spot that had provided some marten action last year. Loads of tracks, but no critters. I felt our prospects were good and we started plotting a return visit later in the day.

Down into the valley we went. Fresh otter sign along the Yellowstone River, but not too far south, since the river was almost completed covered in snow and frozen over this time. Coyote tracks meandered along the course of the river, but there were no thawed stretches for birds, much less otters.

It was late morning, but the trademark Hayden Valley Fog hung low over some of the rolling hills. On our way south, we did spy a few resting coyotes, some fox tracks along the road, but little else. We were about to bypass the Mud Volcano area when we caught sight of a trio of bison hanging out close to the thermals. Worth a look in case there was some sort of scenic combo of bison and steam that we could photograph.

That possibility didn’t materialize, but I’m always up for a visit to the Dragon’s Mouth. We then pressed on. The Yellowstone remained frozen all the way to LeHardy Rapids. It was the first time I recall seeing the rapids without any thawed patched. Not even Dippers would hang out there.

That was as far south as we could go, so we turned back. With no further distractions, we were approaching lunchtime, which set up perfectly for staking out our marten spot.

We pulled the coach in… and boom! There was a marten.

For many in the group (including our coach driver) it was their first opportunity to photograph martens. What a great way to officially kick off this tour. The mustelid eventually bounded through the pines, so we changed positions, and were grateful when it climbed a tree and posed for a bit. 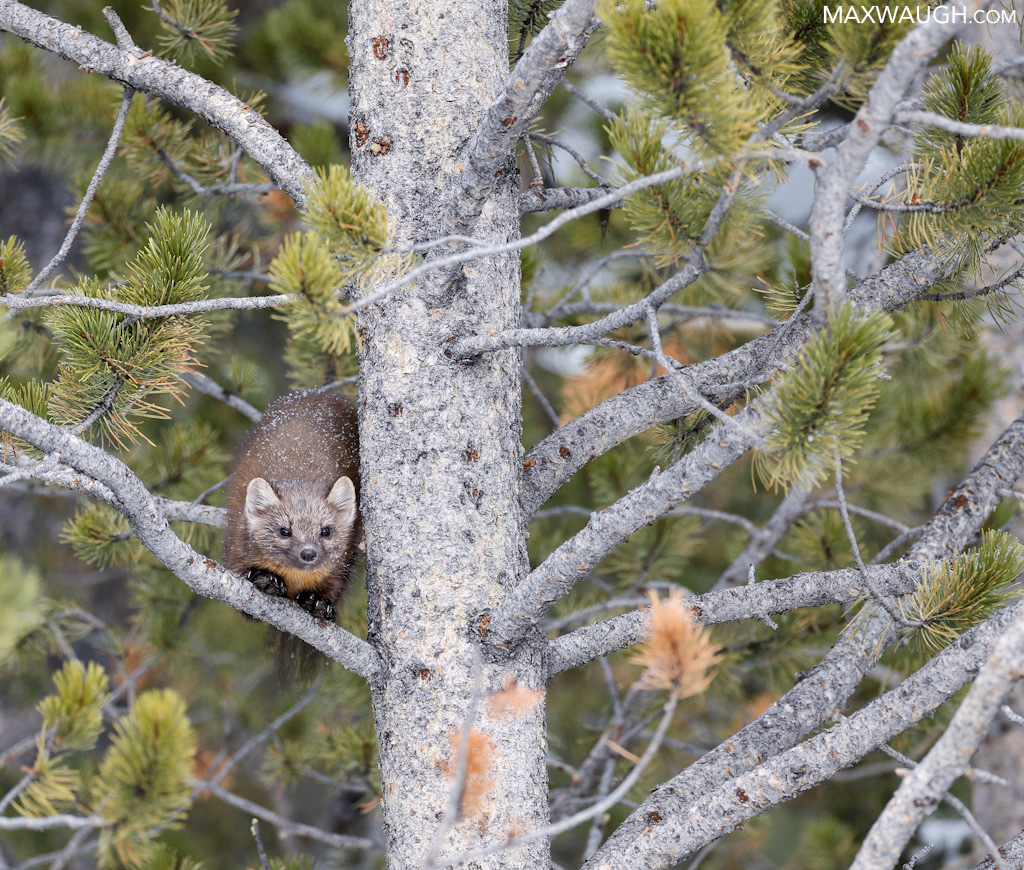 To me, this appeared to be a younger marten, probably different from the ones I saw in the same spot last year. Once it moved on, we eventually returned to the coach and started our lunch… but were interrupted when it returned. Eventually, a second one showed up too.

I officially had a Very Good Sighting tucked under my belt for this trip, and it was certainly a Great Sighting for this tour!

The afternoon return was fairly quiet, unless you enjoy bison jams and roadside coyotes that don’t pause for photos. By the time we made it back to the Madison, it was already getting a bit dark (helped in part by the cloudy skies), so our chances for a weasel sighting seemed to have passed. We’d try again on Tuesday!

We did not see a weasel on Tuesday. Disappointing day? Not exactly…

It was mostly overcast as we drove into the park. There wasn’t much action on the Madison, but I did find some cat tracks. Were they fresh? Hard to tell. Though they did look crisp, many tracks have been preserved pretty well due to a lack of fresh snow. It was nice to know a cat is around, but I’d end up going another day without seeing one down here.

On Monday we turned north at the junction. Tuesday we went south. In part for a change of scenery… in part due to rumored wolf activity. The cloud cover lingered, and I was really hoping to hit certain points south in sunnier conditions. So we used Fountain Paint Pots as an excuse to take our time and let the skies clear a bit. And guess what? There was wildlife at the thermal basin… a thermophilic spider! 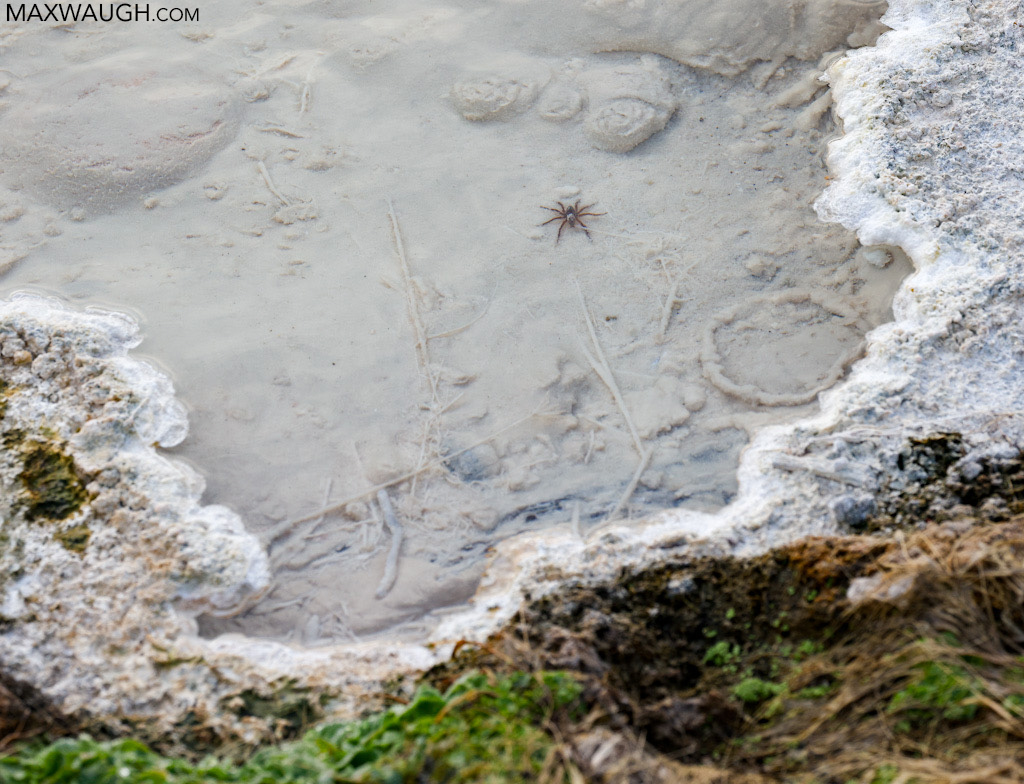 Yeah, another winter spider shot. Pretty exciting for me, actually, as I’ve seen these creatures featured in documentaries (they feed on the insects and parasites found in thermal runoff), but had never photographed one before. It was actually rather large… related to a wolf spider, perhaps?

After snapping photos of boiling mud, we returned to our coach and continued south a short ways to the Bobbysocks trees. It’s always a favorite stop—well, for a landscape location—during my winter visits here. We didn’t have much sun, however. It gave us fewer options to play with, photographically speaking… no shadows and little contrast. But it was still nice to experiment a bit behind the lens.

Yes, all these distractions and delays happen for a reason. We found our reason soon enough. What appeared to be a herd of bison on a plateau opposite the road quickly morphed into smaller, blacker animals… wolves!

Without going into too much detail, I’ll just say that what followed was a top-three wolf encounter on my tours: wolves howling, running together, walking through steamy thermal areas, crossing the road… the variety of scenes that unfolded before us over the next couple hours was remarkable! 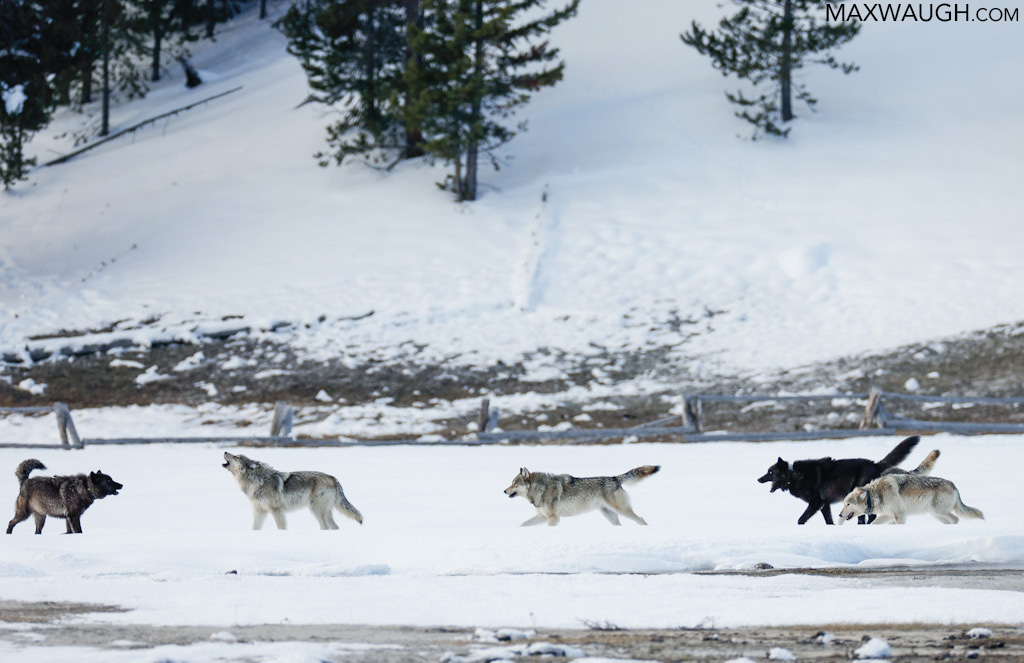 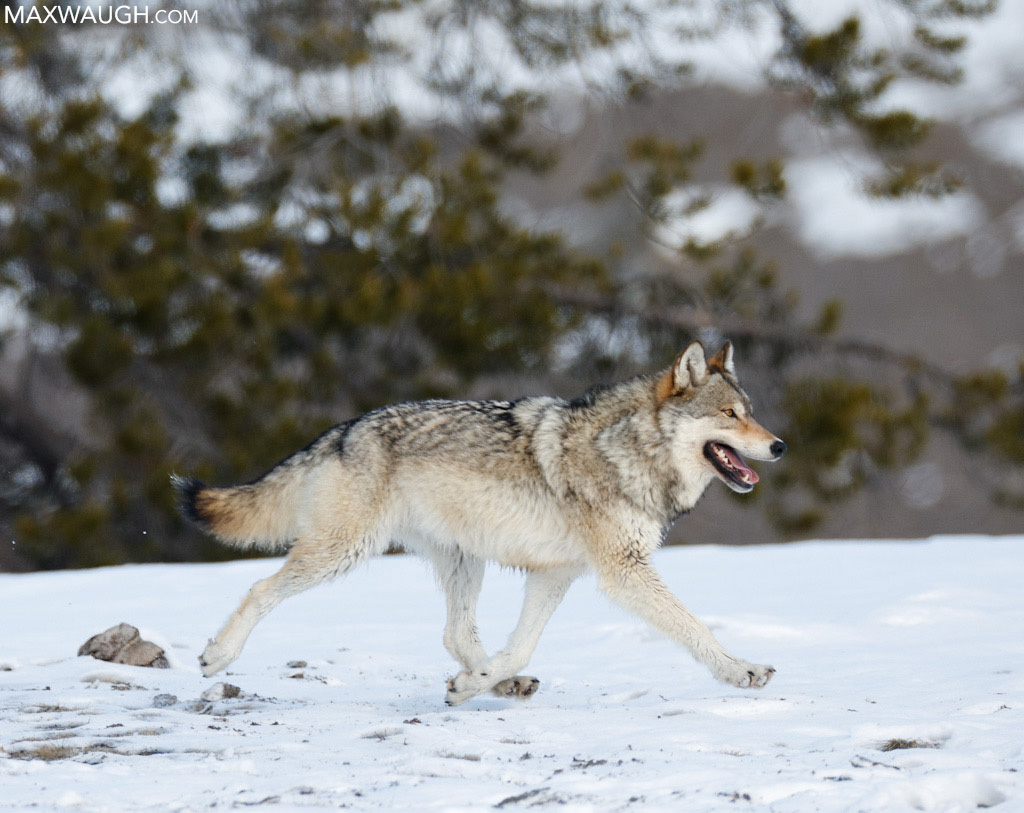 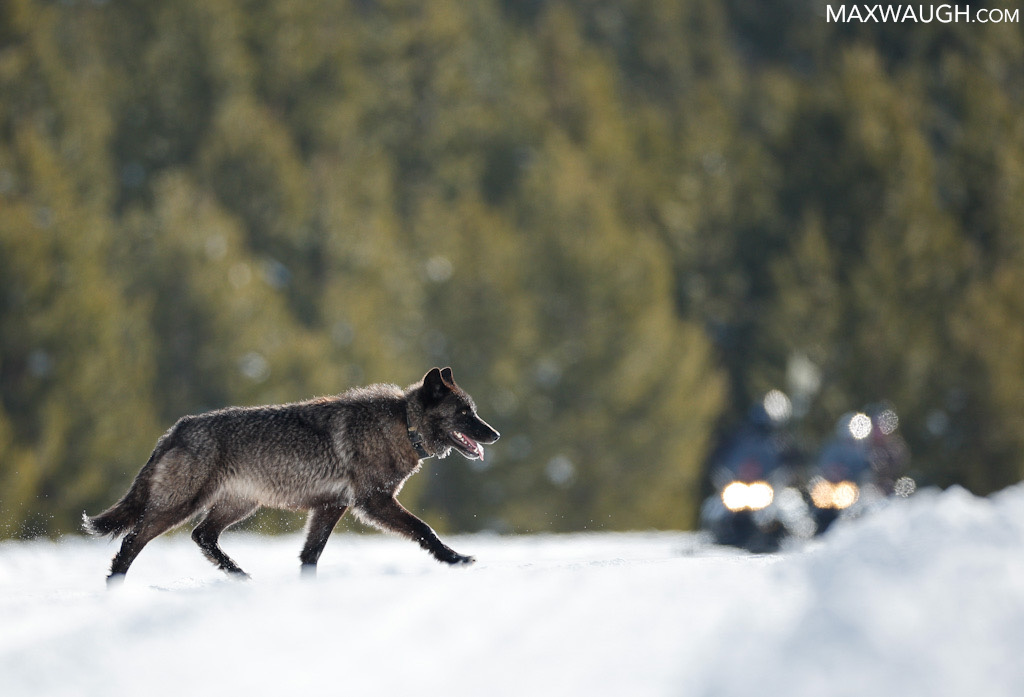 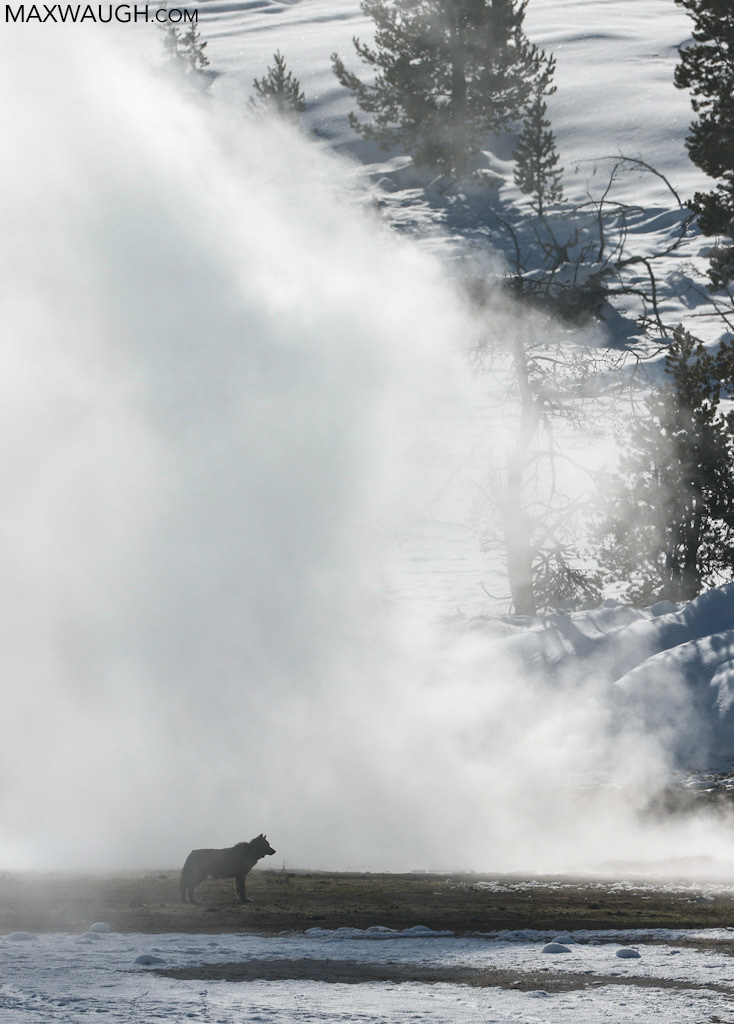 Afterward, I declared the tour over. May as well end on a high note!

That actually wasn’t quite everything for the day. We had a nice raven shoot while waiting for the wolves to reappear at one point. 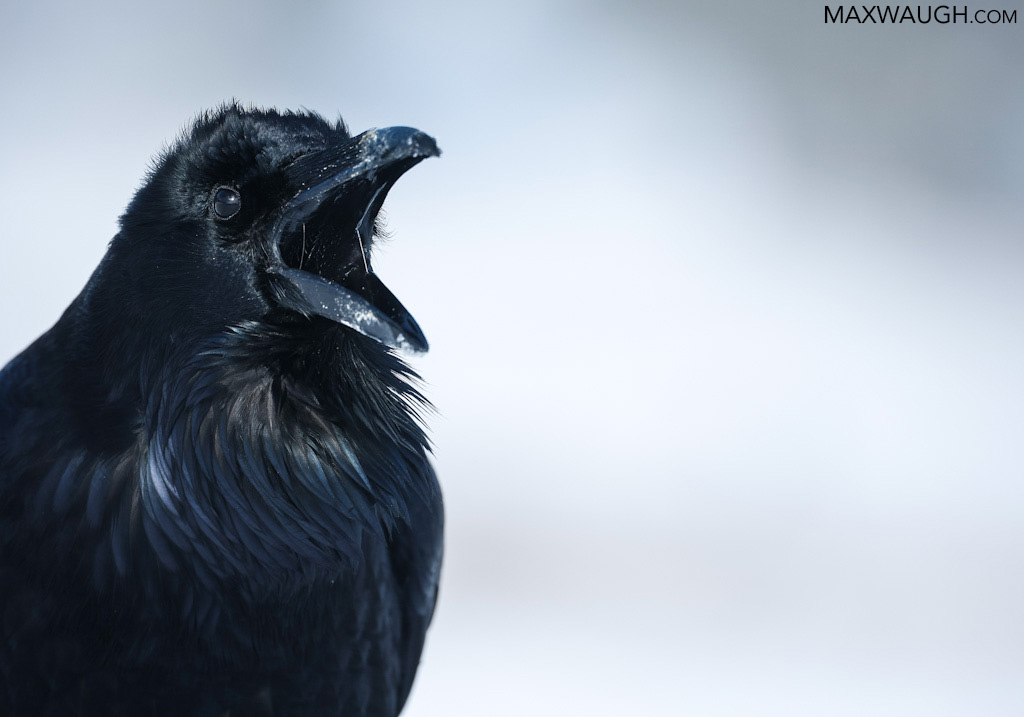 In the Firehole Canyon Drive, we actually found wildlife to photograph, a Clark’s Nutcracker digging up food along a green and wet thawed stretch of ground above the road. And then we capped things off with perhaps the most unexpected sighting of the day: a cottontail rabbit! 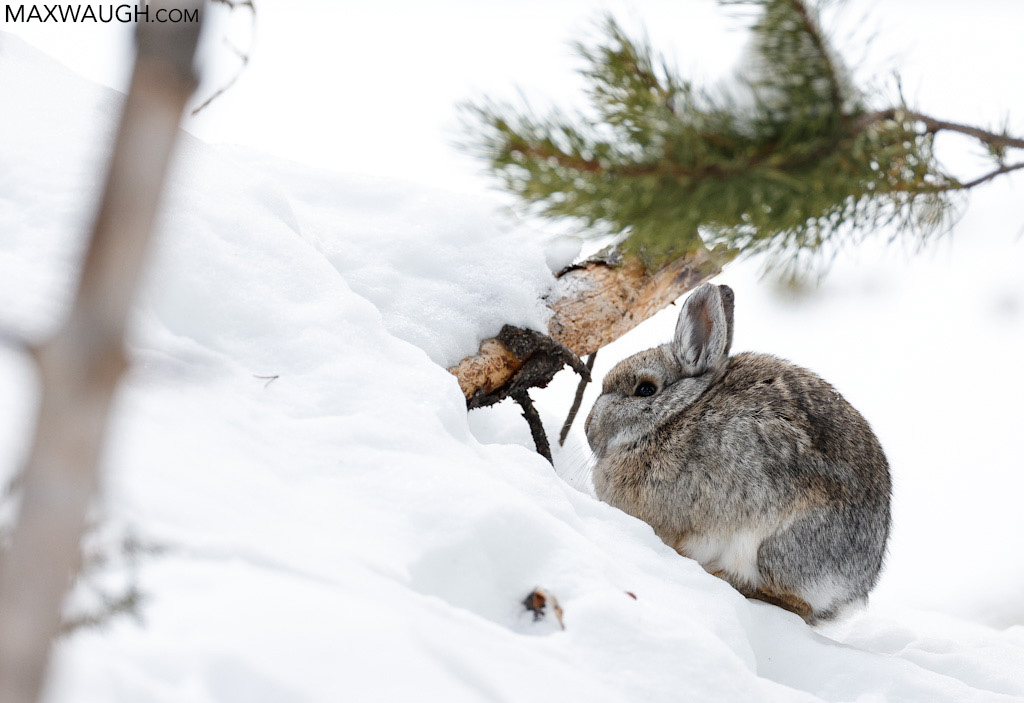 Cottontails are pretty common in the northwest corner of the park, but to see one in the interior totally caught me by surprise. I continue to hope for a good snowshoe hare encounter, but I didn’t anticipate its smaller cousin. Of all the stuff we’ve seen so far (yes, even the spiders), the rabbit has been the least expected subject so far.

Our final day in the interior was our mellowest (and shortest, since we had to get back in time for the evening drive to Gardiner), but it was still fun.

We buzzed along the Madison pretty quickly, and will little activity found we’d have time to check points both north and south before our afternoon deadline. So we headed to see about our wolf spots from the previous day.

All quiet on the canid front, but on the way back we did have a couple opportunities to stop for some bison on the road. 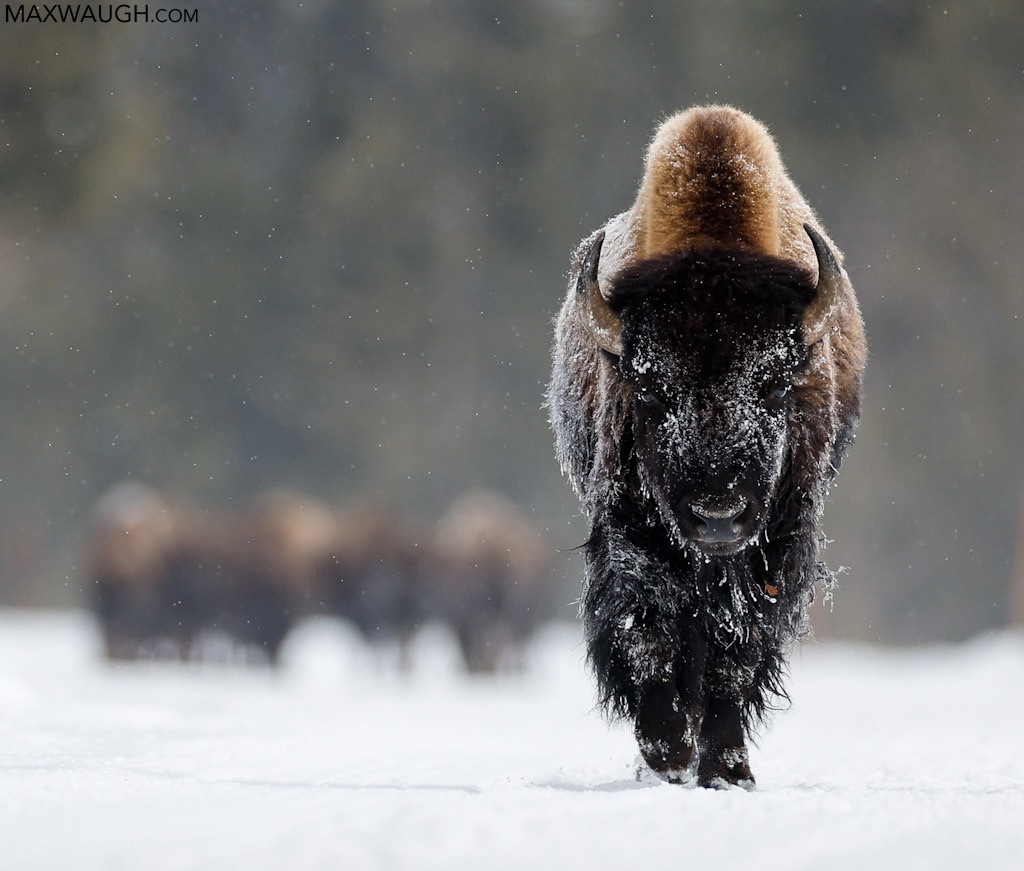 Up and around Norris, over to Canyon. No martens today, so we cruised toward Hayden. A stop at Chittenden Bridge revealed that otters had been active since our visit two days prior. I was busy photographing slide marks and tracks in the snow from above when I spied a dipper on the edge of the ice. Hey, wildlife!

We actually spent a good twenty to thirty minutes photographing this small bird. How often do you get a chance to photograph a dipper from above??? 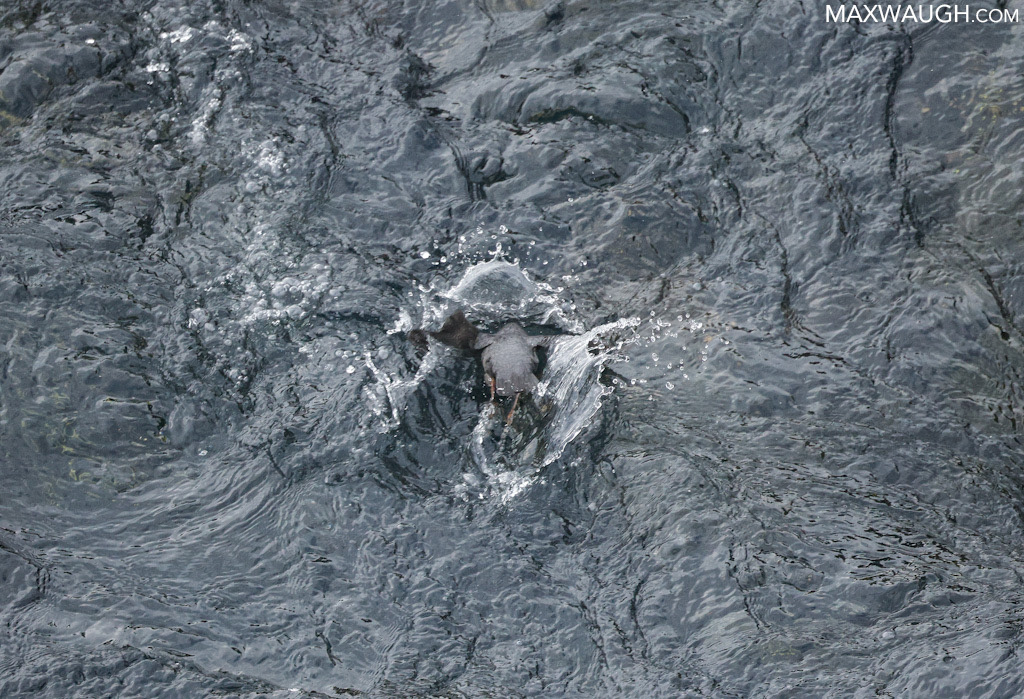 Down in Hayden Valley, we spotted the pair of coyotes we’d seen at Alum Creek on Monday. I’m pretty sure one of them had been bedded in the same spot for two straight days.

They were a bit far, but as we drove past, we spotted an otter in the water just below a coyote’s perch on the bank. The otter slid under the ice and vanished. Worth pulling over for and waiting out… but sadly, it never re-emerged, likely tucked away in a cozy den. A Bald Eagle provided momentary excitement by flying overhead, but it didn’t make up for our lack of otter.

To the south, more coyotes. One came out on the road about a hundred yards ahead of us, crossing over to the river. We pulled ahead to a pullout, and eventually saw a second coyote. This one had spied the first, and actually came in our direction. It paused to watch some swans fly past. 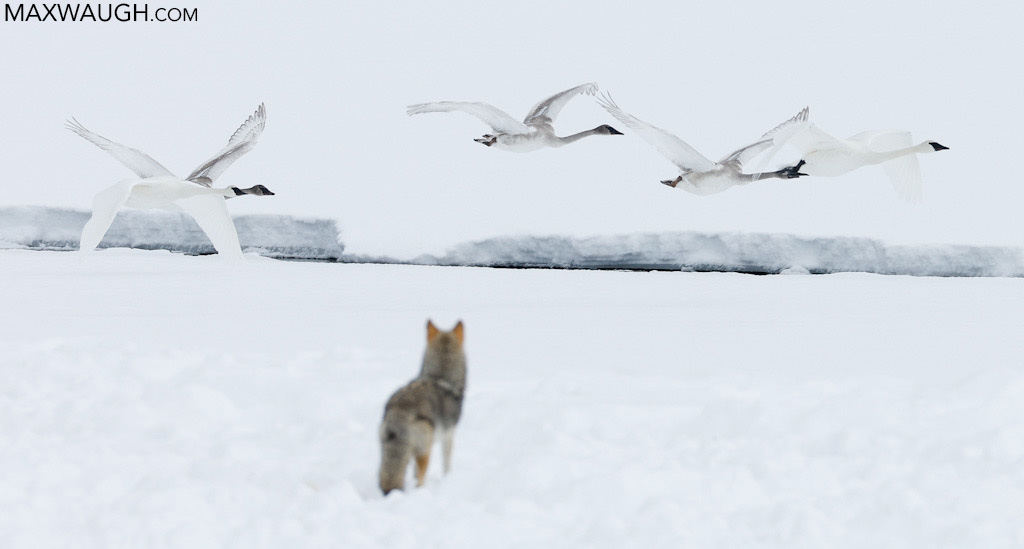 After the first coyote ascended the far hillside, the second returned to the river bed, so we never quite got either one at close range.

We returned to Canyon hoping another lunch time stakeout would produce marten sightings again. It wasn’t to be. Time to head back to West Yellowstone.

The remaining drive was quiet, and we exited the park, packed the vehicle, said goodbye to our excellent coach driver and guide, Rylee (with whom I’ll work again next week, hopefully), and began the three hour trek to Gardiner. We arrived in darkness, avoiding a few roadside elk in the final stretch, and settled in for northern range exploration, which starts Thursday.