I returned to the northern range for the second half of the tour. The north, of course, had offered up hardly anything of note prior to my tour, then exploded with a string of unusual sightings once I left. Now that I was back, what would happen?

A mix of both, as it turns out.

We traveled all the way to the northeast, stopping briefly for a colorful sunrise on the way… 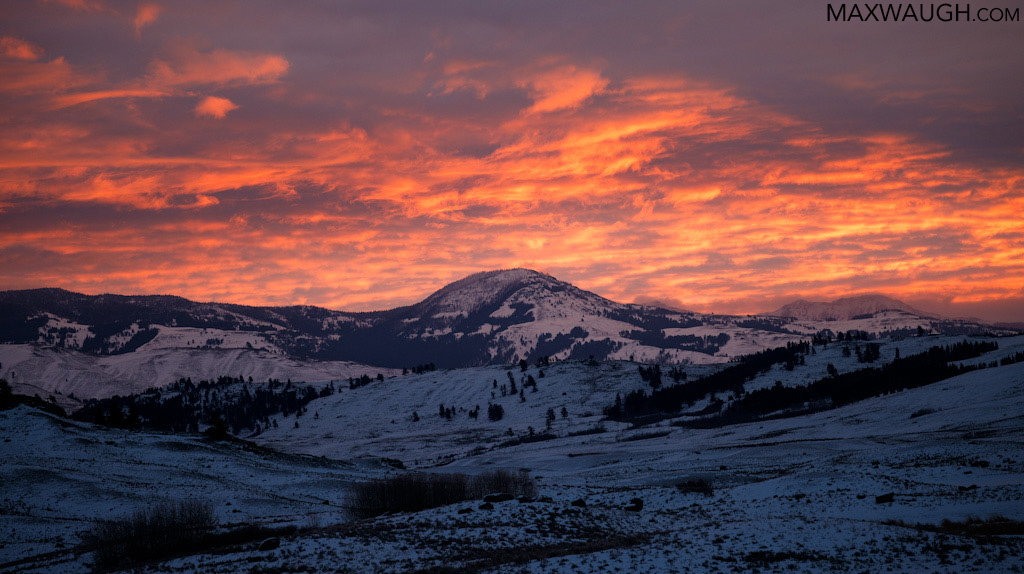 …before getting a brief glimpse of a black wolf in the distance, and then pausing to snap a few photos of a few moose in Round Prairie.

At Pebble Creek we inspected a carcass, which at that moment was only drawing the attention of ravens, a Golden Eagle, and humans. A return to the west was uneventful, so I chose to pull over and show my guests the black bear den that had been occupied in the fall. No bears were visible, but just as we were pulling out, a raven arrived. It was snowing, there were some nice silhouettes in the distance… so we hung out for a while and had a raven shoot. 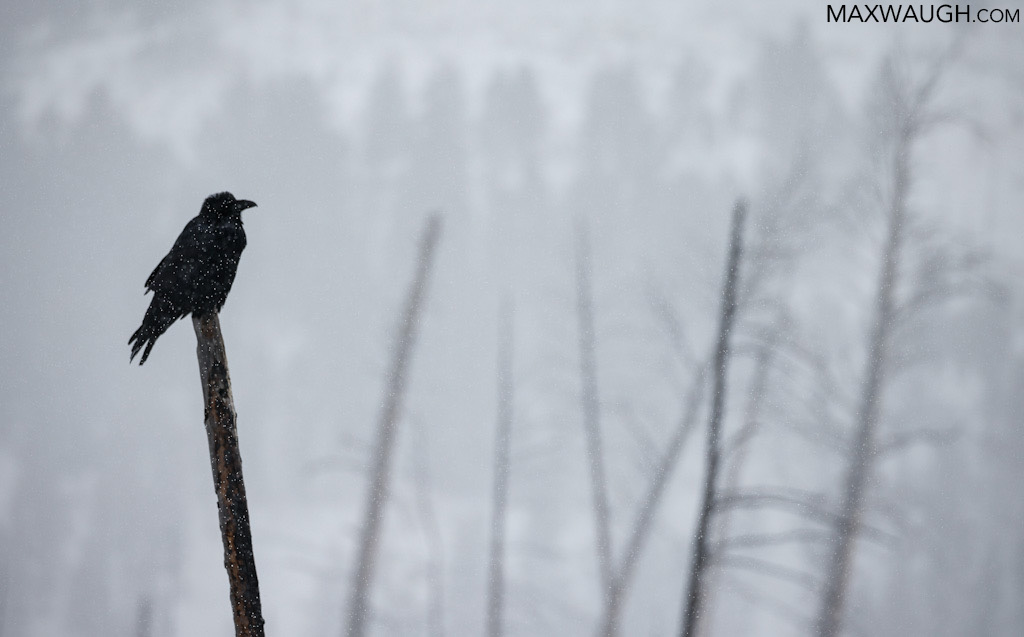 Soon after, we learned that our raven shoot may have cost us one of those ultimate sightings: a rare bobcat had emerged to the east, yielded numerous photo ops for those on hand, and then wandered away. Lynx rufus continues to avoid my camera in Yellowstone (still stuck on three park sightings, no usable photos). It may have launched this trip into the pantheon of all-time winter visits. Instead, we’d have to make up for it in other ways.

We did have a rare sighting though! Back at the carcass, an unusual bird was perched in a nearby tree. It had a ton of white showing on its breast… a leucistic bald eagle! 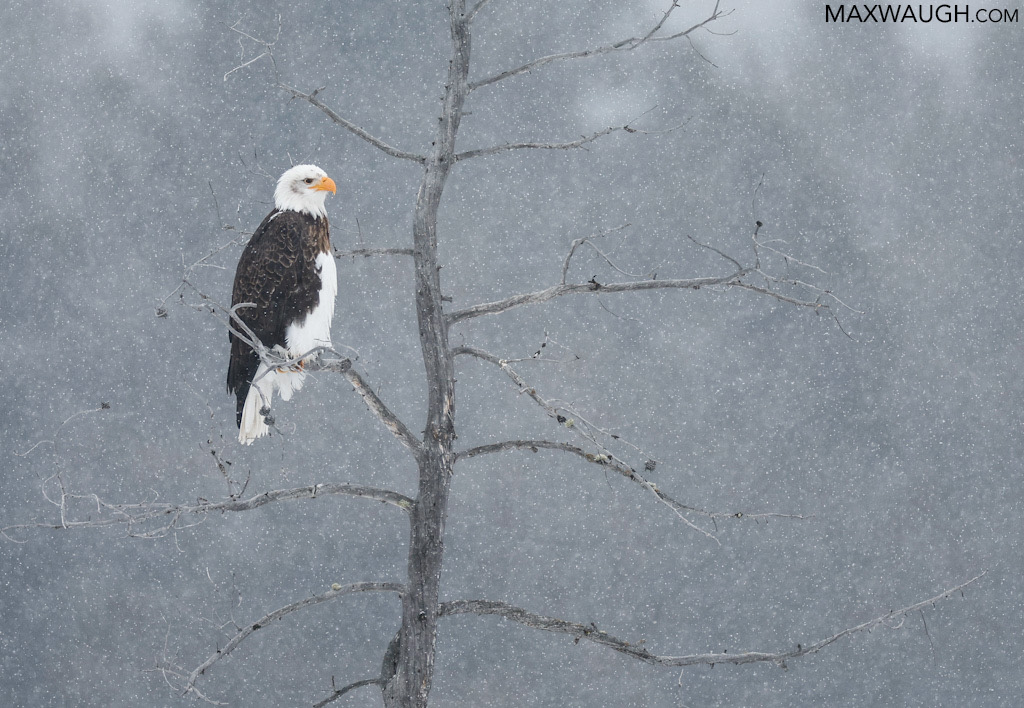 This was a first for just about everyone. In my case, I’ve seen a leucistic Baldy before, but that bird had caramel-colored brown plumage, rather than the stark white belly (and one wing feather) of this Piebald Eagle. Really cool to see. 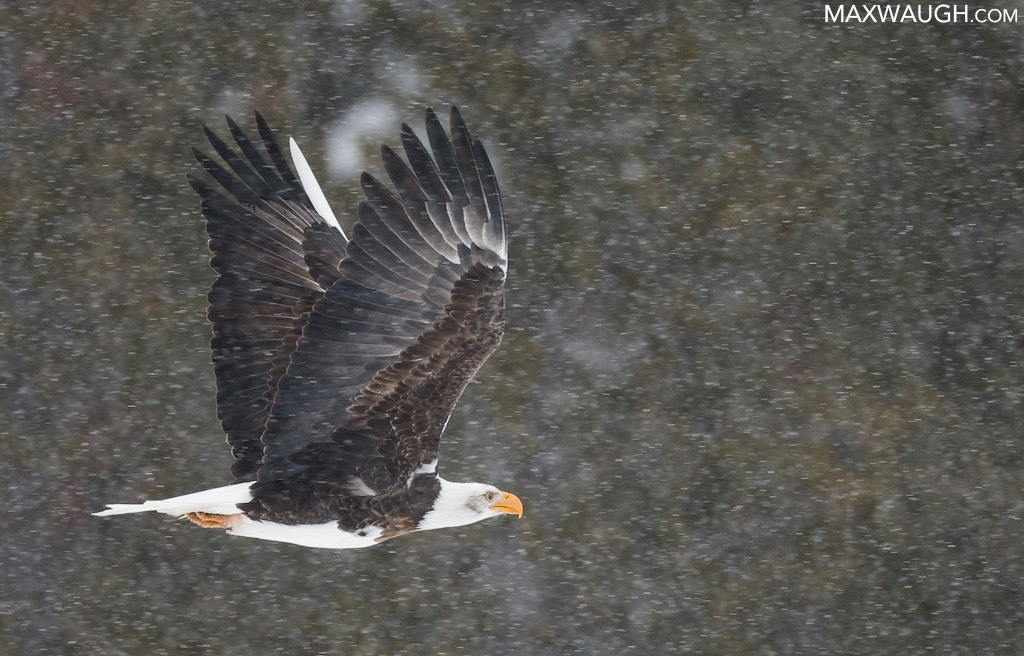 After that, we drove to Silver Gate, and warmed up with lunch at my cabin. No moose paid us a visit, sadly.

Following lunch, we checked up toward Cooke City (no moose there either) before returning to the park. The Piebald was near the carcass, but father away. Bighorn sheep remained too high up in the eastern Lamar. We drove all the way out through the Arch and checked the Boundary Road before dark. A few pronghorn scattered here and there, and the bighorn herd had gone high up the slope, so there were no more pictures to be had.

Fresh snow in Gardiner! So that meant more fresh snow in the park and, perhaps, some fresh tracks.

It was a quiet drive eastward until we passed some wolf watchers… and then saw what they were watching. High on the southern slope were many, many wolves. 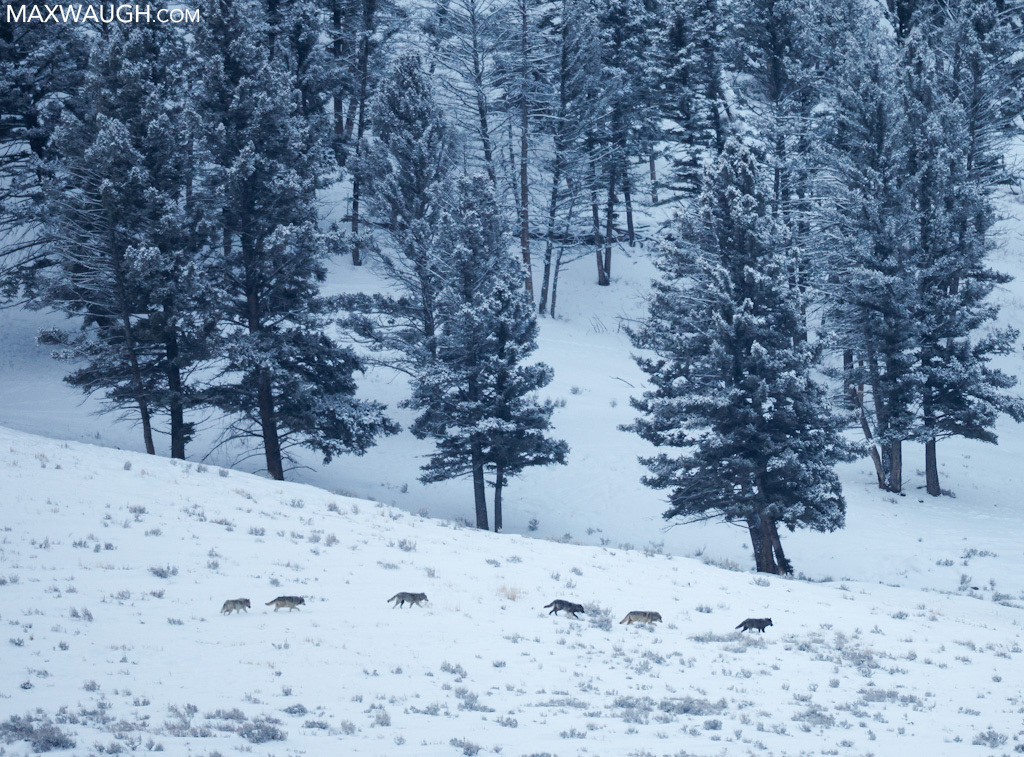 I counted fifteen. Others claimed sixteen or seventeen. Perhaps they started at seventeen and a couple were “harvested” in the fifteen minutes or so between counts. It seems like they’re disappearing that quickly around the park these days…

We checked on the bobcat site from Thursday, but found no fresh tracks. Out toward Pebble Creek, the bachelor herd of moose was foraging near the road. My clients had a nice session while I looked for parking. As I circled, the moose headed my way, and I had to pause as a couple of them went toward the road. 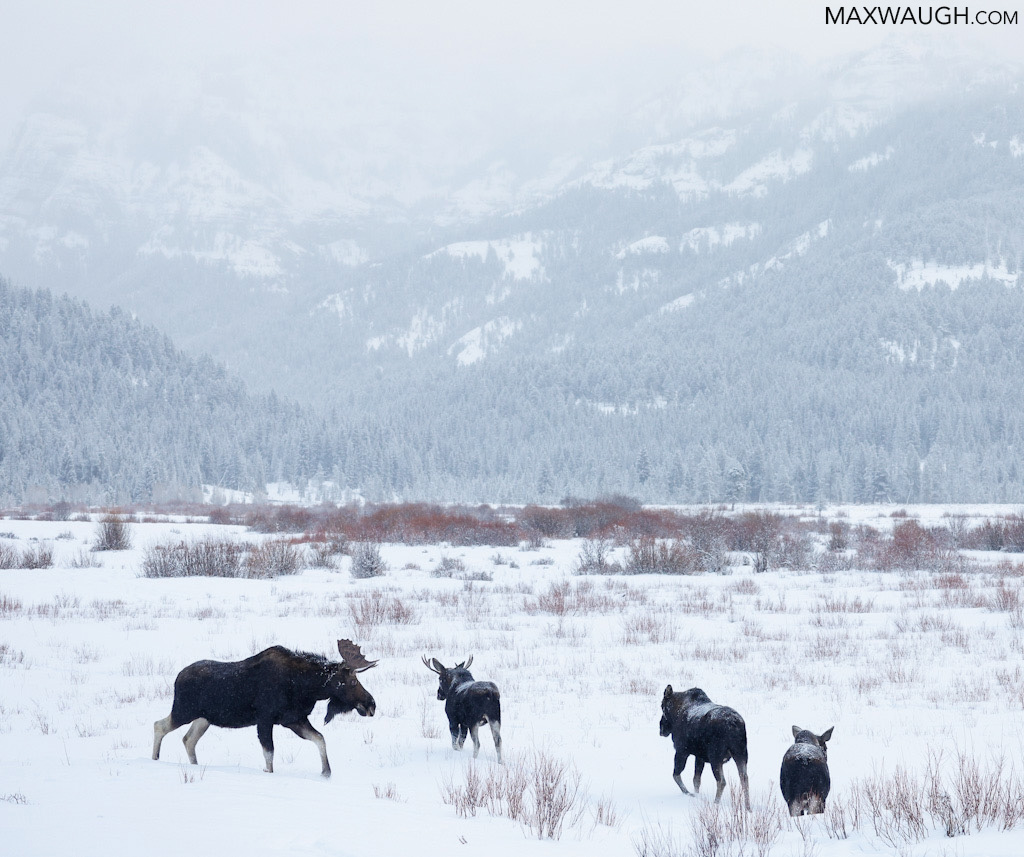 Later in the morning, we spied the leucistic eagle again (this time in the Lamar Valley). We had occasional sightings of coyote pairs here and there, plus a nice one posing in sunlight near the road. Even a raven occupied our attention for a short while, and in the afternoon the clients spent a short time photographing a bighorn sunning himself on a high bluff. On our way home, the group finally got a look at some impressive bull elk.

Overall, it was a slow day. We continue to search for signs of fox and ermine (and bobcat, of course, even if that’s a bit of a reach), but have struck out so far. One more day on this tour… hopefully we can close as strongly as we started!

As my first photo tour comes to a close, I’ve spent some time thinking about what we’ve experienced together, and what makes for a “successful” tour.

The week we shared might be described as inconsistent or uneven by some, with some major highs countered by slow stretches, and the occasional small rarity sprinkled in along the way. That’s a fair assessment. After all, the rhythm of every tour I lead here is different. Some weeks, especially in winter, may proceed a bit more subtly. Other times, our experiences over the course of five to six park days can be drowned out by some wild and memorable encounters (this week’s martens and wolves are a prime example).

One thing that remains consistent, however, is the relationship built in and out of the vehicle. The bond formed between myself and my clients, and among the clients themselves (folks who are often forced to share a cramped space for many hours, often with complete strangers) carries a tour from start to finish regardless of the actual activity we’re experiencing outside of the vehicle.

I’ve been incredibly fortunate over the years to host groups who come together based on an initial shared interest, and then bond over both the memorable moments and the many, many more in-between moments. Together we’re able to create a fun atmosphere that sustains the energy even when the animals in the park are choosing not to expend their own energy to become visible for us.

This week’s tour was no exception. Our final days slowed considerably since our quick start, but we carried through to the finish line in good spirits. I’m grateful to this group—April, Chris, Jenny, and Steve—for helping foster such a great atmosphere all week long.

So yeah, today was slow. Cold (-8F) and quiet. But we had a lovely end to the day and the tour. 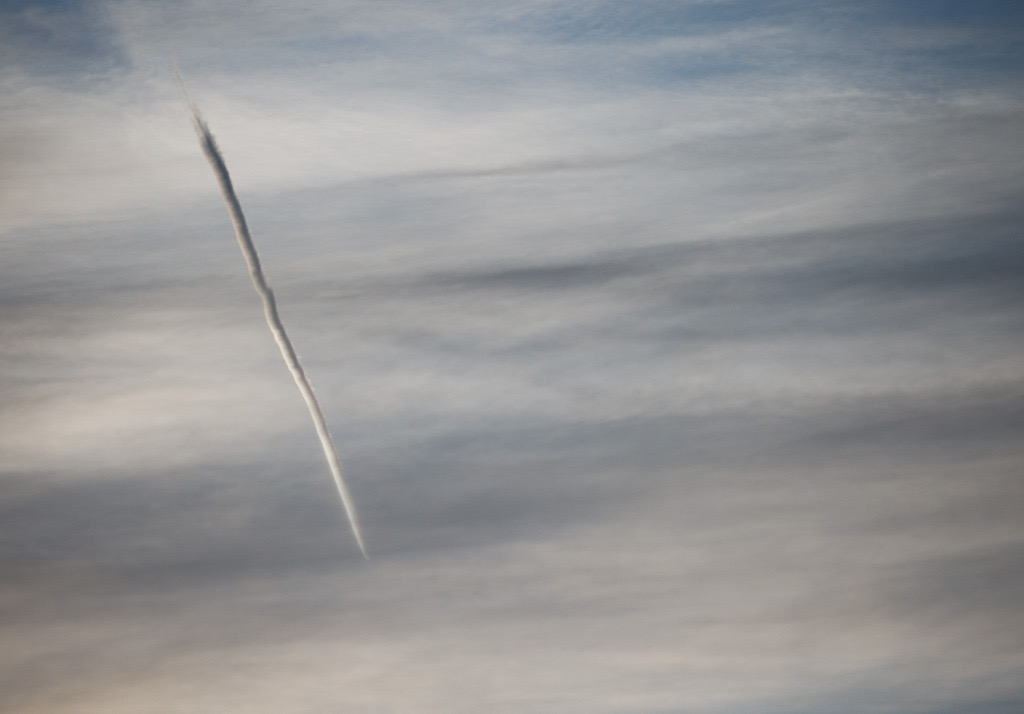 A contrail spoiled an otherwise wonderful sky on a frosty morning in the Lamar. 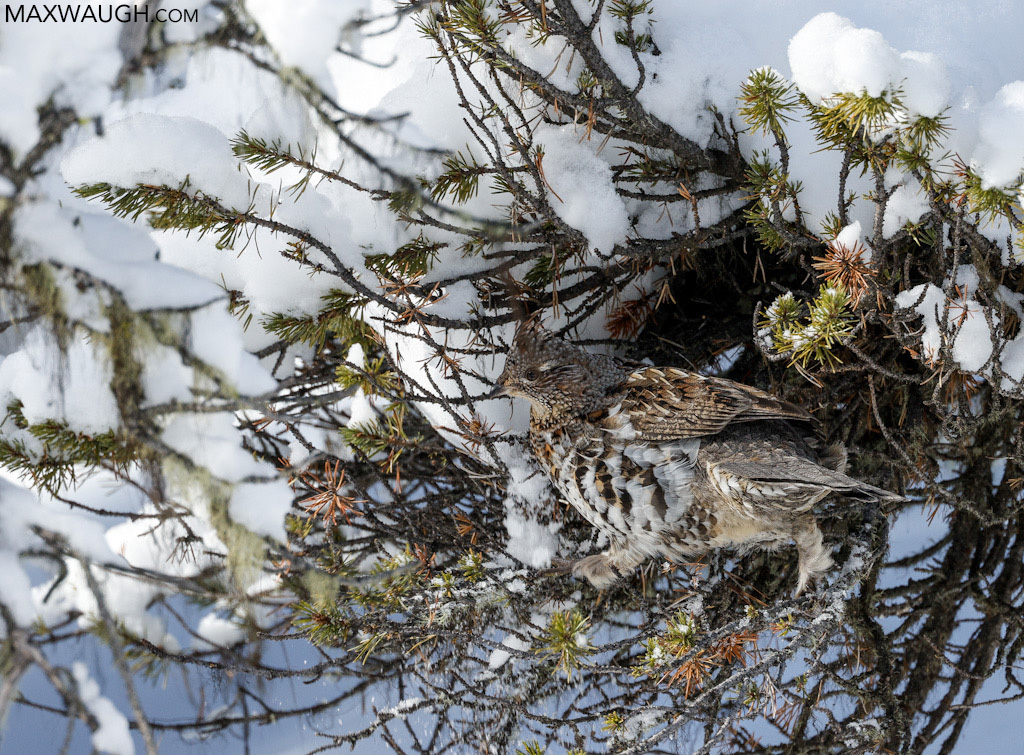 The wildlife highlight of the day… a Ruffed Grouse. 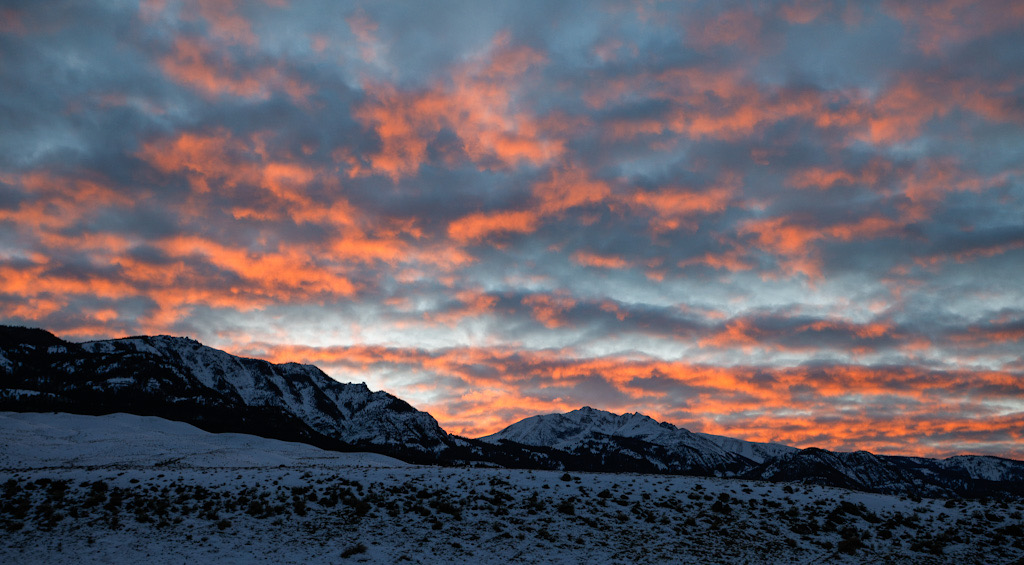 Our final sunset echoed our first sunrise in the north.

On Sunday, I quickly swap groups, and then I’ll head south again. Back to the interior for the start of the second tour!