Sunday was a transition day. With my first tour all wrapped up…

Wait, what’s that? The first tour wasn’t over?

Sunday was the day I was supposed to ferry my remaining clients back to Bozeman (April took off early for the long drive home to Seattle). And we did pack everything and leave Gardiner on time. And we did drive away from Yellowstone as the sun shone brightly on the Arch and the rolling hills to the south and east.

Oh, and I did spy otters in the Yellowstone River about ten miles outside of town!

So I guess there was time for one last shoot. I found a safe place to pull off the highway, and we were able to walk down to a viewpoint while avoiding encroaching on any private land. Though we were a ways away, it was wonderful to have an open view as the otters scratched, played and sunned themselves on the ice. 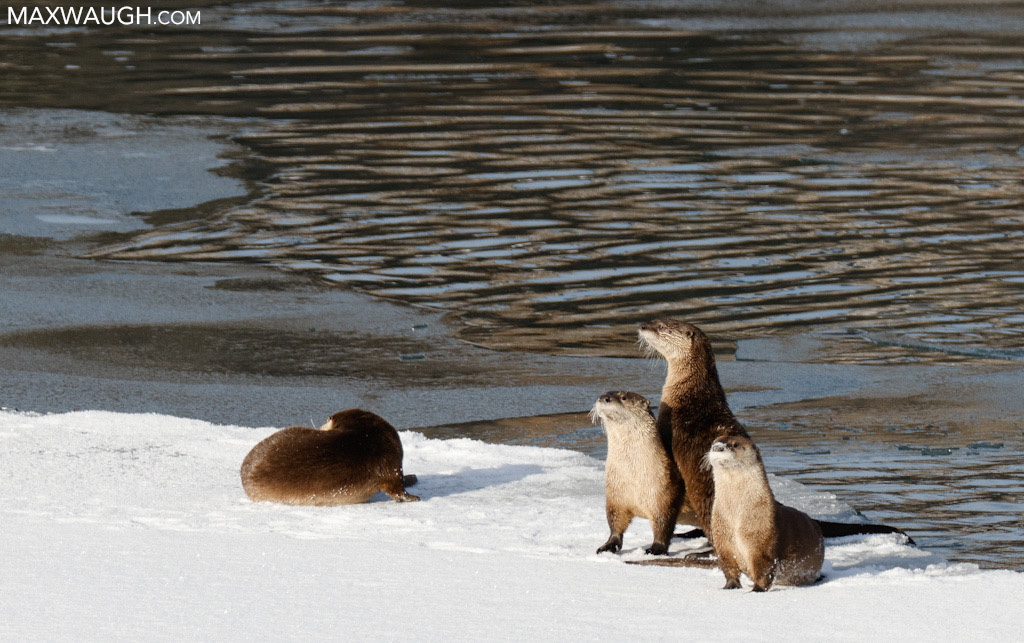 Now that was truly a great way to end the tour. A short while later, we said our goodbyes, I ran a few errands, and then went to meet up with my next group. Normally I’d have a day in between tours, but this year I have to throw myself right back into the fire (if that’s what you want to call fun times exploring a magical place like Yellowstone in the winter).

On Monday, we were slated to kick things off in the interior. Fingers were crossed for a repeat (or something exceeding) last week’s action!

We went into Day One of this tour with one main goal: to check on wolf activity in the Yellowstone interior. Action has continued since the incredible moments I shared with my group last week, so we hoped the second group would enjoy similar luck. On our way in, we stopped to capture the sun burning through early morning steam and fog. 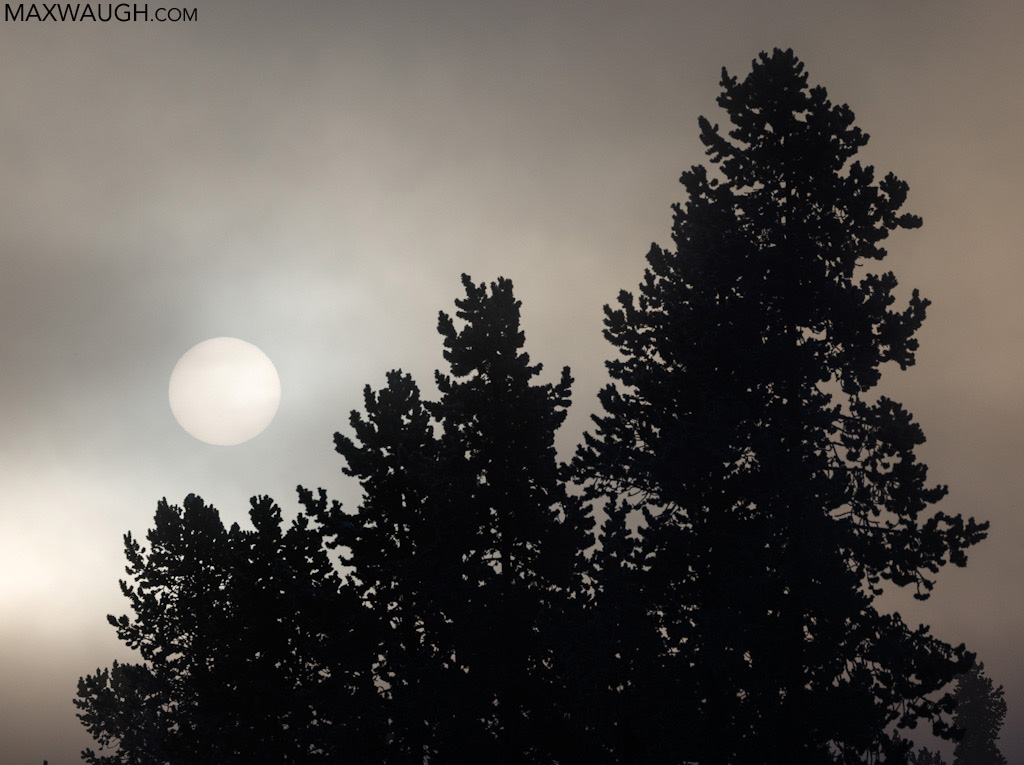 We soon arrived at a spot where the wolves had been active the previous afternoon, but only found tracks. And bison.

And that set the tone for the rest of the day: wolf tracks… and bison. The bison were real stars on Monday. We had numerous opportunities to photograph them in unique winter situations. 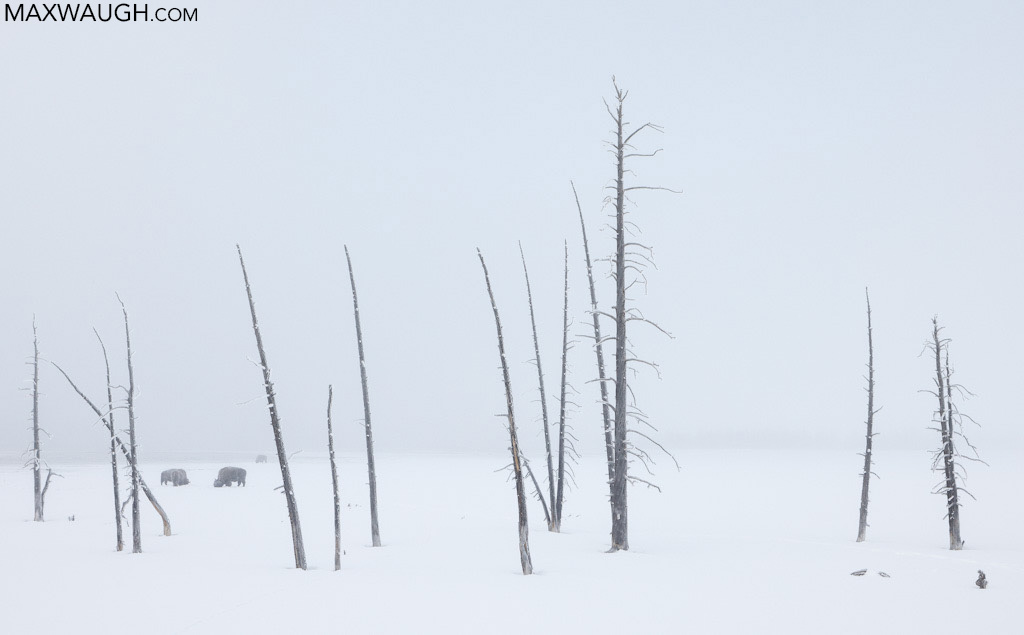 A couple of my clients had never even visited Yellowstone before, and now they were all getting an authentic winter experience. We stopped at the Bobbysocks trees and played around there for a bit. 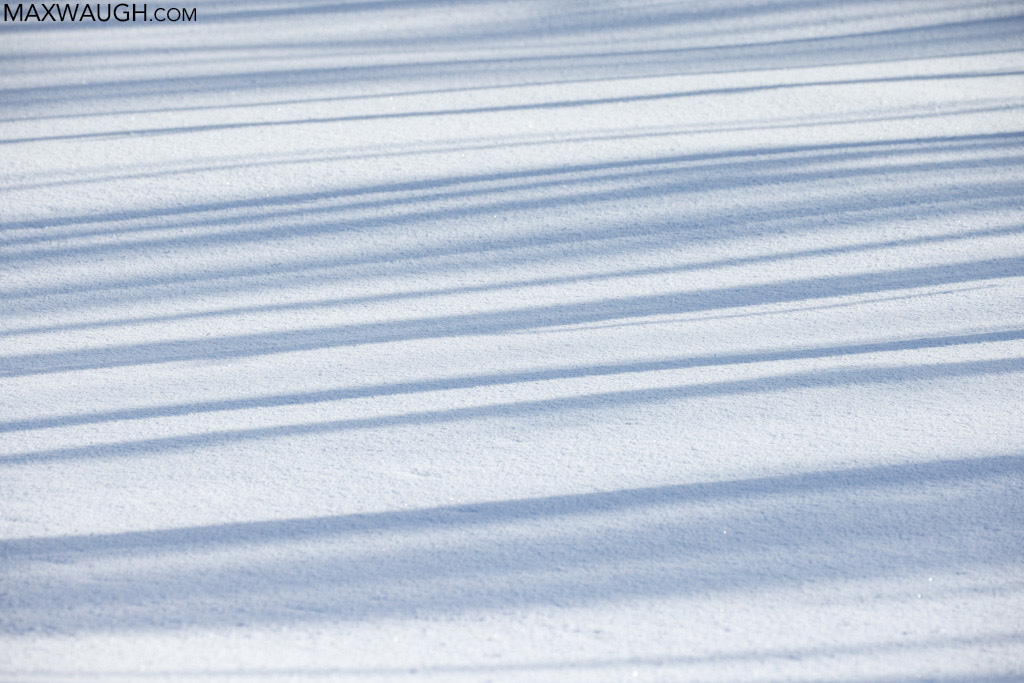 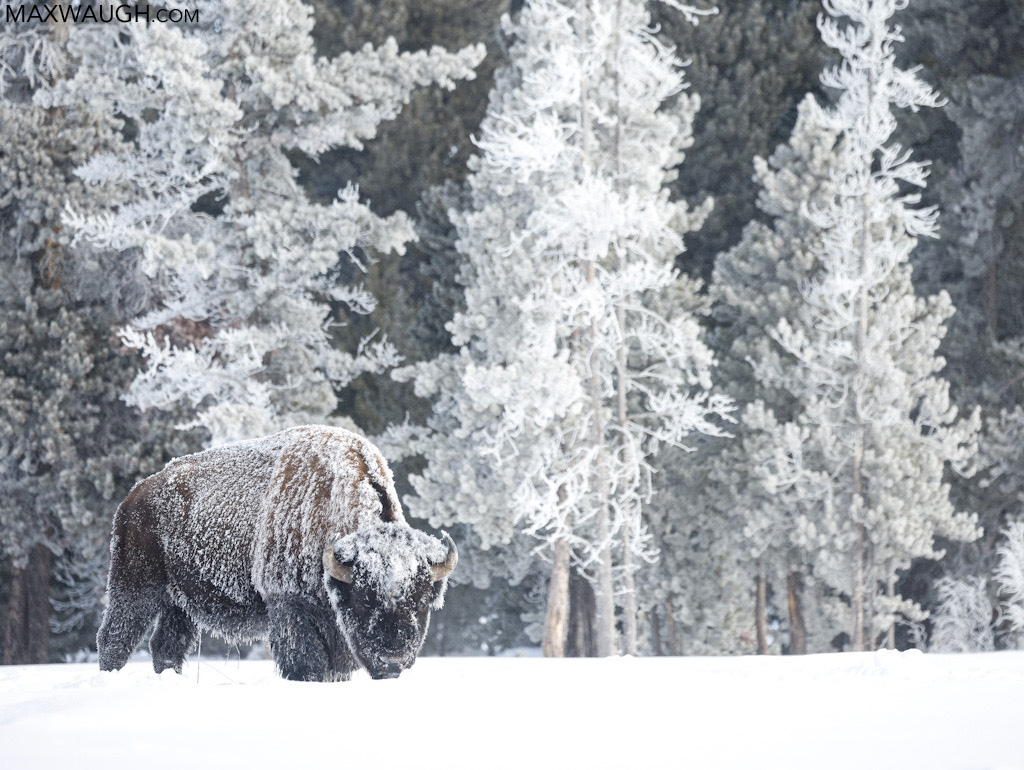 Heading back north, a riverside stop yielded some interesting opportunities to photograph waterfowl and scenery. First, the ducks… Ring-necked Ducks are a species I rarely see in the park, but they seem to be a bit more common in winter. 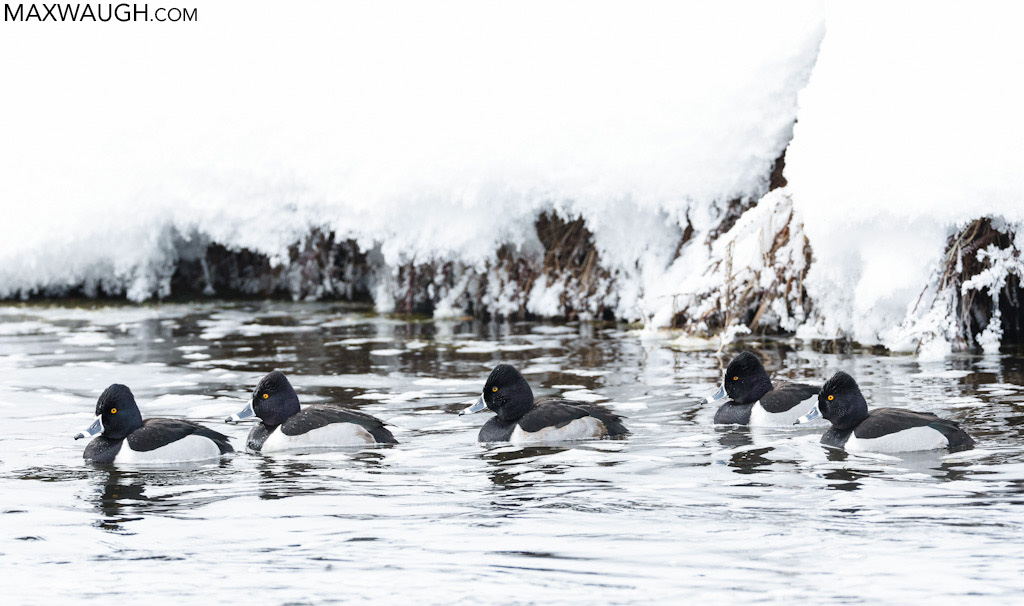 As for the scenery, I mostly focused on icicles near a waterfall. 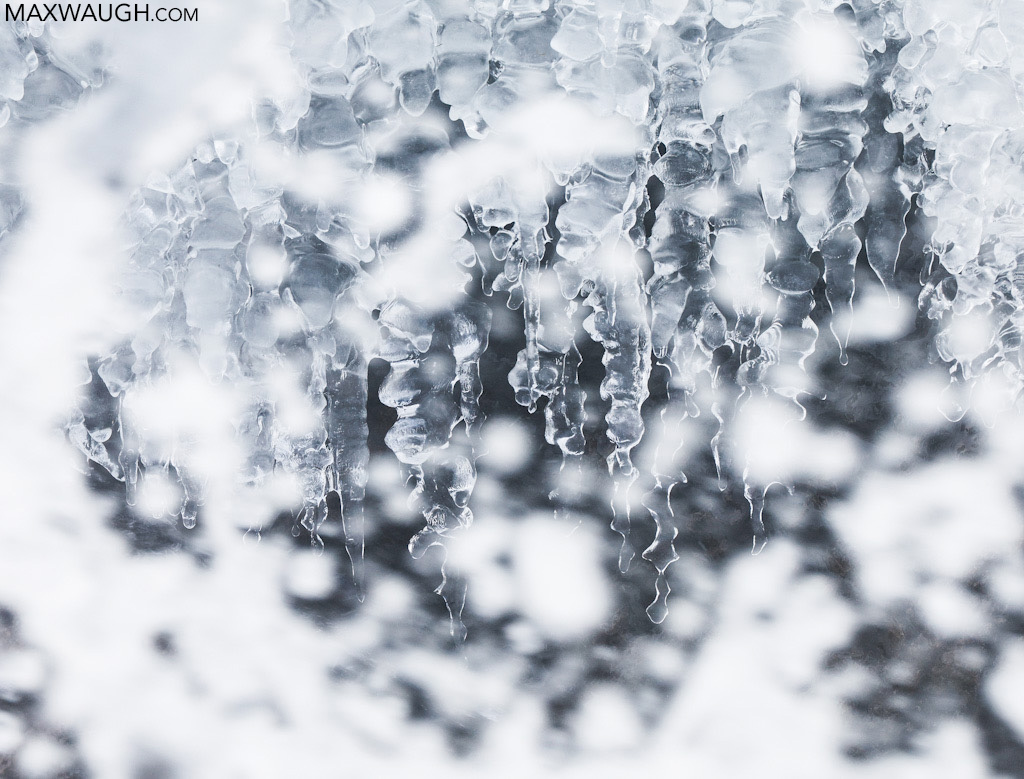 We had time to explore a short ways past Madison Junction, which paid off when client Candi and coach driver and guide Rylee spotted an odd raptor perched above the road. It didn’t look like a Bald Eagle, and my initial awkward glance through binoculars made me think it looked more hawkish. But I was wrong. It turned its head and was, in fact, all eagle. But not the kind one usually sees in the interior in winter. 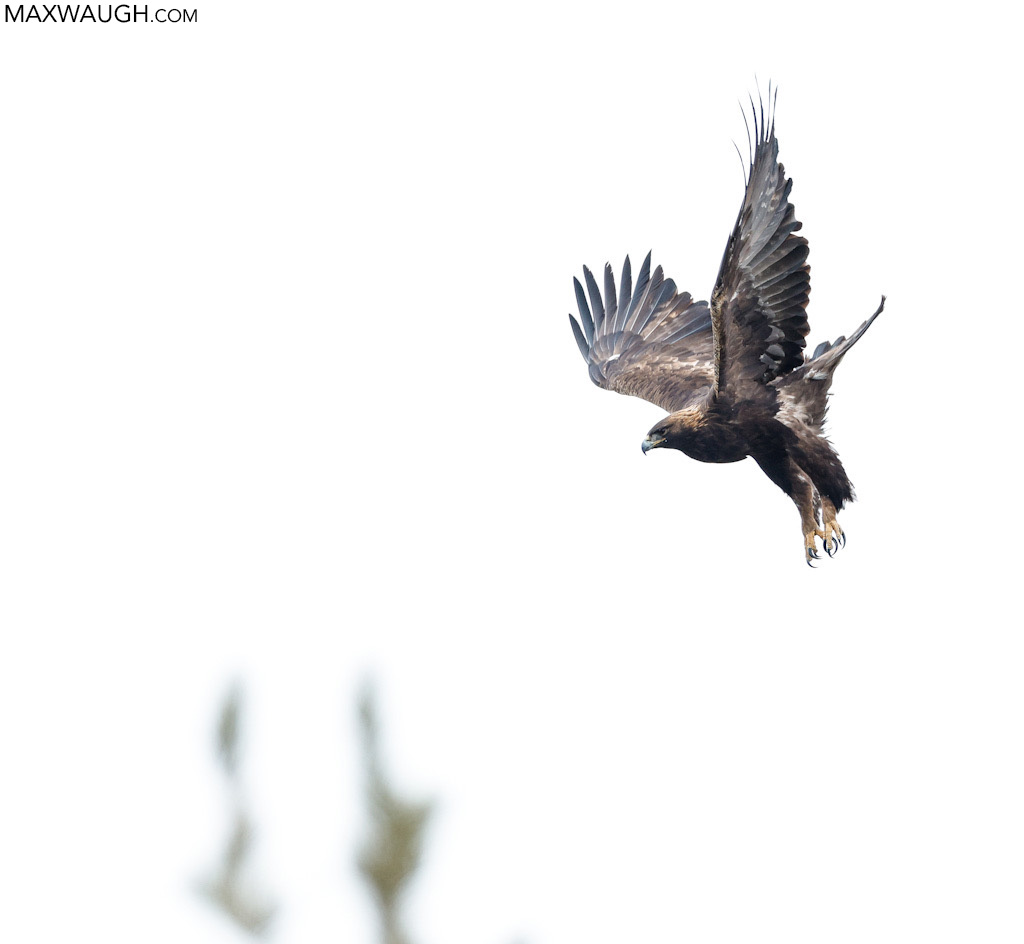 It was my first time seeing a Golden down here. Chalk up another unusual sighting on this trip! As usual, Yellowstone always comes through with new encounters. The drive home was uneventful, but snow continued to fall, well into the night. We’d be looking forward to a reset landscape and fresh tracks in the morning.