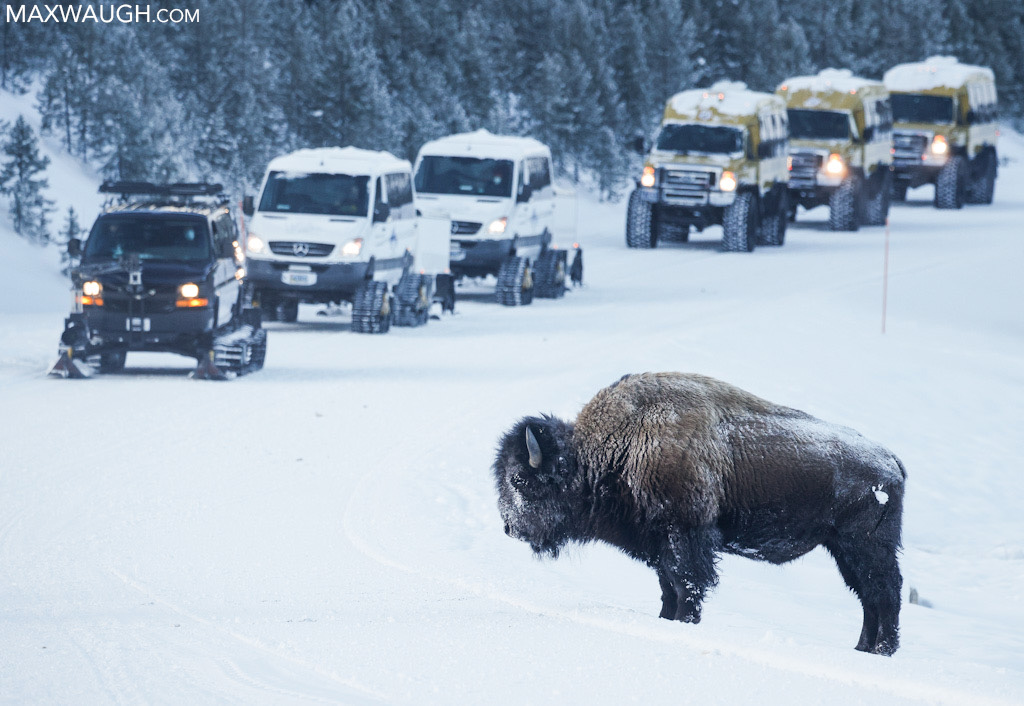 And after coming up empty on the canid front, we paused again for a nice frosty bull who was drawing a lot of attention at Midway Geyser Basin. A mob of photographers were crowding in close to him. We hung well back and managed to capture this nice scene instead. 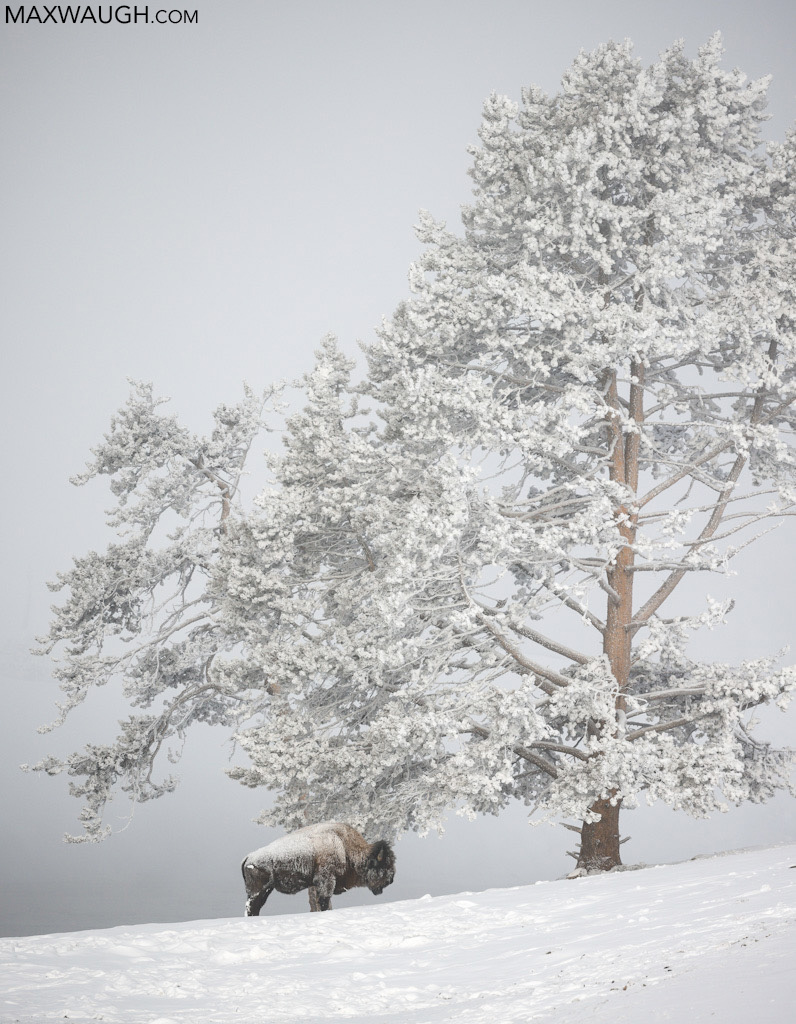 Since my group had not yet visited the east side of the park, it was the primary goal on Tuesday. On the way north, we pulled over to snap some quick photos of Chocolate Pot. It wasn’t fully lit up by the sun, but that made it even better, as the dappled light through the trees made this unique thermal extra moody. 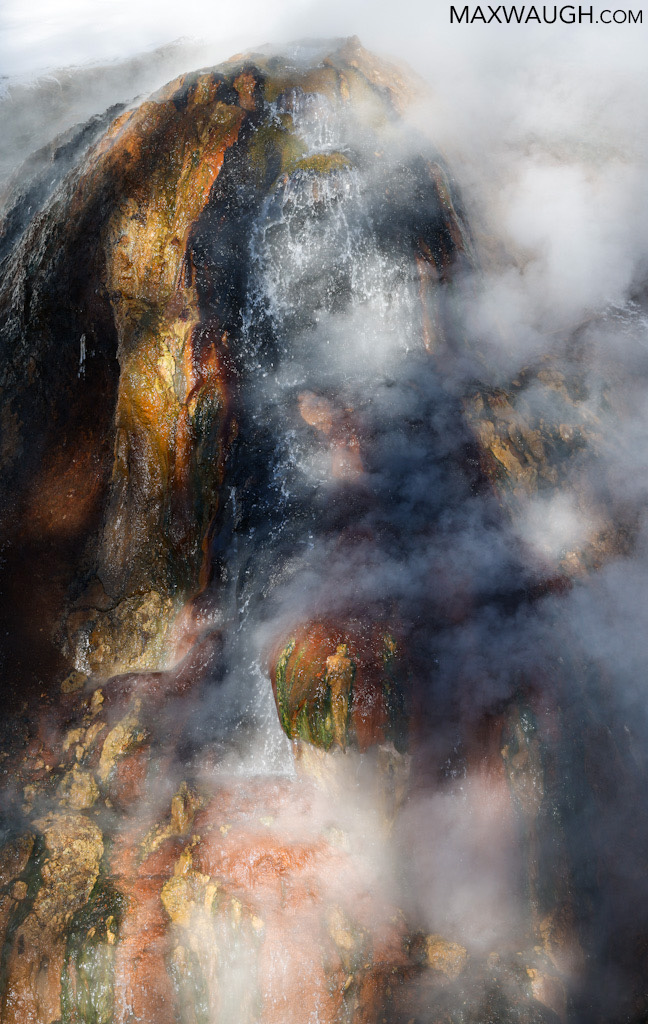 We arrived at Canyon with the intention of using the visitor center facilities, but spying a small photography group in action changed that. Pine martens were active again. We got some initial peeks from one individual, but it eventually went out of sight. The other photo group left. We opted to have lunch (almost a new tradition while we wait on martens), and the moment I started putting my sandwich together, it reappeared. Typical.

We got a few glimpses, but it wasn’t until client Bonnie spotted a second marten in a nearby tree that things got interesting.

As it turned out, we had four of them. I always sort of get mixed feelings about photographing such cool (and usually elusive) mammals in this spot… they’re coming to the park’s winter hubs (Old Faithful, Canyon, Madison) to scavenge from visitor centers, warming huts, trash cans, and dumpsters. So in this case it was nice to find two more martens down the road in the trees, away from any human food. 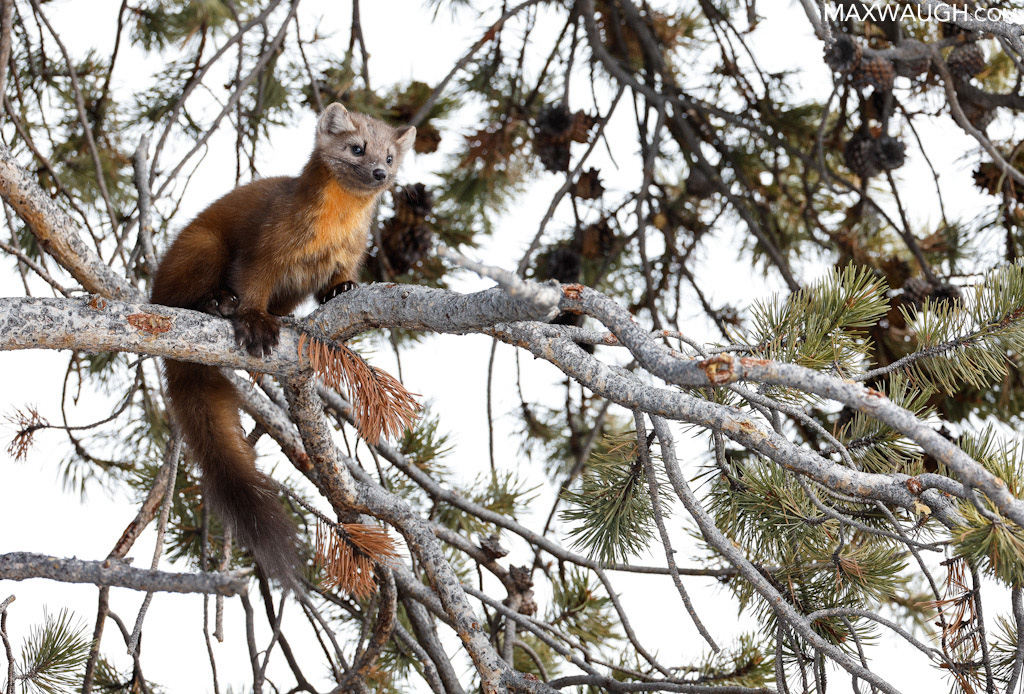 After getting better looks at them, it appeared we may have had an adult and three juveniles, but we can’t be sure. Young martens normally disperse in the fall. In this case, one was significantly larger and more robust than the rest… even a male/female difference in size wouldn’t seem to be this pronounced. I guess we’ll never know for certain. At one point, three were in the same tree together. Not for long, as the big one tussled with each of the remaining two and sent them flying out of the tree. For a moment there, it was raining martens.

A quick exploration of Hayden Valley yielded otter sign and distant coyotes. At one pullout, ravens patiently studied our snow coach. The moment the driver’s side door opened, one raven flew around and parked itself underneath. I simply can’t imagine why. 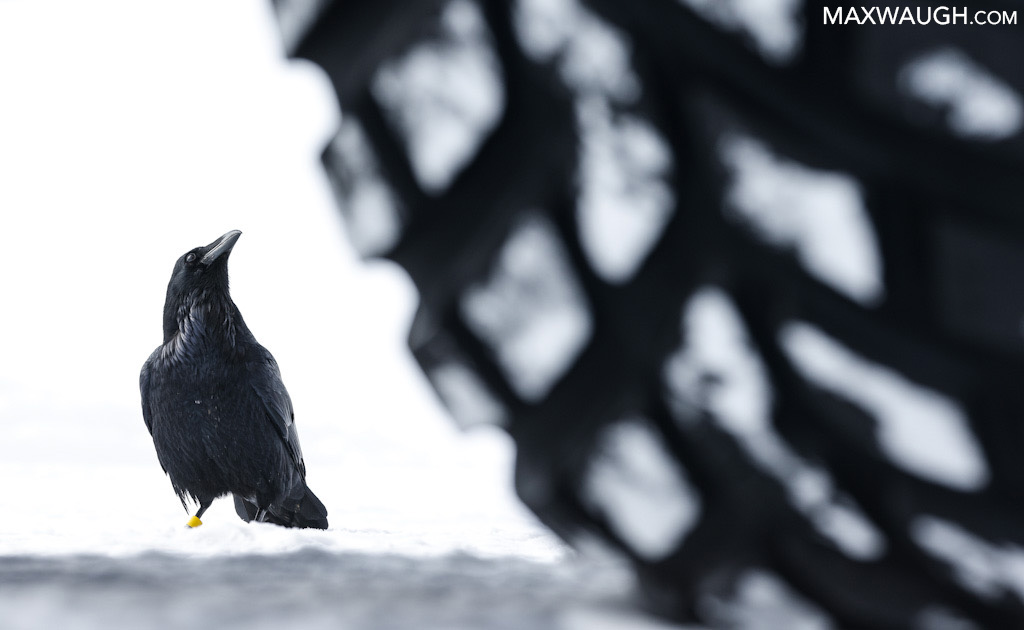 We had time to race back to the west side, hoping to make one last dash south in case there were doggies about. We never made it. Not for the first time on this trip, we encountered a bison herd in the road. They were coming our way, and we really didn’t want to get stuck behind them coming back. So we turned around, drove ahead, and watched as a parade of bison and endless snowmobilers plowed toward us. 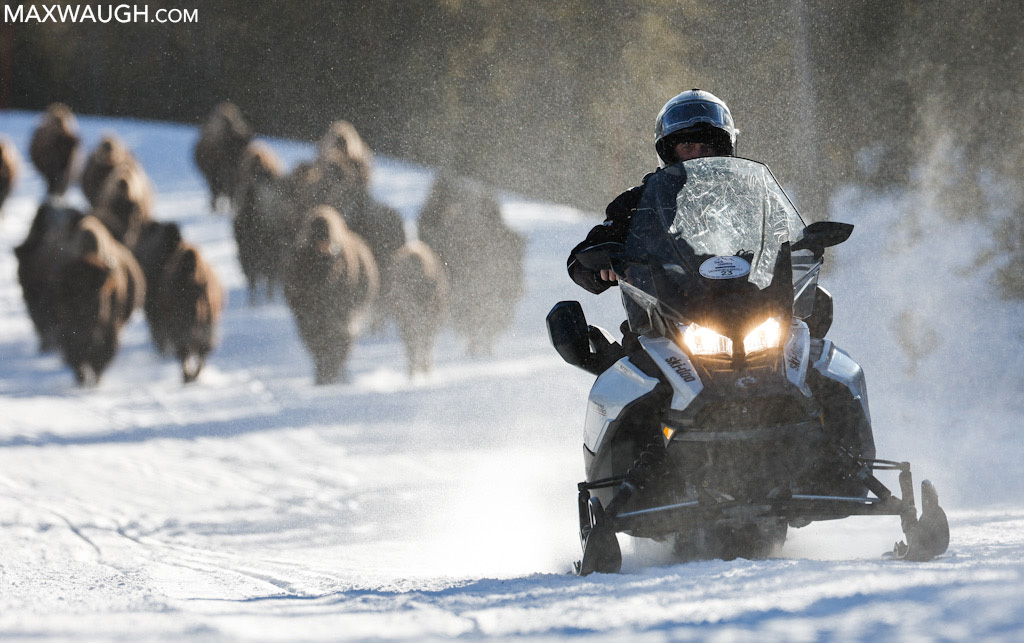 The Madison didn’t produce anything extraordinary for us. We made a couple passes, and as a result just missed our fifth marten as evening approached.

Wednesday marks the final day of our interior exploration. We will then turn our attention northward.

Our final day in the interior began with a waiting game. Until now, we hadn’t had clear skies, which meant no real sunrises on the Madison. Wednesday was different. So we waited for golden light to slip over the mountains and light up the river corridor. And we waited.

It sure seemed to take a while, perhaps because there was little else going on along the river. We just hoped that the sunlight would light up the morning mist, and that maybe we’d get some swans in the frame. Eventually, that did happen. Our patience paid off, at least in a small way. 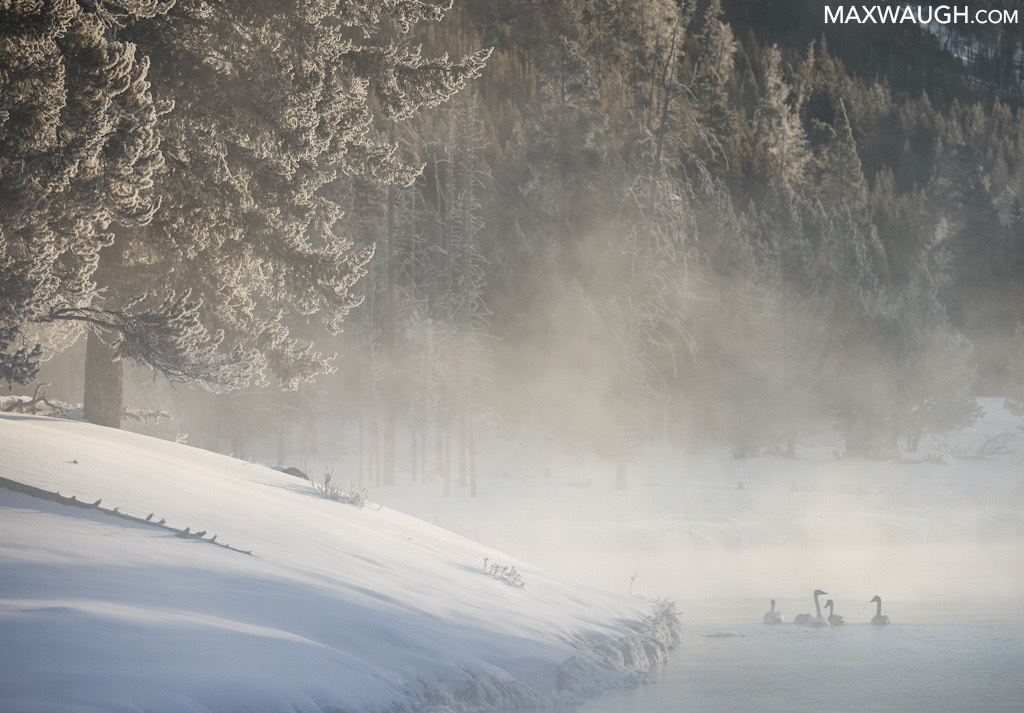 Once again, we drove south in the snow coach, hoping to find some sort of Canid action. Once again, we struck out, but were again rewarded with some moody bisonscapes. People are no longer surprised when they run into me at a wintery bison photo shoot. 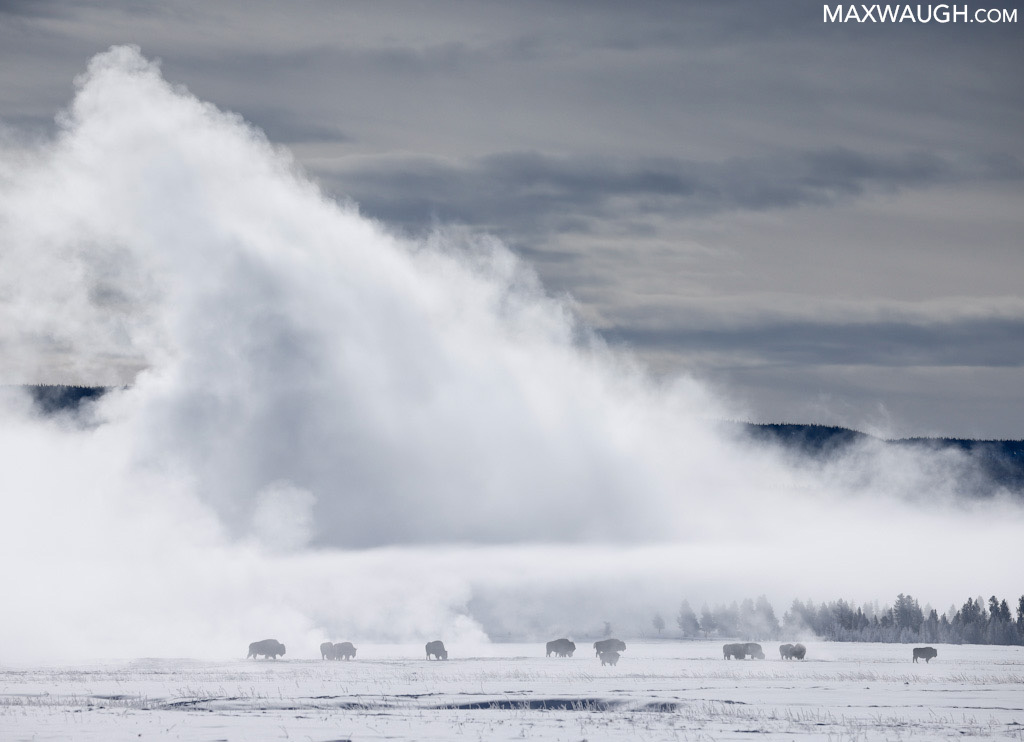 It’s not like I seek these moments out. There just happen to be a great many such opportunities presenting themselves in the park at this time of year. They’re impossible to ignore.

The hazy mood lingered throughout the morning. At Fountain Paint Pots, a pair of ravens huddled in the cold of the steamy morning. 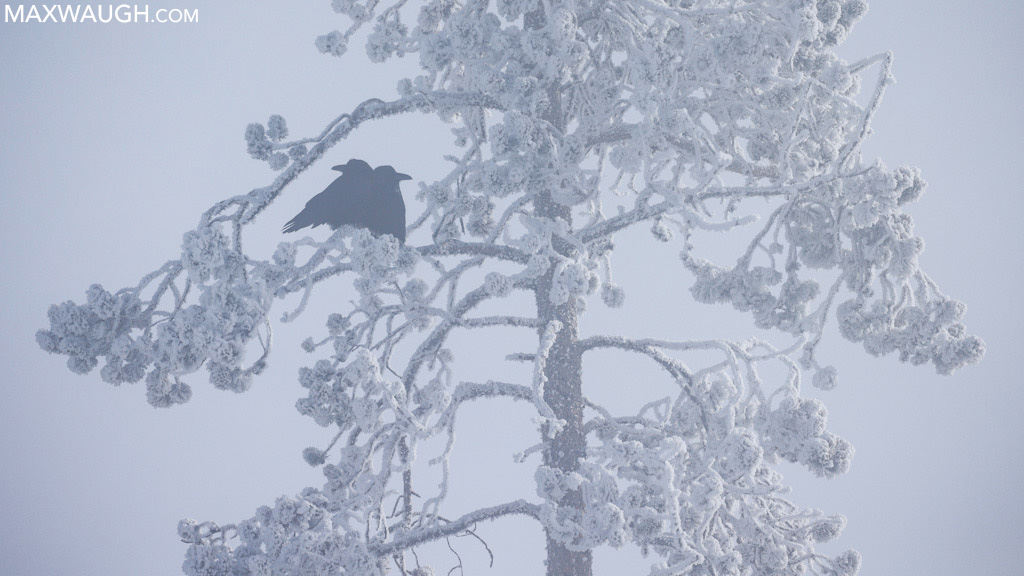 The rest of the afternoon is a bit of a blur. We returned to the Madison to look for ermine (so many tracks!) while having lunch. No action. Stopping at the warming hut, I snapped photos of… a chickadee. 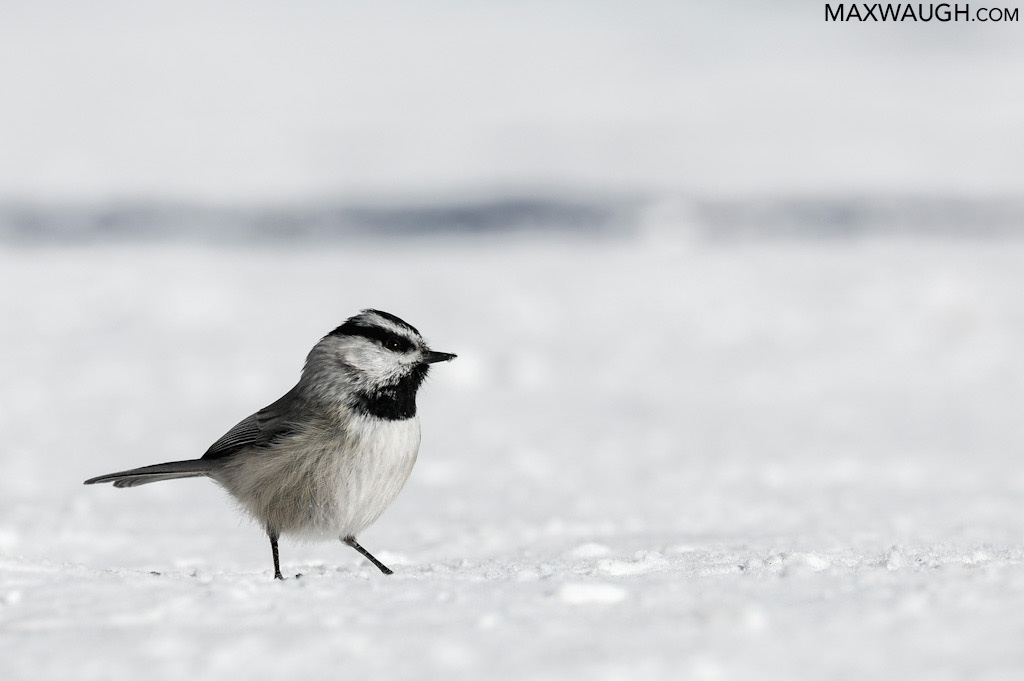 The Mountain Chickadee is actually a species I have photographed only a few times. Something for the archive. I also noticed the ranger didn’t list our Golden Eagle sighting on the sightings board. Maybe she didn’t believe me. Or she figured I couldn’t tell the difference between a Golden and a juvenile Bald Eagle. It would’ve made my sightings board!

We had time for one last quick run south. No more notable wildlife sightings (and the morning’s lingering fog had finally worn off). On the way back, we stopped for lines and shadows. 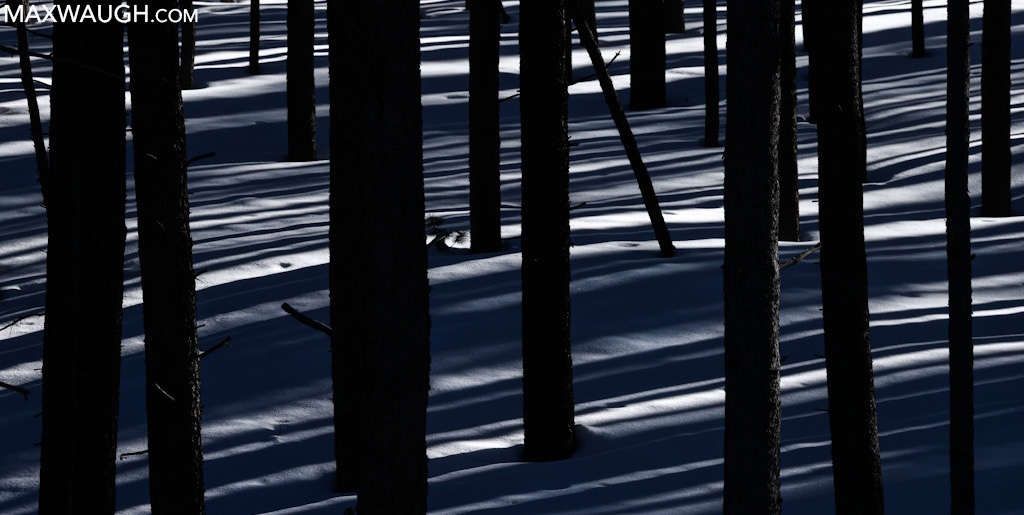 Back in West Yellowstone, we said goodbye to Rylee, my coach partner and fellow interior guide these last two weeks. She did a great job for my groups. Then we made the long trek around to Gardiner. Northern range exploration begins Thursday…

I took no photos on Thursday, but it was still a good day. This is one of the nice things about hosting a group—comprised both of Yellowstone first timers and park veterans—that is open to whatever comes, and gets excited for new experiences, even the small ones.

It was a cold morning (we reached -8 at one point), but beautiful. Our first passes in the morning proceeded quickly, with few stops beyond the occasional scenic snapshot opportunity. We actually passed up the most dynamic scene, featuring frosty rim-lit bison (perhaps due to Awesome Bison Hangover from the interior), in hopes of finding something new and different.

And we did get our first moose of the tour, seven in total, but they were never in good spots for photos. It wasn’t until the afternoon that things finally picked up a bit. Bighorn rams appeared near the road in the eastern Lamar, our first sheep shoot this week. A Golden Eagle watched us from on high, while a dipper skittered on the ice below.

On the way home, I took the vehicle onto a somewhat soft shoulder in order to get off the road so my clients could safely snap a rare magpie shot in nice afternoon light. Don’t tell me I don’t make sacrifices for my guests! We did manage to get back on the road okay, and though the light was fading, I took the group onto the Boundary Road in order to land them their first looks at pronghorn.

The North may have tried to hide its secrets again, but it failed to get us down. Chalk it up as another fun day on tour!