We hit -21F Friday morning. Yeah, that was cold, though honestly, I felt worse when it was 28 and windy later in the day. But I still had to break out my thicker gloves for the first time on this trip. My giant Michelin Man jacket still hasn’t been dusted off, however, so we haven’t reached true extremes yet. Either that, or there’s just nothing keeping us outside the vehicle suffering for super long stretches.

The morning’s drive took us up to the northeast. Pullouts throughout the Lamar were full as people parked to stop and take pictures of the thick layer of fog covering the valley floor. We followed suit, but soon drove east to see how the landscape might change… and were rewarded with frosty cottonwoods. 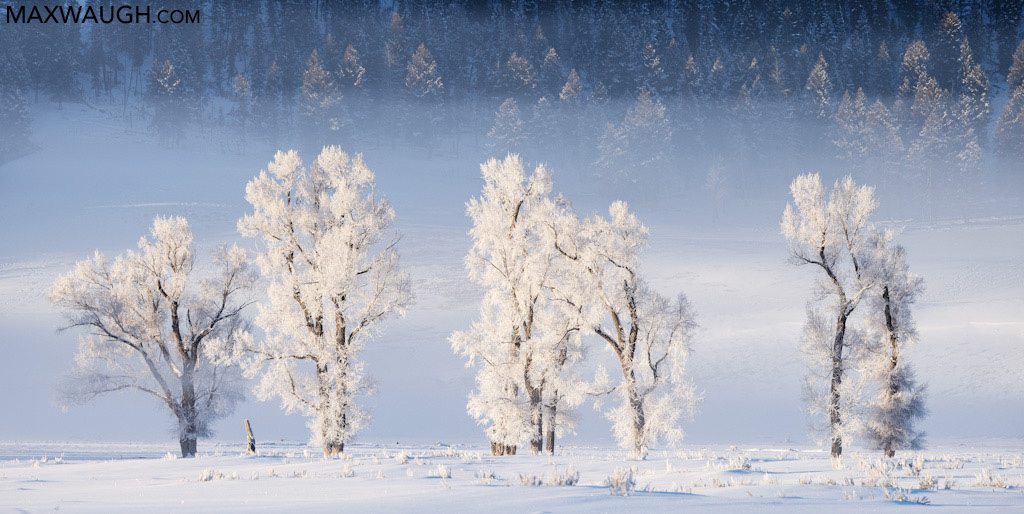 Would I have liked a bison to walk through there at that moment? Obviously, but it was still a beautiful sight.

Soon we had sightings of distant moose at Round Prairie, and then we pulled off at Pebble for a quick pit stop. This cost us a potential major sighting, as a couple hundred yards down the road, a wolf was seen. It even left us a couple calling cards on the pavement (no, I didn’t take photos… I’ve already photographed wolf poop).

A short while later others spotted it disappearing into the far tree line. We continued our search for more critters. Wolves would be good, but we also have yet to land a fox, and I’m always looking for owls, aren’t I?

At least one of my clients is keen on birds, which is always a good thing, but avian options are more limited in winter. I foolishly opened my mouth the previous day and mentioned how I’d seen Bohemian Waxwings during winter trips many years ago. Like, twice. Now images of waxwings danced in people’s heads.

With little to show for our northeast exploration, we backtracked westward. I wanted to switch things up, so we stopped at Mammoth… for birds, believe it or not. I have seen solitaires and pipits among the active terraces, so why not check? No solitaires, but we did get magpies! 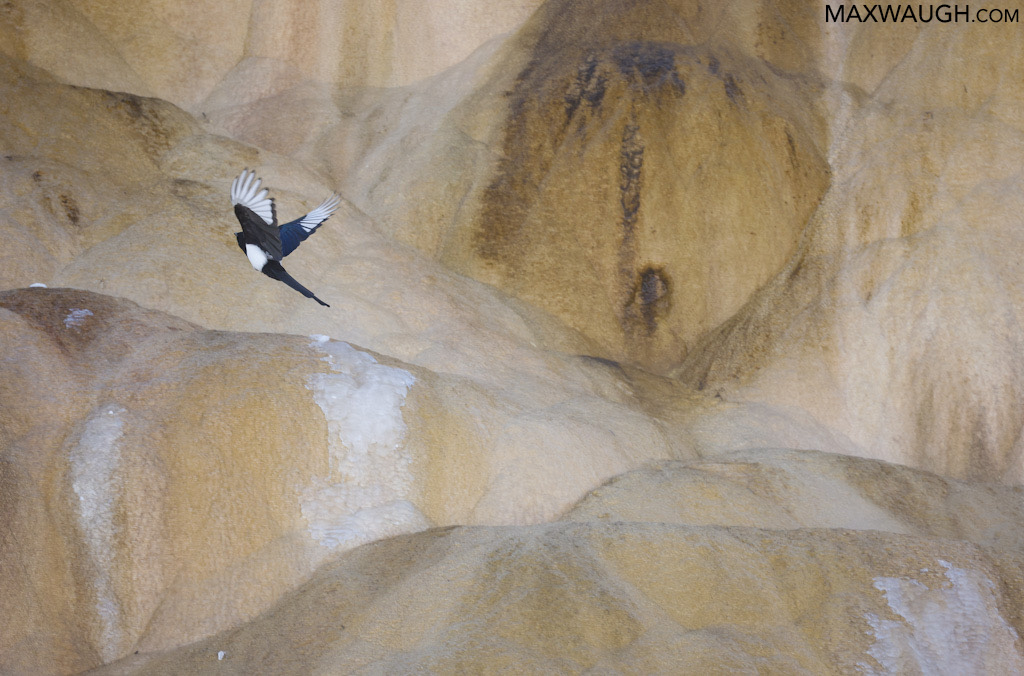 That was a nice surprise, and after a hot chocolate stop, we continued with our attempt to try new things, leaving the park and driving out along the northern boundary. I pulled over near the bridge at Corwin Springs, ostensibly to check for otters, and was stunned to see the trees right in front of us filled with… Bohemian Waxwings! 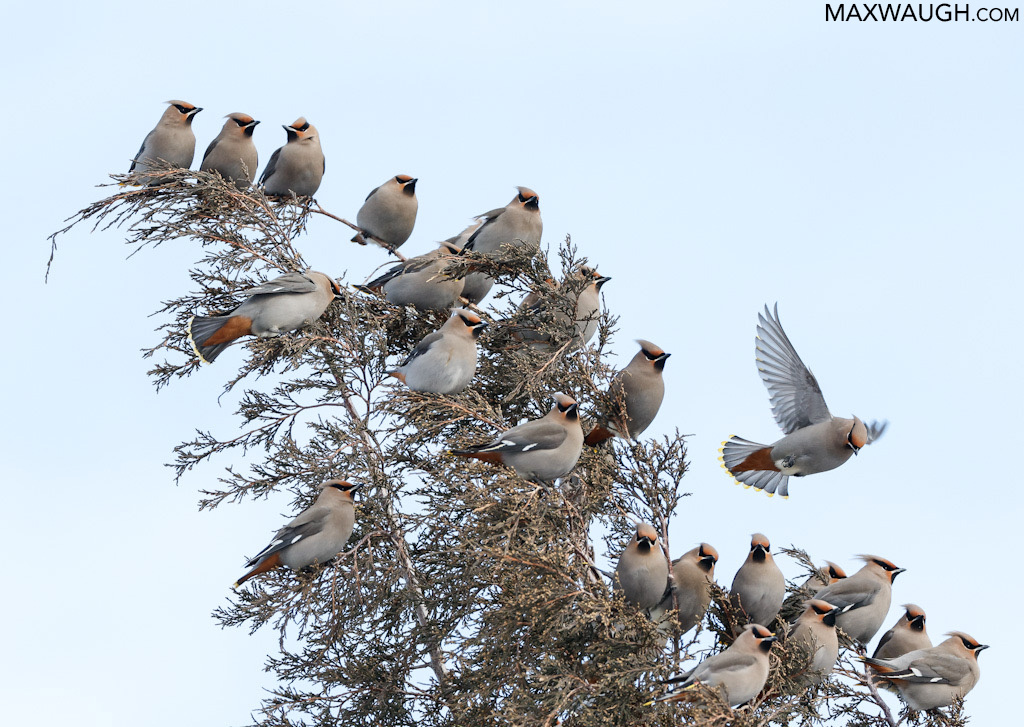 I’d only had one decent photo op with this species—one of Yellowstone’s most beautiful birds—and that was nine years ago with a smallish flock. Now we had hundreds buzzing around between trees along the river. What a fantastic surprise.

High fives exchanged, we wrapped up our lunch and continued searching. I did find somewhat fresh otter sign along the Yellowstone River, but no otters. We headed back into the park for our final hours of daylight.

Overall, the drive was as quiet as usual. We finally had a close coyote sighting, as the same lumpy (this was supposed to read “limpy,” but I like what autocorrect was thinking here) coyote I encountered two weeks ago crossed the road near us. But that was about it.

Saturday marks the final day of this trip. Fingers crossed for a grand finale.

I thought the temperature might be a bit more palatable on our final morning. It was in the teens in Gardiner.

It was in the negative teens in the park. Oh boy.

As we approached Hellroaring, the sky was full of magical colors. We squeezed in among other vehicles to snap a few pics while everyone else looked for wolves. 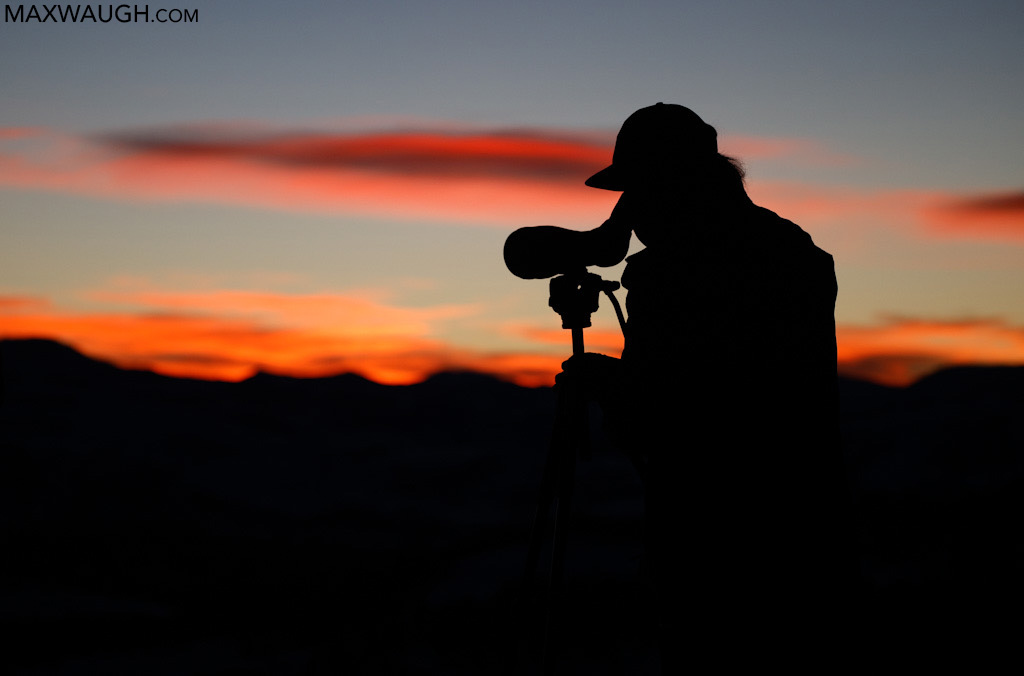 It wasn’t quite as cold this morning as yesterday, but it didn’t matter as much since there was little to pull us out of the vehicle. We continued to look for the usual suspects, but only distant moose showed themselves at Round Prairie.

If there’s one good indicator that wildlife activity is slow at a given time, it may be a lack of coyote sightings. The past two-and-a-half weeks, coyotes have proven to be elusive, and have rarely approached the road. On past winter trips roadside coyotes were an almost-daily occurrence.

But as with the foxes, a lack of snow gives them an excuse to hunt in wider territories (and probably more successfully), and they don’t need to rely on the ease of travel provided by plowed roads.

Much of the day was spent counting treetops that were awaiting pygmy owls, and following the zig-zag tracks of ermine in the snow. Neither of which proved fruitful. We did stop for moose in front of Barronette Peak. During the first visit, they were back in the trees. The second time, one of the few bulls with antlers stood out in the sunshine. 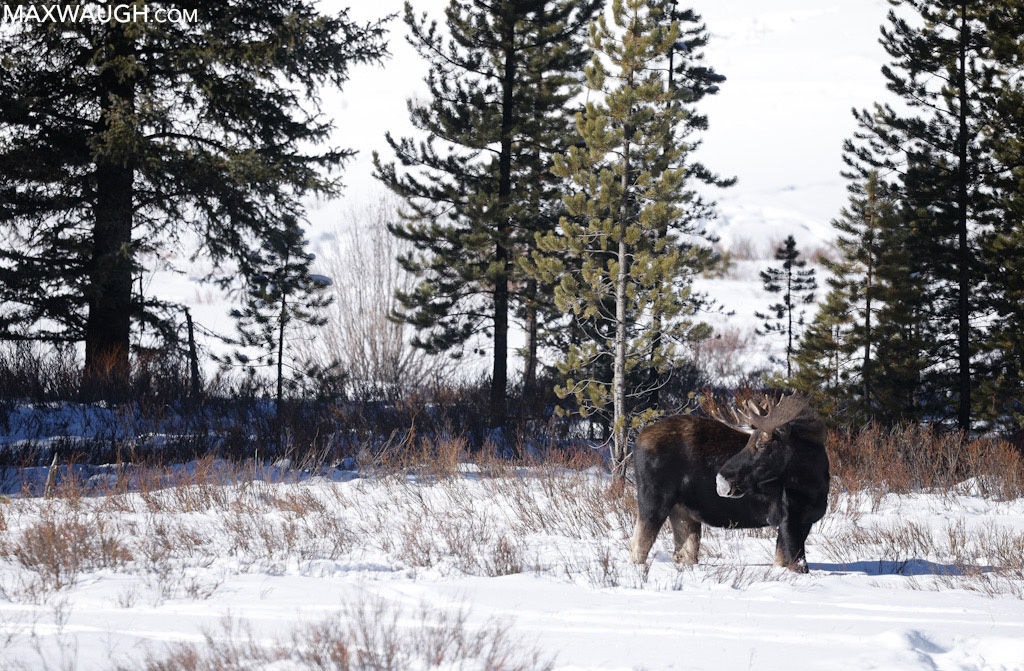 We had lunch in Silver Gate, missing an ermine near the northeast gate by about ten minutes (thirty minutes of extra searching were needed to confirm that we indeed did miss it).

The final drive through the park did not yield the grand finale we’d all hoped for. Though there were opportunities to wait on wolves (and even bears!) with other speculators, we chose instead to close the tour with one last search for smaller critters.

We wrapped things up with a group dinner back in Gardiner. Tomorrow, it’s time to head home. It was a fun week with this group, who came together sporting different levels of experience in the park (but for each it was their first winter park trip). They approached this trip with an open mind, and embraced both the exciting and slower times with equanimity. It made for a great tour. Big thanks to Andy, Candi, Cris and Bonnie!

Though I had not planned to offer winter tours until 2024, there’s been significant interest from several people, so I may try to schedule one or two trips for 2023. If you’re interested in joining the waiting list, feel free to contact me.