It’s bracket time here in the States, so I’ve decided to put together a bracket featuring sixty-four different species, as part of a just-for-fun game I’ll be running on my Facebook and Instagram pages. I’ll ask folks to vote on their favorite animals in head-to-head showdowns, as we whittle the field down to a last four, and eventually, a “champion.”

And before you ask, no, it’s not an original idea. Dr. Katie Hinde has been running a “March Mammal Madness” bracket for several years, and of course, Fat Bear Week has taken the world by storm with bracket-style fun in recent years. This is just an excuse to share my photos of various species, present facts about the participants, and get people hyped about different animals (some of which they may not be familiar with… though I tried not to get too obscure).

The four regions aren’t broken down geographically. I opted for different themes, in part to give what may be less popular species a fighting chance to go far. The groupings are as follows:

Just a Salad, Please: Herbivores
Not Strange, Just Different: Animals with strange or unique features or adaptations.
Don’t Hate Us Because We’re Beautiful: Pretty beasts.
We’ll Have the Meats: Definitely not herbivores!

The March Wilderness! bracket is below. If you want, feel free to save/print a copy and make your predictions… again, it’s just for fun! The tournament will be conducted on my Facebook page, via very informal votes. I will try to update this post, the blog, and the bracket with the winners following each round.

Here’s the updated bracket after the March 25 games: 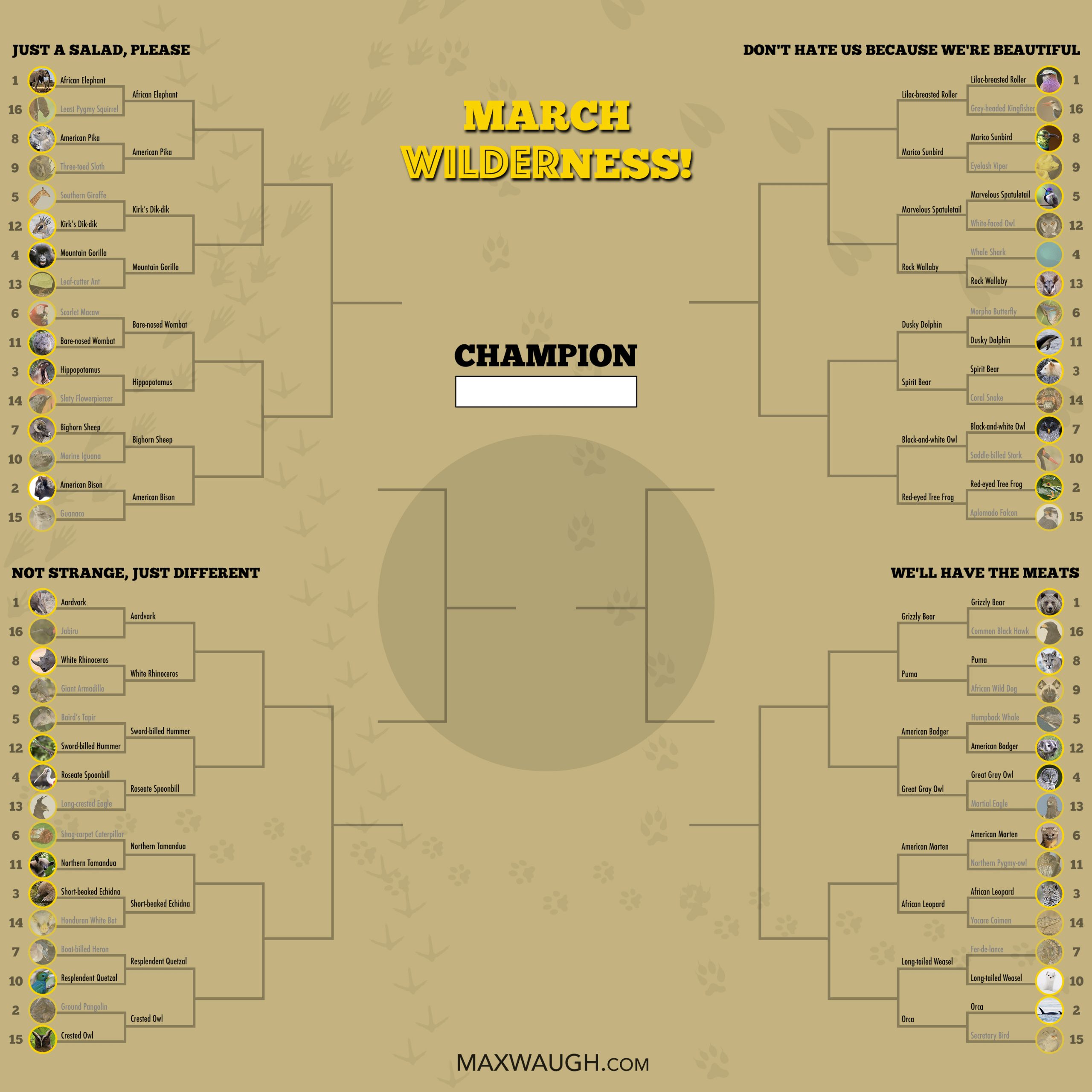 I’m not going to give away my “last four” picks or my champion right now… I’ll save those for the end. I do think much of the vote will favor popular, larger animals, one reason I tried to pair a lot of the predators and large herbivores together. I also think that patterns I’ve noticed over the years with my audience will play out here: namely that birds (except for owls), primates, and creepy crawlies don’t get much love from my followers. Maybe that’s one reason I (accidentally, I assure you) didn’t include any monkeys.

There are some intriguing matchups, but it’s hard to find real dark horses (in fact, there are no equids in the bracket). I think the toughest/most intriguing first-round matchups are as follows:

Macaw/Wombat went to Overtime. The others weren’t all that close.

My picks for the most overrated seeds in the bracket (while acknowledging that I put it together):

The caterpillar lost in Round One. Orca and Hippo both fell in Round 3 to lower seeds.

My picks for the most underrated seeds:

Badger, Wombat and Quetzal all reached the final sixteen! Falcon lost in the first round.

FOR INFO ON THE NEXT ROUND, CHECK OUT THE NEXT BLOG POST!

As a reminder, you can participate by voting on my Facebook page, or my Instagram page, and check back here for updates!