We’ve reached the climax of the March WILDERness bracket. My followers on Facebook and Instagram have picked favorites between different animals for over two weeks. Regional winners have been decided, and we have our Last Four. A champion will be crowned by Monday night!

Here’s the bracket following the April 12 championship game. Congratulations to our champion! 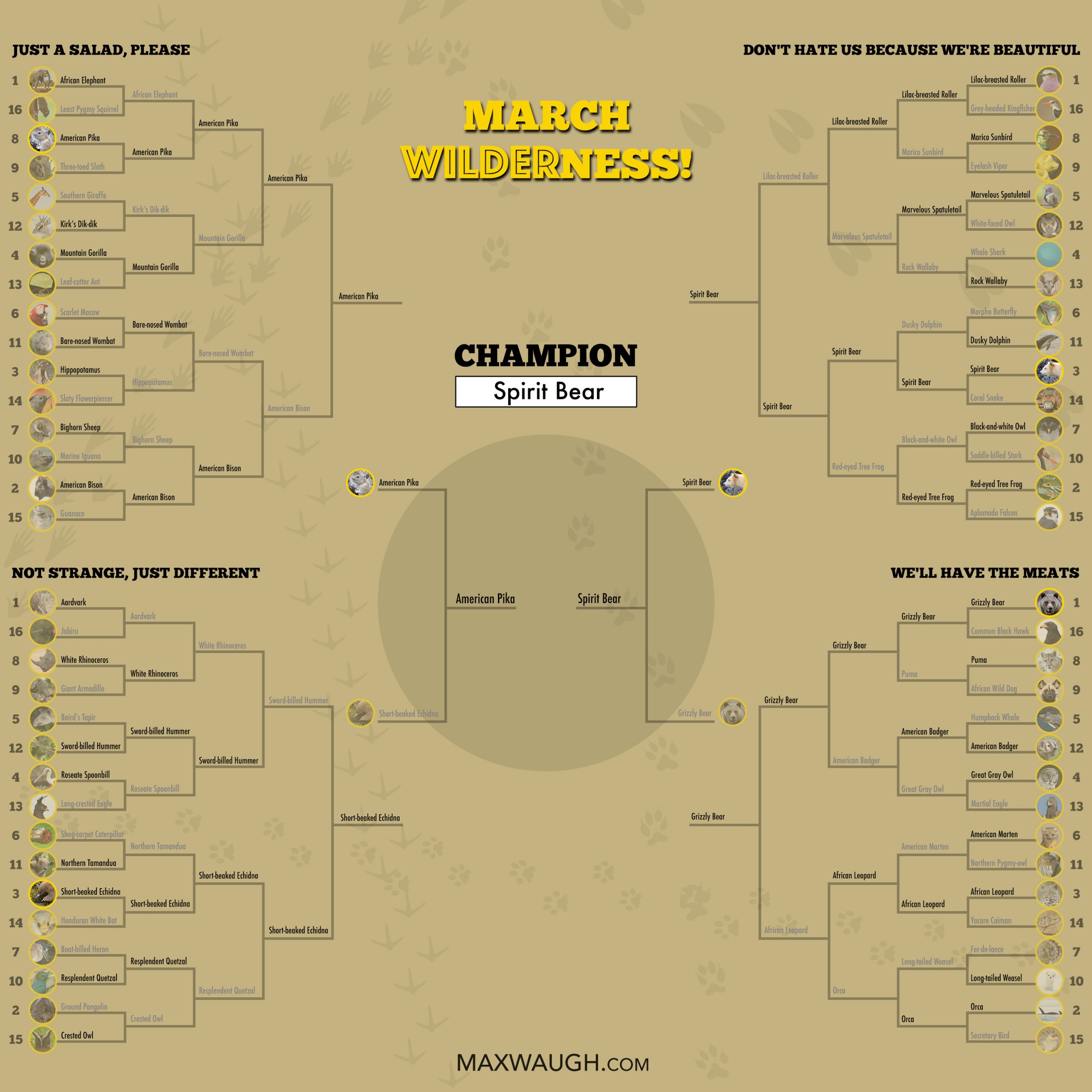 Rounds of 16 and Round of 8 Thoughts:

Things tightened up even more in Rounds 3 and 4. Even though we didn’t have an overtime game, the average margin of victory continued to shrink. It was also fun to see a couple of lower seeds have a realistic chance of breaking through to the Last Four. One of them, the American Pika, won its region as an 8-seed… though, as you’ll see below, this may not have been a surprise to everyone.

Biggest Surprises (to me):

The Sword-billed Hummingbird was the surprise of the tournament. As a 12-seed, it came with four points of reaching the Last Four!

My Predictions: Here were my picks—made before the tournament started. 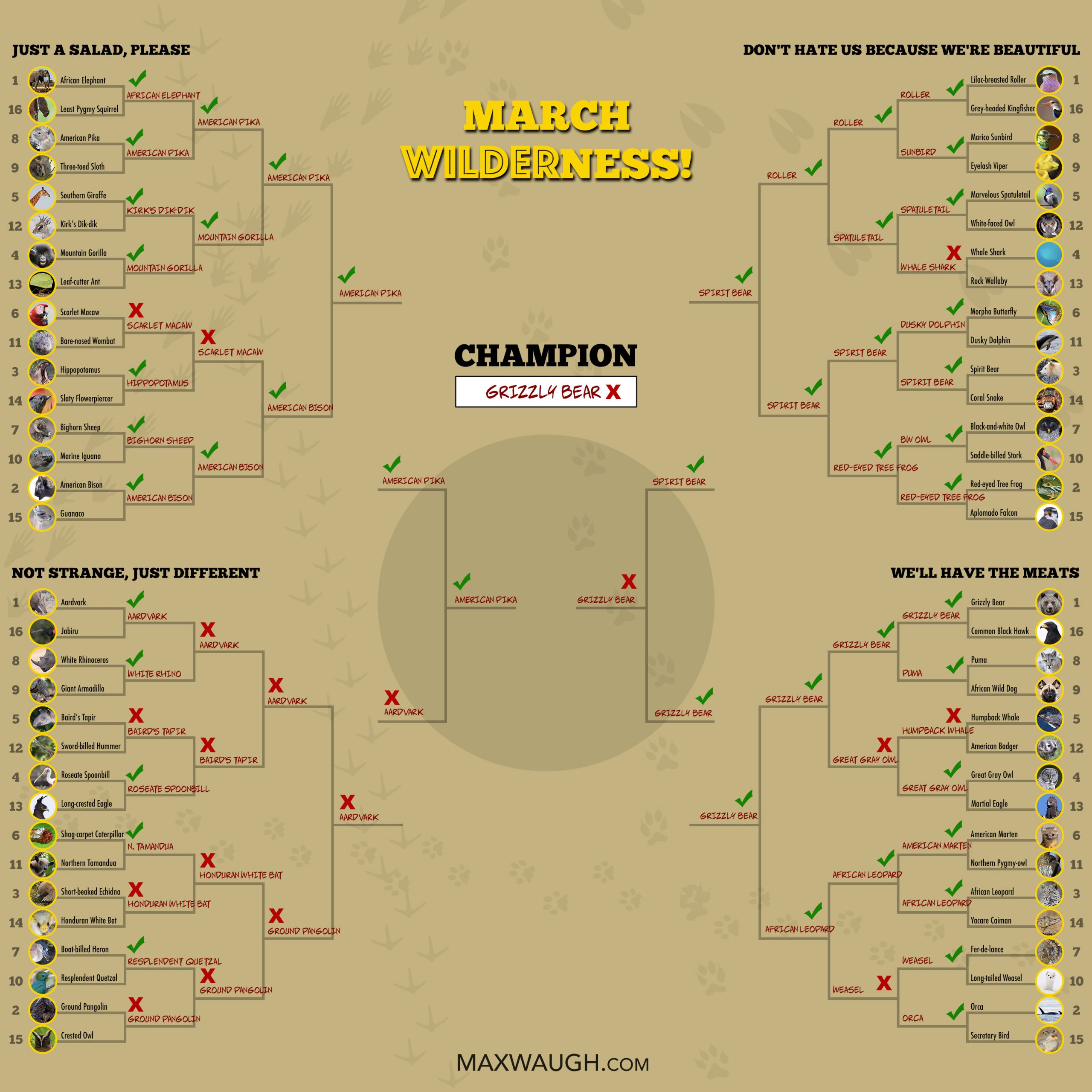 With the exception of one region, I’d say I did quite well in predicting what my audience would go for!

What about my pre-tourney picks for most overrated/underrated:

The caterpillar lost in Round One. Orca and Hippo both fell in Round 3 to lower seeds.

Badger, Wombat and Quetzal all reached the final sixteen! Falcon lost in the first round.

My Picks for the Best Matchup of the Semifinals:

I could realistically see every one of the remaining contestants advancing to the finals. I am sticking with my predictions for the championship round (which I won’t reveal here), but I think the bear matchup is the most intriguing and has the best chance of being close. The bear matchup was closest, 29-22. Interestingly, the bears tied in the Facebook vote, but it was one-sided on Instagram. Meanwhile, the Pika and Echidna tied on Instagram, but it was one-sided on Facebook.

Regarding My Semi-Final Prediction: Before the tournament started, I had the American Pika facing off against the Grizzly Bear in the tournament final. So the pika’s “upset” run to the championship round was not a surprise. And though I correctly predicted the other final, I was surprised (pleasantly so, as a fan of the spirit bear) that the white bear took down the heavily-favored grizzly. I think there’s a bit more intrigue now in the final. The bear, once again, should be the favorite, but the Pika continues to roll and has a real chance!

Congratulations to our 2022 March WILDERness champion! 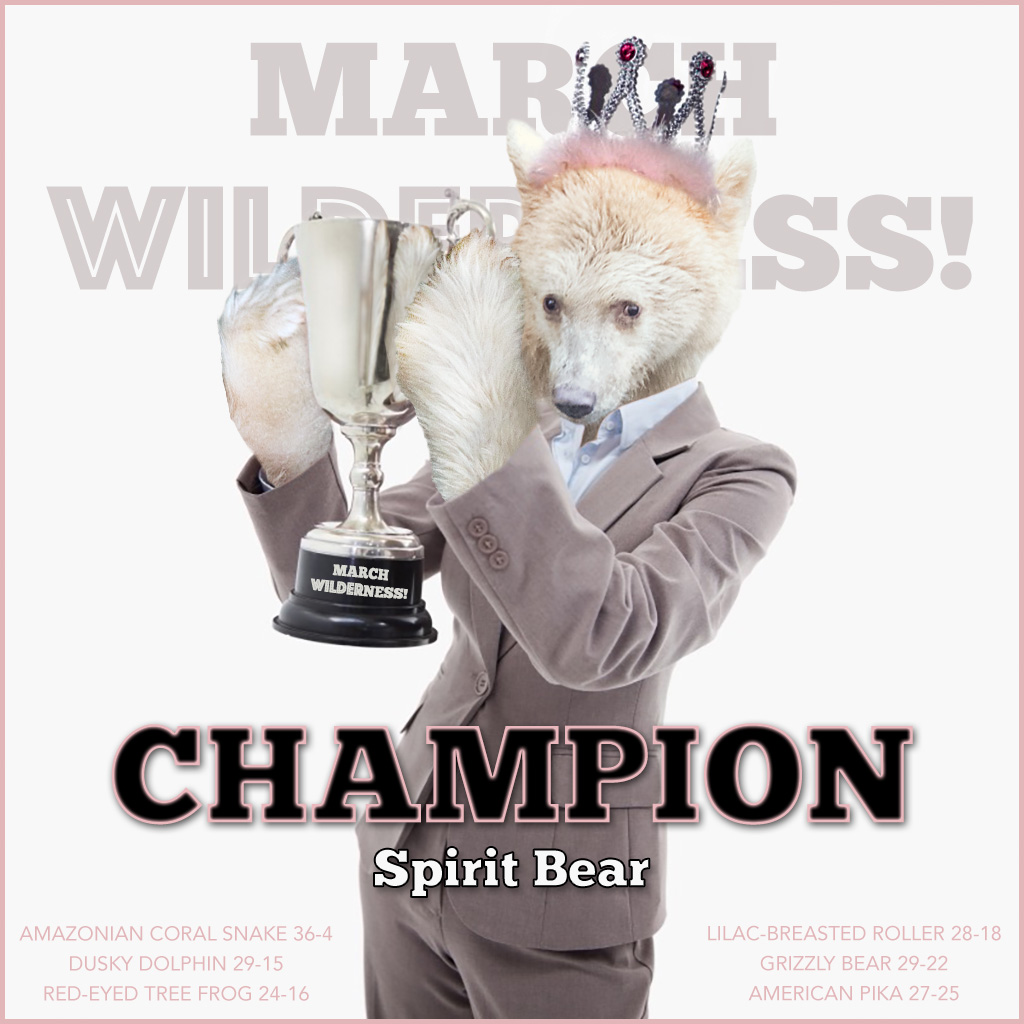 Postscript: This endeavor required a ton of effort on my part. Lots of graphics work, writing, etc. And it wasn’t something I could pre-schedule ahead of time, since I had to tabulate results and create matchup graphics based on the votes. So I’m not sure when and if this will happen again… but it was a lot of fun in the meantime. Big thanks to everyone who voted and participated!