This is Part Two of my Brazil collection. A couple weeks ago, I released the bird photos from my most recent Brazil tour. You can check those out in the archive (it was a great bird photography trip!). Now it’s time for the rest of the images.

Mammals—especially jaguars—are a primary goal for most folks on my tour. The northern Pantanal is the best place in the world to see and photograph jaguars, and we had more jaguar sightings than ever on this trip, averaging nearly five cats per outing. We even saw two jaguars in the southern Pantanal during game drives (including my first ever at night). Why was the southern Pantanal on the itinerary? In part to try and find giant anteaters. I haven’t had much luck with them until now, and while I’d say the photo ops weren’t great, we did get a handful of sightings and chances to snap a few portraits in waning daylight.

There were, of course, numerous other wildlife sightings. We tallied 31 mammal species, and nearly 20 reptile species (a good number for a dry season trip). You’ll find the full photo gallery here. As always, a short preview is below. 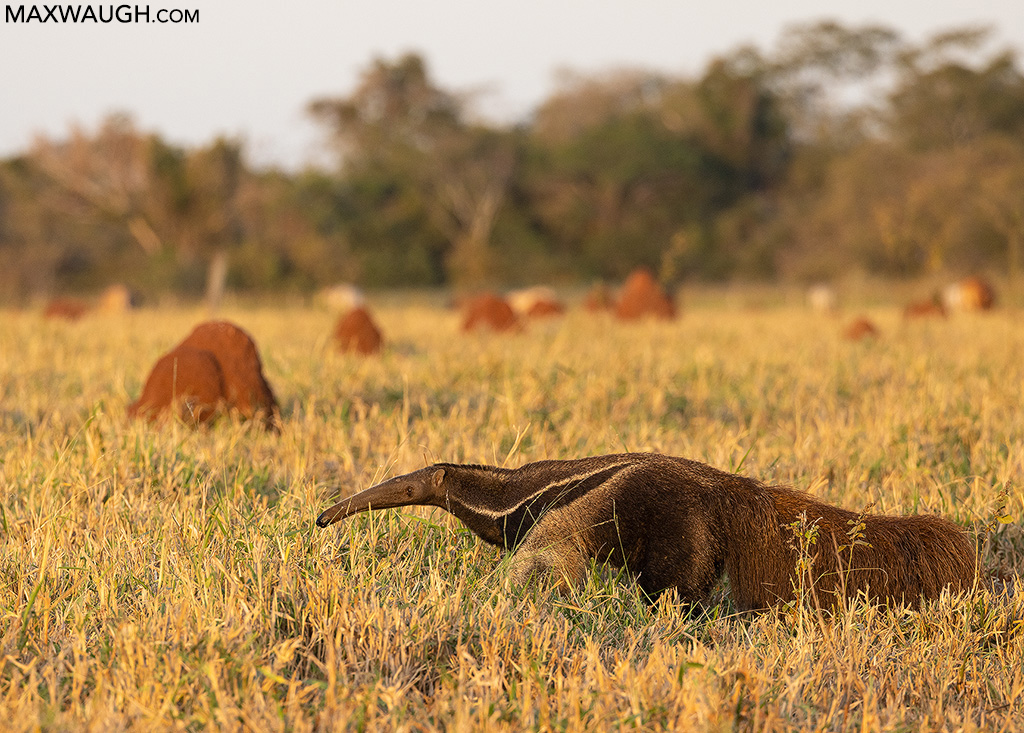 We visited the southern Pantanal in hopes of seeing giant anteaters, and were fortunate to have a couple brief photo ops. 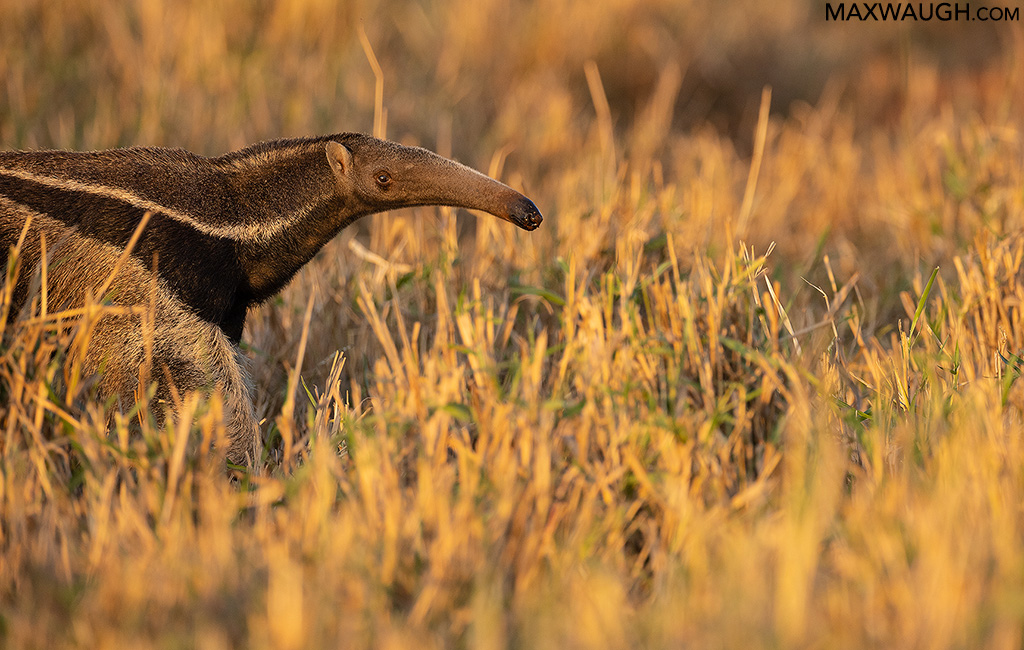 It was challenging getting clear photos of their faces, as with most insectivores that keep their heads low to the ground while foraging. 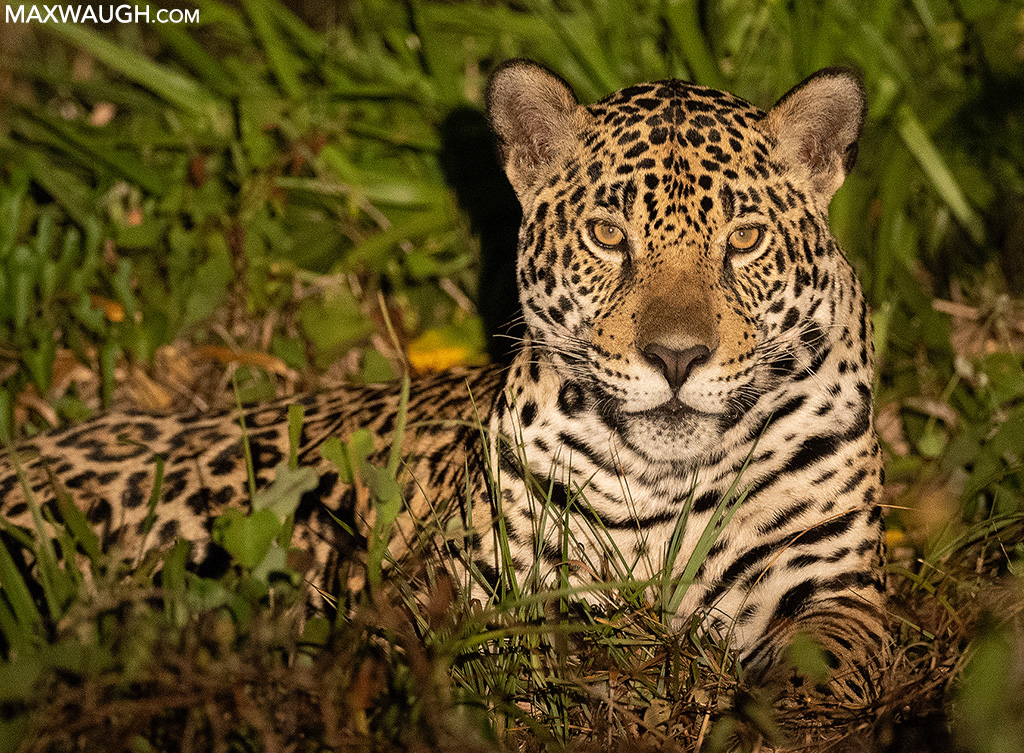 This was a somewhat special sighting… my first nighttime jaguar, which I spotted staring back at my flashlight in the southern Pantanal during a night drive. 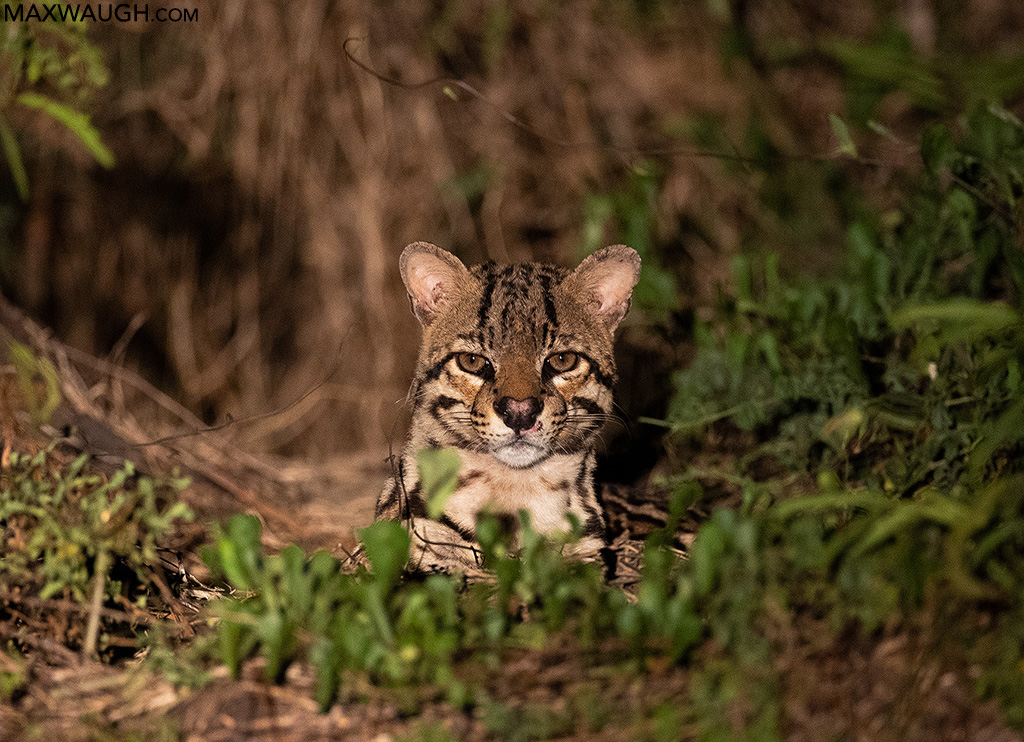 The southern Pantanal can be good for ocelot sightings. We saw a number of individual cats during our night drives there (getting pictures was more challenging).

It was cool seeing not one, but two false water cobras for the first time. They’re quite large (especially the female)! 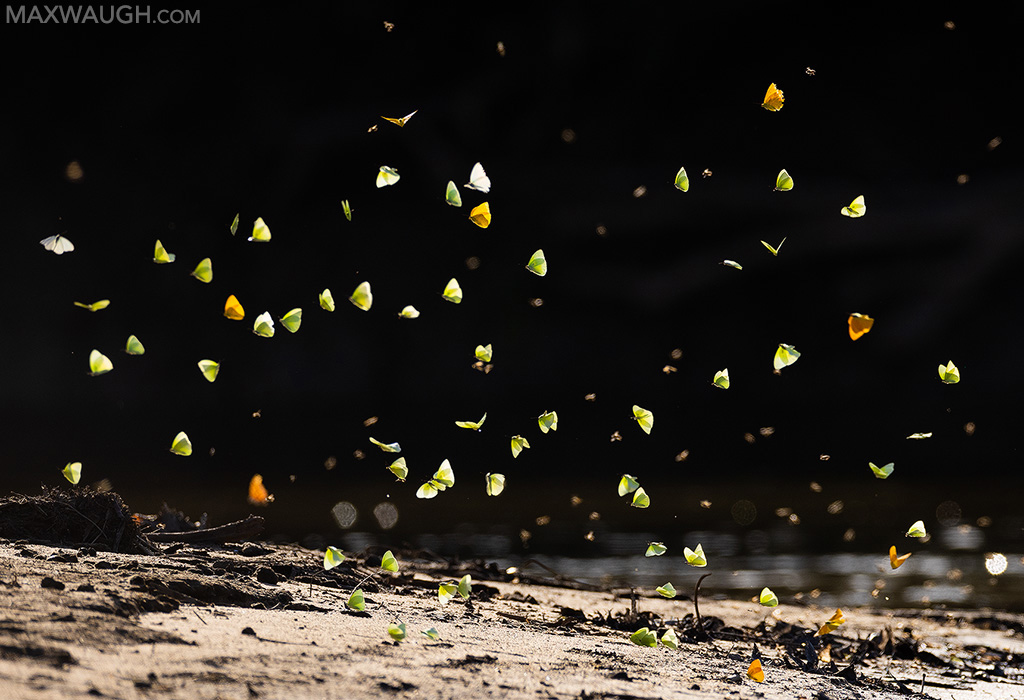 Sulphur butterflies often congregate along river banks in the Amazon to get minerals off the beach. 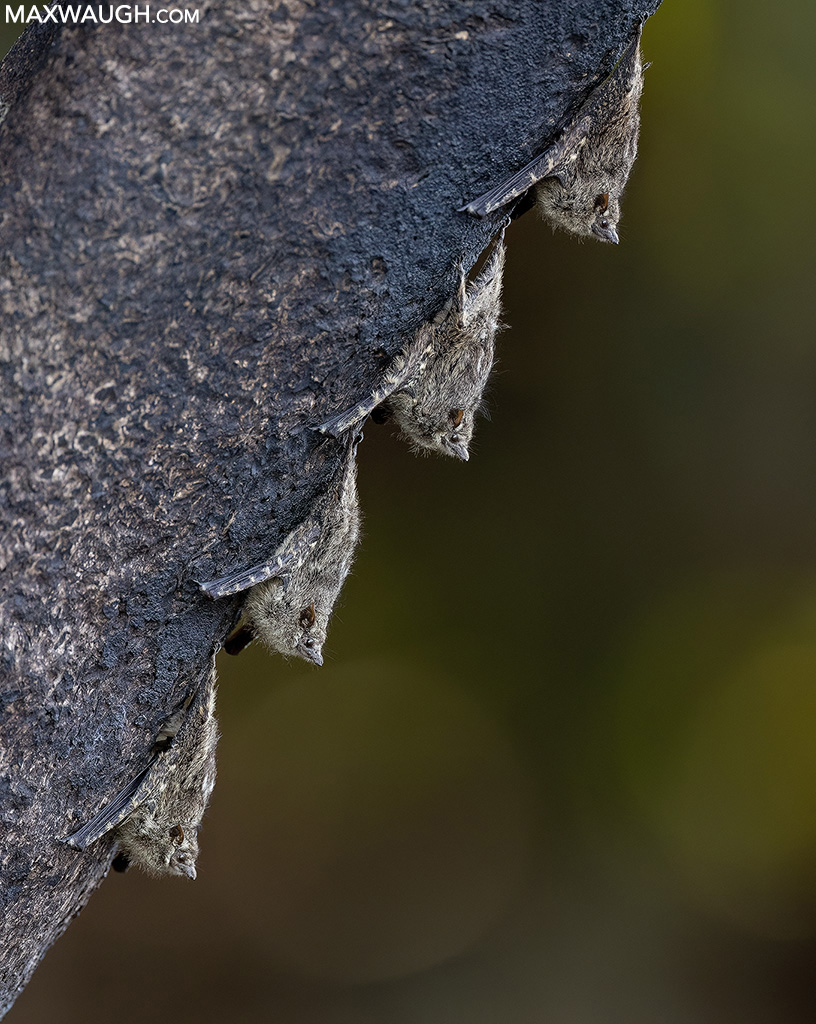 We often see the small, adorable proboscis (or long-nosed) bat hanging out in groups close to river banks. 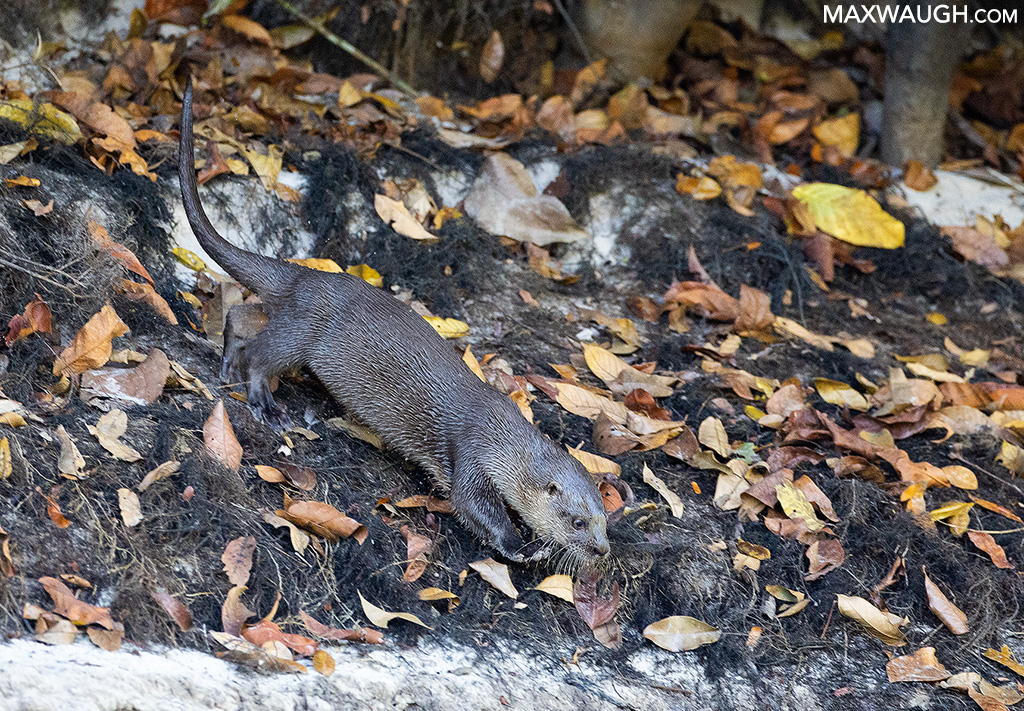 The smaller of this region’s two otter species is the neotropical river otter. We saw several of them in the Amazon. 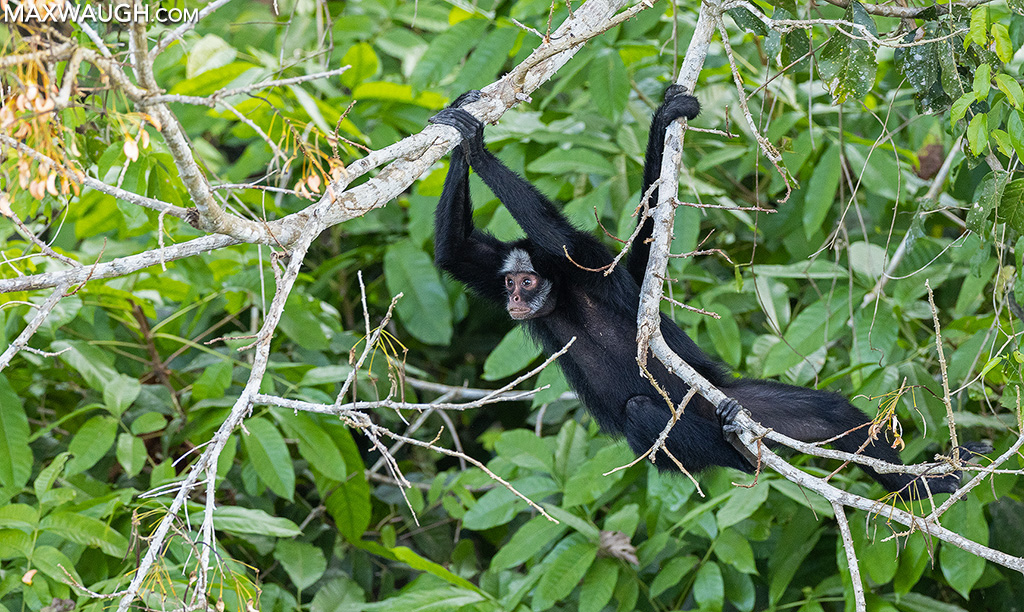 What a treat to see a troop of endangered white-cheeked spider monkeys come right up next to our position at the top of a 50m canopy tower in the Amazon one evening. 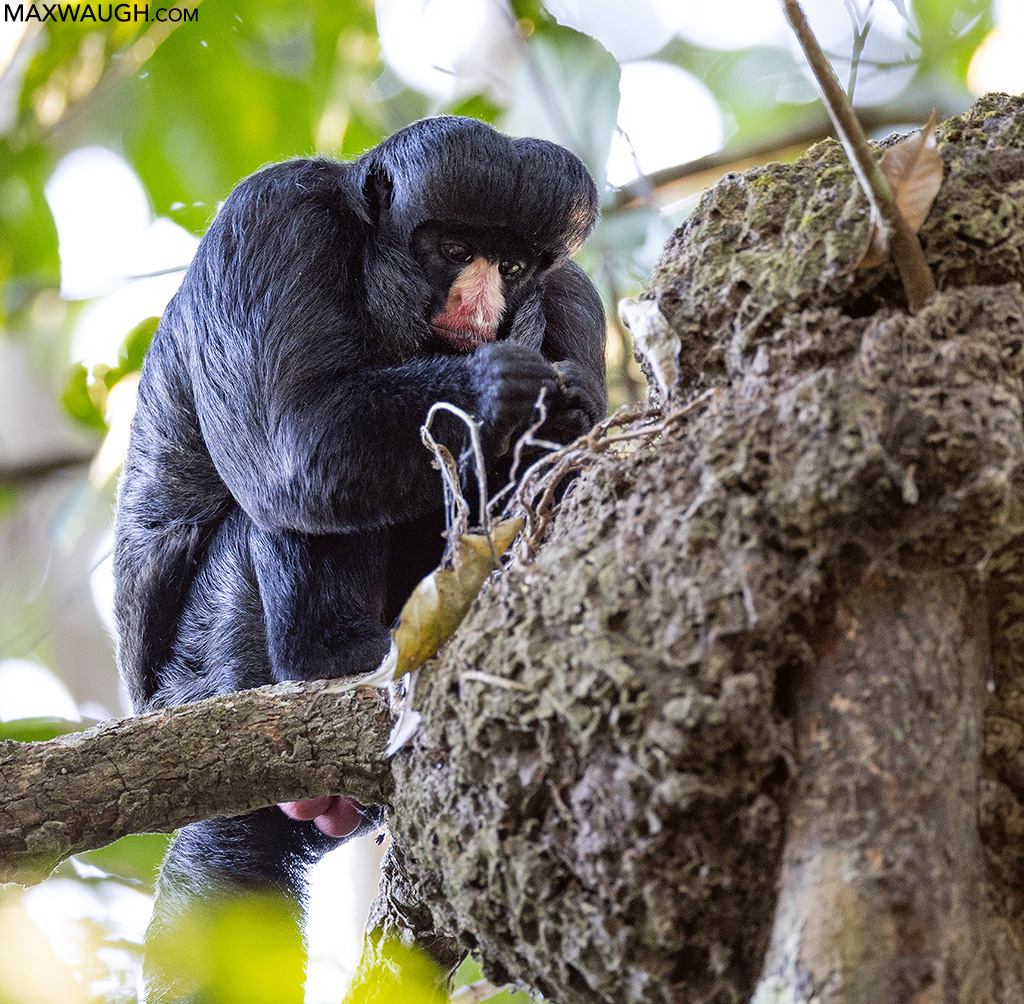 Another of the threatened, unique primates found near Cristalino Lodge in the Amazon is the white-nosed saki. This large male was tearing apart a termite nest. 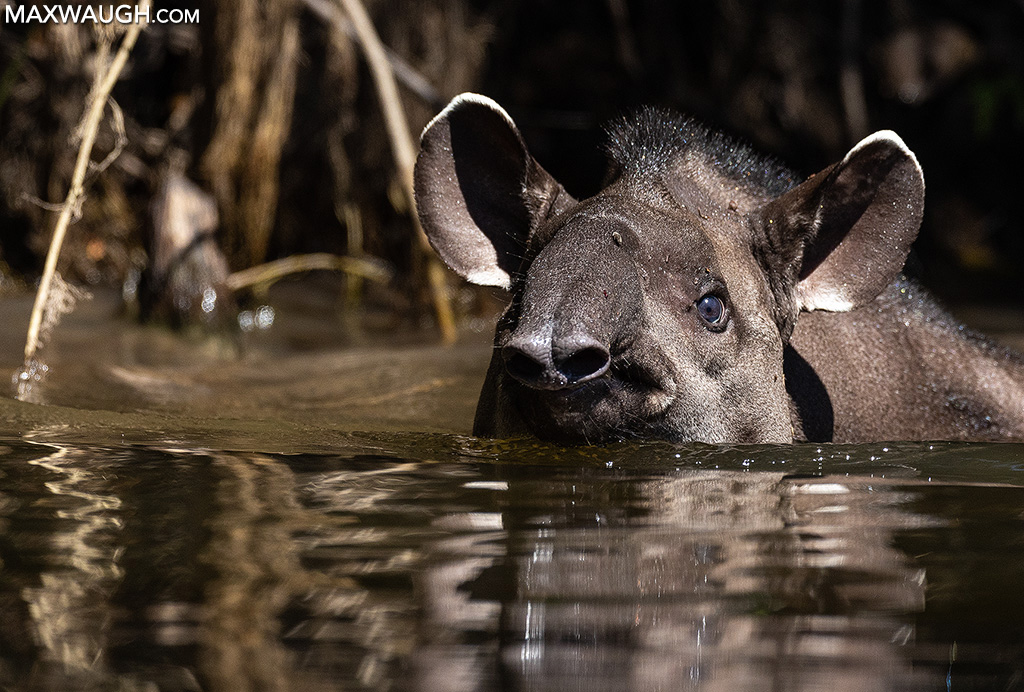 We were fortunate to have a few tapir sightings in the Amazon (and one brief one in the Pantanal). High temps brought them down to the river. 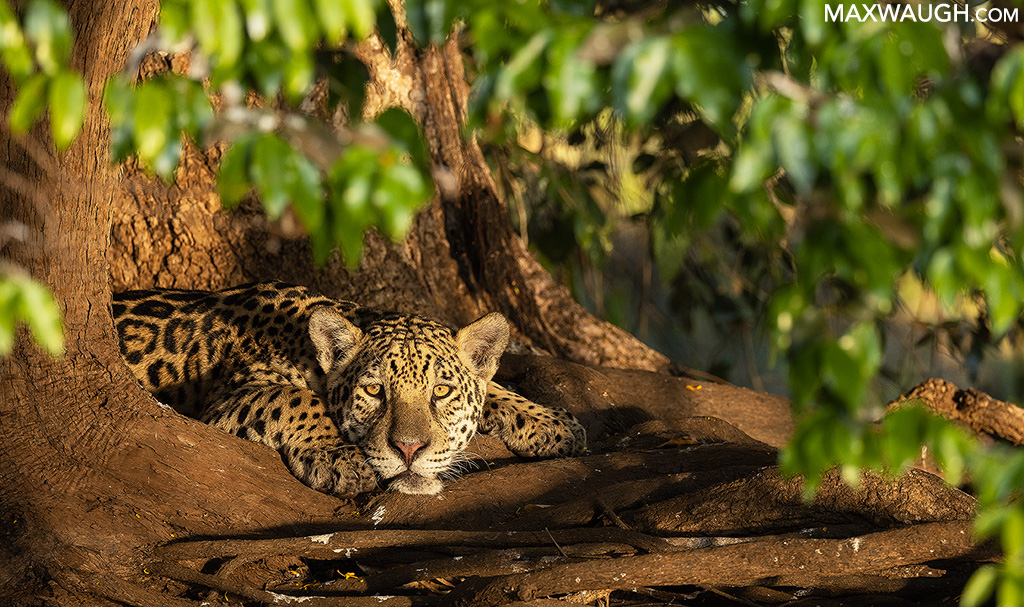 The main wildlife goal for most visitors to the Pantanal is the jaguar. It’s always an impressive sight, and we’re lucky to see them at close range on these trips. 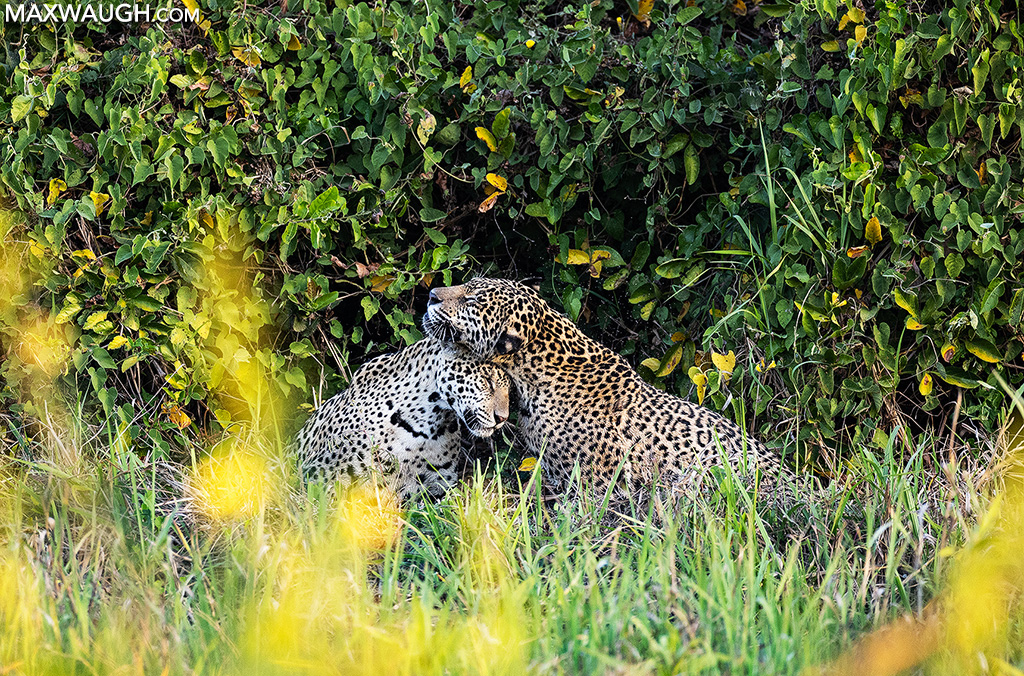 A touching reunion, as a young jaguar (left) reunites with its mother after being separated for more than a day following an attack from a large male.

The yacare caiman and capybara are two icons of the Pantanal. 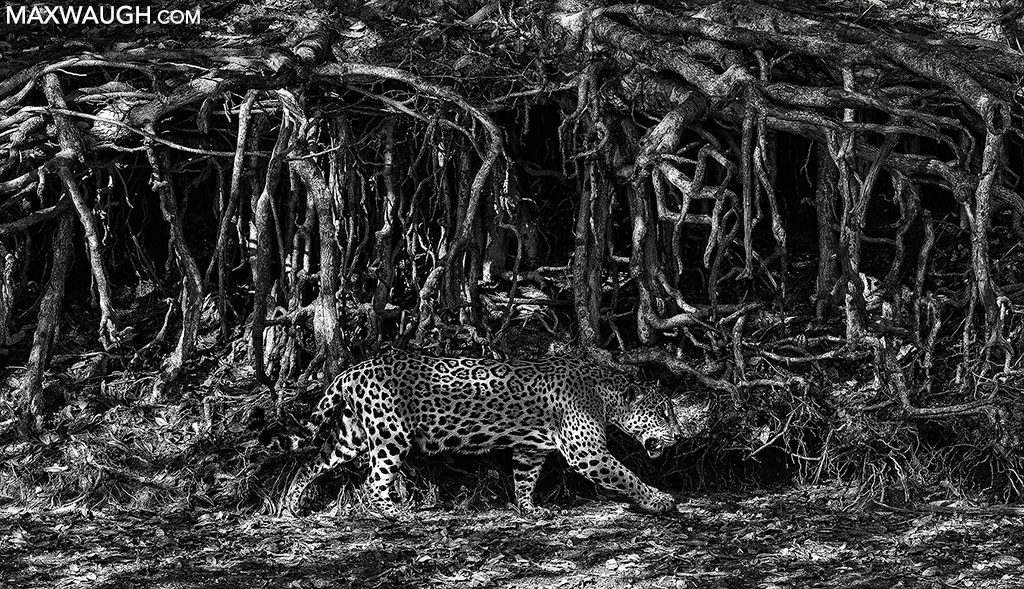 Four years after hoping to get a jaguar moving through this photogenic area, it finally happened! 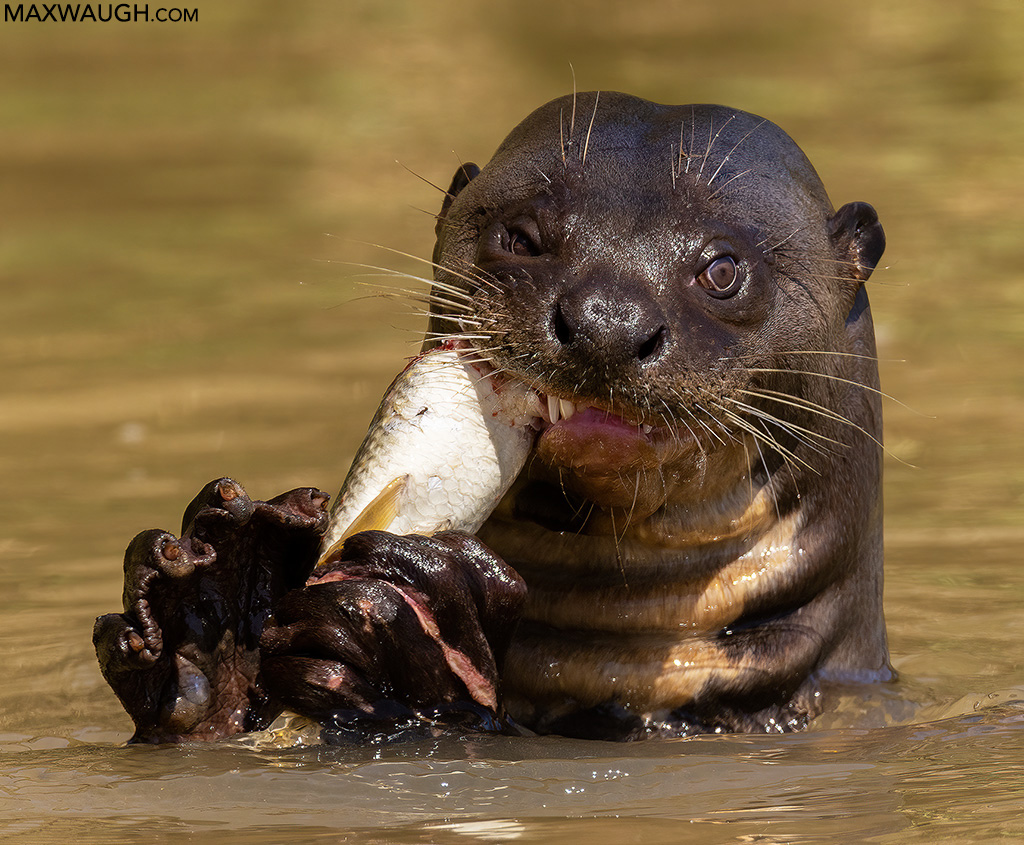 One of the highlights of any Pantanal visit is seeing giant otters. 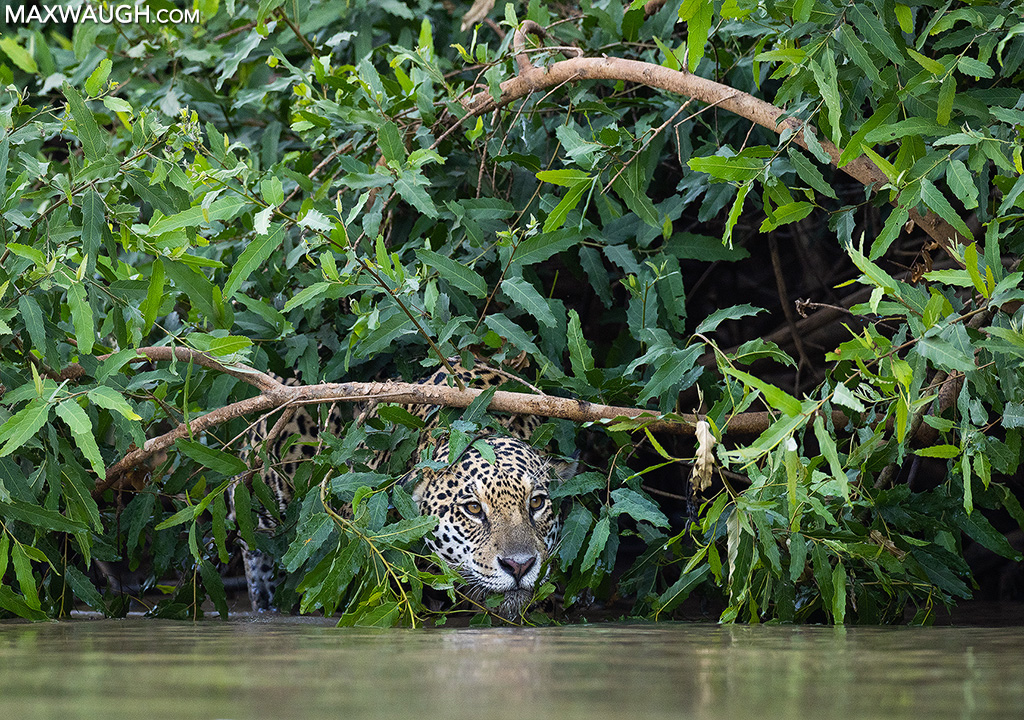 Jaguars are very comfortable in the water, since their main prey (caiman and capybara) is often found there. 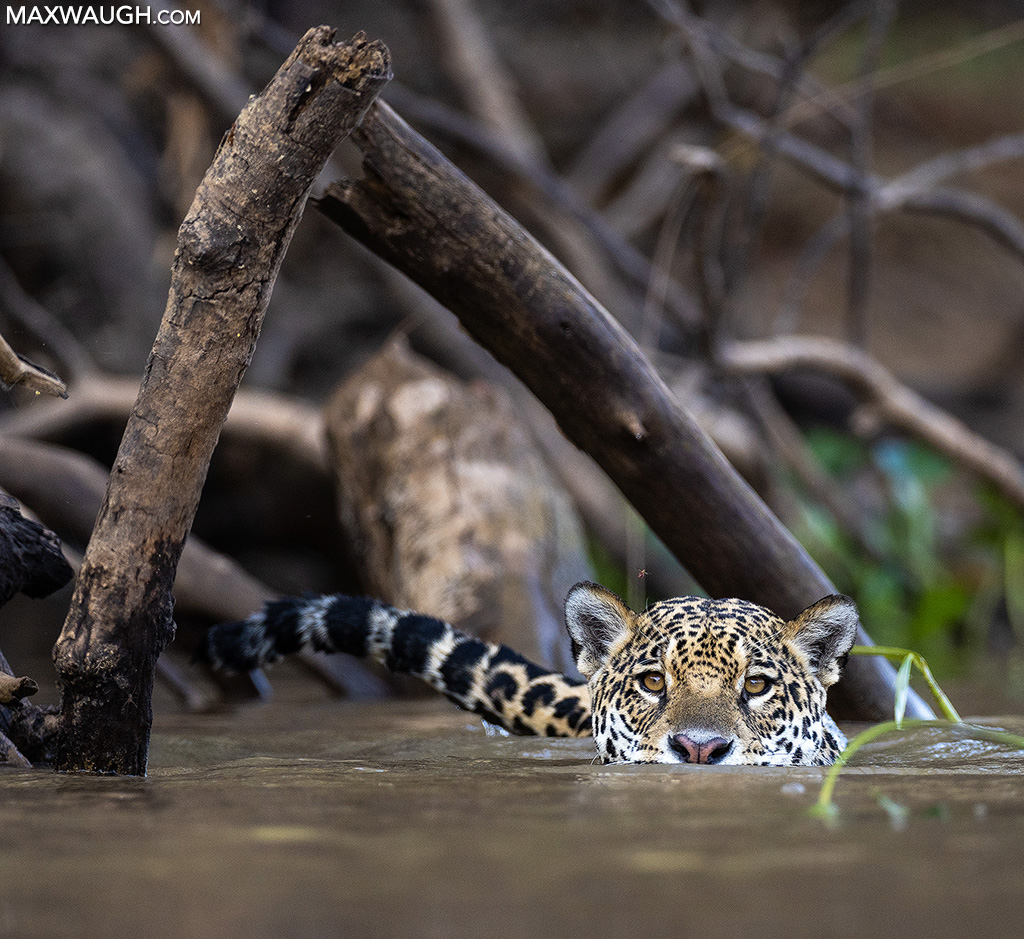 Jaguars are adept swimmers, practically a requirement in a Pantanal if they want to catch caiman.

Want to join my next Brazil adventure? It will likely happen in 2024 or 2025. I may even feature a new destination: the Deep Amazon! Get some general tour details and submit a waiting list request here.