Please note, this report describes the annual winter bison hunt (under the January 13 entry), and contains some images from the hunt. Though the images are not gory, some readers may find them disturbing.

I returned to Yellowstone as a stranger. Everything felt foreign and out of place after nearly a year away. It was already dark when I entered the park, there was more snow than at this time last year or the year before, and the post-flood road took me through unfamiliar terrain. In some ways it was an uncomfortable drive.

Along the way to Silver Gate, comforting, familiar scenes would emerge from the gloom: bison skidding on the pavement, a coyote hustling off the road up in the Lamar, a fox trotting in a snowy meadow at Barronette. Like a reassuring squeeze on the shoulder from a relative… “don’t worry, this is still home.”

By extension that also meant the deer and elk that were hovering far too close to the road were like the creepy cousins I didn’t want to run into.

Aside from the reconstruction, the park already offered up something else that was new and different to me: a nighttime pine marten scampering across the road near Soda Butte Creek.

Of course it feels good to be back after such an unexpected long absence. But I feel it may take a while to settle in. Driving down from the Northeast, I was yanked out of a familiar reality when the road approaching Trout Lake suddenly veered way to the right. A stretch of pavement I’ve driven hundreds, if not thousands of times in the past, irrevocably changed.

Though the post-flood repairs are remarkable in the basic nature of their efficiency, things aren’t back to normal quite yet. I find myself already ruing the diminished number of pullouts, and oddly find myself missing the Pebble Creek parking lot (closed due to construction equipment and a massive pile of dirt and rock) more than I could have ever imagined. It was nice having a bathroom, and a place to turn around, and overflow parking during busier wildlife sightings all in one spot.

The changes have made me feel a bit nostalgic, which was appropriate since the first familiar face I ran into on this trip was that of Cody, whom I hadn’t seen in nearly fifteen(!) years. It was Cody who invited me to his property back in 2008, where I landed my treasured first wild mountain lion encounter. 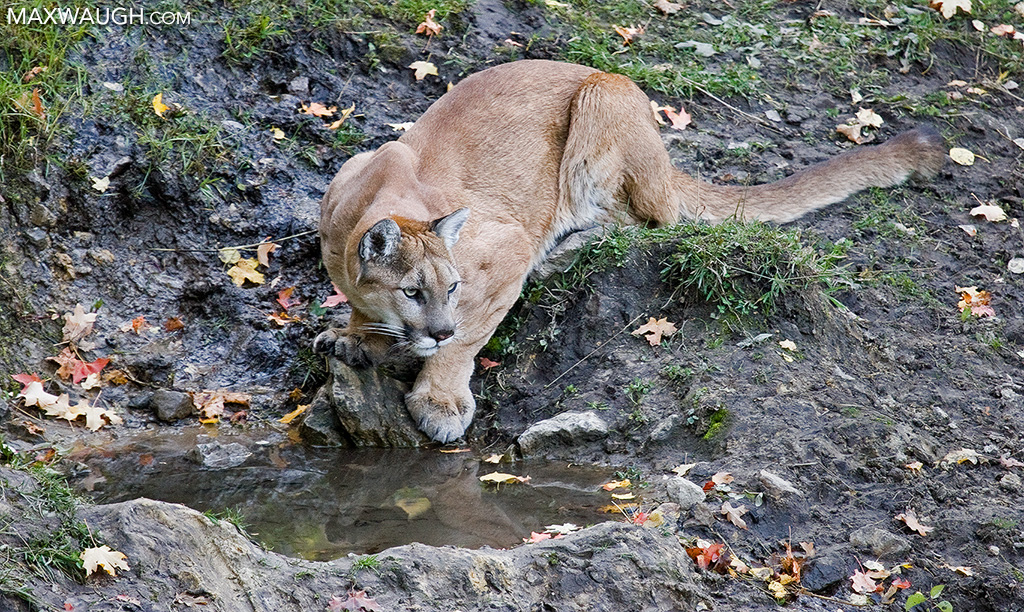 I don’t mind sharing this photo. As you’ll see, the trip had a bit of a slow start, so you need some sort of wildlife content. Plus, it remains my favorite wildlife encounter to date, so many years later.

The rest of the day gave me little reason to lift a camera. Moose were scattered throughout the northeast, bison were here, there, and everywhere. I actually ignored the first ravens I saw, for once.

At one point I popped out for a short forest walk, hoping for owls or the like. Plenty of squirrel activity, and though I used some fresh bison tracks to make my trudge through the snow a bit easier, I did my best to avoid getting too close to the couple of bulls grazing in an open meadow. I couldn’t find any owls, but did track down another Three-toed Woodpecker (a consolation prize I’ve collected several times in recent owl searches). 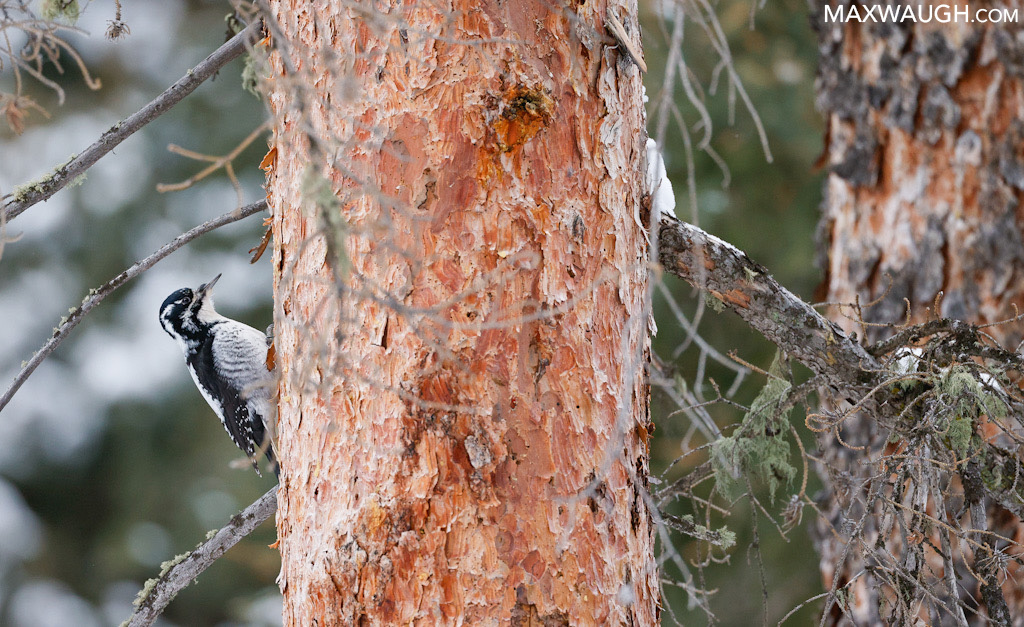 In the afternoon, a few more coyotes made appearances here and there, but I didn’t receive encores from the previous evening’s fox or marten.

Sleeping in wasn’t really sleeping in. I purposely avoided setting an alarm, but was still on the road as it started getting light at 8ish. In the eastern Lamar, there was finally an excuse to pick up my big lens. Two bull moose were sparring in the distance. The 1.5:1 anter-to-moose ratio was far better than anything I had seen on Thursday.

With the northeast being so quiet, I chose to go west, all the way to Mammoth, where I… purposely went to a thermal area???

Not necessarily for the thermals. Well, sorta. I figured if I was in the area, I may as well stop and check the terraces for bird activity. Birds will scour thermal runoff for insects, and last year we got some magpies here (an encounter that produced one of my favorite shots of the year). So it made sense to check the spot.

Mammoth’s plumbing is constantly changing, as evidenced by the complete absence of one of the more colorful active cascades we’ve seen here in recent years. Now it was all under unmelted snow. At the end of the boardwalk, I still found my steamy runoff… and there was a magpie! 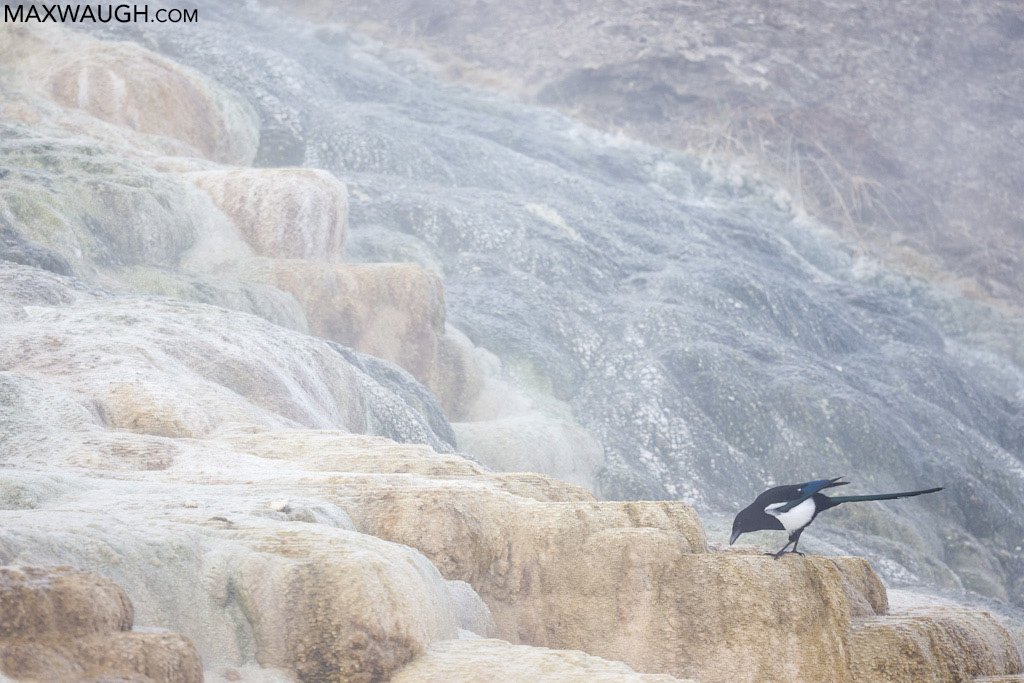 I would have preferred more action on the taller, more picturesque terraces, but that area also showed streaks of bleached white and light orange… the birds were finding their meals in the darker, greener formations in the distance. Maybe next time.

Once they flew off, I continued my westward journey out of the park. Following the Old Yellowstone Trail out along the boundary, I was soon spying the familiar winter clumps of pronghorn, and eventually a large herd of bighorn sheep. But man, there were a lot of bison too. As usual, my mid-January visit coincided with bison hunting season.

The following portion of this report discusses the bison hunt. It contains a couple photos that, while not gory, some readers may find disturbing.

I thought perhaps I had missed the hunt at first… but I simply hadn’t driven far enough. The first clue was a set of hooves sticking out from under a tarp in the back of a truck. 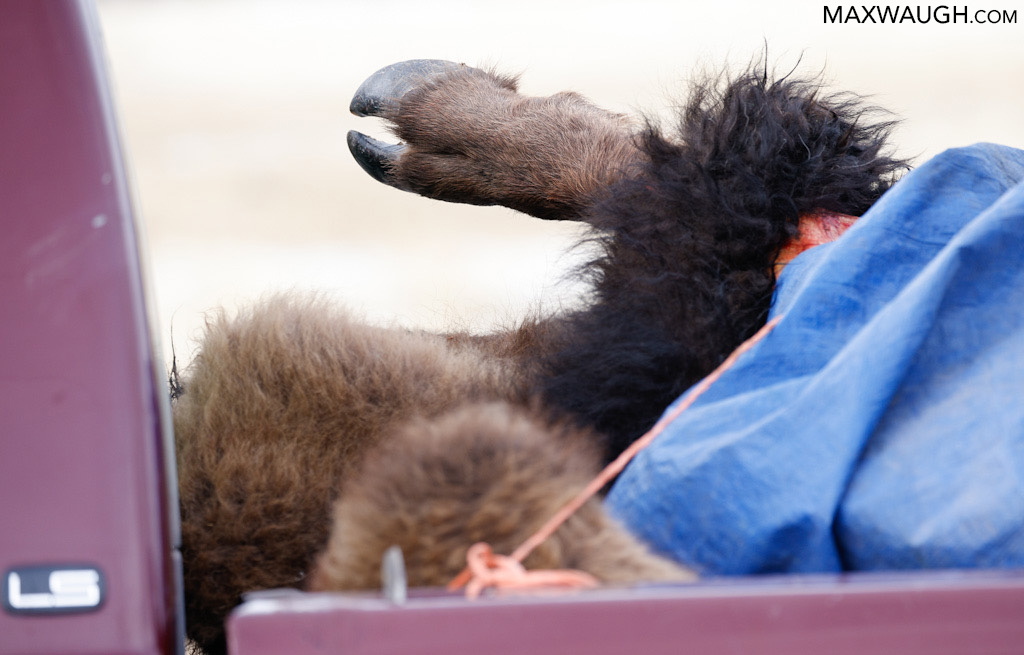 Eventually, gut piles. And toward the end of the road, there were suddenly trucks parked everywhere. There were just as many law enforcement vehicles as those belonging to hunters. Only a few years ago, it was a bit like the Wild West out here during hunting season (stories of people ducking behind vehicles as bullets whizzed overhead)… now, it seems calm and organized.

Despite the fact that my winter trips often coincide with the hunting season, this was actually the first time I’d ever driven this road while hunters were active. I pulled up just as a man walked up a hill, took aim, and shot a bison.

Most participants in this hunt are descendants of First Nations or members of western tribes. The Yellowstone area has historical ties to numerous native communities, few of which took up permanent residence in the area we now know as the park, but many of which relied on the region for its resources. They come now to renew their ancestral rite each winter.

I took this scene in with equanimity. Though it’s disturbing to see a great animal ceasing to exist, I could also sense (watching from 200 yards) the import and meaning of this action for the man who had made the kill. And I was at peace with the fact that these hunters—the scene was repeated over and over across the hillside—would make good use of their bounty.

Yes, I ate my lunch after that, while scouting a few locations along the Yellowstone River for additional wildlife (it was impossible to tell during a quick recon if the floods had any long-lasting affect on the species that called it home last year).

After completing my loop back in Gardiner, I re-entered the park and headed for home, stopping only to say hi to and chat with friends on the way.

A distant coyote in the Lamar whizzed past as I drove east. Silver Gate was as peaceful as ever.

Have you ever wondered what it’s like in that first half hour or so as I drive into the park each morning?

Technically, it’s not 100% silent inside the vehicle. The stillness is interrupted by an intermittent chrrrrsh as I crane my head from side to side and my poorly-shaven face brushes against my jacket collar. Looking left, right and ahead in hope of spying something interesting. Chrrrrsh. I don’t even play music. There’s something peaceful about this ritual.

Inside my head? It’s a totally different story. From the moment I step out on the front porch, my mind is buzzing and bouncing all over the place. Like a gerbil who’s  had about five too many Froot Loops.

I wonder if that Great Gray will ever show up in our meadow.
Any fresh fox tracks in the driveway from last night?
Any moose in the creek?
Chrrrsrh.
Hmm… I wonder if J & G’s marten is back this year.
Last year we had ermine tracks here at the entrance.
Remember when someone saw a lynx here fifteen years ago? History could repeat itself…
Chrrrrsh.
Ooo… Warm Creek. Is it my turn to see a porcupine?
Hmph. No tracks in that always-pristine meadow. Again.
…you’re an expert in a dying field… whoawhoawhoa… (music is still playing in my head, apparently)
Chrrrsh.
Is the resident fox still busy this morning?
If MacNeil saw a wolverine here, why can’t I?

As you can tell, wildlife photographers are imaginative. And hopeful. And delusional. We’re dreamers.

Today’s dreams weren’t realized, unfortunately. Perhaps by folks who stayed west (wolves), but not for me in the east. It was nice to meet up with a few more friends. If Yellowstone is good at one thing during even the slow times, it’s reuniting folks who have shared previous adventures in places like Utah, Alaska, and even China.

I had to return a bit early today to prep for tomorrow’s client pick-up. As I was just entering Round Prairie, a long-tailed weasel sprinted across the road (in the exact same spot where we had two of them three years ago). I was somewhat fortunate. Despite the disappearance of several pullouts due to the road reconstruction, I had one just ahead of me. It took a bit of time to discover the tracks after I had parked. 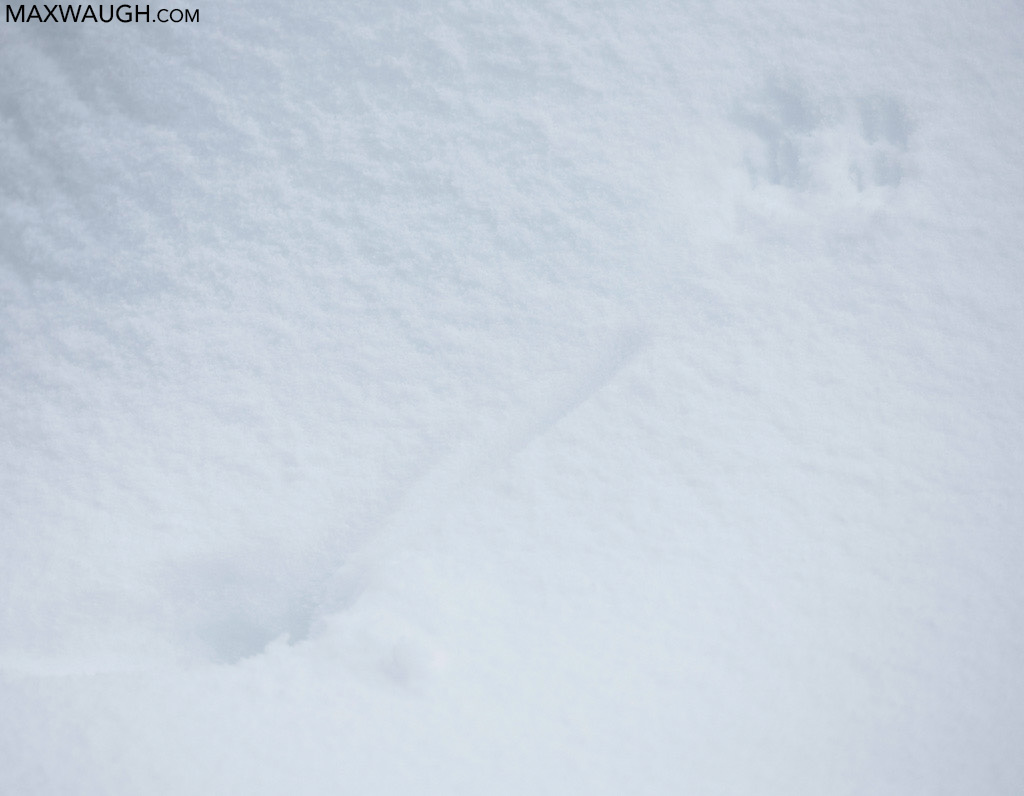 The tracks led into a massive pile of deadfall down near the creek (flood trash), but from my angle they didn’t appear to reemerge anywhere. There was a good chance the critter was still there, and could pop out again at some point. Unfortunately, my time was running low (and fortunately, I’ve had some nice weasel luck in recent years, including a prolonged session with a stoat in Mongolia a couple months ago). So I was able to walk away without hanging my head. A nice sighting, new information to file away for next week…

A final drive all the way to Cooke City yielded no further sightings, so I returned home. Before heading in, I took some time to trudge around the property a bit. It wasn’t easy assessing post-flood damage with knee-high snow on the ground, but it appeared we were pretty fortunate.

Okay, this prologue is over. On Sunday, I’ll be picking up my first tour group and we’ll head into the interior on Monday. Here, kitty kitty…