Client pickup day! Silver Gate finally had a fresh coat of snow on the car (and the ground). The fox had been through in the night again.

My drive through the park was only interrupted once, when a nice bull moose (still had his antlers) crossed the road in front of me at Round Prairie. 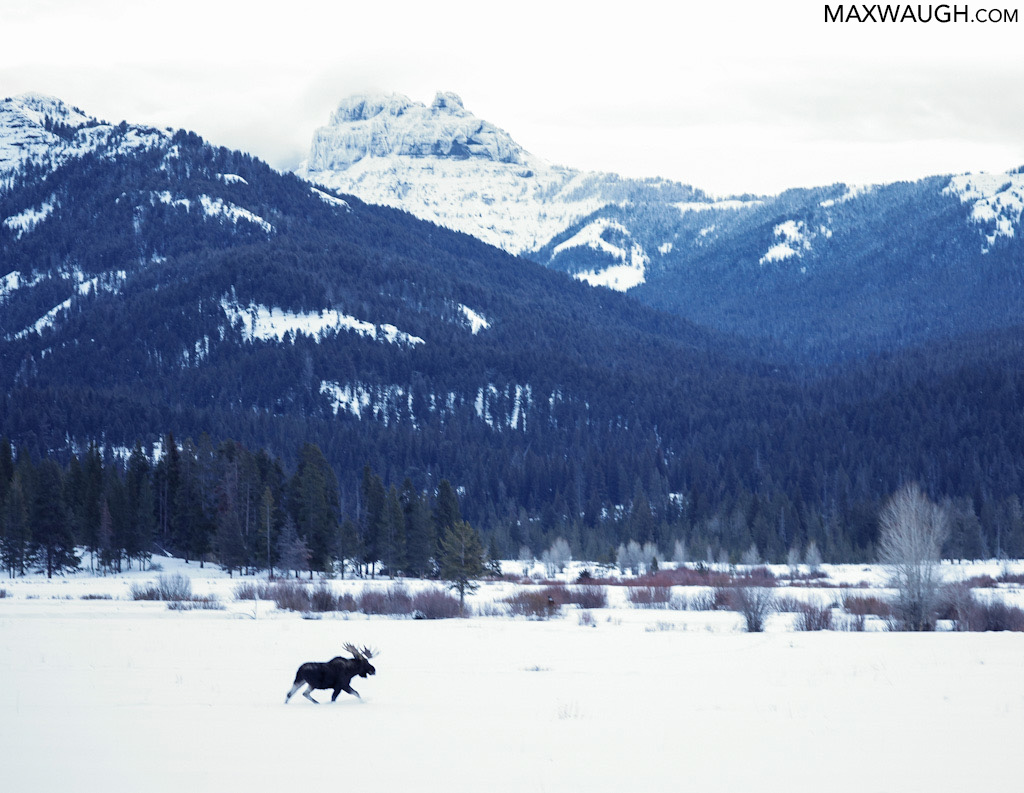 Otherwise, the trip was uneventful. I hit all my stops on schedule, and met the clients for my first tour in Bozeman. I’m pretty fortunate, as this group is returning after coming together as strangers during my first tour last year… they all wanted to do it again!

On our way south, there was a roadside Golden Eagle on a deer carcass, but even after parking safely off the road a good distance away, it took to the air the moment anyone stepped out of the vehicle.

We arrived in West Yellowstone, enjoyed the traditional Welcome Dinner, and returned to our home base to prep for our first day in the park interior.

So let’s talk a bit about my Yellowstone bobcat curse.

First, it’s important to understand that I have photographed bobcats. In California. I have also seen bobcats in Yellowstone. Four, in fact, starting with my first winter trip in 2008 (the “Blobcat,” a blurry photo taken outside the park that is my best of the species to date on a YNP trip), and most recently a pre-dawn sighting during a tour a couple years ago, which ended abruptly when the cat disappeared the moment I turned to summon my clients. Last year, with this same group of clients, we were (in)famously photographing a raven while a bobcat randomly showed up near the road in Little America.

It was actually around 2007 or so that I became aware of the possibility of seeing bobcats in the Yellowstone interior during winter, especially along the Madison River, but I didn’t make my first snow coach trip south until 2010. Within a couple years I was leading tours, and soon began targeting the Madison corridor in hopes of finding one of the park’s elusive feline species.

I wasn’t having any luck, even as I rearranged my tours—moving our interior home base to West Yellowstone so we’d have more opportunities to explore the Madison—specifically with bobcats in mind!

The Madison paid off in other respects… great bison photo ops, weasels, and an all-time wolf encounter highlighted tours I led there. But we never saw a cat. In fact, a pattern began to emerge: my tours were always scheduled a week before or a week after bobcats were seen and photographed along the river. And I was missing some fantastic sightings… many of my friends and peers came back with incredible shots.

Thankfully, I was never too annoyed or overly frustrated with this. Let’s face it, I can’t complain too much about my overall luck with wild cat species, or with my Yellowstone luck over the years. If anything, I grew more determined. We would keep spending time in the interior. We would keep exploring the Madison, plowing through deep snow during frigid mornings to look for fresh tracks at the river’s edge over and over… until my luck changed. This was a quest that played out during tours, but it was obviously very personal after over a dozen years of futility. Thankfully, not a single tour client over the years said, “No thanks… not interested in bobcats. Let’s go find swans instead.”

This past week offered a glimmer of hope, accompanied by a mild feeling of dread. News and photos leaked of a bobcat in the interior (not on the Madison) that was seen on a fresh carcass. A reason to hope… except that it was discovered a full week before I was scheduled to be down there with my first tour group.

The hope came from the fact that the cat was on a deer carcass. That’s a lot of food for a single bobcat. I thought back to another bobcat/deer event in the park, around fifteen or so years ago. That cat stuck around for several days, and possibly over a week. I used this hazy memory to convince myself we had a chance with this new sighting.

Of course, the cat could disappear at any moment, especially if any other scavengers (particularly coyotes) found the kill.

Each day crawled by, and each day I saw new photos or reports from other photographers. The cat was still there. Counting down to my tour… three days left, two, then one.

By this time, I was getting a lot of encouragement from my fellow photographers, who by now knew my non-history with the interior bobcats pretty well (probably because I moaned about it a lot). Folks seemed convinced I was going to get it. I just didn’t want to think too much about it. It brought to mind an ill-fated park week I spent in the spring of 2010, when I kept checking in on a wolf kill for six straight days… always arriving too late or leaving too early to see the wolves come and feed. On the final day, I chose to stay all day—I was not going to miss those wolves—which of course ended up being the first time in a week they never showed. There was absolutely NO guarantee the bobcat would still be there when we went in on Monday morning.

Our coach arrived at 7am… still dark, of course, but a good time to be one of the first groups inside the park, lest there be any wildlife near the road that hasn’t been spooked by traffic.

It was darker on this particular morning because snow was falling. As I noted in the northern range, there is also more snow this year in the interior. And it’s gorgeous… a true winter landscape.

This actually prevented us from running our usual morning drill on the Madison. For some reason, many of the pullouts are in rough shape and not accessible by snow coaches. That, combined with the darker conditions, made it tough to do any reconnaissance along the river. From what we could see, the landscape and fresh powder were largely unspoiled.

Which meant few stops along the way… and that meant we were going straight for the cat. We did arrive first on the scene, but were forced to walk a half mile in to reach the site. Just as we were getting geared up, a snowmobile pulled up next to us. Its rider spoke briefly to our driver.

I was ready to joke, “she said the cat is gone, right?”

Almost immediately, our driver came to us and uttered, “she said the cat is gone. No tracks, even.” He was serious. Sighs all around.

Screw that. We were still going. We had to see the site for ourselves, and might be able to discover something she had missed. So we continued to prep.

We made the trek through the white fluff mostly in silence. A Bald Eagle soared over the canyon ahead. Attracted by an abandoned carcass? We were too far away to tell.

Directions weren’t difficult to follow, and I soon recognized the carcass location from the pictures I had seen. By now the deer (what was left of it) was almost completely buried under snow. We could mostly just see one leg. There was indeed no bobcat at the carcass… and my desperate hope that maybe the cat was pulling a Skywalker and sleeping inside the carcass was dashed.

There was a noticeable trail leading up the hill. Sure, it wasn’t fresh, because a few inches of powder had settled overnight. The bobcat had left the carcass sometime the previous evening, most likely. The only question was, would it still be lingering in the area?

I tracked the trail upward until the snow met the massive rock wall above (the deer had plummeted hundreds of feet to its death!). In that moment, I ended the bobcat curse. 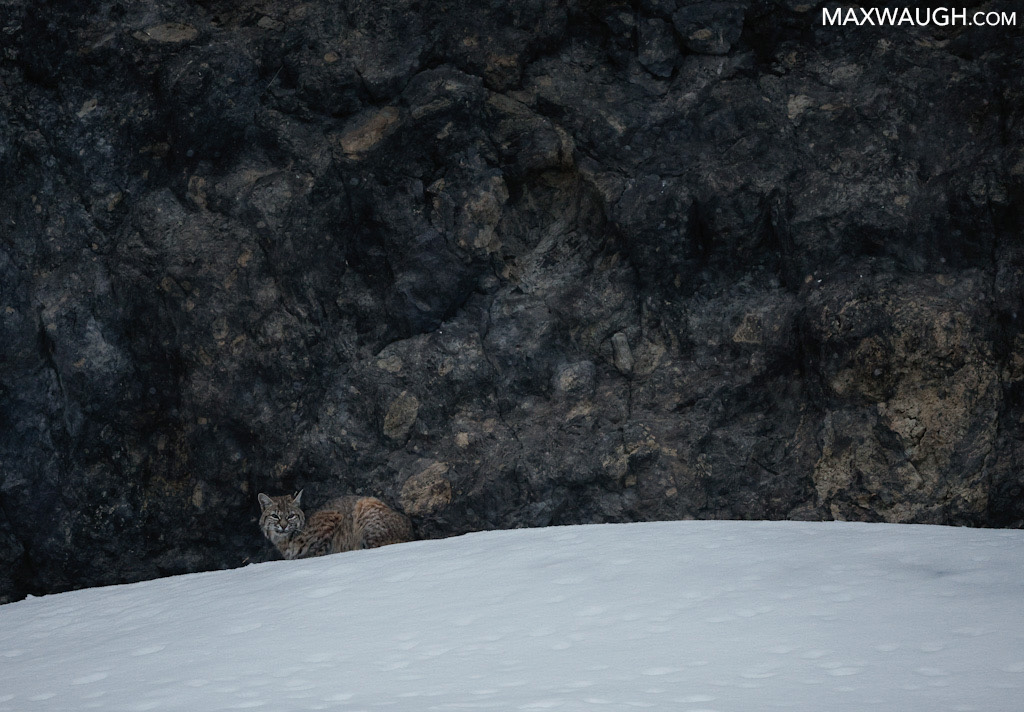 I’m fairly certain I mostly felt relief. My clients were excited though, which was awesome. For some, it was their first-ever bobcat. For all, a massive goal fulfilled.

We soon realized we were doubly lucky. Because the cat went up to hide from the elements, we had an opportunity to photograph it in a somewhat unique setting (since it’s mostly been seen guarding the carcass all week). The snow was still falling, which was both a blessing and a challenge… flakes can easily mess with autofocus, and often block key details on a subject’s face.

A couple of times, the cat stood before settling back down. But eventually it got up and stretched. It was going to move.

Our next stroke of luck: the bobcat was returning to the carcass, meaning we’d get it moving downhill through that beautiful fluffy snow. 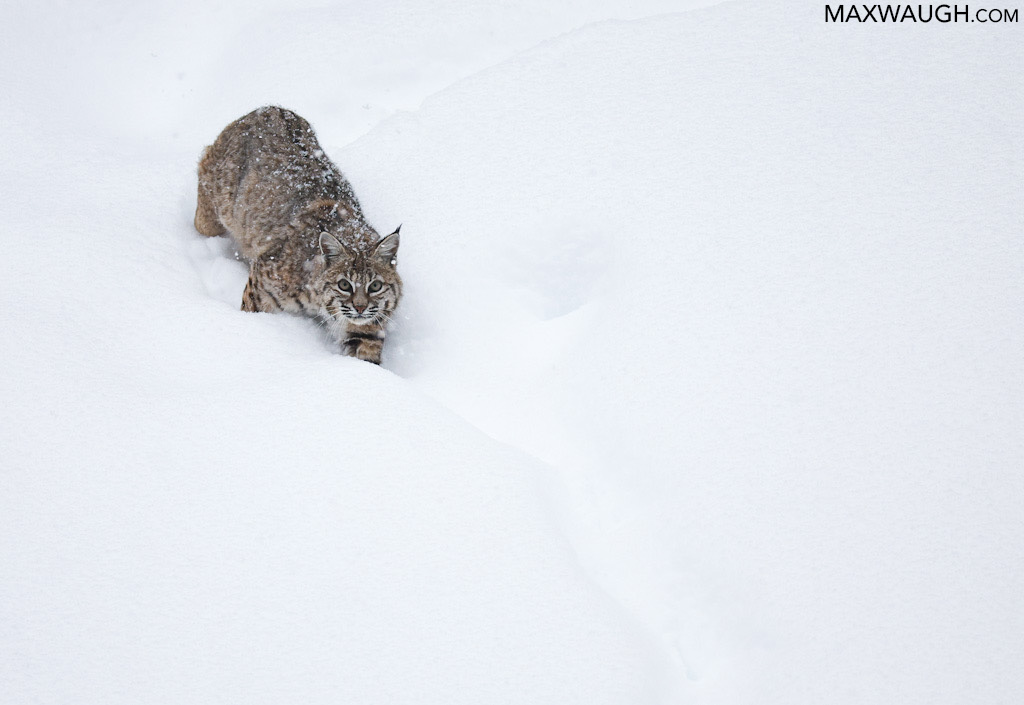 It was always those walking cat pictures along the Madison that really made me feel like I was missing out on something special… and we finally got a chance to document our own version.

Suffice it to say, we returned to the coach a happy group. Everyone was buzzing. One client exclaimed, “I feel like I’m on mushrooms!” 1 Which is the best tour testimonial I’ll probably ever receive.

There was one bit of unfinished business. Not everyone made the hike down. Due to a bum knee, one guest had remained at the coach, so we vowed to return in the afternoon when coaches were allowed onto the road to give them a chance.

The next few hours are a blur. We went all the way to Old Faithful, stopping here and there for a bison. Nothing so dramatic as some of the outstanding bison photo ops we’ve had on this stretch in recent years, but it’s always worth stopping the coach and seeing what’s possible. 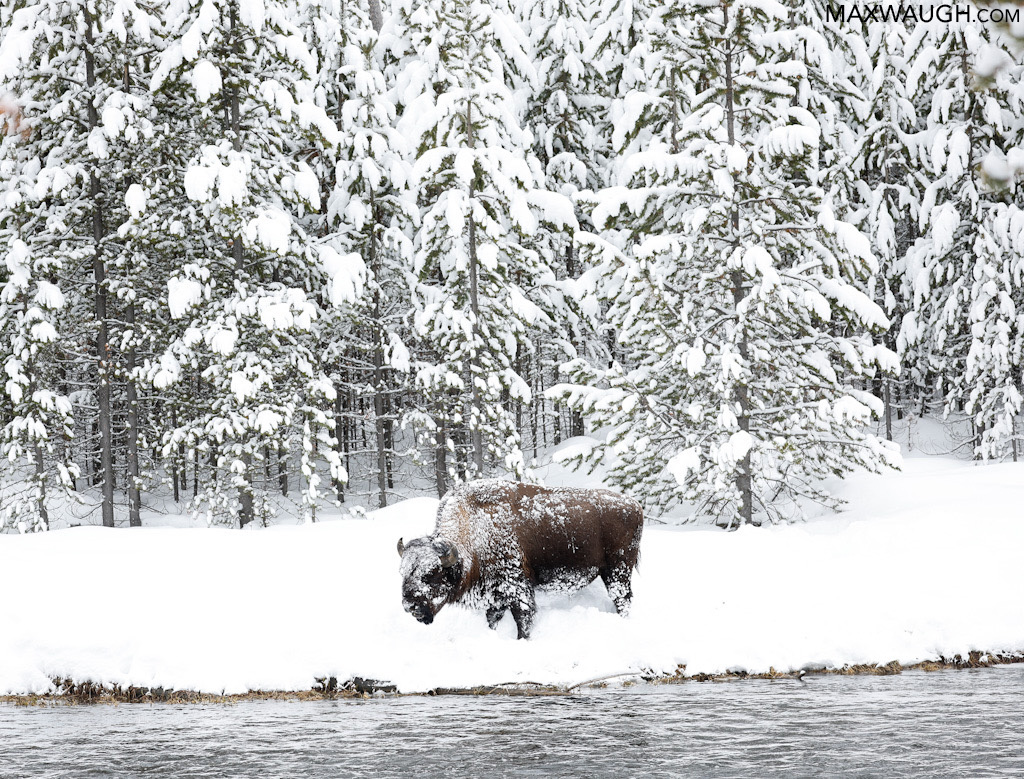 We hastily downed our lunches as we returned to Bobcat Central. The road was open for us, so we drove down to the spot. The cat was still in place, parked above the carcass. So now everyone had their bobcat, and we could truly celebrate. Those of us who were there in the morning could enjoy the fact that the snow had stopped falling, making it easier to get clear pictures in better light. 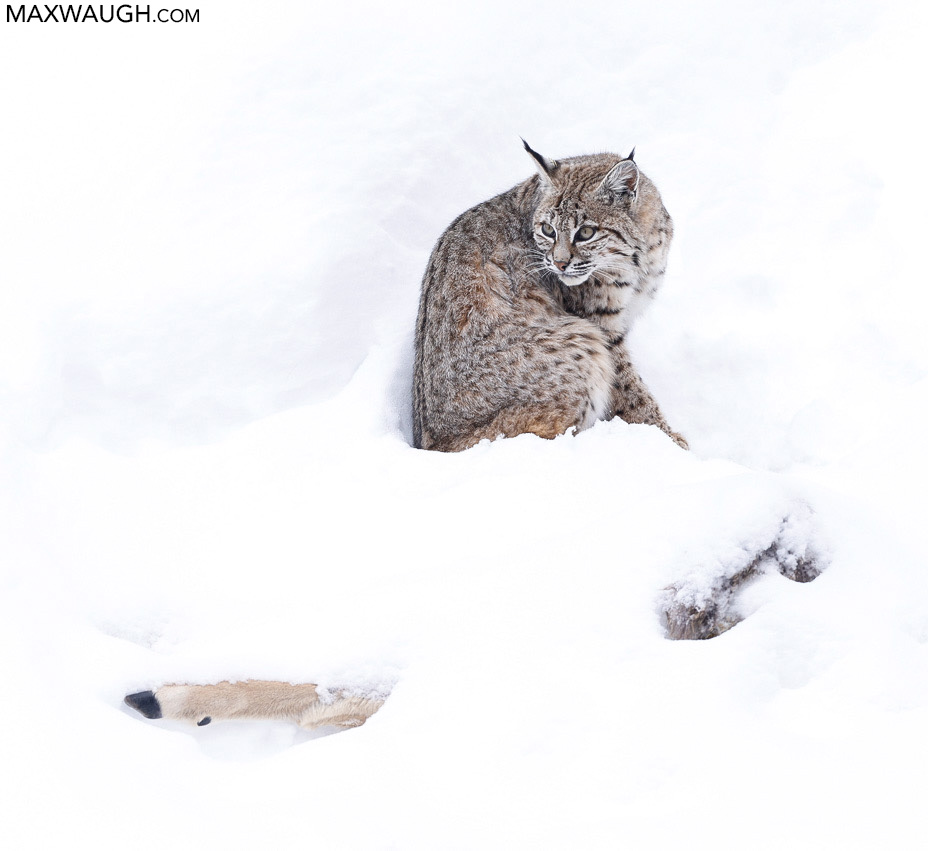 We hung out for a couple hours, waiting to see if the cat would move, but it remained stationary aside from the occasional stand, lick or stretch. Some Mountain Chickadees distracted me for a short time, and we took the opportunity to chat with others while the cat rested.

It can’t be overstated how fortunate the circumstances of this sighting are. It’s a large meal for a smallish predator, giving many people a chance to witness this rare sight. It’s in a remote area that doesn’t attract much other wildlife activity (therefore keeping other larger scavengers at bay). And for viewing, it’s ideally situated across the river, far enough to make the cat comfortable with an audience, but close enough for folks to still land some outstanding photos.

What a great way to bring my longest ongoing Yellowstone saga to an end!

(Big thanks, by the way, to all the well-wishers on social media. Since I spoiled the news of the ending of the curse in my Instagram Stories, I’ve received a lot of hearty congratulations. Everyone seems so happy they won’t have to hear about this ever again.)