We were still coming down from our bobcat high on Tuesday, but as a guide I can’t rest on my laurels. Already, attention was turning to all of the other species folks wished to see: fox (which this group never had last year), otter (only a distant photo op on the way to the airport last year), and weasel. No, we didn’t check them all off the list. If only this gig were so simple.

So, as tempting as it would be to just hang with the bobcat in the morning if it was still around (turned out it was, and it put on a very nice show for those who were there), we had to make some time to explore elsewhere in the interior. The plan was to head over to the east side of the park.

We were first at the gate, and as a result were greeted by a frosty herd of bison lounging in the middle of the road along the Madison. There were no other wildlife delays as we turned north at the junction, and east at Norris. Today was much colder (negative temps in some places), so it was bright and sunny by the time we arrived at Canyon.

After checking for martens without success, we aimed for Hayden Valley. Signs of otter activity were found on the northern stretch of the Yellowstone River, but it wasn’t until we approached Otter Creek that our driver Darren and I both spotted distant movement in the river. A slinky silhouette climbed out of the water… we had found the otters after all.

They were moving at a leisurely pace along the river, but it took some time before we could find a spot where the river wound close enough to the road, and where there wasn’t too much tree interference. Eventually, our patience paid off and the otters came into view.

They spent a fair bit of time diving for small fish. Occasionally, they’d crawl out onto the ice… or three might disappear, leaving the remaining youngster chirping worriedly, wondering where its family had gone. At times we could see them swimming under the surface of the ice, which was very cool. 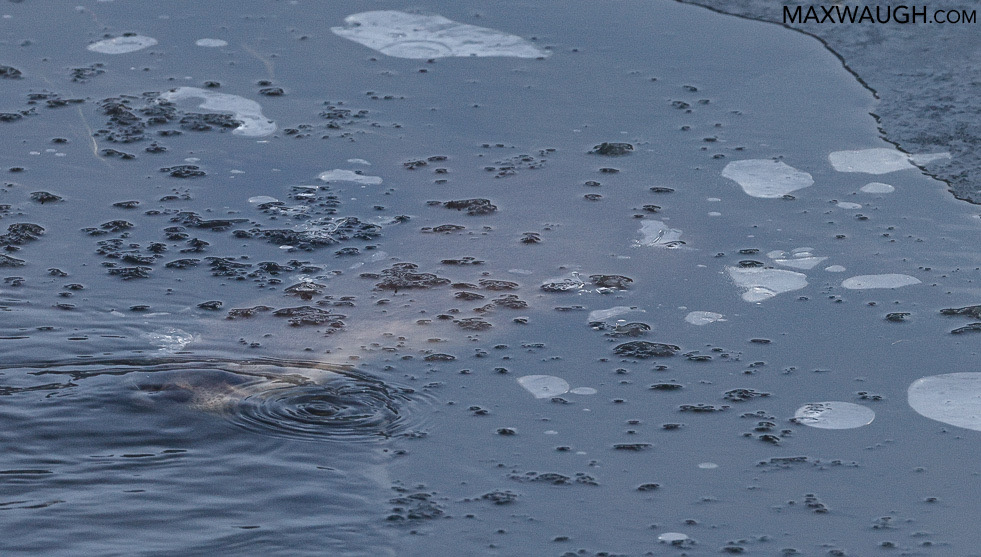 The younger otters were still a bit clumsy. One even brought out two tiny fish at once, but then fumbled with them both on the ice. 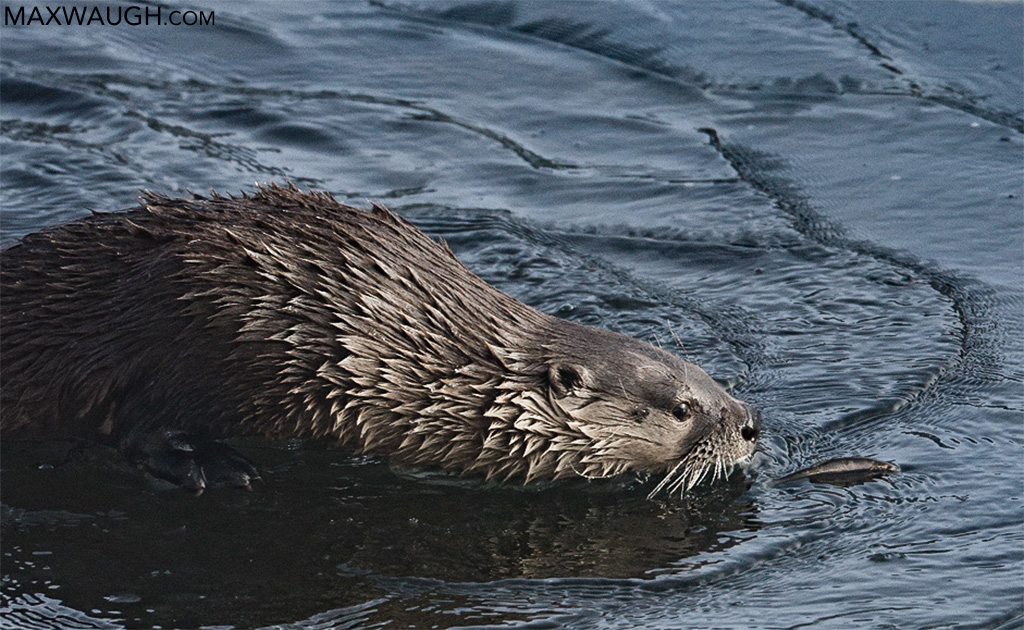 After an hour or so, they vanished beneath the ice and we chose to move on. Hayden Valley was a mix of low fog and clear, glistening slopes. Beautiful. A pair of lone bison plowed deep furrows in the snow.

Eventually, we started to notice fresh weasel tracks. I advised my clients to “track the tracks.” That is, follow the path of the footprints, because they could lead to the animal that left them… especially in a wide open field of snow, with several hundred yards of visibility in every direction.

I followed my own advice, and ten seconds later, spied the weasel! 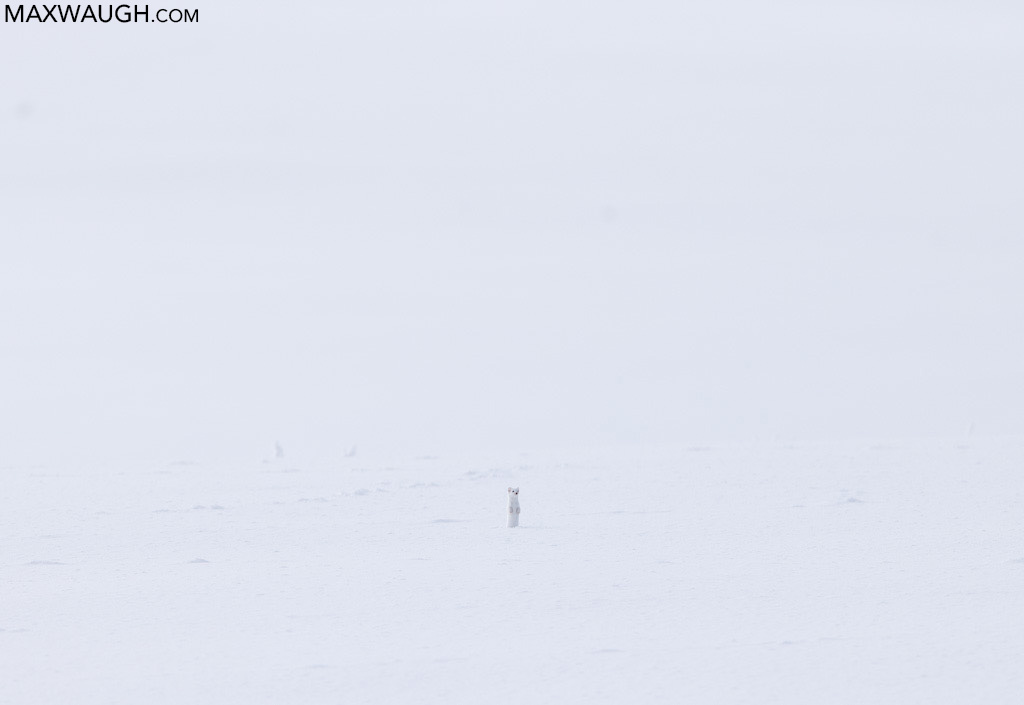 It was bouncing through the snow a fair distance from the road, but we piled out knowing that it could well circle back closer to us.

After that, a bit of a waiting game ensued. We’d get distant views of our target, but with the glare of the bright sun and snow, it was hard keeping it in view, and even harder finding it in the camera.

The weasel (long-tailed, by the way) would vanish for minutes at a time. Another coach stopped, but didn’t have the patience to wait around. A minute after they left, the weasel reappeared. And began to backtrack.

It was getting closer and closer, occasionally popping up and peeking around. Because the snow was so soft and deep, the weasel spent more time tunneling under the surface than bounding over it, making spotting (and relocating) even more challenging than normal. 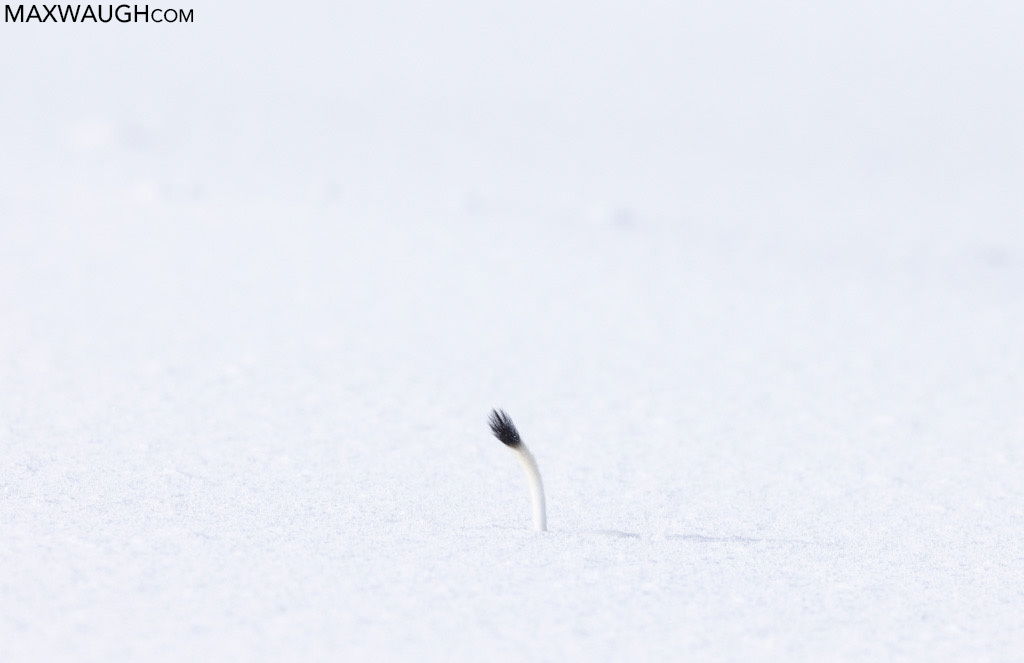 As predicted, it was getting closer. And by the time it was getting in good photo range, a small gathering of snow coach passengers had settled in to watch. Winter weasel jam!

We were rewarded with some great views, and after a very nice session, it crossed the road and bounced away over the hill.

This was a major goal for my group, and for some outside of our group. For some it was a critter they’d been pining for for many years. Hugs were exchanged. Another fulfilling day in the books, and it was only half over.

Conditions were quite nice on the roads, so for the first time in several years, we were able to take the coach all the way to Yellowstone Lake. A herd of bison cast loooong shadows on a snowy slope along the way. 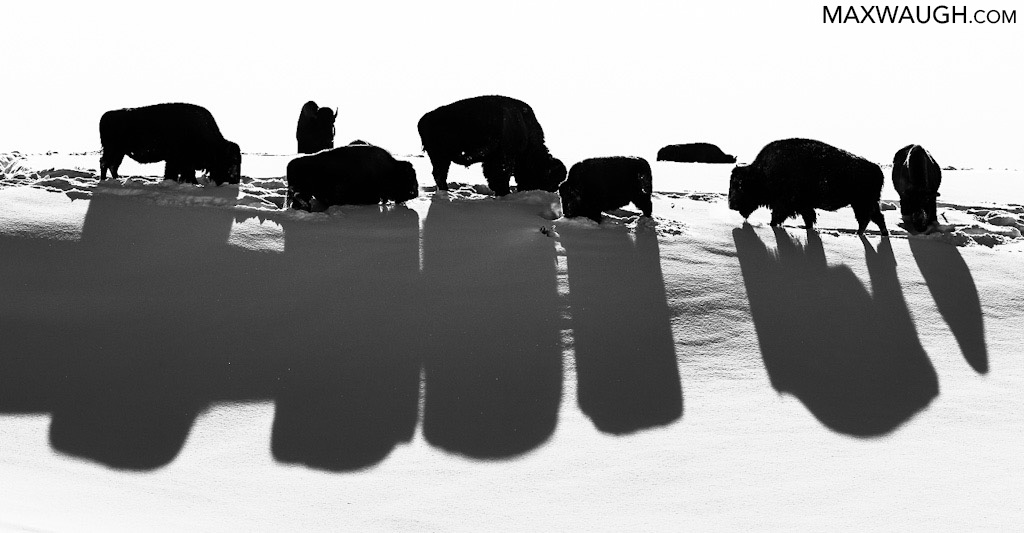 Otherwise, a coyote was the only notable wildlife sighting along the way. It felt great getting out to Mary Bay and soaking in the winter views along the shore.

On our way north, we were surprised with another otter, well south of our first group. Another coyote was on the road. We cruised back to the west side afterward, with just enough time to check in on the bobcat. It was in its usual spot, though the site was quite a bit messier. Finally, we saw the cat feed, as it licked at fur and gnawed on a leg bone. 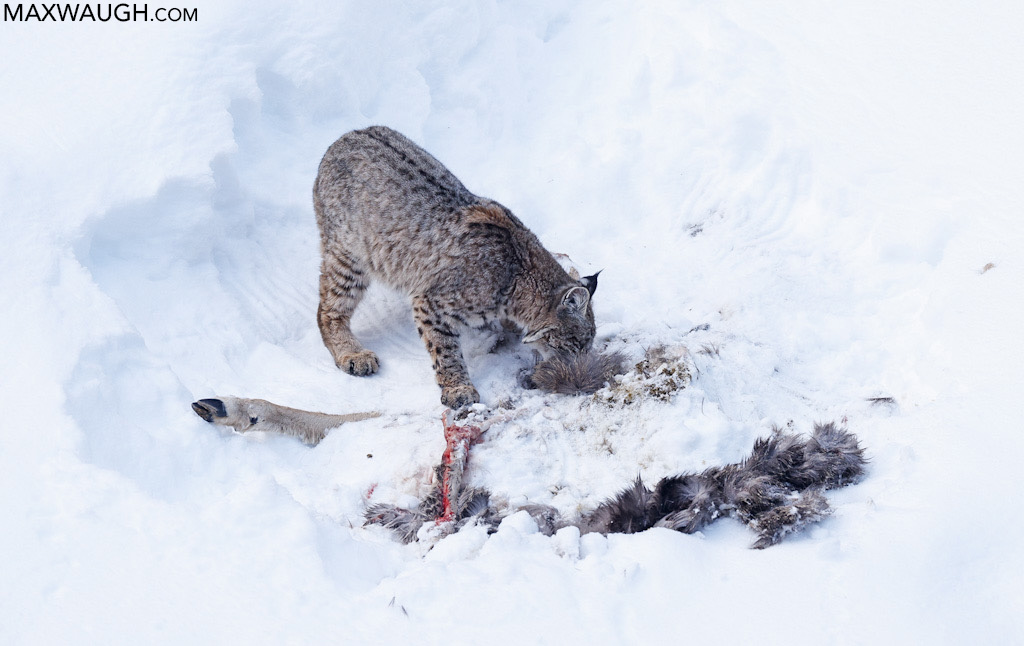 There didn’t appear to be much left, though perhaps more food was still buried under the snow.

Our final day in the park interior was the coldest yet, reaching -7F in the morning. Our first stop was the bobcat, of course. After it had climbed up the hill the last two nights, we hoped to get there early enough to catch it walking back down to the carcass this morning.

Alas, it was already resting there when we arrived. There would be no descent photos. We waited it out for a while, hoping the steam off the river would dissipate and offer clearer views… 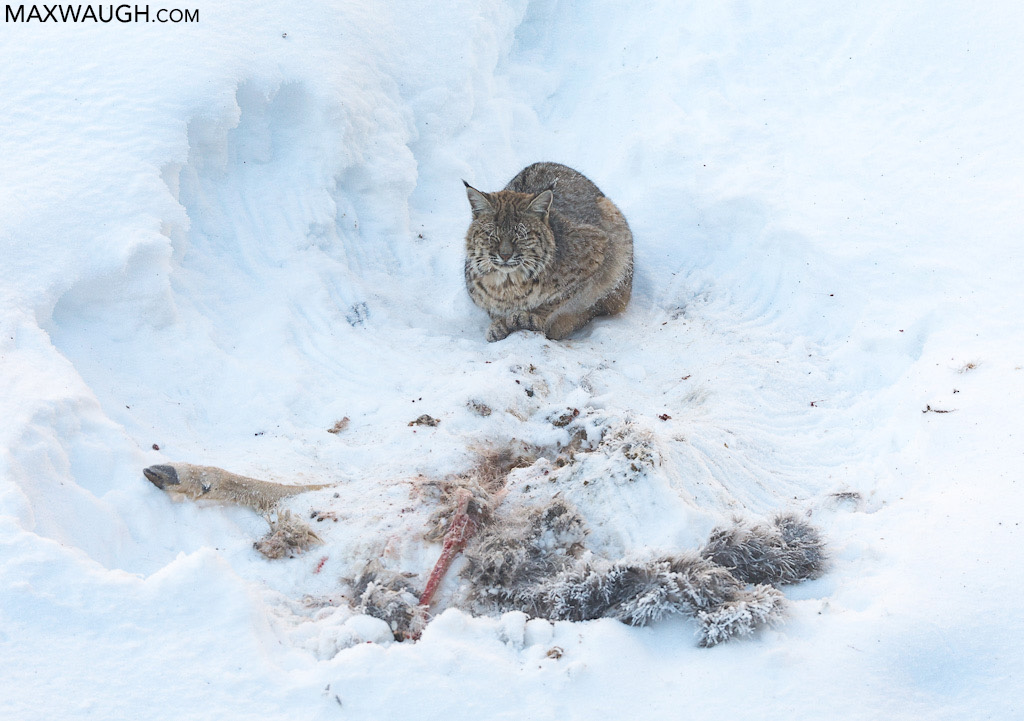 ….but the frigid temps made it a restless wait, and after an hour or so, we headed out to find new things.

Immediately after our departure, the cat apparently climbed up into the sunlight to warm itself. A few hours later, it packed up and appeared to finally move on. This animal has provided a lot of wonder and joy to many, many park visitors this week. One can’t help but feel grateful for the rare opportunities nature’s unpredictable story offered up to us all.

We wanted to squeeze in another visit to Hayden Valley, since it had been so good to us the day before. Since it was also Transfer Day (during which we drive all the way around the park to Gardiner for the second half of the tour), we had a limited time frame to get to the east and check things out.

Cold days are sunny days, and Yellowstone sparkled in all her glory today. Once again, we came up martenless, but we did manage to find a couple of otters out in the valley. As we drove southward, I spied a distant bison that was creating some serious steam as it exhaled in the cold air. So we pulled over.

The bison didn’t live up to its potential. A bit too much distance and a messy background made me give up on it rather quickly, so I checked the surrounding hillsides…

…and found a black wolf.

By the fifth cry of “wolf!” the rest of the group realized that I wasn’t requesting an animal, but actually seeing one. 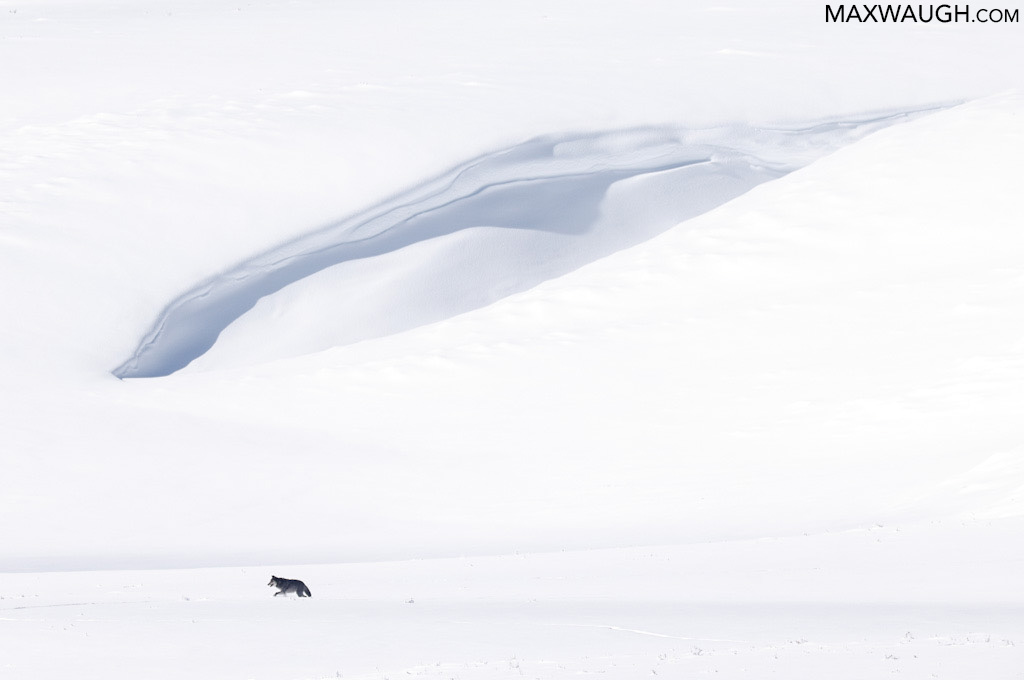 It was distant, but the crisp air and the longest possible lens combination still made for pleasing photos, especially in the lovely snowy landscape. The wolf seemed a bit confused, or just undecided on where to go. It ultimately did a big circle out in the hills before disappearing out of view. We opted to stick around in case it reappeared and came back in our direction. Couldn’t think of a better excuse to sit and have lunch.

Lunch was interrupted, however, as a large bull bison came marching up the road behind us. This may or may not have been the original billower, but he sure looked impressive in what turned out to be an ideal angle for photos (if one shot from a low angle to clean up the foreground… groomed and driven snowy roads are adorned with an obvious and distracting texture). 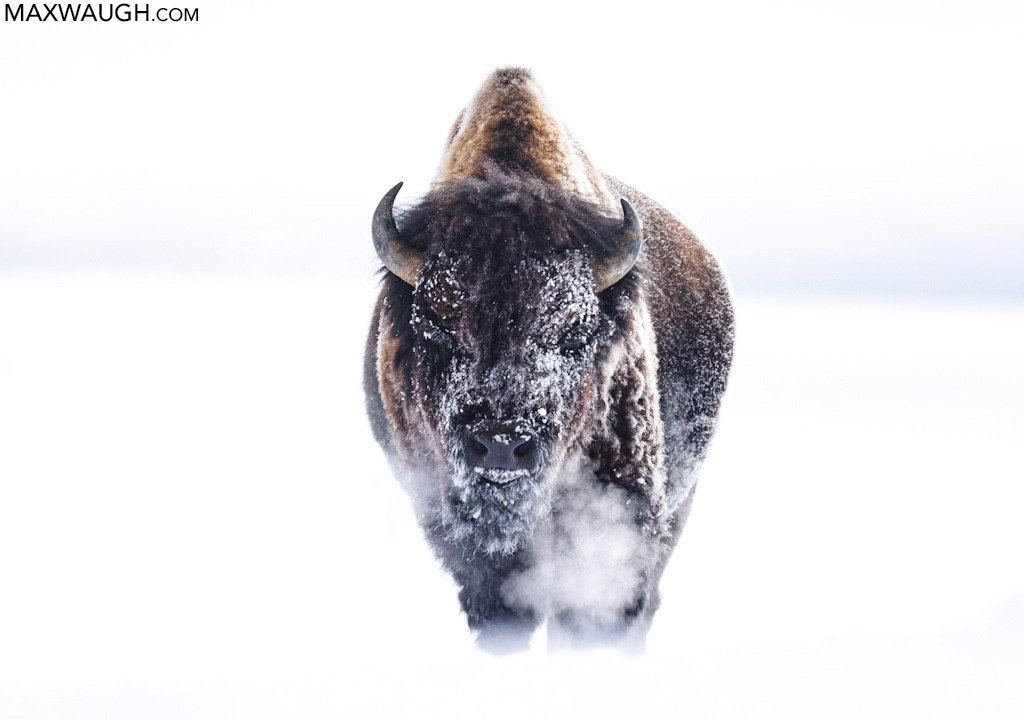 On our way back north, another otter was seen in the distance. 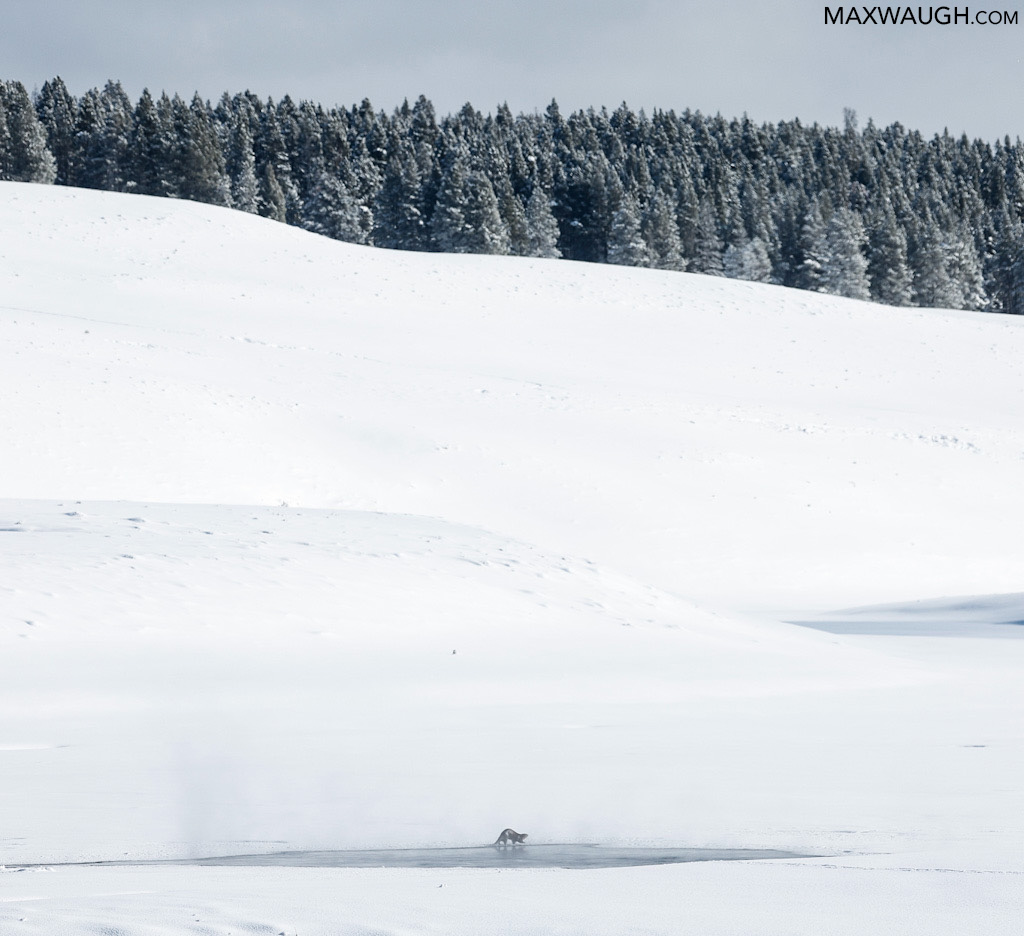 The remaining drive passed without incident, and we opted to head out of the park in order to start the drive to Gardiner as soon as possible. That drive also was completed without incident (it’s always sketchy, given that the drive along deer/elk-infested Highway 89 is all done in darkness). We settled into our new home and prepared for our first foray into the northern range the next day.