Thursday marked a return to the northern range for me, and the first day there for my clients during this tour. From my perspective, little has changed since last week. It was pretty slow then, and by most accounts remained so during our time in the interior.

Our exploration on Thursday didn’t change that thought, but we had fun. We wound up the switchbacks above Gardiner at around 7, and as the sky got lighter kept driving eastward with nothing to distract or stop us. Scopes were set up here and there, presumably pointed miles away. We were looking for something we could see out the window at least.

The most exciting thing about the drive into the Lamar was that I hit green at the Lamar Canyon metered light for the second (and later third) time in a row, after landing on red during my first several passes of the trip. Or perhaps the highlight was the fact that one of the pit toilets at Hitching Post smelled strongly of Old Spice.

Moose were a notable sighting, but too far out to photograph in the eastern valley and Round Prairie. So we continued, driving all the way out of the park in hopes of finding a fox, or some other smaller critter. There are tons of fox, marten, and hare tracks outside the park, but finding those animals (so often leaving their prints at night) is easier said than done.

We did at least find a fox, though unfortunately it was camped outside someone’s house waiting for handouts. 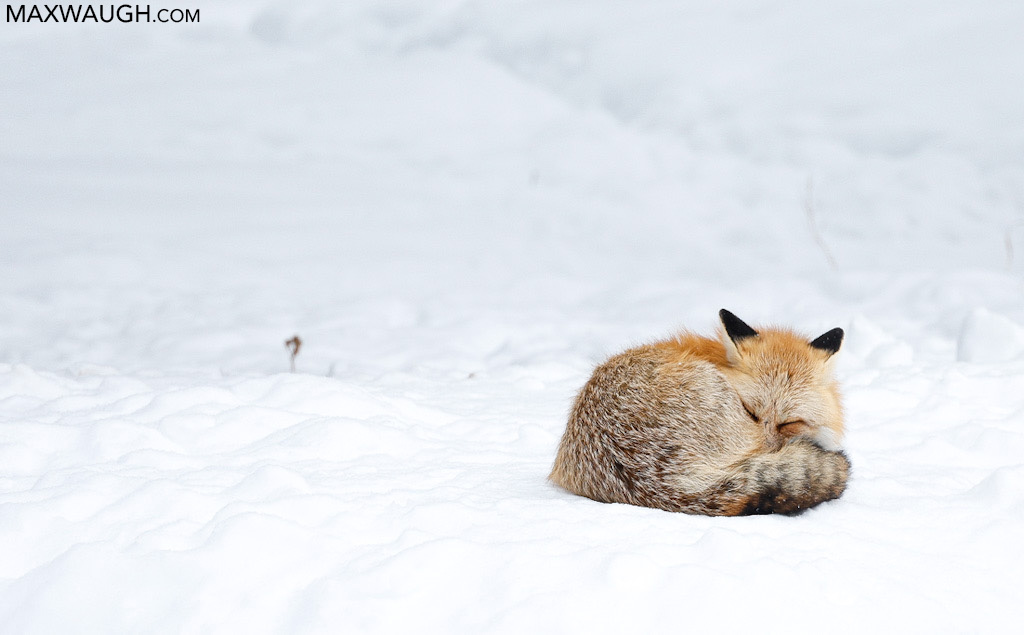 Once again, some of the local foxes are being fed, making them likely roadkill candidates come peak tourist season (or even before that… we had passed a deceased fox below the road inside the park already).

The clients were happy to finally see a fox, after missing out both last year and so far this year. But we all hoped to find one “au naturale.” We’d keep searching. Before returning to the park, we did stop by Cooke City Coffee, one of the local small businesses Jenn and I partnered with during the post-flood summer and fall in hopes of generating extra business for local outfits hit hard by the cancelled summer season. Kara has hooked me up with some tasty beverages so far on the trip, so I treated the clients today. 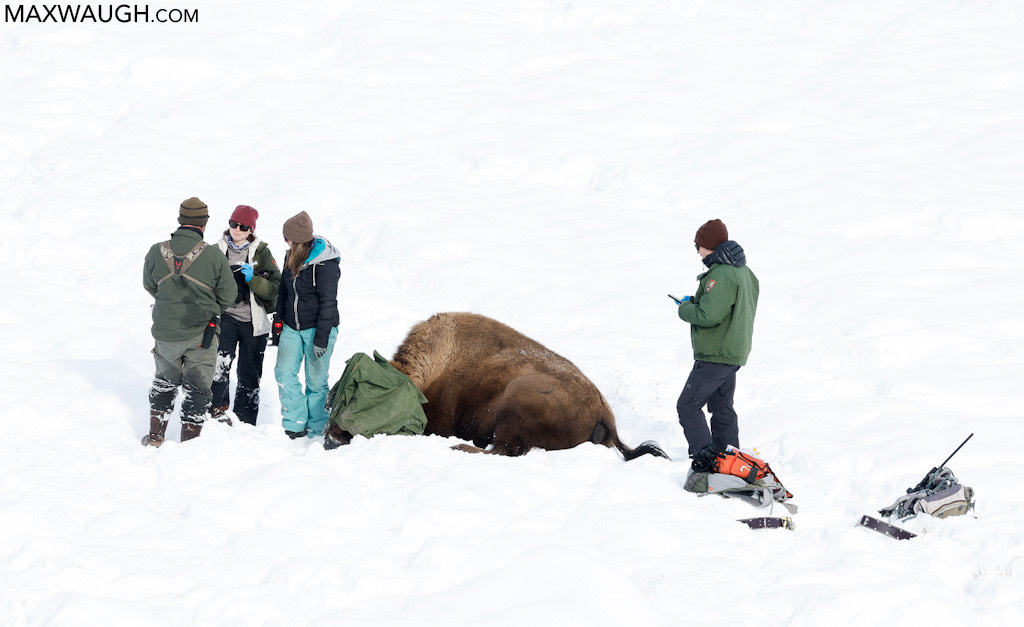 All the way back at Floating Island Lake we finally found something of interest. Driving past a large snow-covered boulder, I spied someone peeking out at us. 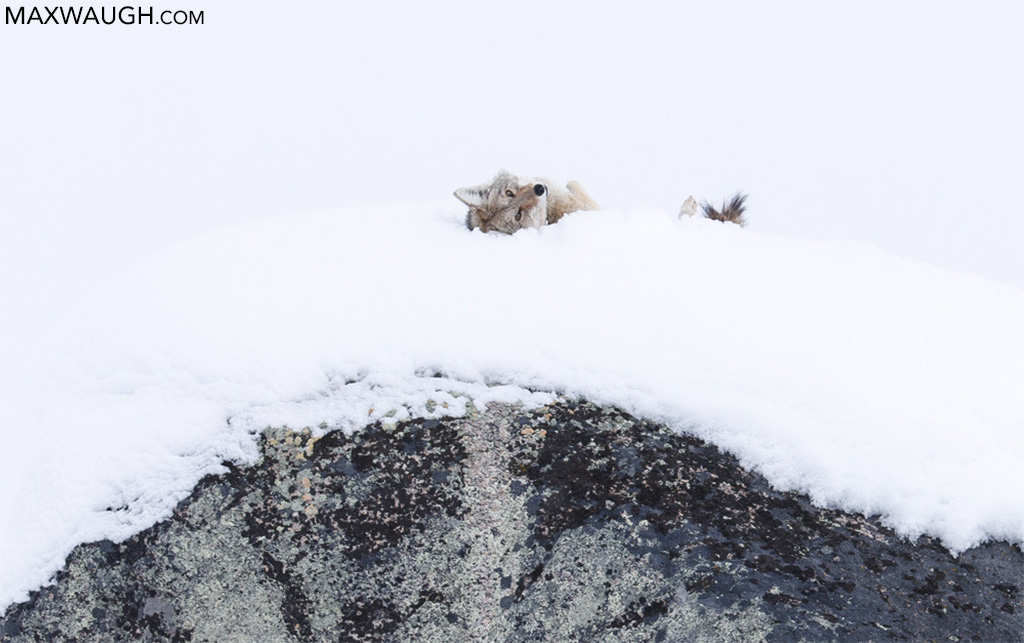 Two-Dog Days are nothing to sneeze at, no matter what combination you get. We tried to make it three, but the wolves didn’t cooperate, and we never found other foxes to photograph.

We had almost completed our drive out of the park as darkness descended over Gardiner when a bull elk distracted us. 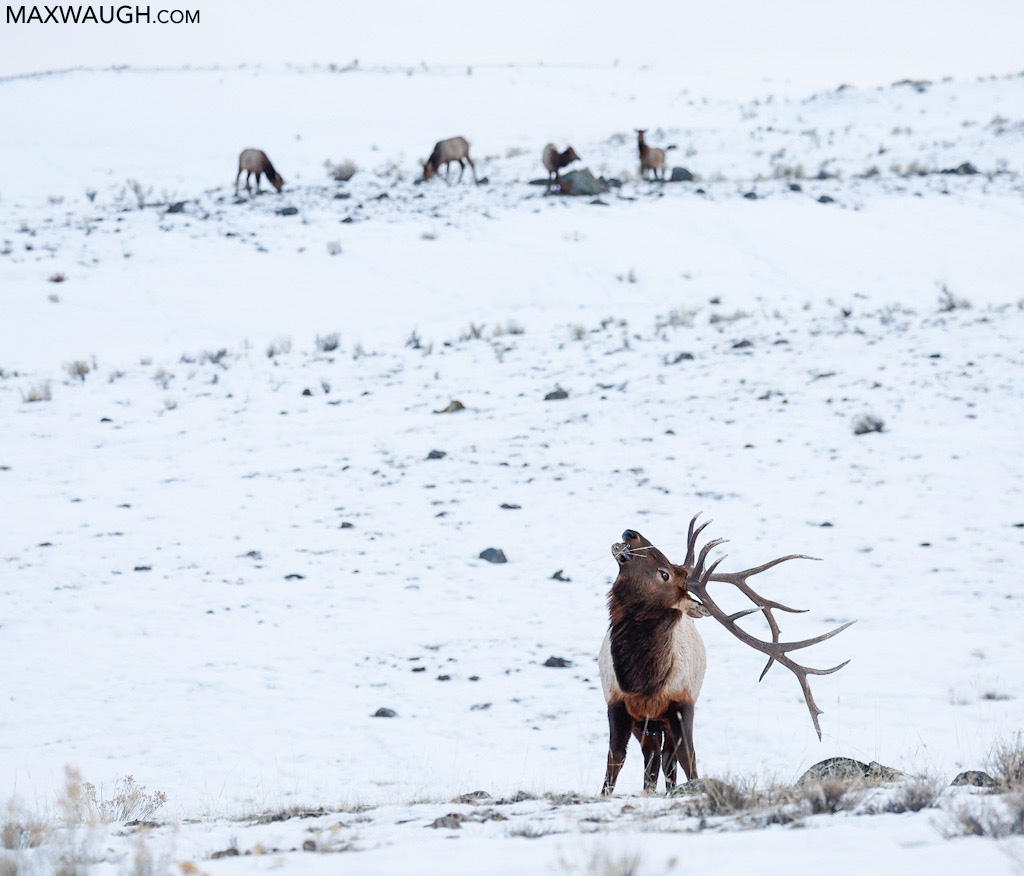 It felt good to stretch the legs and shutter fingers one last time.

The north continued its recent pattern of fairly quiet, cold days. The sun was fighting its way through low clouds this morning, and we stopped on the floor of the Lamar to capture the cottonwoods as they were bathed in the early morning glow.

I drove eastward after that, but already started thinking about backtracking to cover the valleys once more while the light was good. At Pebble Creek, however, my clients urged me to keep going, and since we were still hoping for a fox in the park, it made sense.

Before we even reached Lower Barronette, we found our fox. Over the next hour or two, it trotted mostly along the road, only spooked off when cars drove by. 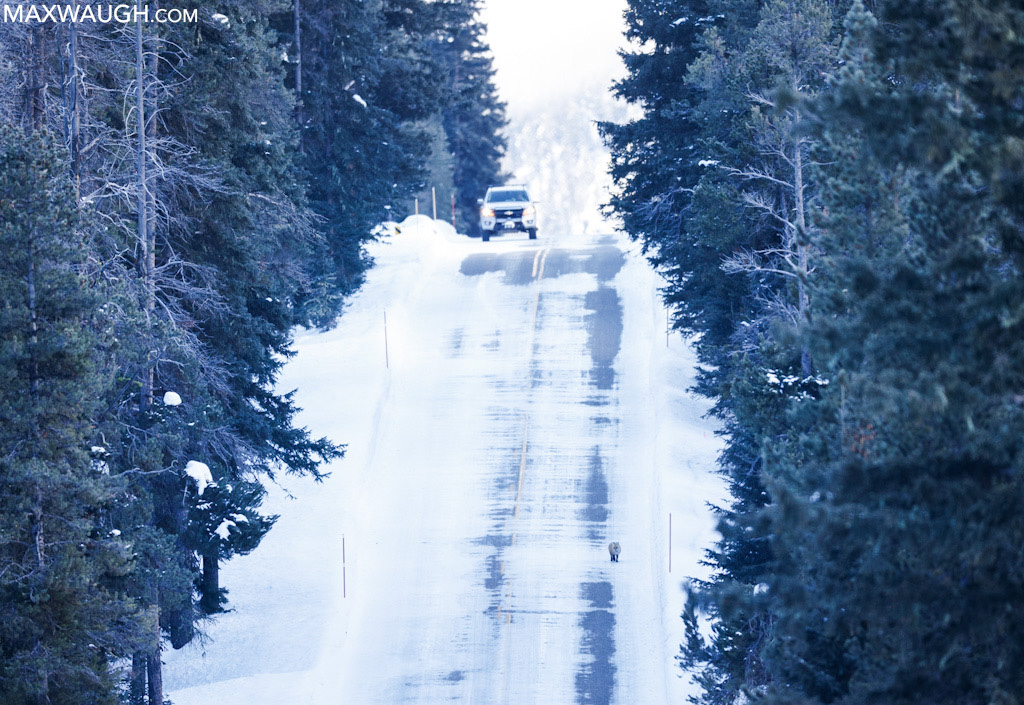 We were fortunate to catch it in the snow as it passed a bison and then us, before continuing on its way. 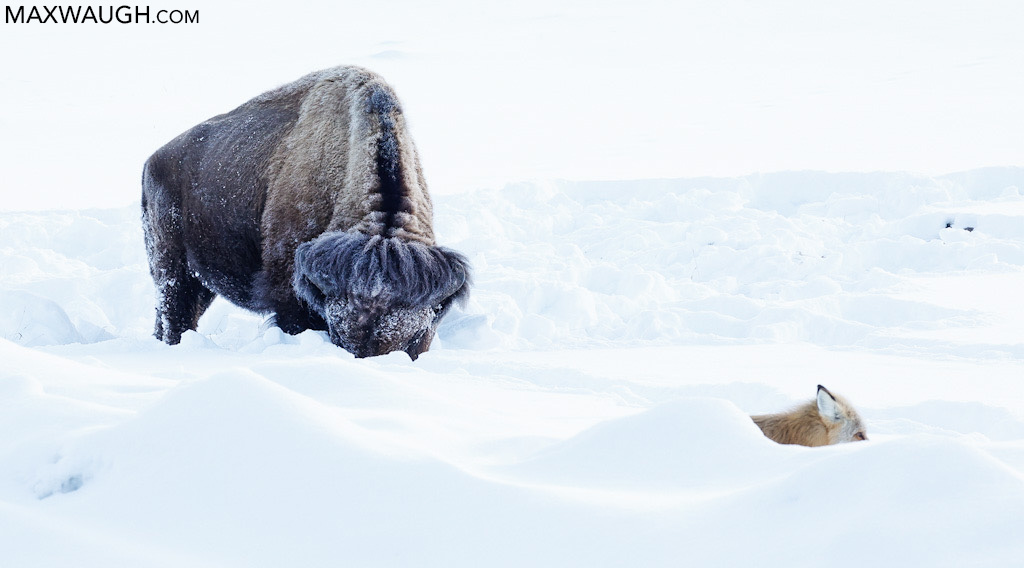 The fox eventually made it all the way to Silver Gate. We had moved on and made our way up to Cooke for a peek at the fox up there (still waiting in its usual spot, so we moved on), and a rowdy break at Cooke City Coffee.

For the second half of the day I figured we’d finally head out of the park to check on wildlife in the northwest, but we were waylaid when word came in about some recent badger activity. This resulted in a prolonged stakeout at a seemingly-recent badger hole.

Signs of activity were apparent, but there happened to be some recent diggings on the other side of the road as well, so it was impossible to tell if we could even realistically rewarded. That was okay, as the wait allowed us to chat with fellow guides and their guests who stopped by. Nobody was bored, at least!

What would our final day in the park bring? Anything before the Lamar Valley?

As it turned out, no. And in those times the conversation in the vehicle tends to get a little weird with this group. Today’s discussion resulted in someone volunteering to be cannibalized if we were stranded in the wilderness. When you have a group this tight, things are either really great or they just go off the rails…

Anyway, something did eventually happen outside the vehicle. We first drove past the previous day’s badger stakeout spot. It was really too early to expect any new signs of activity, and with a fresh dusting of snow on the ground it really didn’t appear that there had been any.

At the Confluence, something grabbed our attention. A Golden Eagle was perched on the other side of the river. We drove on to the next pullout in order to park safely, and then worked our way back along the road on foot. Just as we arrived, the eagle took off and flew across the road, landing on the hillside above us. 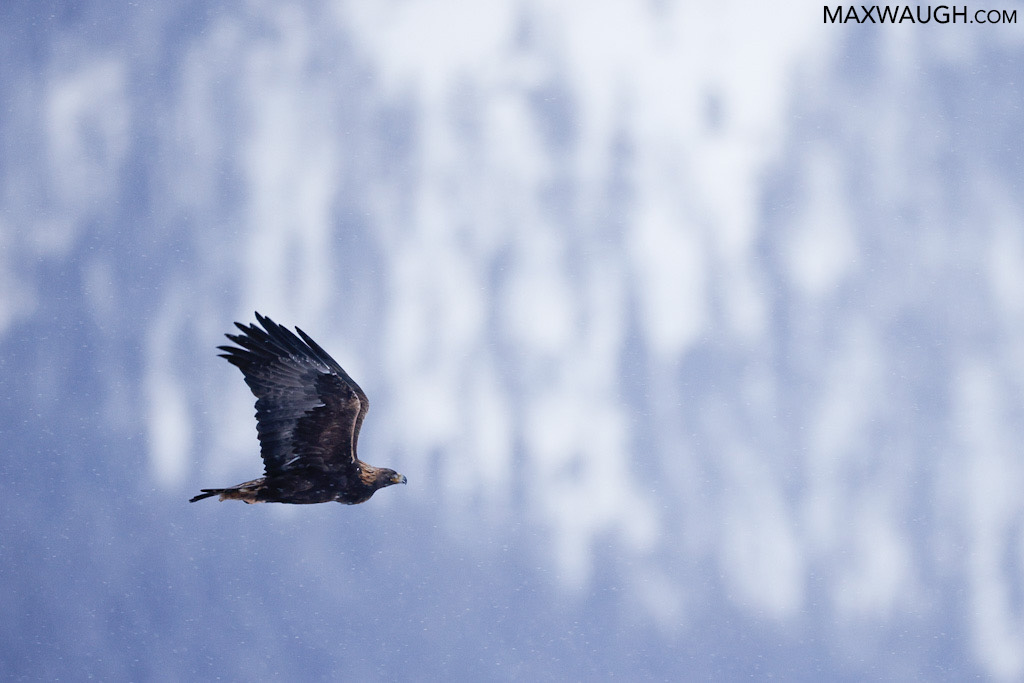 Then it proceeded to jog up the hill in fits and starts. Once it climbed to a sufficient altitude, the eagle took off again, landing in a nearby tree… where a second eagle waited. The two were eventually joined by a curious magpie for a short time.

It was chilly, and fingers were starting to tingle when someone drove by slowly and mentioned an otter was seen downriver… but it was coming our way. As we packed up to investigate, one of the eagles soared right over our heads and circled out over the valley floor. It was chasing a duck.

The duck proved to be too fast, so the raptor soon circled back and returned to the hill. Moments later, the otter appeared. It hung out for a little while, alternating between wading through shallow waterfalls in search of food, getting out on shore to scratch its back, and diving back in. 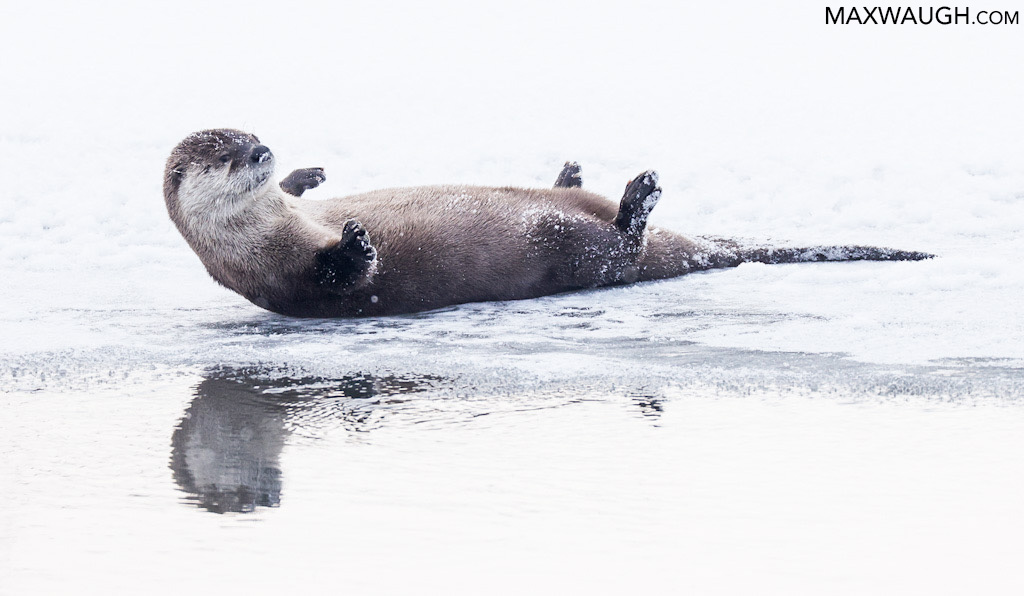 A fun show, but I made sure to keep an eye on the eagles above and behind us just in case. It’s nice to have multiple distractions, especially the way the north has been since my arrival.

Eventually the otter disappeared, so it was time to move on. We made our now-daily pilgrimage up to Cooke City. No foxes along the way or in town, so why not another Cooke City Coffee break?

After a quick stop at my property, we were back on the road. Our drive through the park was quiet. Beyond a quick peek at the bear den (no sign of activity), and a brief owl search in the woods, we drove straight through and out of the park. I wanted to squeeze in a visit along the park boundary to see if we might find some bighorn sheep.

As we approached the boundary line, we were swamped by bison squeezing through along the road… heading toward the fleet of hunters waiting 300 yards away. Once we got clear of the jam, we kept going until everyone was out of sight.

We did finally track down the bighorn rams, including what is probably the biggest one I’ve seen here. He disappeared down the hill pretty quickly, but other sheep were a bit more cooperative. We finished our shoot by snapping some low shots of another male. 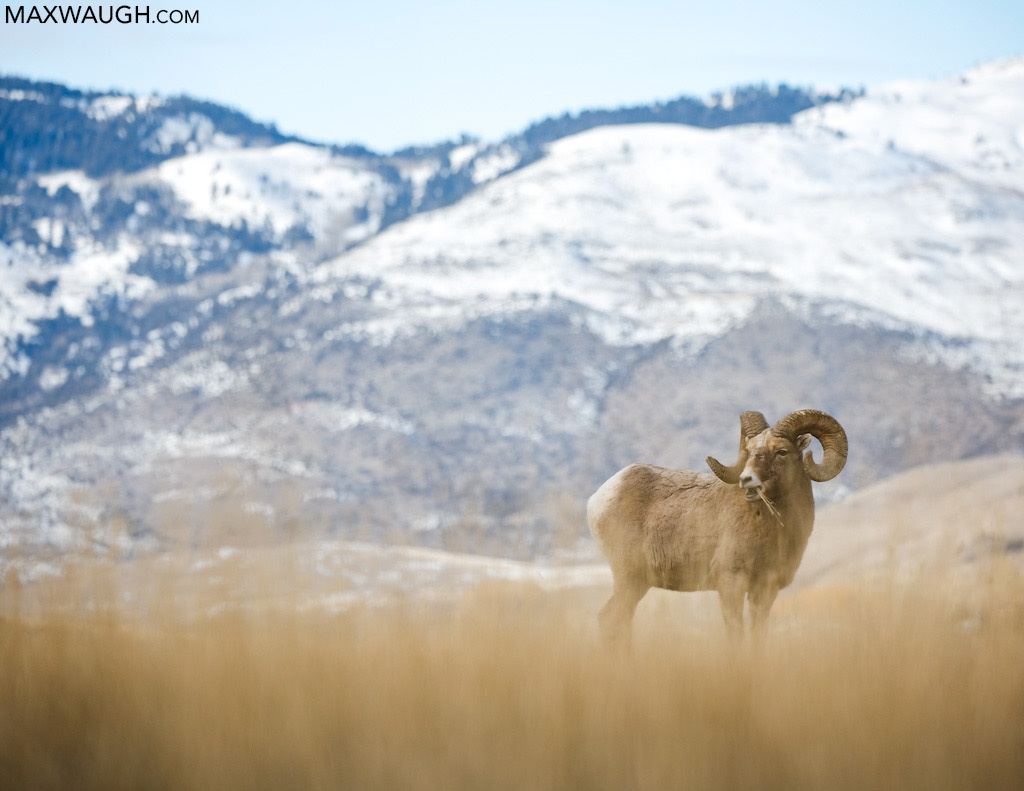 After we left someone apparently showed up and loosed their two dogs into the herd of bighorns, scattering them in all directions. Probably good we got out of there when we did.

This marks the end of my first winter tour. I’d like to extend a big thanks to my wonderful group this week, the Ravenettes, who came back after all meeting on their debut trip last year. It was a fun (at times raucous) tour, with some lasting memories.

On Sunday I’ll be dropping this group off in Bozeman, and immediately picking up my next group for the start of Tour #2. I’m excited to return to the winter wonderland of the interior!