This was client drop-off and pick-up day, when I said goodbye to my first tour group, and hello to my second. The whole process went rather smoothly, though this odd sighting greeted us as we left Gardiner in the morning. 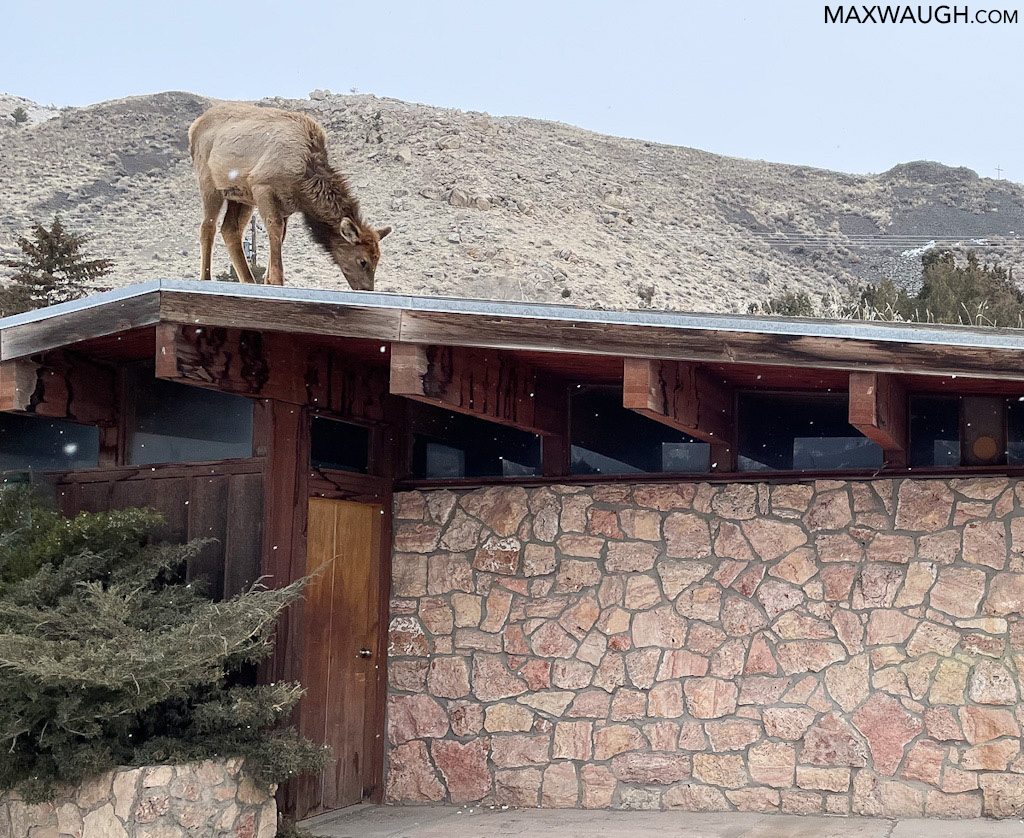 After hugs and goodbyes to the Ravenettes (many of whom I will see again on other tours later this year, and all of whom may join me on another trip in 2024), I gathered the clients for my second tour—many also familiar from past trips—and headed south to West Yellowstone. We arrived in good time and settled in.

So, I’m back in the interior. There’s pressure. Everyone’s well aware of the success we had during last week’s tour, thanks to these reports and the updates I’ve been sharing on social media. The bobcat is gone. What excitement will this week bring?

The great thing about Yellowstone is, you never know what to expect. No trip is exactly the same, even in back-t0-back weeks (though I sort of recall both of my 2014 winter tours were pretty slow… I still feel bad for those folks!). Nonetheless, expectations have to be reset, and you have to approach everything with a fresh outlook. Every sighting will be new and unexpected.

In this case, knowing there was no bobcat site to rush to first thing in the morning, we took our time going in. Last week we buzzed right by the Madison. On Monday we stopped the coach several times so I could investigate various spots along the river, looking for fresh tracks. There’s been marten activity, but no sign of a cat.

Our primary destination was the east side of the park, perhaps with an afternoon return visit to the Firehole Canyon (site of last week’s fun), just in case a certain something was lingering in the area. Hayden was so nice last week, so I was eager to return to the glistening white hills to search for mustelids, wolves, or other treats.

It was pretty foggy for much of the morning, even before we reached Hayden Valley. Before turning south, however, we made a detour to check for martens (which we never saw last week). This time, luck was with us. One marten was scampering about in the trees and on the ground. 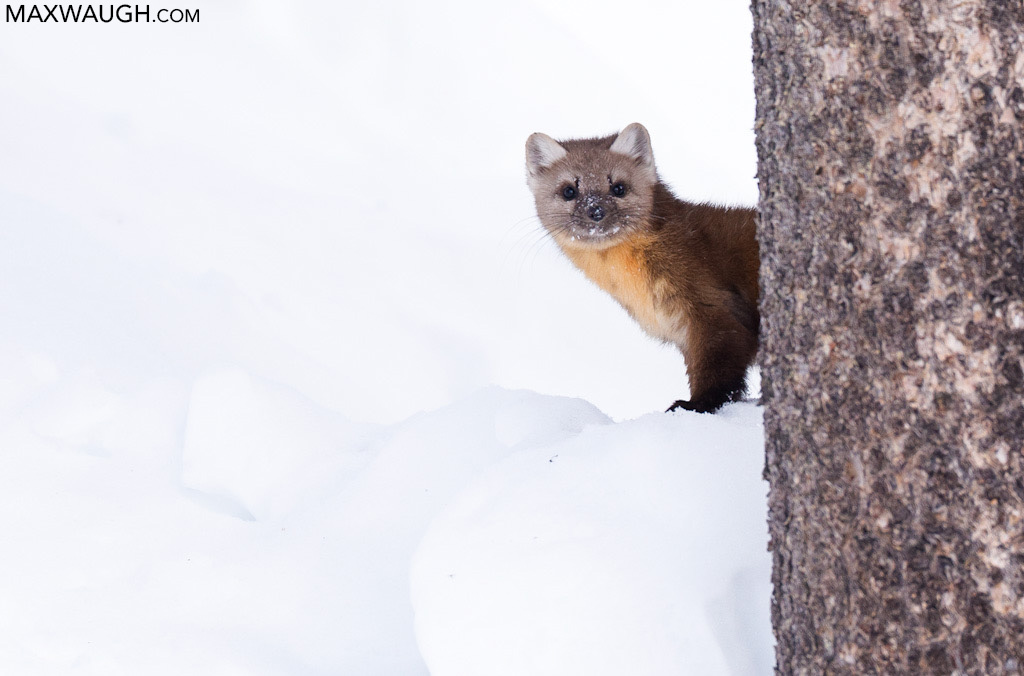 As I’ve detailed the past couple years, these sightings come with mixed feelings. The martens are showing up to investigate and look for food in a dumpster, as they do in various park hubs… they’re adept scavengers. That takes a lot of the thrill out of the encounter for me. But for my clients, many of whom have never seen or photographed this species, it’s amazing to see such animals in action.

This individual wasn’t around long, but put on a nice show as it climbed and jumped and peeked around tree trunks. Really a wonderful way to kick off a tour.

We stopped by the Canyon Visitor Center for a pit stop. On our way out, I watched the famous Clearing of the Roof Snow for the first time. 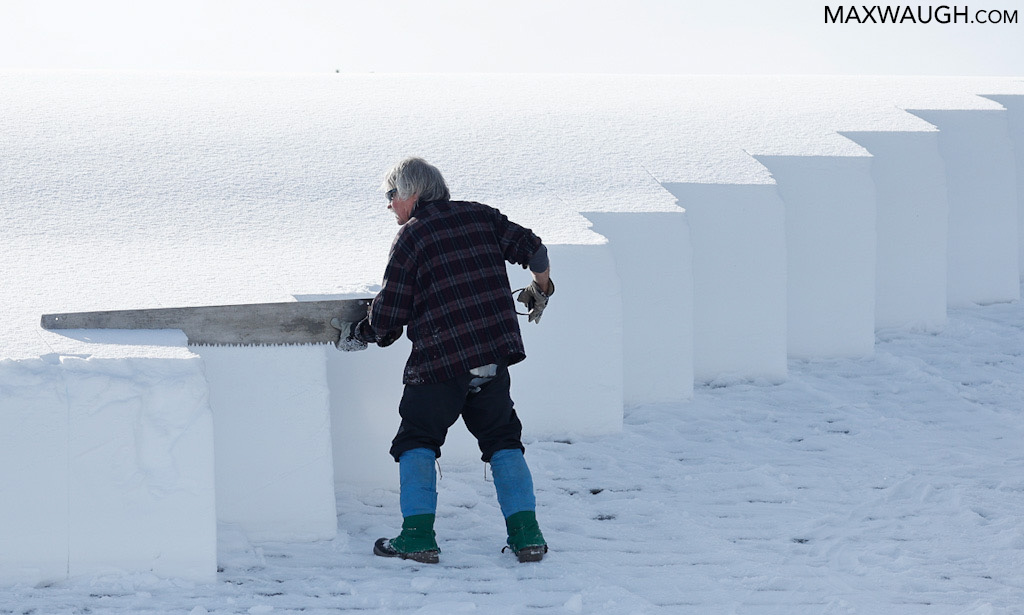 Okay, so what about the other mustelids? Our initial searches came up empty. No otters, and despite more fresh weasel tracks, we struck out there too. A distant coyote in the southern valley caught our attention, but we didn’t stop again until we returned to the northern end and had two distant Bald Eagles perched on frosty branches to the west.

A lunch stop back at the marten spot was uneventful, so it was time to make one last pass through Hayden. When we arrived at Alum Creek another photo group was out and staring at the river… the otters were out! With steam rising off the river, it wasn’t exactly the time for clear, crisp pictures, but we saw them. 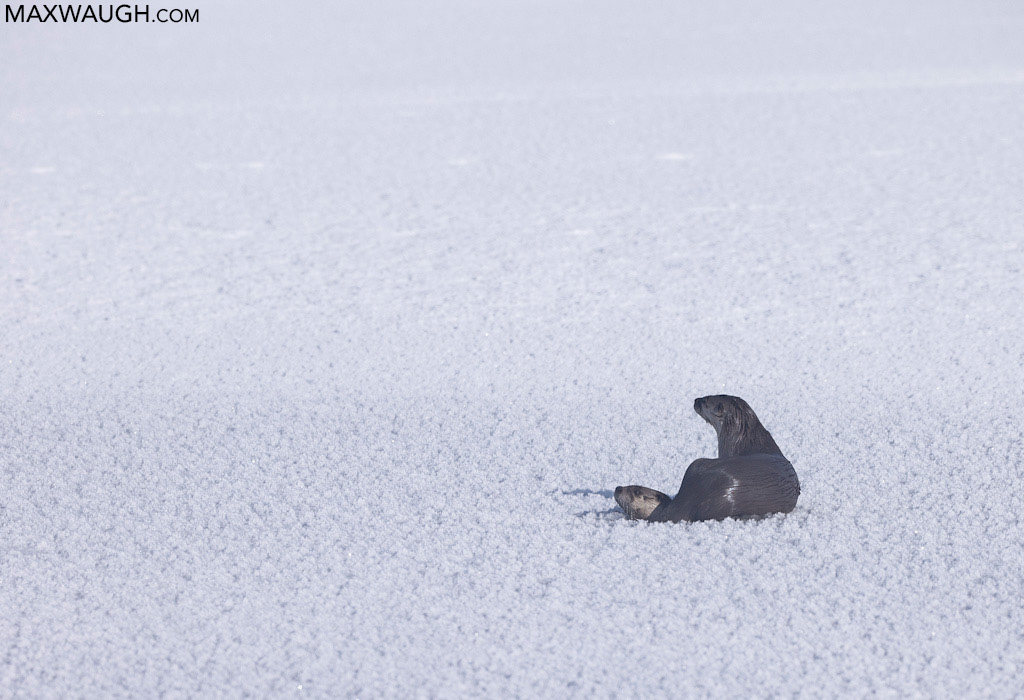 We got a short show, as they soon disappeared under the riverbank. Despite repositioning ourselves in case they emerged from a different point on the water, we had no further action… but an eagle did fly overhead. 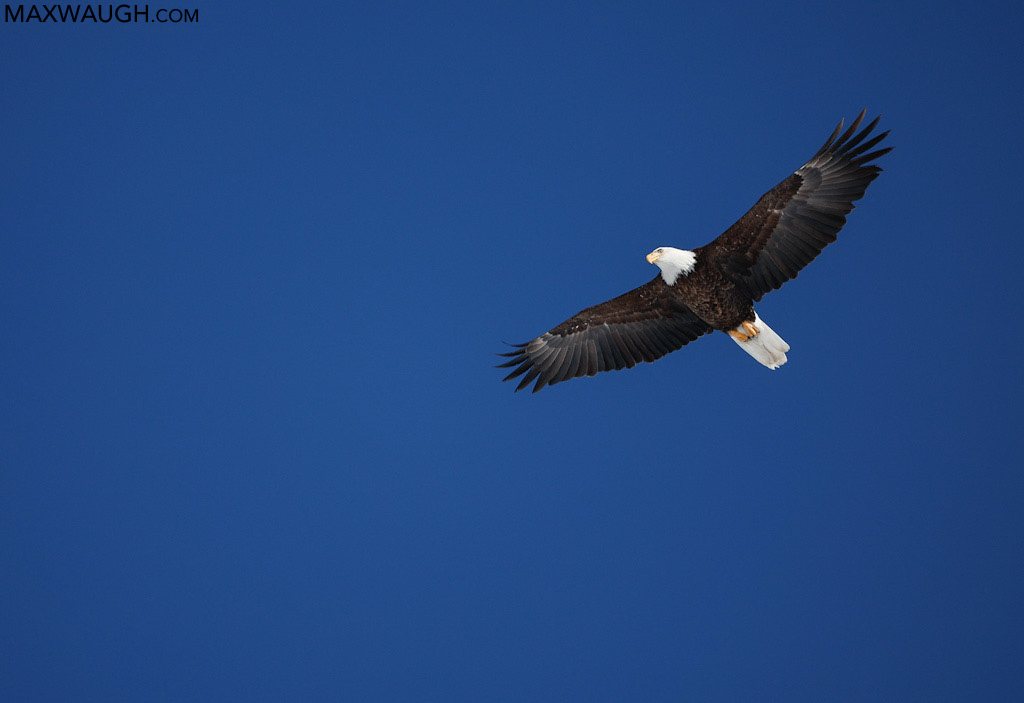 Perhaps the otters would be back out for us during our return leg. The south once again was quiet (another coyote out by the river), and indeed when we returned to Alum Creek, a bigger crowd had formed. Apparently the otters did reappear for a short time, but vanished before our arrival. It was time to return to the west. We wanted to have time to check the Firehole, after all.

Everyone managed a short nap during the 2nd-Most-Boring-Drive-In-The-Park, and then turning southward from Norris we chugged along the Gibbon River. A brief stop at Gibbon Meadows produced a scattered bisonscape. 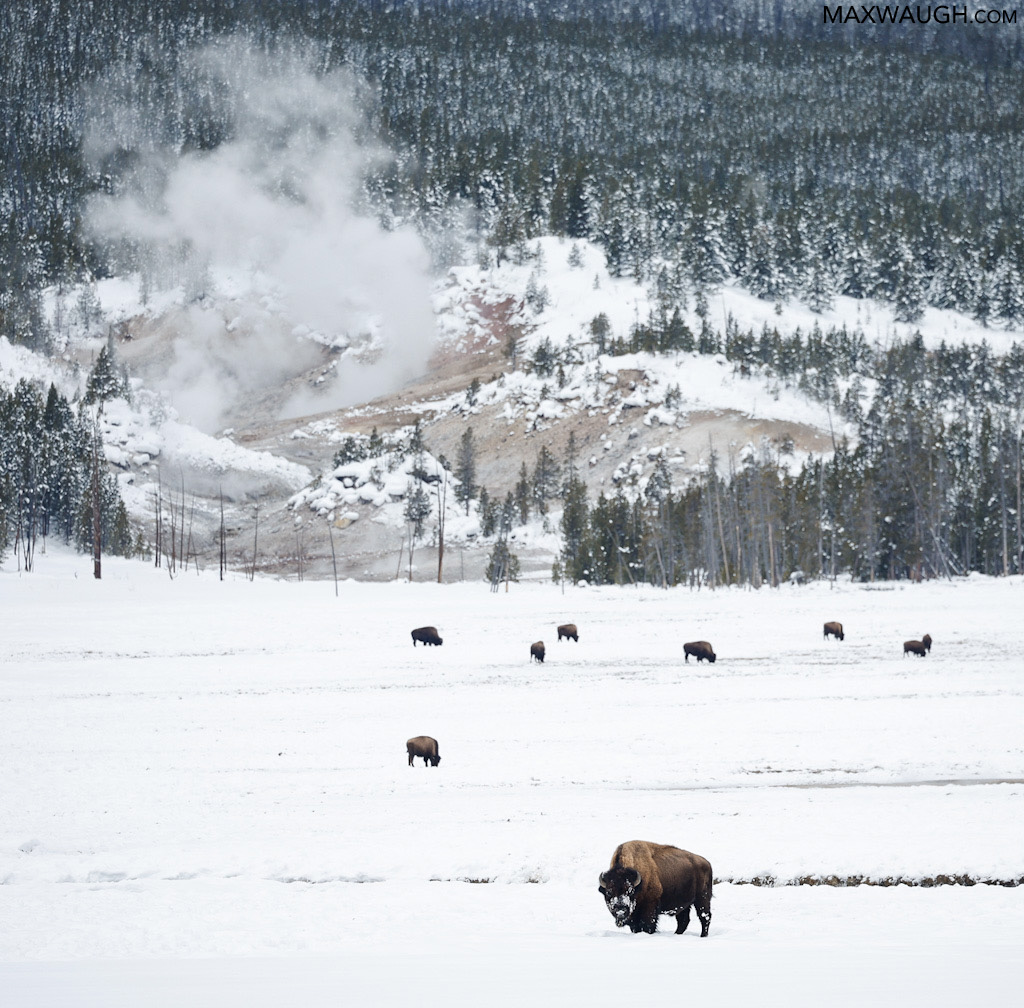 Onward to the Firehole. We weren’t the only ones with this idea, as two other coaches had entered before us to check the old carcass site the bobcat had rented for over a week. No sign of the cat, but scavengers had come in at some point to scatter the few remains.

More importantly, I spied some friends (who had spent their day on the west side), and got out to exchange updates. They had news: they had just missed a bobcat! Another coach driver had spotted one, but spooked it while trying to remaneuver their vehicle. That wasn’t in the canyon, but a couple miles farther up the road.

To me it made sense to go check. I felt there was a good chance the cat would return to the riverside once the coach had left and the noise had died down. We all headed out, our coach trailing the one carrying my friends and their clients.

We opted for a slow pace while the other coach headed off to where they had last seen the cat’s tracks disappearing into the trees.

It was my client Ted, sitting in the back, who exclaimed, “There it is! (Do I win a free dinner?!)”

Lo and behold, a bobcat was creeping through the snow by the river. Incredible.

I craned my neck to see if the other coach was still in view, but they had pulled past a herd of bison and gone around the corner, so we had no way of flagging them down. We piled out quietly, and just as we did so, the cat took two steps and made a half-hearted lunge toward the water. It had tried to hunt a duck, but gave up quickly when the bird flew away. 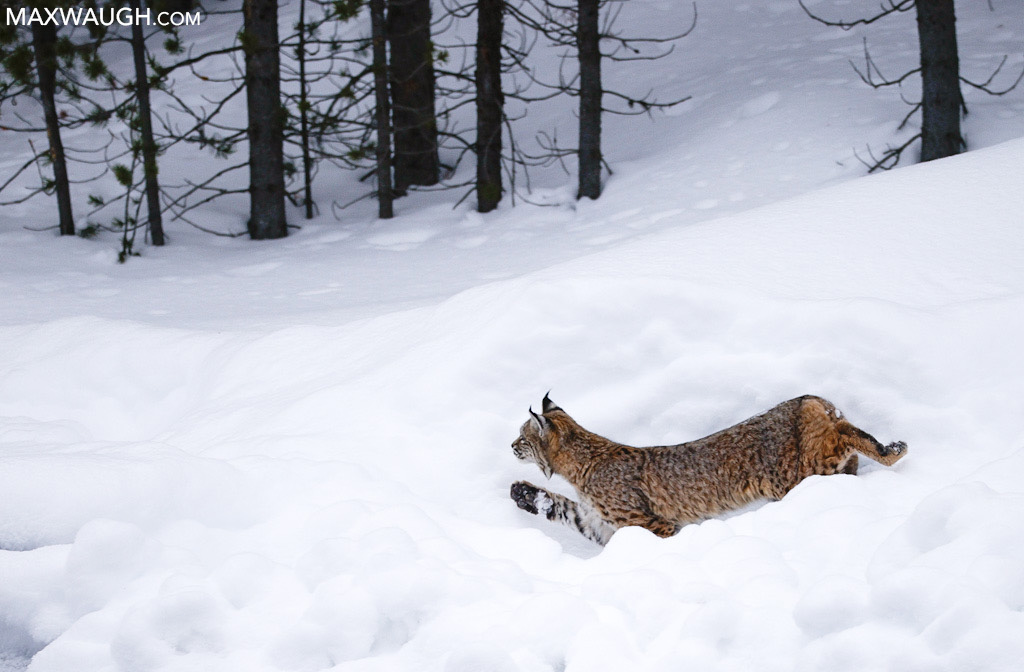 Careful not to create too much noise (knowing the cat had been spooked before), we settled in and snapped some pictures. At one point it sat up and preened a bit. 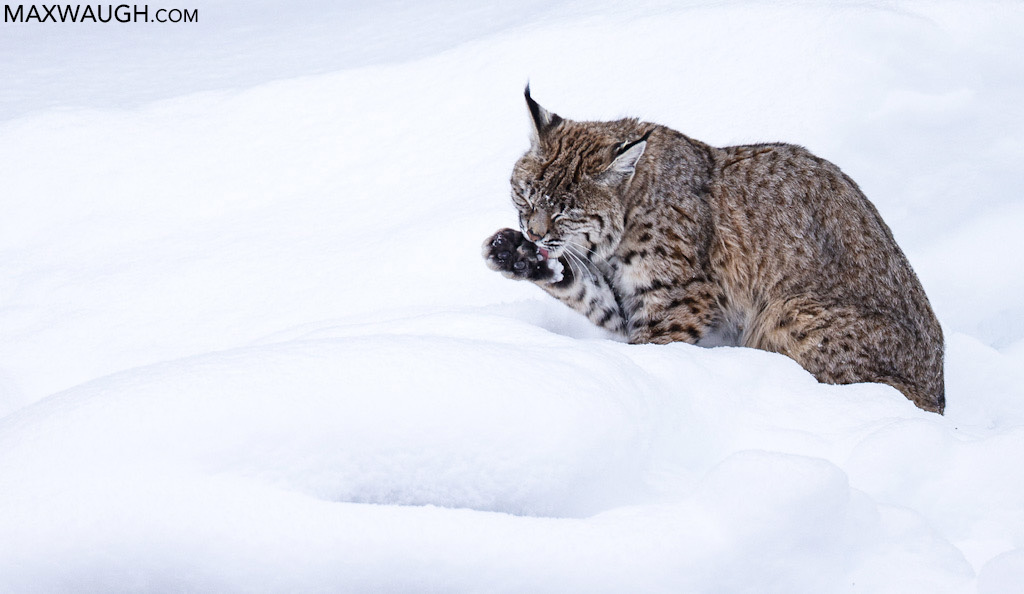 Zooming in on the photos, we could see porcupine quills stuck in the cat’s ears… which had been noted on last week’s cat. This appeared to be the same individual. I thought there was maybe a minuscule chance that the cat might reappear along the river somewhere this week, but it hadn’t seemed realistic to expect that we’d actually find it.

We had the bobcat to ourselves for about ten minutes before the next coach arrived. A few clanks of steps and a squeaky door, plus rushing footsteps convinced the bobcat it was time to leave. It headed into the trees.

Fortunately, we could actually track its progress through the young pines, and the burgeoning crowd (several other coaches arrived, including those who tipped us off) was able to see it and snap quick photos when it appeared in the gaps in the trees. 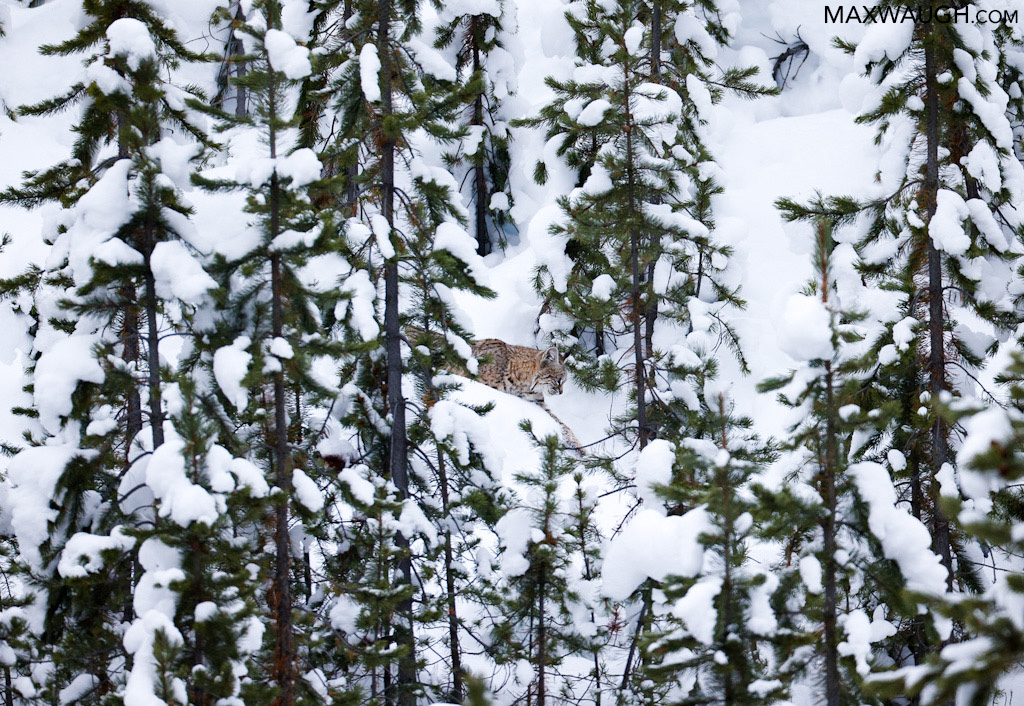 Unlike last week’s sighting, which was accompanied more by feelings of relief (that the cat was still there), this one was full of shock and surprise. What a way to kick off a tour!

The park experience can change in an instant. We had a banner first day, followed by one of the slowest photography days I can remember in a while. I should’ve known something would be off today when I awoke at 2am and couldn’t get back to sleep!

We chose to chase some leads from Monday. First, the bobcat, of course. A morning cruise along the Firehole didn’t turn up any sightings, and someone checked the canyon thoroughly but came up empty. So we turned northward. And kept going north at Norris Junction.

It’s been a while since I’ve been on the Norris-Mammoth route in winter, but a couple of different sightings prompted us to give it a shot. Unfortunately, it didn’t pan out, despite the fact that we went all the way up to Swan Lake Flat and back.

When we finally approached Canyon Junction, we’d been in the coach nearly four hours and had barely moved a muscle. There were creaks and groans when we finally stepped out to take a break. Soon thereafter, we did spy one marten, but it disappeared into the woods before we could lift a camera.

Our empty day continued in Hayden. No otters, not even a coyote. Toward the south, a pair of bull bison were eyeing three snowmobilers who had dismounted and were walking out in the snow fairly close to them. Turns out they were park personnel, but they kept tromping around in circles, as though someone had dropped their car keys.

Eventually, one of the bison raised its tail… and defecated. This got the trio’s attention, and they stood, waiting for the bison to move off. It appeared they found what they were looking for: bison poo. Other patties they were kicking around just wouldn’t doo… they wanted the freshest possible.

Unfortunately, they had a standoff on their hands. The bison refused to move. And to compound matters, several more bulls were descending a nearby hill to join the party.

After a good ten minutes, all the bison went to the road and galloped away. The research crew finally moved in to claim their prize.

We tried to follow the rowdy bunch of boys on the road, but they pranced and rumbled away, eventually trotting out into the snow. Whatever fun interactions we hoped to capture died down, and once again we were left wanting.

A lunchtime stakeout yielded no more marten sightings as snow fell and wind blew. We opted to return to the west side to check for the cat again. A smattering of 3-5 minute naps ensured I’d have energy for the stretch run.

Not that I needed it. No cat, and not much of anything else. Thing is, just about everyone else we spoke to who spent time on both sides of the interior reported the same: a slow, slow day all around.

On the drive back down the Madison, we finally found a reason to rouse our shutter fingers out of stasis. A few bison marched down the road in the falling snow. We had not yet tried the “bison on road” shot yet on this trip. 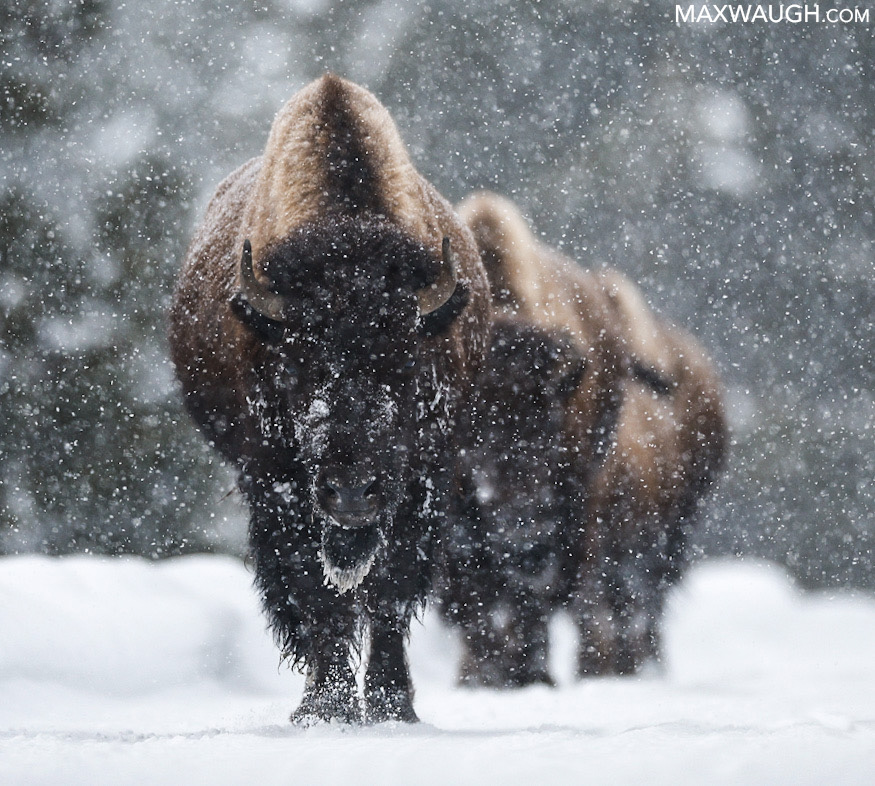 And as we passed Seven Mile and continued toward the west entrance, a distant coyote walked the ridge line, going past a smattering of trees. 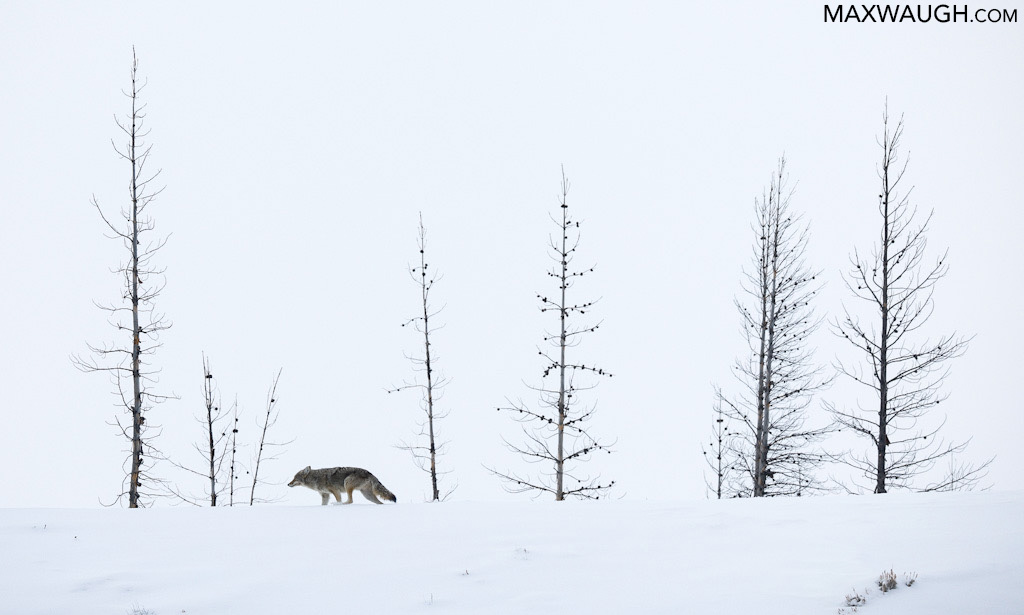 It was definitely the best photo op of the day. One more day in the interior, and then we’re northward bound!