Get away from the massive safari crowds and join me for an exciting wildlife photo adventure in Zambia! The Rivers of Life tour will bring you into the heart of two fascinating national parks, where the action is focused around two of southern Africa’s great river systems: the Zambezi and Luangwa.

Our game drives will bring us face to face with many of Africa’s all star species, from elephants (SO many elephants) and hippos congregating along the edge of the Lower Zambezi, to wild dogs roaming sparse inland forests, to lions and leopards in the bush and plains of South Luangwa. We’ll get out on the water to photograph riverside wildlife by boat, and will explore beautiful winterthorn and ebony forests, among the most unique and beautiful environments I’ve ever visited in Africa. As evening descends, night drives present a chance to seek out nocturnal wildlife. Normally-elusive animals such as genet and civet are commonly seen, and there’s loads of owl action.

Perhaps most importantly, Zambia offers us a chance to experience a quieter African adventure. It is off the radar for many visitors, who favor the popular destinations in eastern and southern Africa, so we’re rarely involved in huge traffic jams centered around a single wildlife sighting. We’ll be based in smaller, more isolated camps (often shared with more animals than people), for a more peaceful, natural experience.

Target species on this trip include:

Our exploration is mainly comprised of a standard “game drive experience:” early morning departures following breakfast/coffee, a return for midday rest and lunch, and then departure for the afternoon and night drives, followed by dinner back at the lodge after dark. During our time in the Lower Zambezi, we will mix in a couple of boat outings on the river, since there’s a good chance to catch elephants, hippos, and a lot of bird action in and around the water.

Our vehicles vary for each camp, but most are the standard “Land Cruiser” style safari vehicles (with and without canopy roofs) with a staggered seat/bench arrangement. Our goal is for each photographer to have their own row of seats to shoot.

Camps vary in terms of accommodation and luxury, from more rustic tent-style lodging to high-end rooms with luxury add-ons such as reliable internet and air conditioning. See more details in the trip itinerary below.

We are traveling during what is essentially the dry season, which means warm but largely milder temperatures than other times of year, and decreased humidity. Roads are occasionally bumpy and dusty, akin to a typical, expected drive experience in the African wilderness. Rampant off-roading is not permitted in the national parks, but the system of roads and tracks is extensive. The game drive experience isn’t as liberal as one might find in many private reserves, but is more flexible than one might experience in other national parks.

Friday-Saturday, September 1-2: Due to limited flight options traveling to Lusaka, participants may have to leave home as early as two days prior to our arrival date. 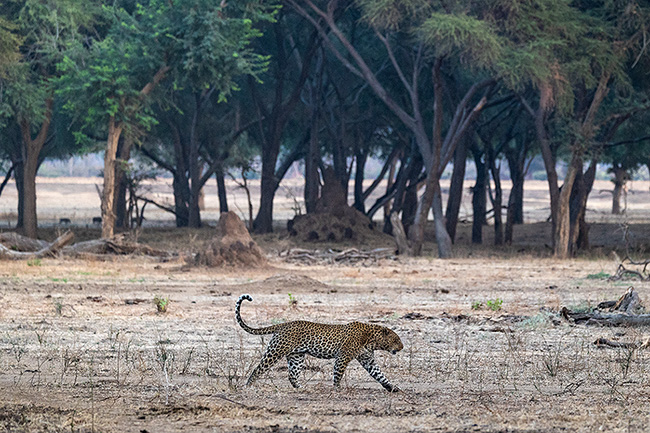 The beautiful winterthorn forest of the Lower Zambezi hosts all manner of wildlife.

September 3: Fly into Lower Zambezi National Park. Head to Chongwe River Camp, a 2+ hour drive which doubles as our first game drive. This camp might be the loveliest of any of our camp settings. Tents are situated overlooking a side canal of the Zambezi. Tall trees dot the camp, providing shade. Elephants commonly walk through, along with other browsers. Hippos may come up and graze on the grounds at night. We’ll likely have our first night drive, and may well see our first civets and genets, owls, and other nocturnal critters.

September 4: Our first morning game drive will take us into the forests and bush. The landscape is reminiscent of the Greater Kruger in some places, but in general the bush is not as thick. The tall trees are a notable difference, with much less low vegetation, making for more open sightlines and nice “animalscape” opportunities. Elephants will be everywhere. In the afternoon, we’ll head out on the river to look for hippos, swimming elephants and birds (herons, kingfishers, fish eagles, etc.). Night drive on the way back.

September 5: Our morning drive will take us back into the bush, possibly heading up toward the mountainous areas that are home to the Samango monkey, hyrax, and other wildlife. At midday, we’ll depart (on the river, probably) to our next camp: Tusk & Mane. Situated on the river’s edge, this is an exclusive camp for our group. It will also be the most rustic: basic tents, bucket showers… but the setting and privacy should make for a wonderful experience. It’s situated in my favorite location of the entire trip: close to the most scenic winterthorn forests and the wild dogs.

September 6 – 8: We’ll spend our time here on game drives (wild dogs, leopards, lions, elephants and general game), night drives (the aforementioned species), and exploring the river. Though wildlife is not overflowing in terms of variety, this location is the most scenic of the entire trip, so we will do our best to take advantage of the magnificent woodland, and more open plains (good for sunrise/sunset). We’ll also be sure to get back out on the river at least one more time. 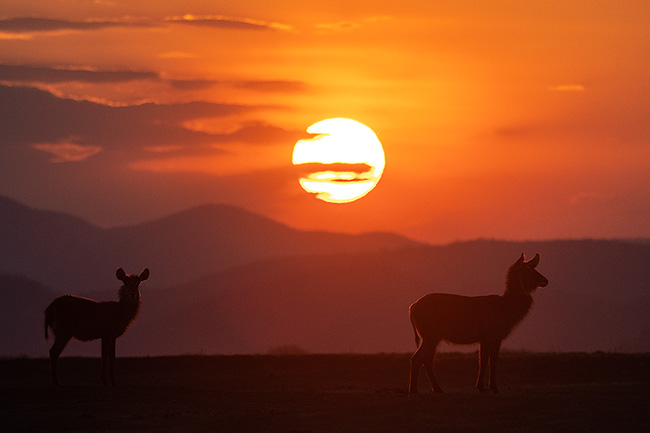 A mix of forest, river and open plain gives us an opportunity for a variety of wonderful settings.

September 9: Following a morning drive, we will transfer to the nearest airstrip, where will fly to South Luangwa National Park (possibly via Lusaka, if direct flights aren’t available).

We will arrive at Time + Tide Mchenja Camp in the evening, in time for dinner. Mchenja is perched on the sandy banks of the Luangwa River in one of the best wildlife hot spots in the entire park.

September 10: We’ll head out to explore this area of South Luangwa. We’ll be seeking out leopards, lions, and wild dogs. “New” species here will include puku antelope, Thornicroft’s giraffe, Cookson’s wildebeest, Crawshay’s zebra, and yellow baboon. Carmine bee-eaters are numerous, as the nesting season is starting around this time. We’ll continue to search for Pel’s Fishing Owl.

September 11: Following our morning game drive, we will transfer to Lion Camp, which is close by and is our final camp for this trip. Lion Camp is the nicest camp on this trip in terms of luxury (including solid internet and air conditioning in the rooms). Lion Camp is situated in the same general area as Mchenja. Again, this is something of a hot spot, with some well-known leopards and lion prides calling the area home, so it’ll serve as a good home base for us. During night drives, we’ll look for leopard, owl, and other oddities (chameleons!).

What’s Included in the Price of Your Tour

What is NOT Included in the Price of Your Tour

This tour is limited to eight guests. There are five spots left.

We have space for a single female traveler who is interested in sharing lodging. This means no single supplement!

If you are interested in booking a private tour for your group, feel free to get in touch and I’ll be happy to discuss options.

We recommend World Nomads travel insurance to our clients: