The Perks of Being a Professional Wildlife Photographer

Max Waugh > Musings > The Perks of Being a Professional Wildlife Photographer

In the past, I’ve written about how this job isn’t always as exciting as people think.  Or how there are drawbacks to a gig that requires you to travel endlessly over the course of several months.

One might think I’m complaining.  I’m not, I promise.  But those articles do illustrate that even a “dream job” requires a lot of hard, redundant and sometimes boring work that balances the immense rewards we reap as professional photographers.  Still, just in case I gave the impression that I don’t enjoy my profession, it may be time for me to list a few of the perks of being a wildlife photographer.

You can probably think of some of the obvious aspects of the gig that are really enjoyable: getting to travel to exotic locations, working with wildlife, setting my own schedule… However, there are added benefits as well.

I chose the perfect year to be on the road more than I stayed home, missing maybe 75% of the political machinations leading up to the 2016 US presidential election.  I generally disdain politics anyway, but as you know, this year was particularly bloated with added nonsense.  Unfortunately, it’s nearly impossible to shut one’s self off completely from world news and happenings back home.  Even the remote research station I like to visit in Costa Rica has wifi.  So I still had an inkling of what was happening, but I was able to avoid quite a bit of the silliness that made its way to the airwaves.

Some day, I want to go green.  I would love to trade in my reliable, beloved Honda Accord for an electric car and eliminate the need to rely on gasoline.  But I’ve realized that since I started working full time as a photographer and traveling more, I’m hardly putting any miles on my car.  The cost of a new vehicle doesn’t make sense at the moment because I’d hardly use it!  In the meantime, I’m saving a fair amount of money on fuel since I don’t have to leave the home office very often.

That’s not to say my carbon footprint is where I’d like it to be.  During many of my trips, I’m still riding around in a gas-powered vehicle, be it a car or tour van in Yellowstone (where, incidentally, I get great gas mileage thanks to slow, steady speeds during game drives), a Land Rover in Africa or a boat in British Columbia.  And of course, flying overseas means I’m paying for my share of airline fuel.  So it’s going to be a while before I’m emission free, but I have managed to eliminate 75% of my city driving.  It’s a step in the right direction.

The whole reason my website exists in the first place, the reason I’ve been writing all those trip reports for the last decade, and one of the main motivations for leading photo tours is that I enjoy sharing the world with other people.  A lot of folks may never get a chance to visit the wild places I’ve explored, so I try and share a lot of photos—even if they’re not always “portfolio quality”—to give my audience a better sense of the fascinating creatures and places that exist outside our familiar civilized bubbles. 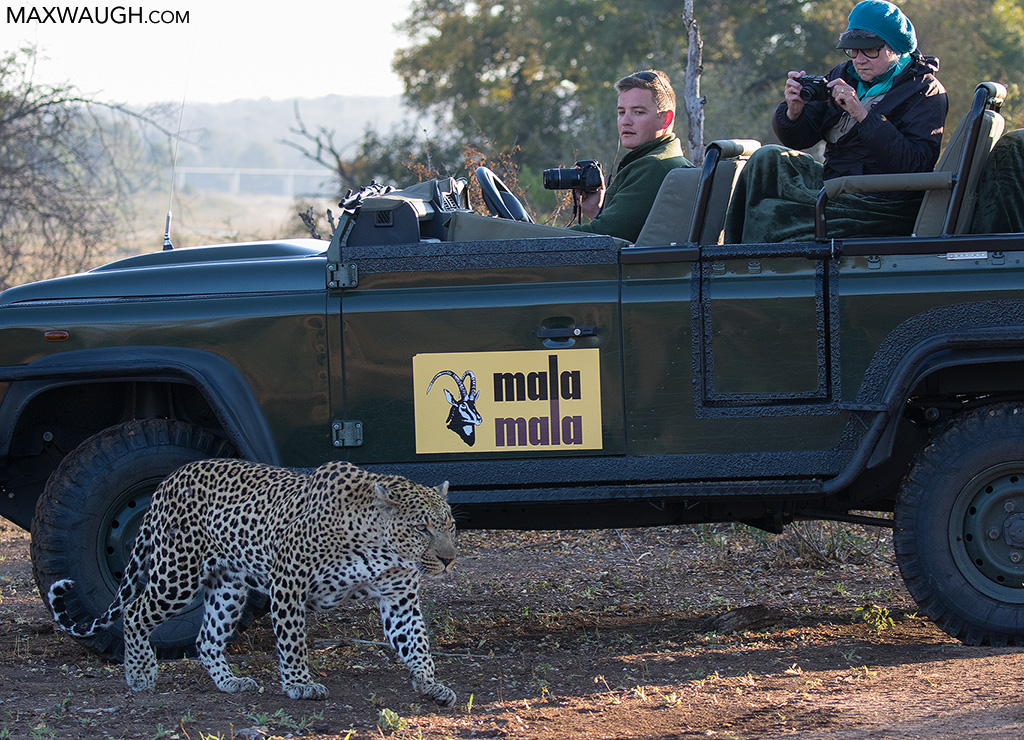 In August, my clients got a better understanding of why I love to look for wildlife at MalaMala.

Those that are able to enjoy nature-themed travel often want to maximize the limited opportunities presented to them.  Sometimes we, as travelers, only get a week or two on the road to explore.  As a guide, it’s my job to help make the investment in that time as fruitful as possible.  Yes, there’s pressure to come through, but it’s extremely rewarding to share the types of wild encounters that I’ve previously enjoyed on my own with others.  Often times, the satisfaction comes from fulfilling a client’s specific goal (often a particular animal they’ve always wanted to see and photograph).  Selfishly, it’s rewarding when my instincts as a guide and “expert” pay off with a great sighting or better photo op, if I’ve managed to put my guests in the right place at the right time.  But even smaller moments, like introducing someone to an unfamiliar species or teaching them about interesting animal behavior, can be really fun.

Exploring My Own Backyard

When I was only a part-time photographer traveling on my own, I was always looking into the distance, trying to decide which far-flung location I wanted to visit next with my limited vacation time.  I equated photography with adventure (and still do, by the way), so my travel goals usually involved places that were different, unfamiliar and wild.  The tropical rainforests of Costa Rica or the Amazon?  My first African safari experience?  The rugged and beautiful landscapes of New Zealand?  I checked all of these places off my list eventually.  What I wasn’t doing was looking closer to home.  I grew up in the Pacific Northwest.  My parents forced the outdoors on me at a young age, so I knew how beautiful my immediate surroundings were.  But it certainly wasn’t exotic.  It was familiar.  Maybe I even felt it was boring.  One thing’s for certain: I underrated most of what my extended back yard had to offer.

Ever since I switched to photography full time, greater freedom in my schedule has allowed me to start changing that attitude.  Slowly, I admit, but I’ve had many more opportunities to get out and explore locally, discovering places I wish I’d known about long ago.  Since I may never become a fully-converted landscape photographer, it’s still difficult for me to invest times in some of our most beautiful areas.  The Olympic Peninsula, Mt. Rainier and even the Palouse are all gorgeous destinations in this state to which I’ve devoted far too little time.  But when I’m “all about the wildlife,” it’s tough to invest a lot of time pointing my lens at trees, rivers and fields.  So instead, I’ve managed to start discovering more local haunts that offer decent wildlife opportunities.  It probably helps that I’m open to bird photography and slightly obsessed with owls, because this region is great for raptor photography at certain times of year.  Photographing Short-eared owls in the Skagit Valley has become a favorite pastime, and there’s a huge thrill that comes with tracking down more elusive species.  Well-hidden owls like the tiny Northern saw-whet or Northern pygmy are a rare treat.  But I even have fun finding the larger and more common Barred owl, right here in a local city park. 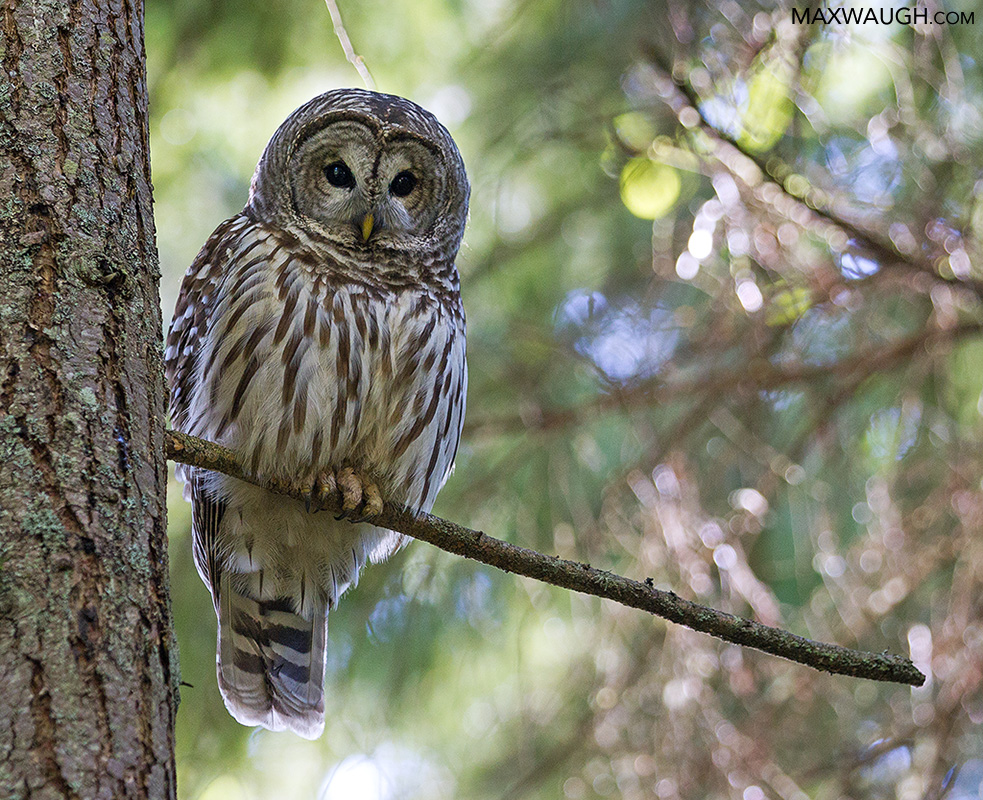 Barred owls can be found in the heart of the city, something I never realized before I started exploring locally.

There’s a lot I still don’t know about western Washington and the Pacific Northwest, and I’ll probably never fully devote enough time and effort to getting to know my back yard, but just in the last six years I’ve come a long way.

One of the greatest benefits of this job was also, perhaps, the least expected.  Though I knew I probably had the right temperament and personality for guiding and working with strangers on extended tours, I didn’t realize there was a good chance of establishing some long-lasting relationships and close friendships with many of my guests.

I do feel fortunate to have had wonderful clients nearly every time out.  These are people who are patient, friendly, willing to work with their fellow tour participants and open to new experiences.  They’ve been enthusiastic, dedicated and eager to sometimes put in long hours to achieve their goals.  And when things don’t go our way, they’ve maintained a great attitude.  So I suppose it’s not really that surprising that I’ve gotten along so well with them.  Though a lot of gratification comes from finding and sharing experiences with my guests, it’s also very satisfying to see a group of strangers come together, spend a week (or more) crammed in a small vehicle and having so much fun together. 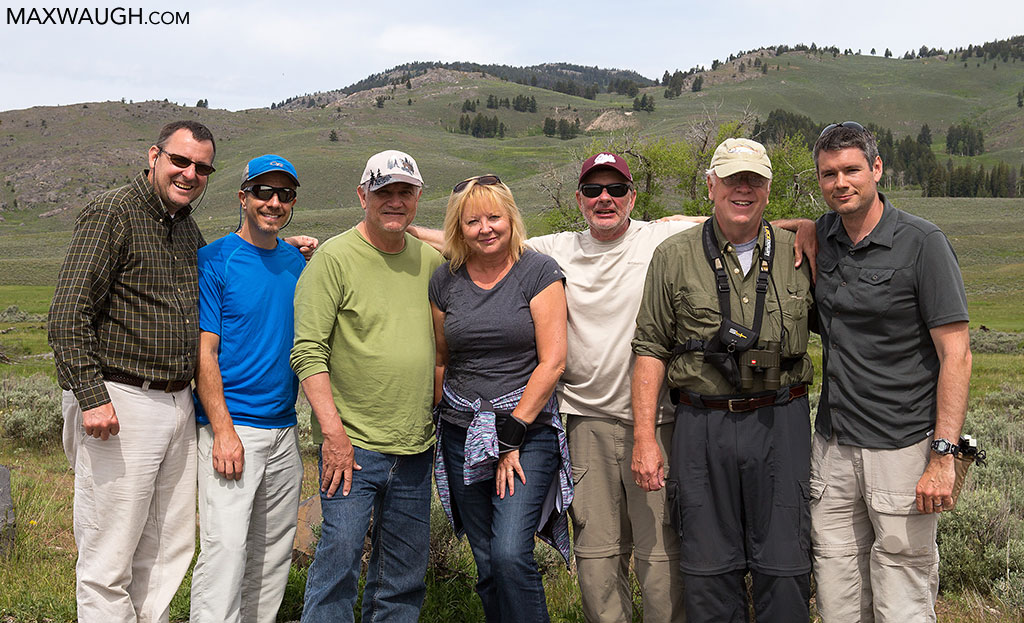 Nearly everyone on this trip has traveled with me again or discussed a future trip. It’s great to share more wild experiences with new friends!

Perhaps it’s for this reason that I’ve had a number of repeat clients.  Some have been on as many as three or four trips with me, which I never would have anticipated when I was just starting out, and over the course of that time we’ve managed to strike up friendships that extend beyond just the tour environment.  And because I’m not generally secretive or selfish about sharing information, I’m managed to keep in touch with many clients who have not returned on tour.  Often I’m happy to offer advice to folks who decide they want to plan their own trips in the future.  It’s allowed many people to return to some of these places of “mutual interest,” and has given us a chance to spend time together away from the cameras and lenses.

Coming away from the end of a tour with a long term friendship is much more satisfying than landing a big gratuity!